The firm led by architects David Neuhäusl and Matěj Hunal has created a very small but perfectly functional house in Prague. The show-piece is the 20-square-metre kitchen-living room, where we find all the comforts, thanks to a truly rational interior design. 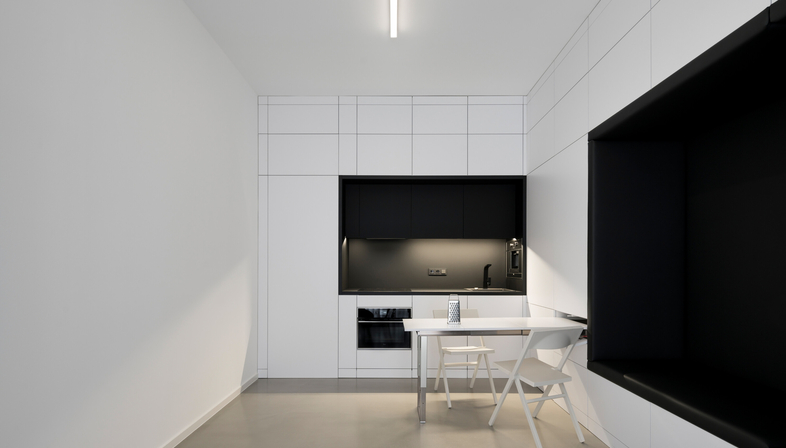 The trend towards micro houses continues despite the fact that the pandemic has made us understand that having a few square metres more does not hurt. While on the one hand we know that the square footage of a home is an important aspect for ensuring comfort, we are also aware that due to the lack of habitable and payable spaces in many cities, the proliferation of mini-apartments continues. And if we want to limit our environmental impact, a reduction in living space is certainly desirable.
In Prague, the Neuhäusl Hunal architecture studio has created the interior design of a decidedly "micro" apartment, where everything revolves around the kitchen-living room measuring just 20 square metres and characterised, as the architects put it, by a "Swiss army knife" rationality.
Making the most of the available space is becoming the litmus test for many projects designed in cities, where each square metre has its own economic weight. And if we look at Prague’s numbers, we see that the capital of the Czech Republic continues to grow at a brisk pace: in the first half of this year, 6,286 people were added to the city’s register. Indeed, at the end of June, Prague had a population of 1.341 million residents (source: https://praguemorning.cz/pragues-population-has-grown-by-six-thousand-new-residents-in-the-first-half-of-the-year/).
In this context, the solution proposed by architects David Neuhäusl and Matěj Hunal is an interesting one, as it makes it possible to concentrate maximum comfort in a small space.
Let’s take a closer look at their design proposal.
The brief of the customer and owner of a modest size house was to be able to have a kitchen, a dining room and a living room in a single walkable space of just 20 square metres. The three-in-one, one of those requests that seem impossible, but which are able to trigger that innate sense of pride and inventiveness of architects. The two young designers thus did not hesitate to propose a radical concept of absolute minimalism for this multifunctional environment. Their solution lies in a single piece of furniture.
A compact block that encompasses all those functions necessary to be able to live such a space to the fullest: a full kitchen, a coffee machine, a refrigerator, a dining table and chairs, a sofa for relaxation, a projector, a footrest, coffee tables, beautiful lighting and of course some storage room, as well as the doors to access the private part of the apartment, in other words the bedroom.
The furniture has been seamlessly inserted into the room where it occupies three walls, like a second skin. Conceived as a neutral white background, it contains everything that the clients have asked for. The environment is uniquely created depending on the use of the individual options, as the character and atmosphere of the space are naturally defined by the current activity. If a certain activity is not being carried out at a particular point in time – so if for example I am not cooking – it remains hidden and does not unnecessarily occupy the already small area.
Thanks to the choice of light and smooth surfaces, the free space is visually maximised. The empty volumes of the kitchen and sofa have been intentionally contrasted: black emphasises the minimalist character of the intervention, while the free wall serves as a projection screen.
Neuhäusl Hunal propose a sort of machine for living in, as already conceived by Le Corbusier, proving that if you know how to adapt them in harmony with the spirit of the time – as did the young Czech architects – certain ideas are truly timeless. 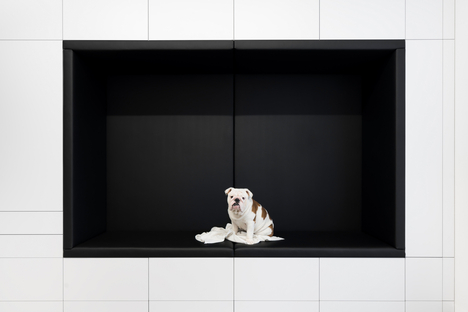 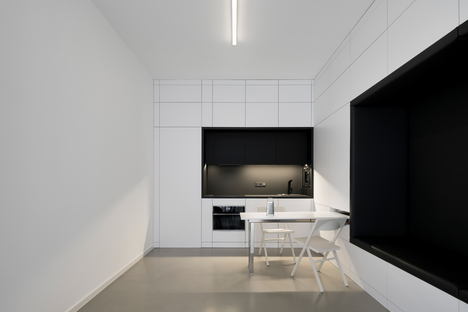 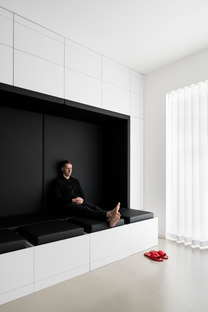 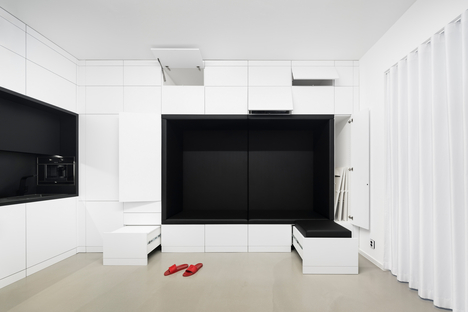 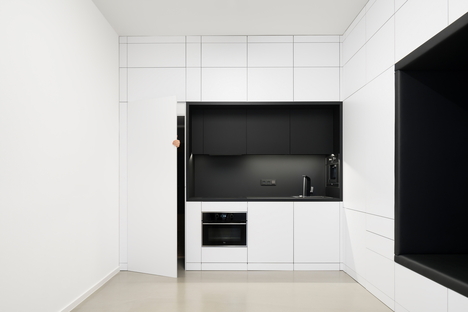 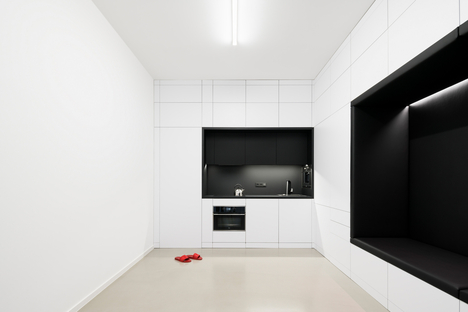 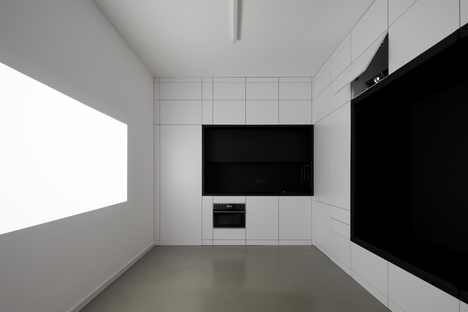 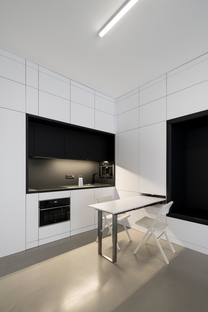 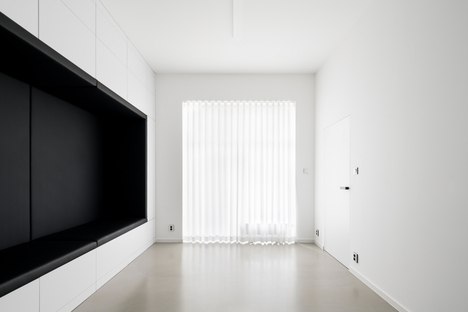