At Karlsruhe Castle, Germany, the light festival Schlosslichtspiele was created as a cooperation between Karlsruhe Marketing und Event GmbH and the ZKM | Zentrum für Kunst und Medien Karlsruhe. Curated by Peter Weibel, artistic and scientific director of the ZKM, Schlosslichtspiele 2022 celebrates its eighth edition under the title Music4Life. 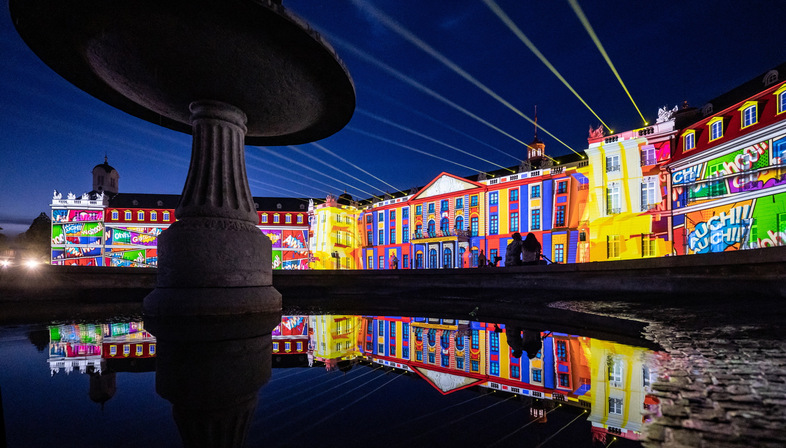 Video mapping is a highly appealing artistic expression because it combines various elements, such as visual arts, light, architecture and - in Karlsruhe, with the Schlosslichtspiele 2022 - also music. Video mapping is an art that requires not only creative flair but also excellent knowledge of technology and architecture, as it is a mapping technique that projects an image onto a three-dimensional object, matching it precisely in terms of pixels.
It is no coincidence that this festival takes place in Karlsruhe. This city is the only one in Germany to hold the title of Unesco City of Multimedia Arts and where the ZKM | Zentrum für Kunst und Medien Karlsruhe was founded in 1989 to bring the classical arts into the digital age. This is why it is sometimes referred to as the 'electronic or digital Bauhaus', an expression attributed to the director and founder Heinrich Klotz.
We leave the floor to Peter Weibel, curator of the festival and artistic and scientific director of the ZKM Karlsruhe, who sums up the event's significance as follows: "With its many international artists, the festival realises the ideal of diversity and art for all. They do not take place in the closed space of a museum but the open air and are completely open to the public. The central experience of the SCHLOSSLICHTSPIELE is projection mapping, the triumph of virtual fantasy architecture over the real thing. This high-tech media art frees people from the prison of the here and now. This year's motto is 'Music4Life', because music has a similar function to visual art and religion. Music is religion for the ears, just as light shows are music for the eyes."
The spectacle, in this case, is projected onto the façade of Karlsruhe Castle, built between 1715 and 1718, for almost 200 years. It was the residence and seat of government of the margraves, later the prince-electors and grand dukes of Baden. The castle is the centre of the city layout formed by 32 radial streets, a 'fan' characterising the urban fabric.
On its 170-metre-wide castle façade, from 18 August until 18 September, always at 9.15 p.m., one can therefore admire projections by international artists, all under the motto Music4Life. Music is, in fact, one of the expressive sources of the joy of life and thus predestined to be the theme of an event under the banner of creativity and beauty.
There are six new visual works. These include the show Resilience by the winners of the BBBank Prize in Projection Mapping 2022, French Atelier v3. Other prize winners, such as Leonie Oridt (Germany, Reframing the Structures) and Hotaru Visual Guerrilla (Spain, Plethora), are present with short contributions. Added to this is GenER/REations by the Hungarian artist collective Maxin10sity, which transforms the baroque façade into a retro-futuristic jukebox, taking viewers on a journey through the centuries of music.
Also interesting is the musical part involving Peter Weibel himself with the work "Wir Menschen sind Fische im Exil" (We Humans are Fish in Exile), created in collaboration with Niklas Völzow, whose musical narration is dedicated to the eternal cycle of creation and destruction. Finally, the video work "ODE. Im Lauf der Zeit "was created especially for the festival. (ODE. With the passing of time), by composer Detlef Heusinger, proposes a journey through the history of ideas in Europe, from antiquity to the present day.
If you pass through Karlsruhe, the Schlosslichtspiele is an event you shouldn't miss. 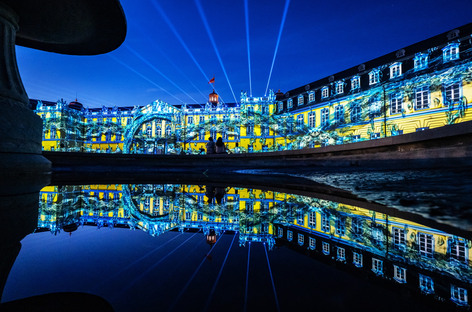 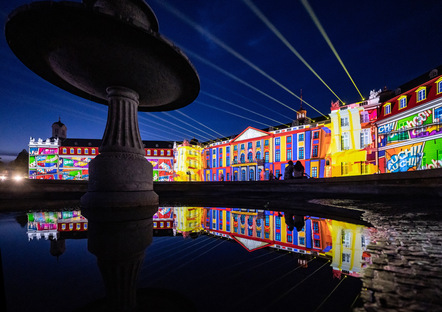 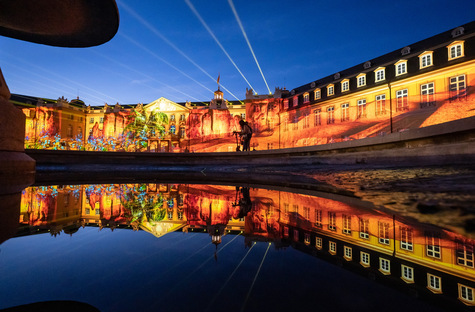 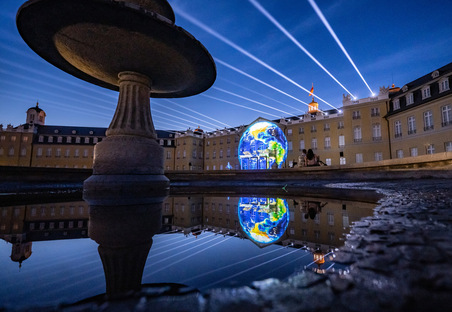 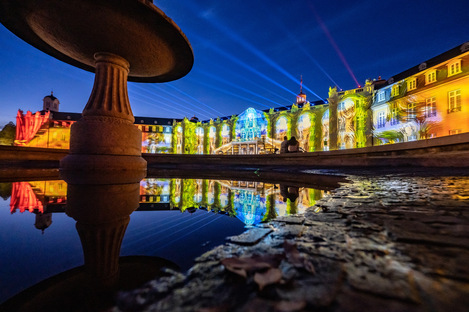 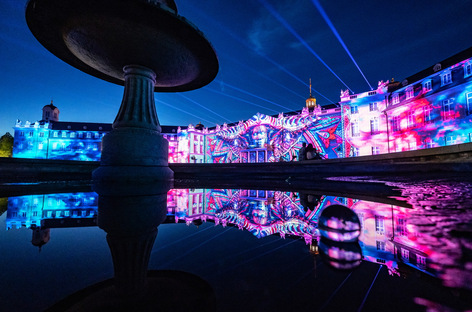