New York-based architecture firm WORKac, featuring at SpazioFMG in Milan on 13 September 2018 has made a key contribution to the Miami Design District, transforming a multi-storey garage into a work of art, the Miami Museum Garage. 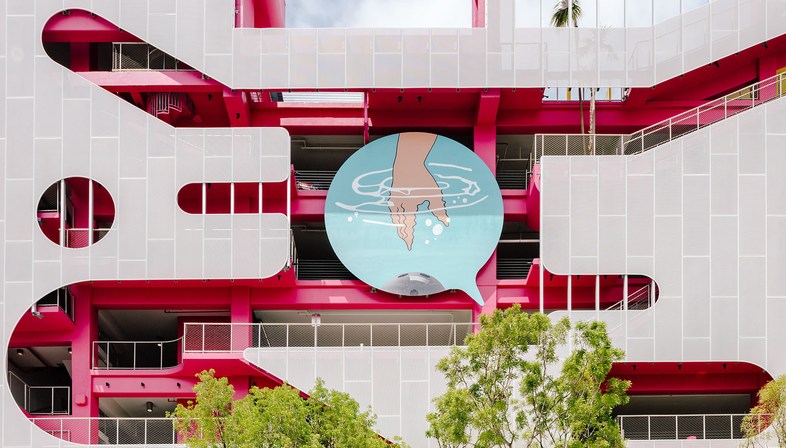 New York-based architecture firm WORKac, featuring at SpazioFMG in Milan on 13 September 2018 has made a key contribution to the Miami Design District, transforming a multi-storey garage into a work of art, the Miami Museum Garage.


In the run-up to the autumn season launch of The Architects Series at SpazioFMG on 13 September 2018, we showcased the schoolyard garden with kitchen and greenhouse - Edible Schoolyard NY PS216 (link) - in Brooklyn. It was designed by New York-based architecture firm WORKac, whose co-founder Dan Wood will be participating at the event and now we're showcasing another of their projects, Miami Museum Garage.
A small project with a huge visual impact by WORKac, whose design team once again demonstrate their great skill in dealing with difficult urban places. Because let's be honest, we would be hard put to find spaces that are less inviting than a multi-storey parking garage. Often they are functional but ugly containers, certainly not showpieces for the city, with a few rare exceptions. One of these exceptions is the Museum Garage in Miami's famous Design District, which opened a few months ago, in April 2018 to be exact.
Craig Robins, the CEO of Dacra Development and the visionary behind the Design District, an art, fashion, and architectural playground near Downtown Miami commissioned this latest project in the district. Museum Garage is a seven-storey building that can house up to 800 cars. The vastly differing facades were designed by five different architecture firms to turn this garage into the most fascinating piece of architecture in Miami.
Each architect - WORKac, along with Nicolas Buffe, Terry Riley, Clavel Arquitectos and Jurgen Mayer H - worked on one part of the Miami Museum Garage project without knowing what the others were doing. WORKac was given the narrowest part of the structure, where they created a totally unexpected vertical public space.
So, the facade they crafted became an additional element that gives new possibilities for interaction between passers-by and garage users, expanding the normally very restricted purpose of a garage - parking the car - to embrace recreational activities for the public. They even went so far as to include a bar, a carwash, DJ booth, lounges, a lending library and pop-up art space. The vertical spaces are accessible by stairs – and the occasional ladder – and it all extends down to the ground level with benches, a publicly accessible toilet, and a phone-charging station.
As part of the project's overall sustainability, WORKac also designed a water tank that collects rainwater from the roof drains to be reused as irrigation for a public garden.
In addition to the facade itself, WORKac created a small auditorium and beach space at the top of the parking garage since the use of the roof for parking is relatively rare in sunny Miami.
The facade by WORKac looks like a 3D landscape in bright, upbeat Miami Pink, where the connecting circulation and corridors visible from the outside give the illusion of people moving along like tiny ants intent on their work, and fun to observe. Basically, the exact opposite of what you would expect from what is such a typical urban no-man's land! 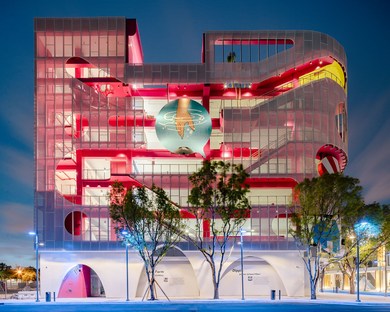 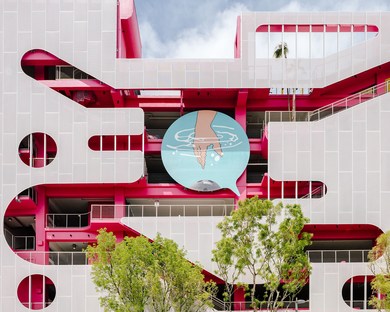 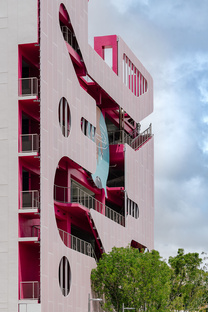 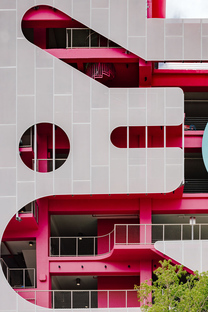 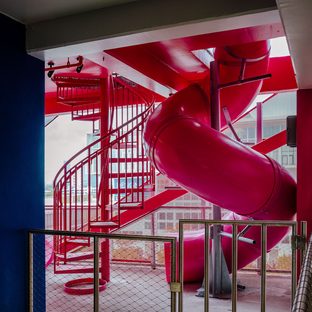