Compliance with the LEED Silver and Gold certification levels for the Apple research and development facility in Herzliya, Israel. 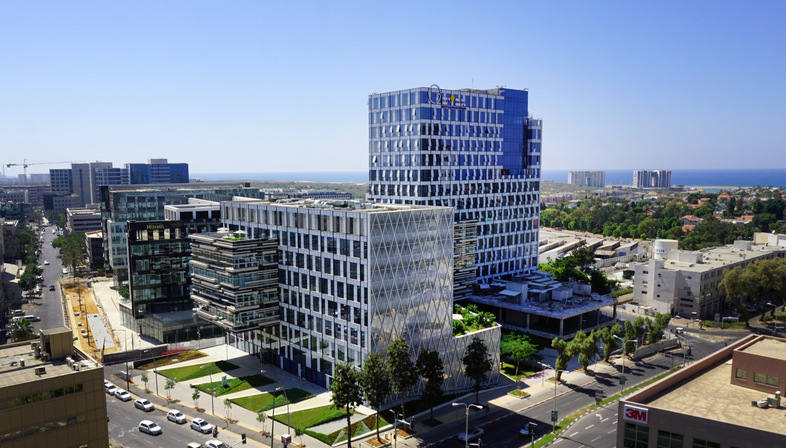 Compliance with the LEED Silver and Gold certification levels for the Apple research and development facility in Herzliya, Israel. The centre designed by Yashar Architects is formed of two buildings, constructed to meet green building standards.


Apple’s R&D centre, the company’s second largest development facility, is located in the heart of Herzliya, an affluent city in the central coast of Israel, at the Northern part of the Tel Aviv District, known for its robust start-up and entrepreneurial culture.
The offices were designed by one of Israel’s leading architecture firms, Yashar Architects. The office was founded in the 1950s by Itzhak Yashar and has designed some of the largest and most important public buildings in Tel Aviv, including the Tel Aviv Museum of Art, the Faculty of Arts building in Tel Aviv University, and the Dizengoff Centre. Adapting the company’s vision to the challenges of the 21st century, Yashar Architects, with Avner Yashar now at its helm, is focusing on high-density projects, becoming a leader in high rise design; the Apple R&D Center is an example of this.
The facility is composed of two separate buildings, joined by a floating volume containing a five-floor suspended atrium on one side and cantilevers some 10 metres over the building’s eastern entrance.
Each office building stands on a large platform that houses two levels of commercial space with large balconies for the building’s tenants. On the ground level, a public pedestrian walkway crosses between the two buildings, a landscape that includes an ecological pool and shaded seating under the trees. This public crossing connects to its neighbouring office building located to the south, and to the area beyond that. The building has been designed to high standards and includes high-speed elevators, four levels of underground parking, and a plush, light-filled lobby.
The very interesting building envelope consists of four types of curtain walls, each one with a different type of glazing in order to maximise indoor comfort. Most of the glass panels are printed with dots that filter the light to make it easier to work in comfort inside without sacrificing the view to the outside.
The new Apple R&D Center by Yashar Architects in Herzliya is a demonstration of the US-based giant’s commitment to social consciousness and the environment. Not by coincidence, the new facility is one of the most environmentally friendly ever built by Apple and one of the greenest in Israel: solar panels on the roof provide enough energy to supply the entire building’s hot-water requirements; a smart lighting system (with lights turning off automatically when people leave the room, etc.) reduces power usage by 25% and the climate control system has also been designed to consume 40% less electricity than comparable systems.
All these design touches that were applied from the early design stages mean that Apple’s new R&D Center by Yashar Architects can lay claim to US Green Building Council LEED certification at the Silver and Gold levels. 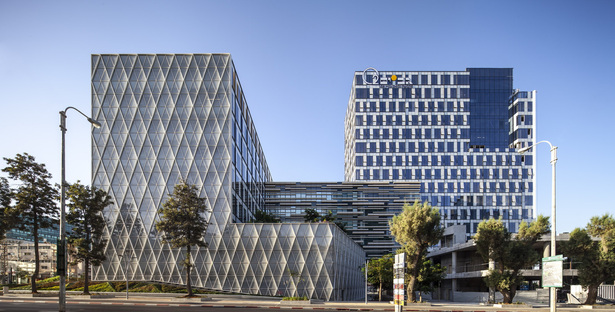 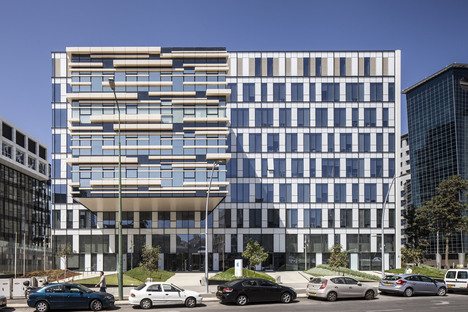 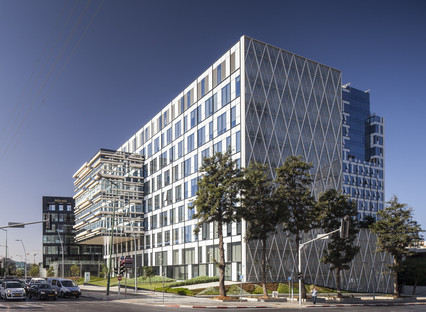 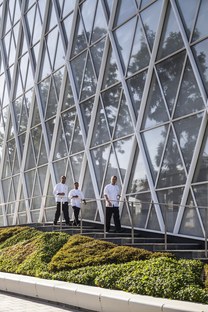 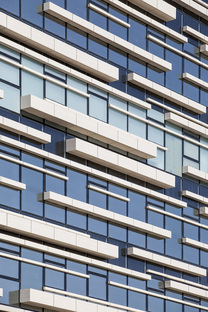 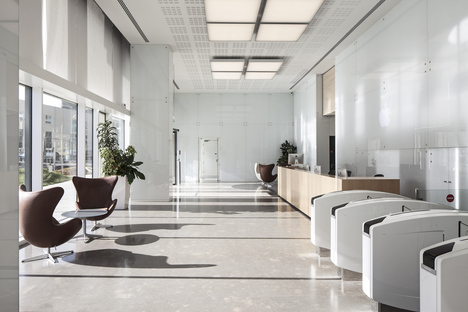 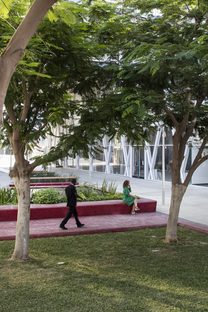