Impressions from the Art Souterrain Festival in Montreal

RESET is the theme of the 12th Art Souterrain Festival that decorates 5 km from Montreal's underground pedestrian network - a classic urban non-place - and seven off-path locations to present works of contemporary art by fifty-five local and international artists.

The theme of the underground art festival in Montreal could not have been more appropriate at this time: RESET. As the organisers say about it: “What if you could, by the press of a button erase everything, what would you do with this blank canvas? If you could start from nothing how would you imagine the world? Humanity is at a turning point. Should we persist in our habits or become aware of our repetitive way of life in order to rebuild from the ground up?”
The Art Souterrain Festival began on 29 February and ends on Saturday 22 March, at a time when the global Coronavirus is pressing the Reset button in our lives. 24 days during which this key event of the winter season in Montreal, has livened up the underground pedestrian network of the Canadian city as well as some off-path sites with works of contemporary art by fifty-five local and international artists.
To get a better grasp of the origins of this festival, we should know that RÉSO, commonly referred to as The Underground City (French: La Ville Souterraine), is the name applied to a series of interconnected office towers, hotels, shopping centres, residential and commercial complexes, convention halls, universities and performing arts venues that form the heart of Montreal's central business district, colloquially known as Downtown Montreal.  The name refers to the underground connections between the buildings that compose the network, in addition to the network's complete integration with the city's entirely underground rapid transit system, the Montreal Metro.
So, the works fit into environments that are part of Montreal’s daily routine, which the population lives and experiences every day without really taking much notice. Thanks to art, the four curators of this 12th edition of the festival - Juliette Bibasse (France), Marie Perrault (Canada), Dulce Pinzón (Mexico) and Lynn Bannon (Canada) - wanted to challenge the public to question the RESET concept, addressing the issue from various angles.
So, the presentation of the series called “Anarchitechture” by Olivier Ratsi centres around our perception of space, and the interpretation of our reality; REST-TOI, TOI-MÊME by artist Julie Piché, invites spectators to reflect on the proposal for the Festival theme RESET. The work called STOP Urgence! by the Les Nivaux group at the Palais des Congrès de Montréal asks visitors to take a pause and think about the future while a series of photos by Anna Ridler called Myriad (Tulips) is an installation made up of 10,000 polaroid photos of Dutch tulips. These images become a “data set” of another project by the artist that serves to train an algorithm so that it “learns” just like artificial intelligence.
The artist Martin Le Chevallier, particularly interested in the relationship between art and public space presents three rubbish sorting bins, a trio of everyday objects whose function is strangely diverted. Sabrina Ratté also presents a very interesting work: Undream depicts an imaginary future of collapsing utopia and dystopia.  This artwork is inspired by the photomontages created by Superstudio, a major player in the radical design and architecture movement of the 1960s. The RESET theme will also be addressed through artist Skawennati's films that can be seen in the shopping gallery of the Centre du Commerce Mondial de Montréal
The 12th edition of the Art Souterrain Festival with the prophetic title once again demonstrates the great communicative power of Art, that we hope will help stimulate us after this forced “reset” of our times. 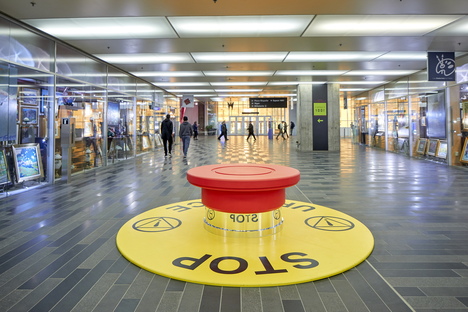