Circular economy and sustainability aren’t just buzzwords, they’re important issues that need to be addressed if we want to try and mitigate the climate crisis. The building industry has become increasingly aware of its impact, so for the Barcelona Building Construmat (BBConstrumat), Josep Ferrando Architecture developed a sustainable installation based on the criteria of the circular economy. 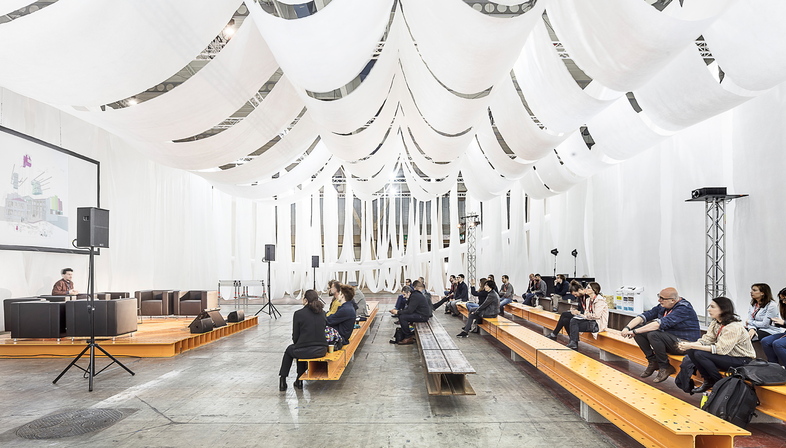 Considering the huge impact that the building industry has on the environment, we can only welcome everything that aims to minimise that impact. And, to put into practice, there’s no better way than to share a virtuous example of how the circular economy actually helps the environment during a major public event.
For this reason, BBConstrumat – the biennial building fair in Barcelona – already decided back in 2017 to make the commitment to present a transitory architecture project to make the visitor's experience more interesting. For 2019, the organisers invited the Catalan architect Josep Ferrando and his studio – which has lots of experience in the field of recyclable installations – to come up with a temporary intervention.
For the 34,000-square-metre area in the trade fair, and the Future Arena, the Talks Arena and the Meetings Arena, in particular, Josep Ferrando proposed an ephemeral architecture in keeping with the singular compositional dynamic that informs the practice’s work, starting out from a system that solves problems logically and economically, opting for recycling and reuse as its key concepts In short, a zero-waste installation!
Using just two materials, the architects created singular, seductive, functional spaces that meet the criteria of the circular economy. One is geotextiles, industrial fabrics with a standard format of 2.20 x 200 m, which will be reused later for their original function in roofing. For BBConstrumat, the long textile fabrics were used to shape the space by using tension to hang them from different heights.
The other material is huge metal girders, working under compression and stacked to different levels to create 45-cm high benches and 75-cm high tables, and other fittings. These girders previously served to transport the prefabricated units being used in the construction of Barcelona’s Sagrada Familia and returned to their original function after BBConstrumat closed.
Josep Ferrando’s project conveys what he defines as a universal tautology of construction. “Almost all spaces and almost all construction materials work in two ways: hanging, therefore in traction, or piled [sic], or under compression. Two ways of working, traction and compression, that have been historically present in architecture, from classic to contemporary buildings. Two ways of working in which lighter-weight elements, like the textiles, contrast with heavy elements, such as steel. The dialectic between lightweight and heavy, between transparent and opaque, has always been present, and this is what our intervention sets out to convey.” Of course, these skilfully combined elements also create a truly eye-catching visual experience without impacting on the environment because all the material was reused in the city’s construction sites! 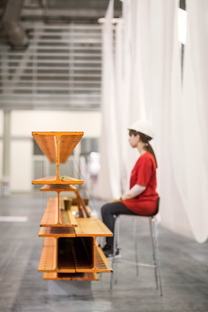 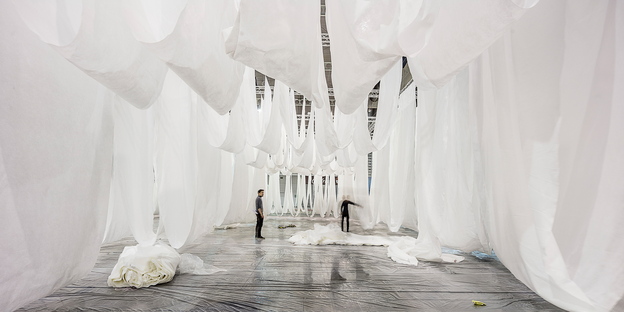 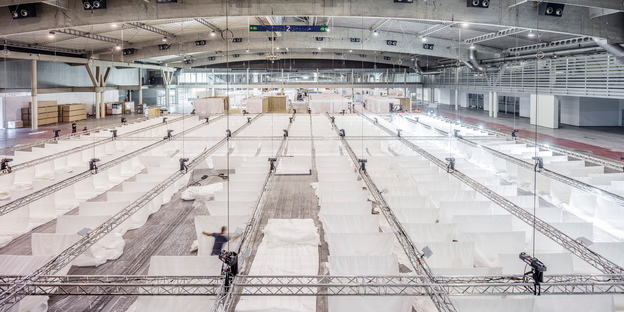 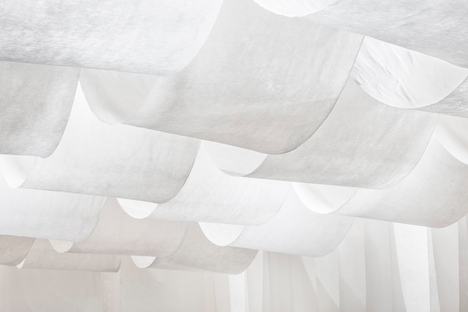