18 Shades of Gay by Claude Cormier, 2020 RAIC Award of Excellence

The Royal Architectural Institute of Canada (RAIC), the Canadian Institute of Planners (CIP), and the Canadian Society of Landscape Architects (CLSA) announced the 2020 National Urban Design Award winners, one of which is the landscape Claude Cormier with his work 18 Shades of Gay in the Urban Fragments category. 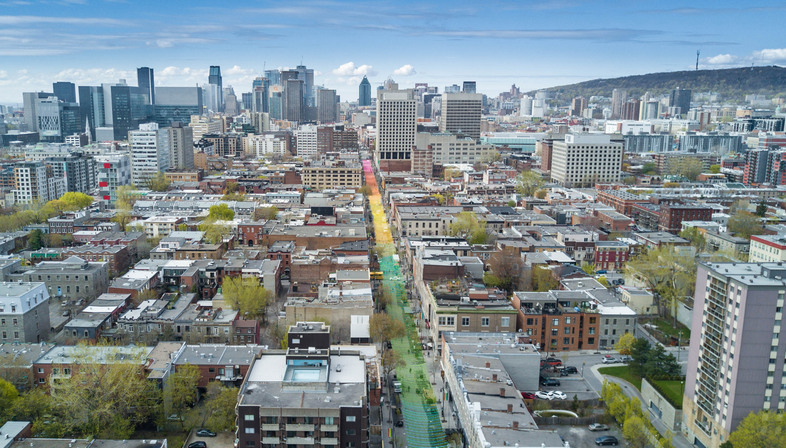 Claude Cormier is a Canadian landscape architect whose work has challenged ordinary perceptions of the world since the beginning of his career. Aware of the power of artifice as a counterpoint to nature, he has built his career around a modus operandi that he defines as “serious fun”, in other words, his colourful proposals are bold and daring, and are distinguished by a marked sense of humour. To pursue his idea and get across his message, he is just as happy to draw on the kitsch narrative as anything else because this speaks to our emotions, so, whether we like it or not, it is burnt into our minds.
There was no doubt that his work appeals to the general public and now renowned institutions like the Royal Architectural Institute of Canada (RAIC), the Canadian Institute of Planners (CIP), and the Canadian Society of Landscape Architects (CLSA), which organise the annual National Urban Design Award, have also awarded the work of Claude Cormier + Associés.
The project in question, 18 Shades of Gay, is a 1-kilometre-long, ribbon-like installation of 180,000 multicoloured resin balls suspended over Sainte-Catherine Street East in Montreal’s Gay Village and is part of the street’s transformation into a pedestrian mall during the summer.
It is the second iteration of an earlier project for Aires Libres a 5 month-long cultural happening in Montreal, that starts in the lively Gay Village and turns this strip into a pedestrian promenade every year from May to September. For this initiative, Claude Cornier upgraded the earlier “Pink Balls” installation of 170,000 plastic orbs in four subtle shades of pink suspended high above Sainte-Catherine Street East, turning this street with a somewhat shady reputation into a pedestrian zone, originally for a single summer but because it was so popular, and turned into a catalyst for economic and social development in this urban zone, the local council kept it going every year from 2011 to 2016, until Cormier decided to add even more colour for the 2017 edition of Aires Libres. So, he transformed Pink Balls into a flamboyant ribbon of colour, inspired by the rainbow of the LGBTQI community, calling it “18 Shades of Gay”. Divided across six principal colours, each one in three distinct hues for a total of 180,000 balls made from recycled plastic to create the 18 shades of colour suspended above the street. The result? A 1-kilometre-long rainbow ribbon that is as colourful by day as it is at night, hanging above the summer pedestrian zone of Sainte-Catherine Street East, in Montreal’s Gay Village between St-Hubert Street and Cartier Street.
And the citizens of Montreal don’t want 18 Shades of Gay to go away, and they’ve even turned the various colours into places, so people arrange to meet in the “yellow sector” or the like. This virtuous example of placemaking, with an artistic vision, is now the recipient of a 2020 National Urban Design Award in the Urban Fragments category. As the Jury says, "18 Shades of Gay more than met the criteria for this award — as a positive contribution to the public realm, exemplifying design excellence and innovation. The “ceiling“ of this 1 km outdoor room has been transformed into a full rainbow spectrum signifying gay pride. It defines the Gay Village, adds to 24-hour activity, supports the local economy, and successfully elevates an otherwise nondescript urban environment.” 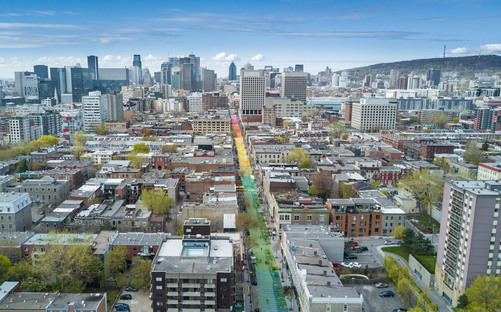 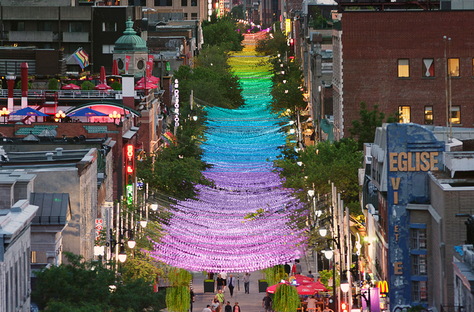 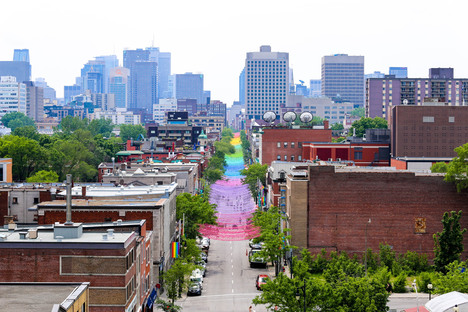 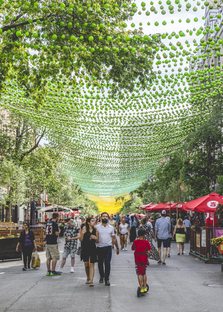 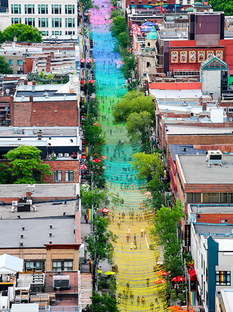 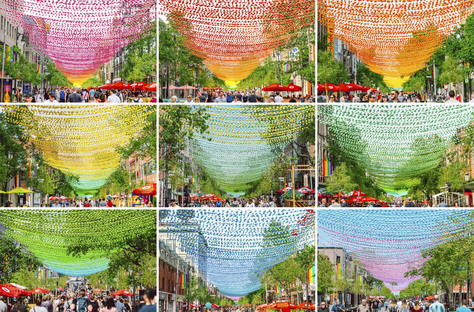