The courtyard and the garden are the keys to the project for expansion of Brunico Music School by Barozzi/Veiga, winners of a contest held in 2012. Restoration of the school’s historic location, Casa Ragen, offers Barozzi/Veiga an opportunity to reflect on the villa type construction in Brunico. Following a contest held by the City of Brunico in 2012, the music school’s historic home, Casa Ragen, was renovated and expanded by Italian/Spanish architectural studio Barozzi/Veiga, who won the contest. After two years of work, the renovation of the historic Casa Ragen was finally completed at the end of 2017, while the new building was expanded with a construction on a single level above ground plus an underground level embracing the garden beside the existing complex.
Music is a true institution in Brunico. Children traditionally begin to study music at the age of three, either spontaneously or in nursery school, and the music school located in Casa Ragen which has been the city’s principal musical institution since its foundation in 1985 always has a very high enrolment. It is a public building owned by the City, which decided to expand it in 2012 in response to growing interest in musical education.
After a contest that saw the participation of fully 267 entries from all over Europe, the city authorities chose Fabrizio Barozzi and Alberto Veiga’s project for the discretion with which they designed the annexed building and the respect they demonstrated for the need to protect the Casa Ragen complex as an artistic heritage building. In a well-preserved historic context including the adjacent parish church of Santa Maria Assunta and the cemetery, the new volume was inspired by the classic villa surrounded by a garden, the most common and best-preserved type of building in the small town of Brunico in Alto Adige. The very low cost of the fittings and overall building operation was the final factor determining the choice.
The Spanish studio’s intention was to build an expansion that would not challenge the primacy of the original Casa Ragen building, documented as far back as the thirteenth century. The theme of circularity, the enclosure and the symbolic embrace around a fulcrum of attention was already present in this historic villa, with its C-shaped floor plan built around a Renaissance covered cloister on three levels. Entirely restored, it was painted white to underline its lines and draw attention to the series of stone columns. Light from the roof is mitigated by a sunbreak system with adjustable slats.
As in many of the buildings in Brunico, white-painted brick with stone architraves and intradoses constitutes the stylistic key to the external walls of Casa Ragen, which were reclaimed, underlining the slightly splayed windows and bow windows.
Along Paul von Sternbach street, the historic building’s main façade continues into the adjacent new wall, plastered white with a glassed-in entrance from which the inner garden can be seen.
Going beyond the interpretation of expansion as construction of another building adjacent to the original one and drawing their inspiration from noble villas surrounded by gardens, Barozzi/Veiga design a building that surrounds the garden, creating an open private courtyard between Casa Ragen and its new classrooms. One floor high, extending out only for a few metres and made permeable by numerous windows onto the classrooms, the building is dematerialised as much as possible to become a simple border, a measurement for the definition of the space.
Observing the layout, Casa Ragen is the corner building in a triangular area designed by enlarging the floor plan of the first building. Another discrete homage to the existing buildings which the architects have translated into an architectural project of great relevance today. 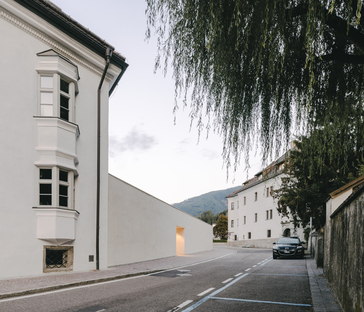 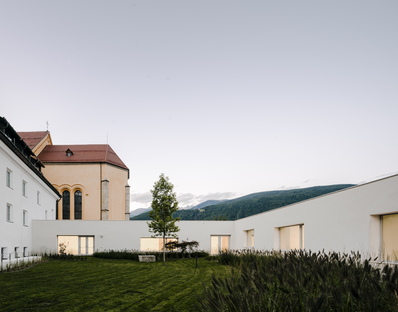 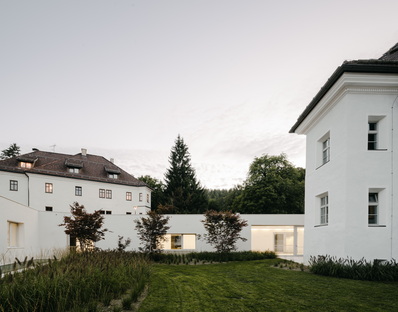 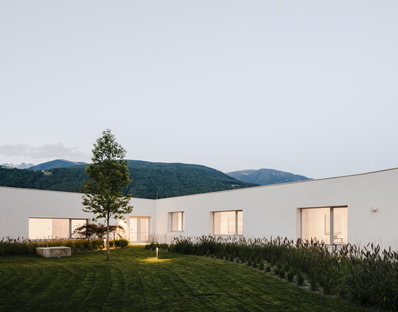 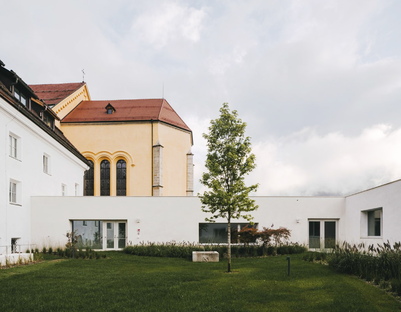 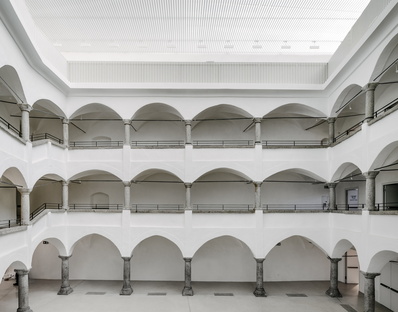 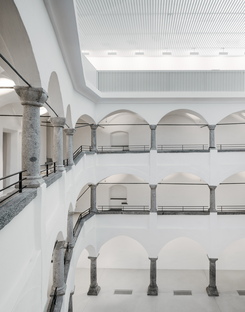 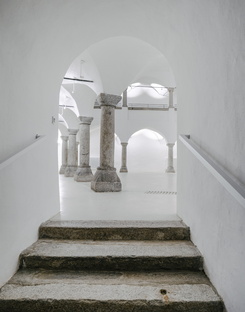 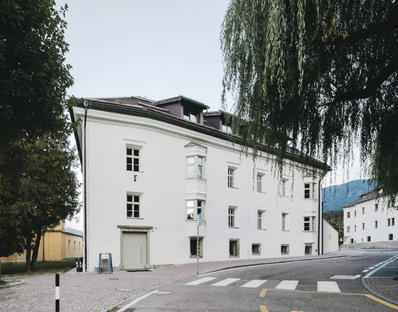 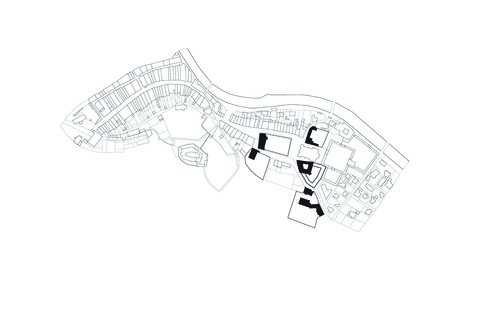 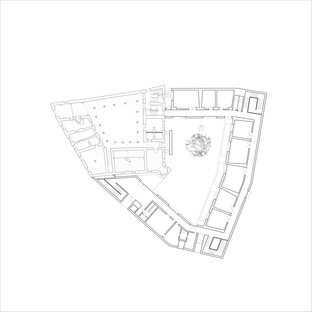 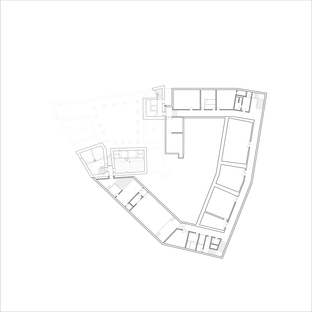 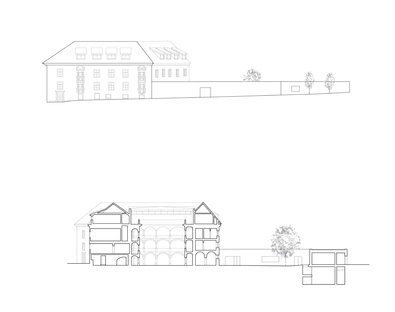