The winner of the competition held by the Province of Antwerp, Xaveer De Geyter has designed new premises for the public offices in the southern part of the city. A new energy-neutral landmark, a building that is both a tower and a bridge, rising above a redeveloped city park. 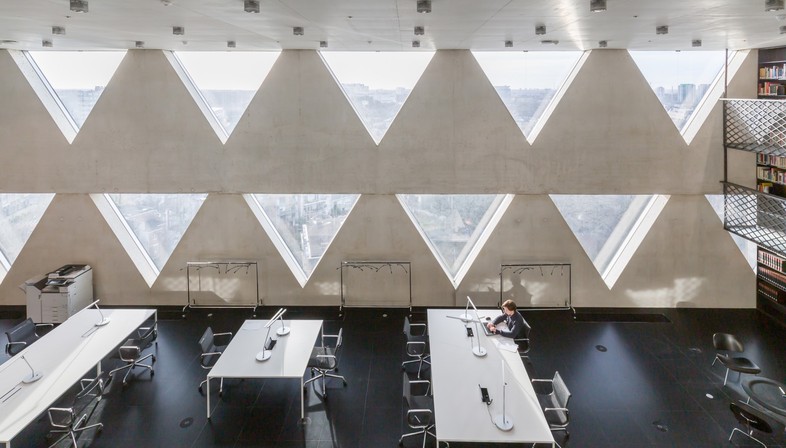 Xaveer De Geyter won the competition to design new premises for the administrative offices of the Province of Antwerp. The institutional function required of the new building completed in 2019 offered an opportunity for the Belgian studio to create a landmark in the southern part of the city, dialoguing with other key features of the cityscape.
Antwerp is a Flemish city famous for its old guildhalls on Grote Markt and its magnificent cathedral. In recent decades it has also become the home of the MAS Museum aan de Stroom designed by Neutelings Riedijk and of Zaha Hadid’s Havenhuis, two prominent buildings that give the city’s harbour area a new image. The presence of these two iconic buildings in the northern part of the city encouraged redevelopment of the southern end of the town as well, with a new building towering over neighbourhoods on a different, much smaller scale.
There was already a degree of verticality in the Modernist complex that previously housed the Antwerp Provinciehuis, a building consisting of three blocks with a central tower which occupied a large part of one of the few green areas in the city centre. But the construction in question was an anonymous office complex which had become obsolete in terms of energy consumption. The excessive cost of renovating the building led to the decision to knock it down and build a new construction with more space for public greenery, including a landscaping project connecting nearby Harmonie Park and Koning Albert Park to create a single island of greenery. The Province of Antwerp held a competition, which, according to Xaveer De Geyter Architects, left the possibility of preserving one of the original pavilions ambiguously open.
The winning project in the competition, the product of a partnership by a group of studios led by XDGA and including Bollinger + Grohmann, Boydens, Michel Desvigne Paysagistes for landscaping design, and Transsolar, has built a first volume which is both tower and bridge above a second prismatic volume symbolically and functionally serving as its base. This second volume, with a completely glassed-in concrete frame, alludes to the old office blocks in a subtle way, forming a connection between the new building and the memory of the site. This is XDGA’s only concession to the past, because the rest of the project for the new headquarters of the Province of Antwerp is a building in clearly contemporary style, standing out in the city park and the city as a whole.
The new Antwerp Province Headquarters are located in a rectangular white concrete structure which twists as it rises, with façades characterised by triangular windows at regular intervals that adapt to and underline this twist. The building not only looks different from different points of view, but is intended to be a kinetic sculpture on an architectural scale, impossible to capture all together in a single photograph.
The original idea of preserving one of the existing pavilions inspired the concept of a base similar to it in form, consisting of a glass block with a north-south orientation, above which the bridge-like tower is built with an east-west orientation. The partial twist of the building’s 14 floors rising almost 58 metres into the air also serves the practical purpose of reducing the shadow cast on the buildings around it. In structural terms, the problem is solved with steel girders crossing to form triangular modules which, while remaining concealed in the concrete, determine the rhythm and shape of the windows. Picking up on the A in the logo of the Province of Antwerp, the triangular windows strengthen the building’s symbolic power.
The client’s explicit intention was to create a building marking a turning point in the institutions, in the direction of energy efficiency and overall constructive and spatial quality. XDGA’s project is energy-neutral thanks to use of geothermal systems and sunbreaks on the windows, while the triangular shape applied to all the windows represents the most efficient way of establishing the ideal balance between the need for daylight and avoiding excess heat. In terms of impact on the landscape, the tower rises above a park where not only the existing trees were preserved, but new shrubs and low trees have been planted to create a big park with safe paths for pedestrians and cyclists.
In terms of the interior programme, public functions such as congress areas, exhibition spaces, a restaurant and a spacious rooftop terrace are all located in the glass block, while the tower contains office spaces and a semi-public library. The clear glass congress pavilion parallel to the street contains an auditorium, the council chamber, and a big open space for events and exhibitions, connected via a central spiral staircase of steel. The parking spots are all underground to free up as much space as possible for greenery and slow mobility.
In response to the client’s wishes, special attention was paid to the choice of materials for the interior design and the general finishes: all the walls are made of smooth black and white load-bearing concrete, cast on site. The floors in the congress pavilion are covered with untreated aluminium tiles, while the ceiling features a polycarbonate structure concealing technical components. The main council chamber is surrounded by white leather upholstered walls. 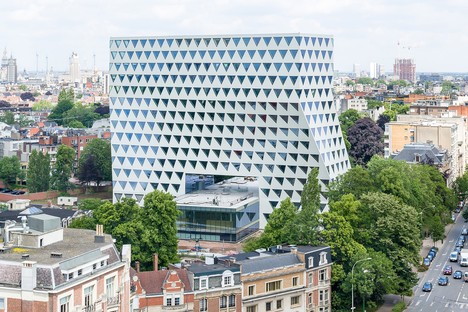 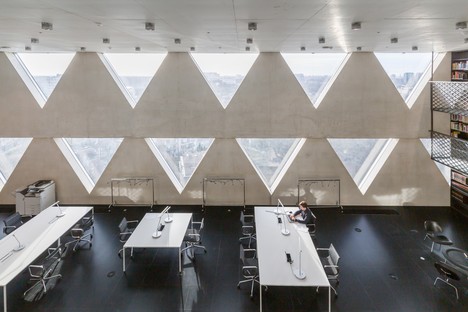 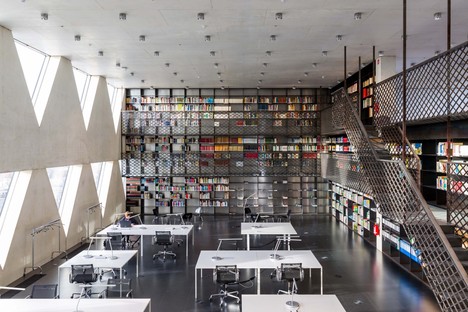 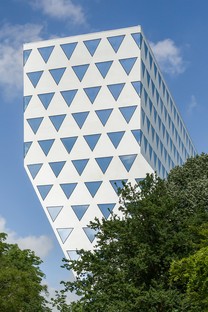 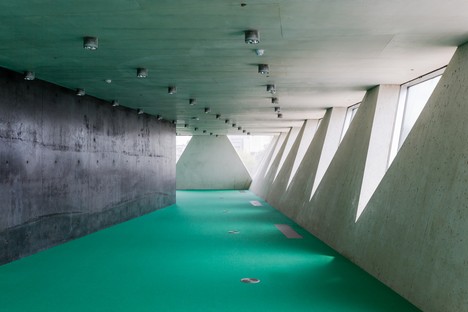 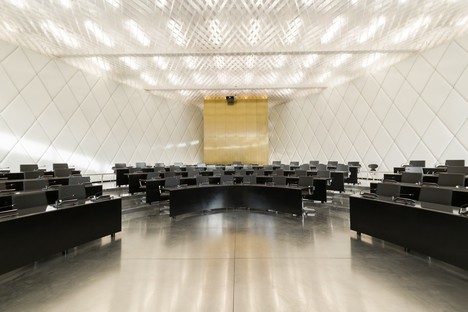 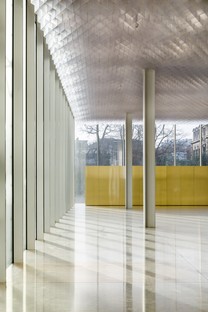 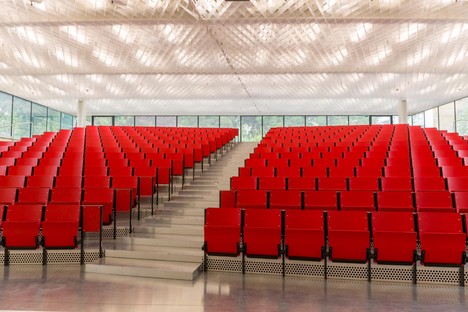 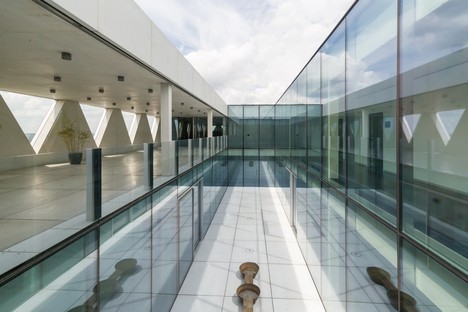 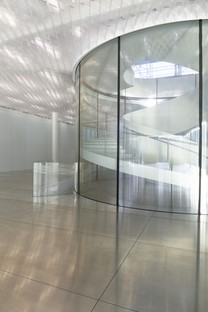 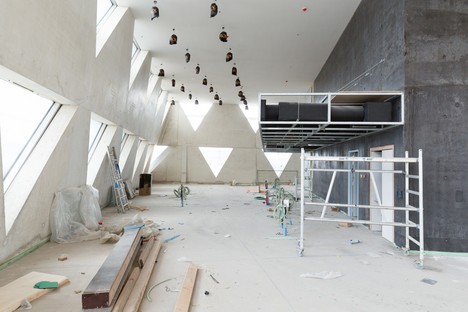 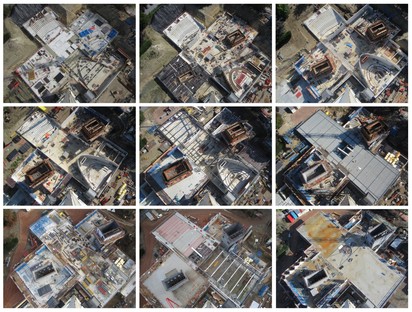 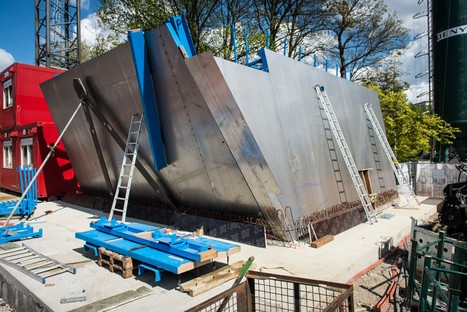 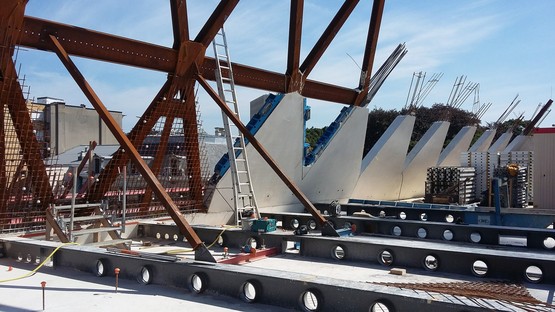 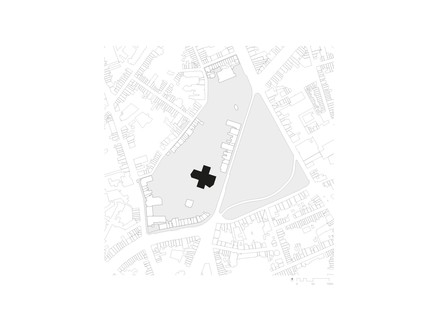 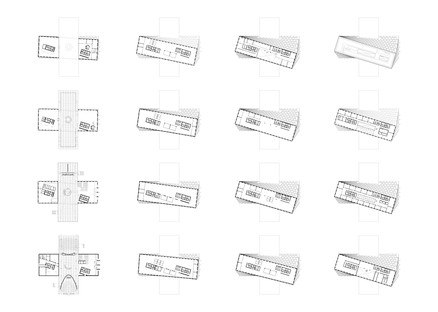 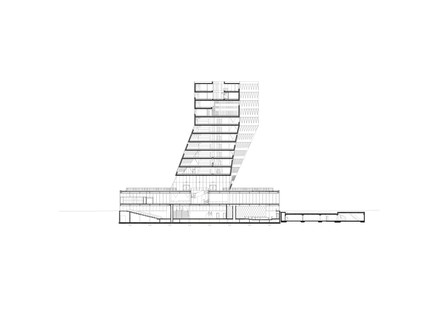 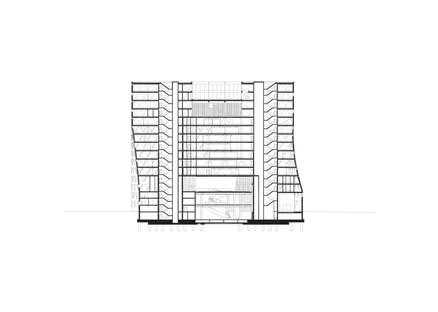 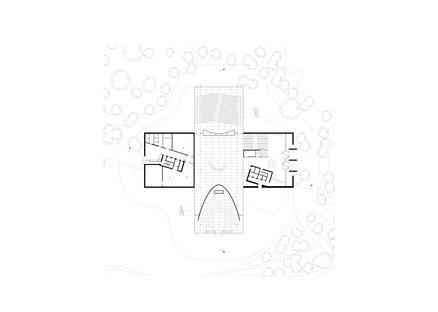 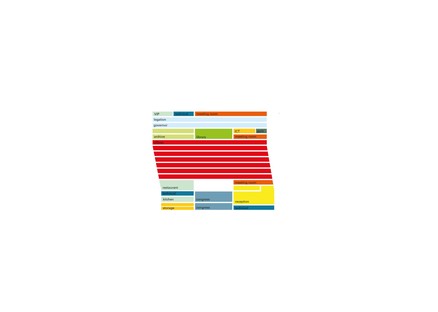