In this house on Lovelingstraat, Bovenbouw Architectuur has reinterpreted Antwerp’s 19th-century rooms with modern twists, creating timeless spaces. The strategy used to bring light into the interiors and the intermingling of old and modern styles are the focal points of this Belgian firm’s original design. 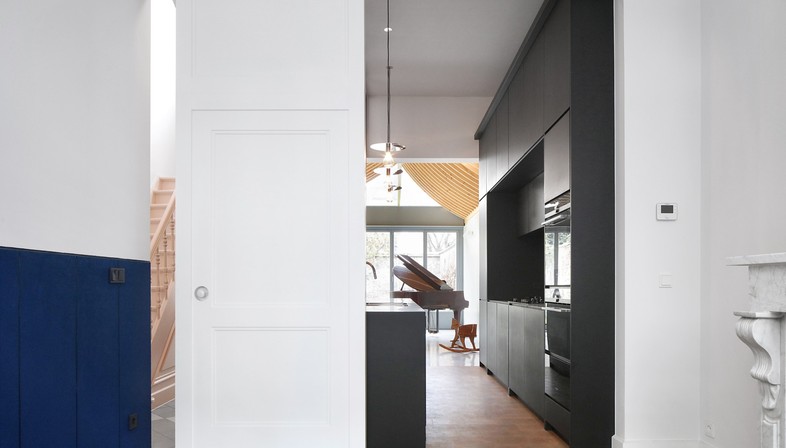 Belgian firm Bovenbouw Architectuur has completed another interesting renovation of a terraced house in its hometown of Antwerp, offering a precious contribution to the reflection on the design of modern interiors, which preserve some of the distinctive features of the original architecture.
Here on Lovelingstraat, near the imposing neo-Gothic church of Sint-Willibrordus, the terraced houses so characteristic of the streets leading out of central Antwerp, dating back to the 19th century, are all fairly similar in style: very narrow fronts span several floors, forming a dense and varied continuous façade blocking both light and air from the interiors, which enjoy only minimal views from the back. The entrances to the houses - which stand directly on the street - give onto long hallways running parallel to the main room, a sitting or reception room once meant for entertaining guests. The kitchen rooms, meanwhile, were usually located at the rear, connected to small courtyards used as pantries and storage rooms. The home, usually inhabited by modest, numerous families comprising multiple generations, extended upwards, with the bedrooms located on the upper floors, right up to the roof, usually a Mansard roof.
This was certainly not Bovenbouw’s first foray into a redevelopment project of this sort, with these same characteristics and located in Antwerp: notable past examples of their work include the house along Veldstraat, in the north, and the properties on Leysstraat in the heart of the city, now a popular shopping street.
In both of these projects - involving the transformation, expansion of the existing rooms, and adaptation to new living conditions - two themes close to the hearts of the architects of Bovenbouw clearly emerge: the first is that of ‘breaking through’ the interiors so as to illuminate the very centre of the house, whilst the second is the alternation of old and contemporary styles, without creating stark separations between the historical and the modern, the ancient and the current, but instead adapting their work to suit the existing structure, allowing them to create harmonious and comfortable interiors with a certain timeless charm.
In the house along Veldstraat, which is of a very similar type to the one on Lovelingstraat, the work was more radical, breaking down both of the short faces of the house to allow the light to penetrate all the way along the main corridor. In the project in question, however, in which the main façade has remained untouched, the architects have opened up the space from the inside, removing the wall of the stairwell and creating a larger corridor with more breathing room. The rear building was then demolished, freeing up the courtyard and allowing it to be transformed into a garden, whilst the home itself was completed with a large window providing a considerable amount of natural light and a sense of interaction with the outside world. In addition, the masonry wall in the centre of the ground floor has been replaced with another glass wall, making the heart of the house - now no longer dark and drab - the perfect spot for the kitchen. Daylight is able to illuminate the entire living area from above, through the staircase and its five windows, as well as through the skylight and the back window.
The final space at the rear is now the music room - home to a grand piano - which gives directly onto the garden. Visible even from the entrance, the ceiling of this room features exposed wooden rafters which imitate the drapery of a curtain, creating an intimate atmosphere which is also redolent of the elegant stage of a theatre. The steel beam, painted sulphur yellow, and the grey windows and doors in the background lend the scene subtle flourishes of modernity.
As in the renovation of the historic buildings on Leysstraat, in the city centre, the incorporation of modern elements create a space that seems to exist outside of time. There are but a few remaining signs of the house’s history that have been preserved over the years, such as the fireplaces present on all floors in the rooms that overlook the street. Elements such as these, which serve as charming reminders of the original period of construction, are now treated exclusively as wall decorations, integrated by Bovenbouw with new and distinctive figurative elements: on the ground floor, the blue plaster wainscoting in the dining room, the glass wall with the red oak frame, the central steel beam, the draped ceiling. The parapet of the staircase is original, but it now has a postmodern flavour after having been painted pale pink. The use of sliding or tilting doors makes the space feel larger, transforming it into a sort of large open-plan area. Indeed, ideally an observer would be able to see, in a single glance, the atrium and the brick wall that encloses the courtyard, or the dining room that gives onto the street and the lounge with its piano and green backdrop. And so on, moving up to the upper floors, the design is peppered with purposeful details of this sort. On the first floor, the staircase comes to a landing with a window and a teal-coloured oblique beam, set in a purple wooden screen concealing small service rooms. Continuing upwards, the staircase closes up again to create space for a bathroom behind it, with a curved wall decked out with pink tiles.
The grey ceramic flooring in the entrance hall becomes grey marble in the lounge and natural oak in the kitchen and on the upper floors. The surface of a light, uniform wall has been used as a canvas for a collage of sorts, with a range of bold and colourful material accents applied to it, creating and enhancing a theatrical backdrop for domestic life. 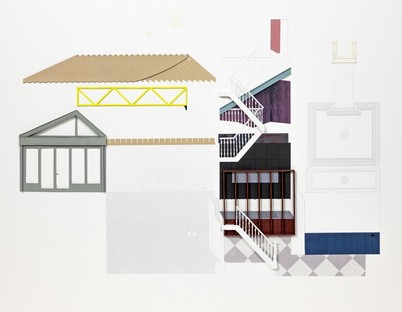 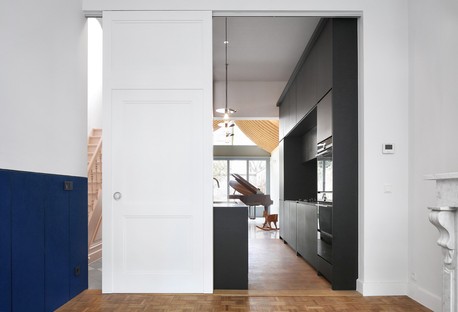 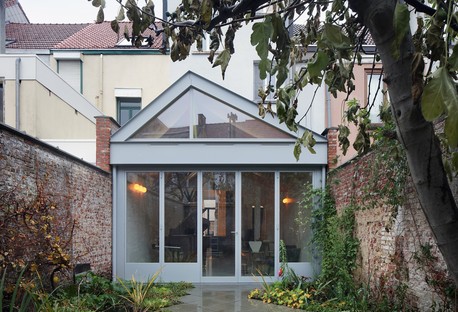 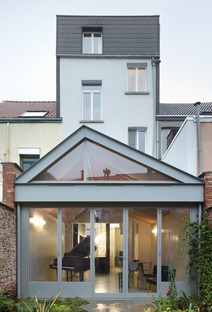 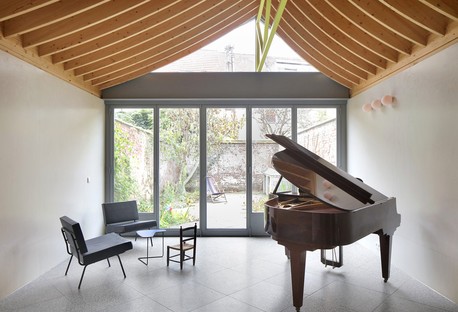 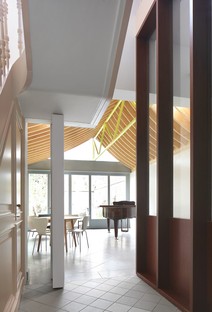 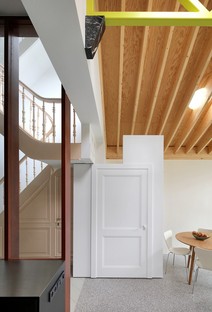 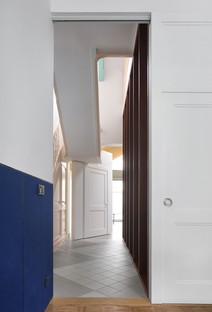 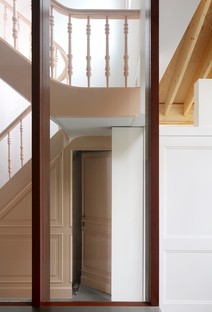 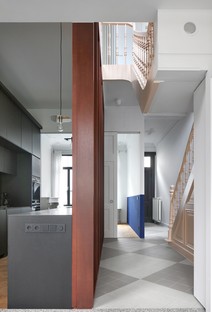 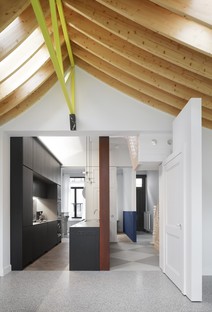 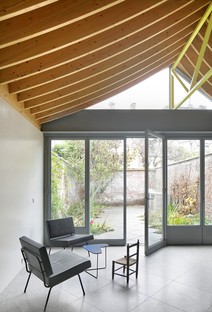 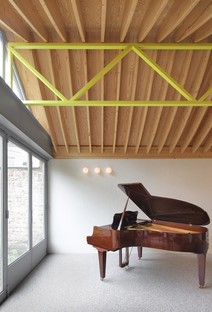 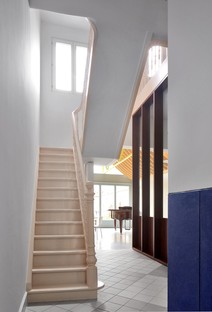 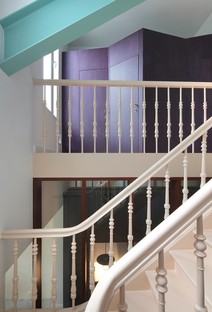 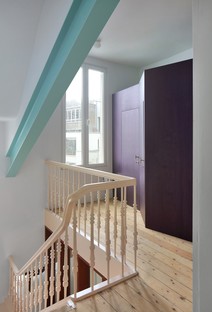 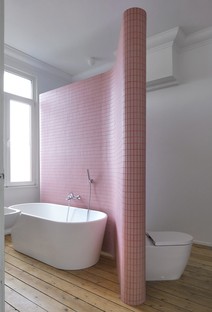 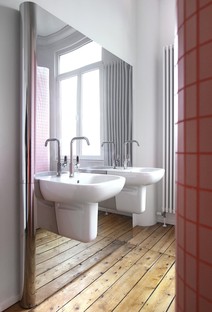 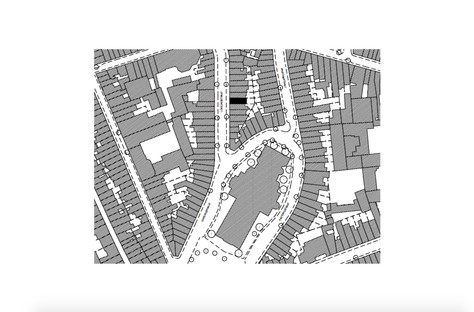 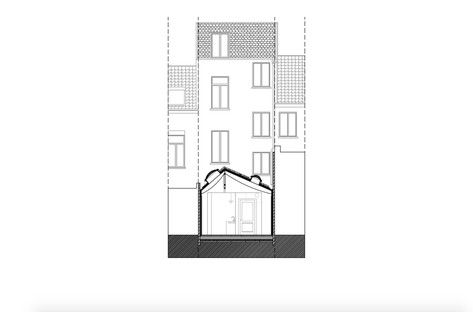 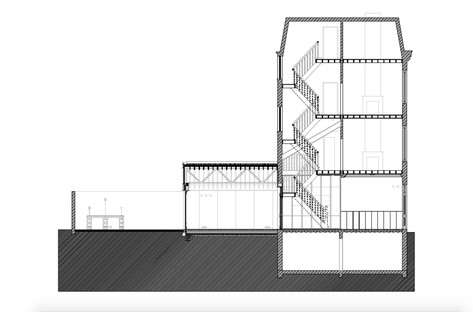 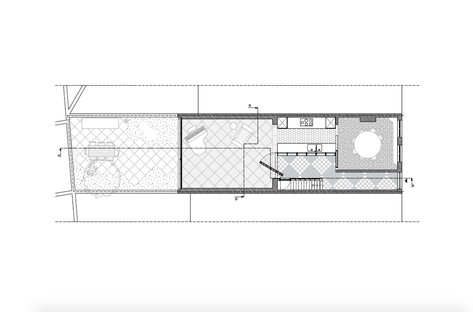 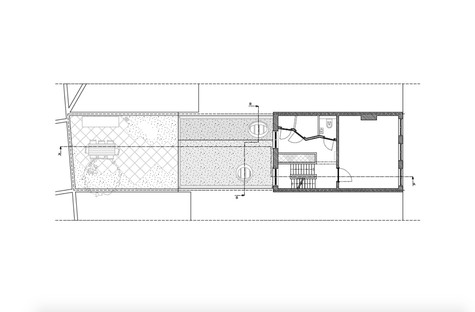 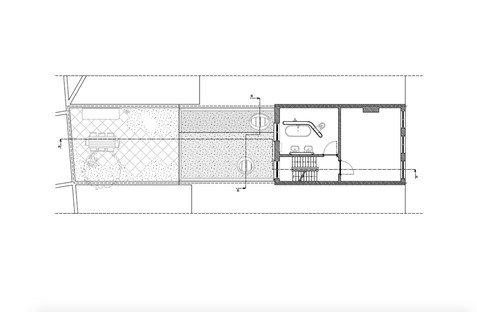