The Dutch architects of Studioninedots have completed construction of Westbeat, a sculptural residential building in Amsterdam’s Nieuw-West district. Westbeat stands out with a base composed of eighty-six spectacularly interwoven arches of different shapes and sizes, containing a 3250 square metre superspace designed for public use, a flexible structure in which to experiment with new forms of socialisation incorporating a number of pedestrian crossings through the building. 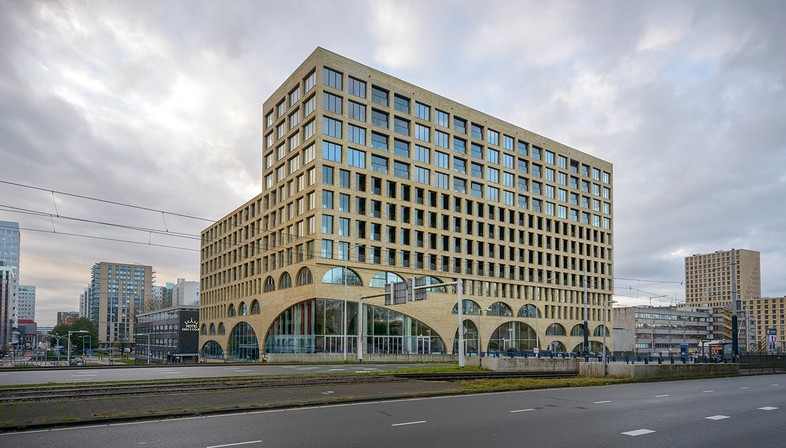 Amsterdam’s Nieuw-West district has recently been undergoing a progressive densification of its population. This is the location of the latest project by Dutch architectural practice Studioninedots: Westbeat, an imposing brick-covered square block harmoniously combining two souls, public and private.

The private portion consists of 150 residential units occupying the upper part of the building, with a total gross surface area of 24,300 square metres, while the lower part contains a multi-purpose hall of considerable size entirely intended for public use. In the design of this superspace, Studioninedots investigates and explores the design of public spaces not intended for a single fixed use, launching the concept of "WanderVoid".
The underlying idea is that in our increasingly crowded cities, too many spaces are over-determined, focusing specifically on limited types of user. In the "WanderVoid" at the base of Westbeat, Studioninedots has created a flexible place in which to experiment with new forms of meeting, exchange and connection arising out of the need to improve the quality of urban life.

Westbeat is a square construction on multiple levels in which the first 8.5 metres (the height of the "WanderVoid") are characterised by big arches, which serve both as openings onto the outer perimeter and as structural elements of the interior. There are 86 of these arches, in different shapes and sizes, in the 60x65 metre space. Studioninedots describes the space as a "sculptural setting that invites residents, locals and the public to discover this new public hub and make it their own. This superspace alternates in function, hosting workspaces, hospitality venues, performances, concerts and more."

This flexibility of use is supported by the fact that the vast open area can be subdivided and configured in a variety of ways based on the multitude of different arches which structurally support the lower part of the building while giving it a highly statuesque appearance.
The arches at the base of the building literally and metaphorically elevate the residential part of the construction, creating a pleasing transition in the pattern of the windows. At higher levels the windows become smaller, squarer and closer together, adding dynamism and a sense of motion for the viewer looking at Westbeat from outside.

According to Studioninedots, Westbeat is an ambitious building that serves a number of functions: screening the neighbourhood from the A10 highway and bridging the height differences on the site with new pedestrian routes through the building. It acts as a barrier to traffic noise with sound-dampening façades and empty spaces.
From a social perspective, the focus is on attracting a young urban population to this quickly growing neighbourhood and supporting the growth of creativity and business in Amsterdam Nieuw-West.
The architects report that they are more than satisfied with the project; as project team member Albert Herder reports, "for Westbeat to become a social destination, the architecture needs to make a mark; such a vast arched public space creates the ‘wow’ factor we imagined". 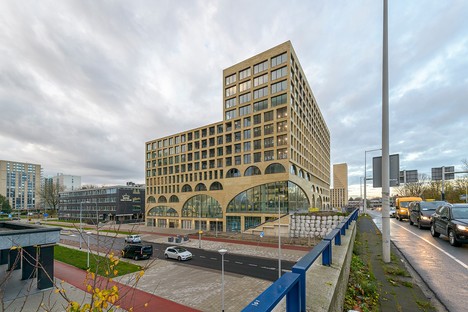 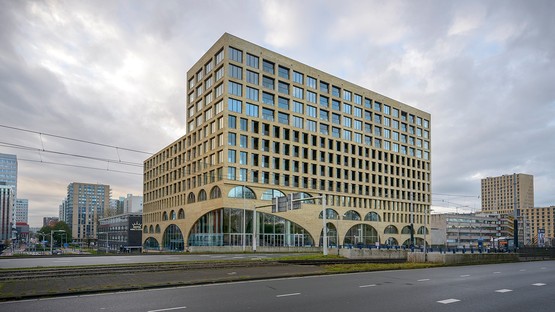 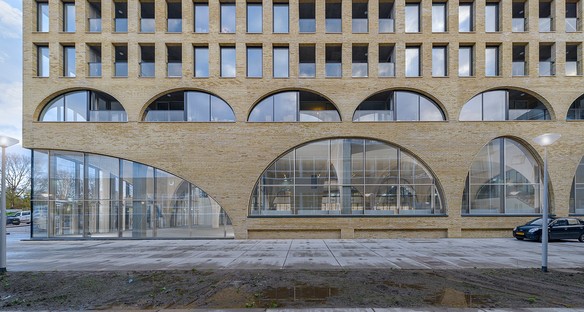 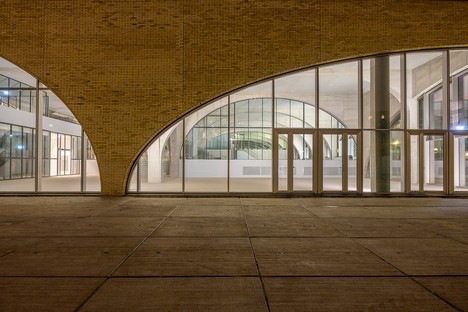 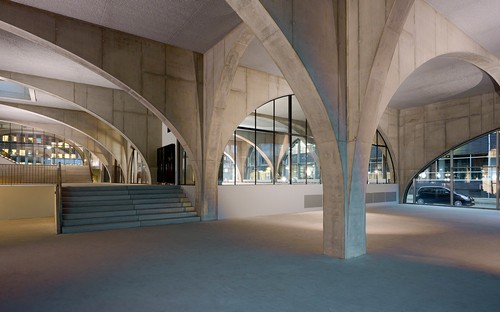 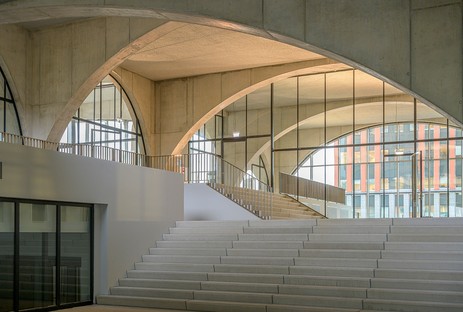 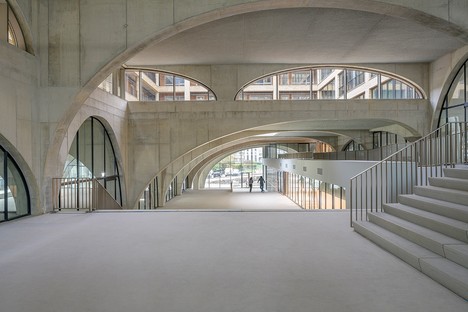 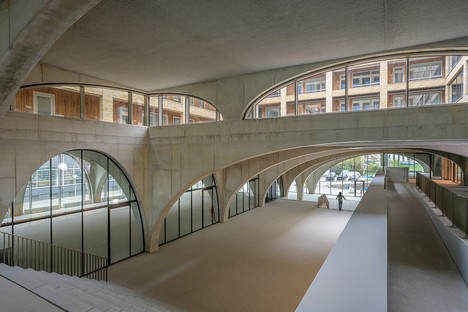 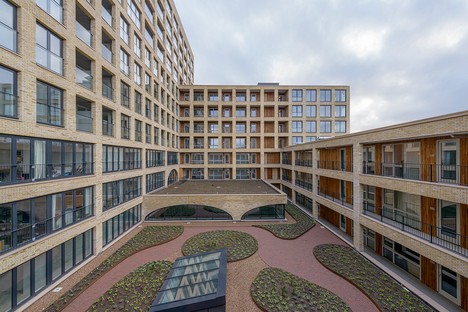 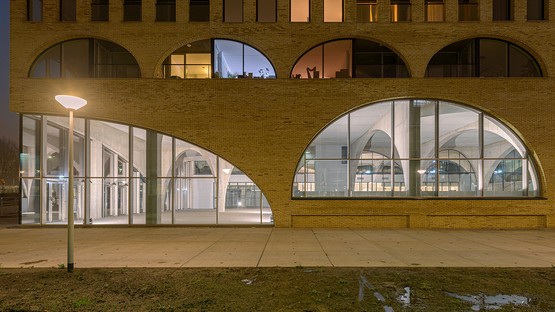 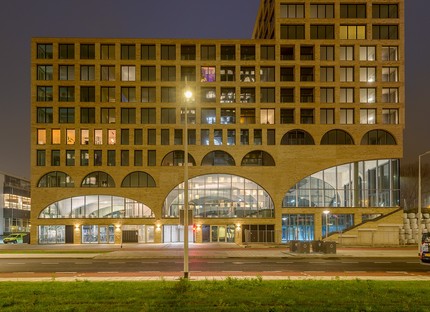 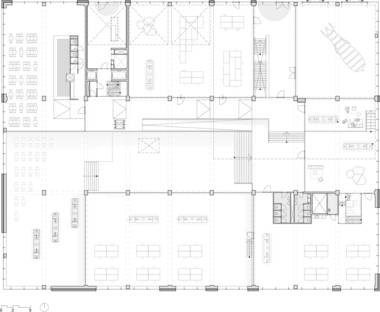 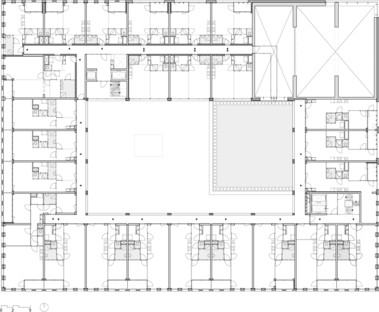 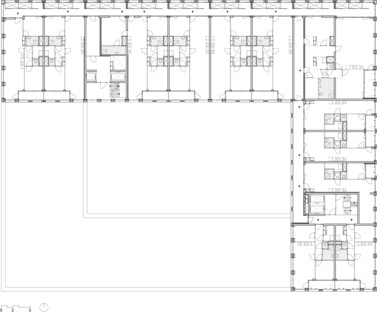 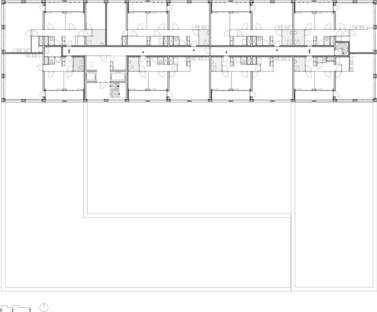 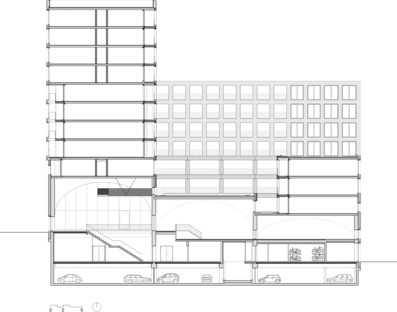 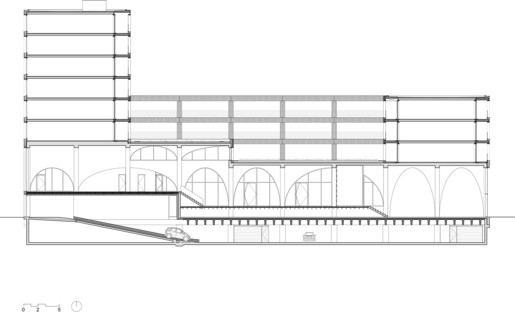