Villa Fifty-Fifty is a home on the outskirts of Eindhoven by the Dutch architects of Studioninedots. As the name suggests, the project adopts an equal approach to the subdivision between inside and outside, proposing a solution ensuring continuity and making it impossible to distinguish between the garden outside and the space inside. The attempt to go beyond this distinction fits into the line of contemporary research in the area of hybrid and shared living. 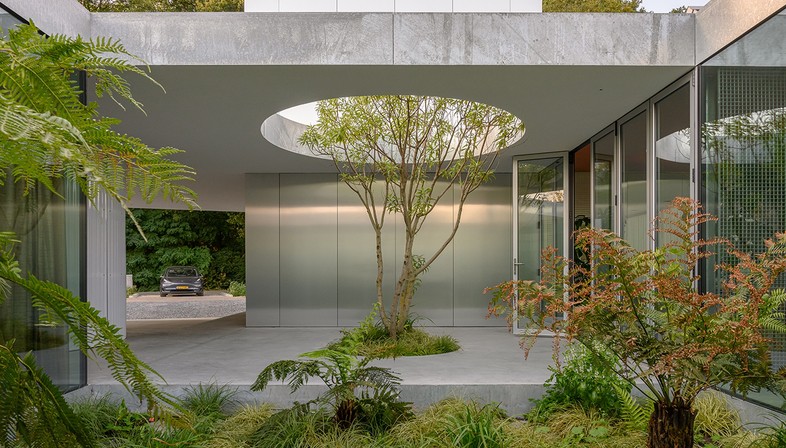 Fifty-Fifty is the name of a private home in the Strijp-R district on the outskirts of Eindhoven, in the Netherlands. Studioninedots, an architectural practice founded in Amsterdam in 2011 by Albert Herder, Vincent van der Klei, Arie van der Neut and Metin van Zijl, wanted to express the concept underlying the whole project: a balanced subdivision between inside and outside, which does not look like a division but appears to be a single hybrid place. More simply put, a new typological approach to living that makes the most of the interaction between people and nature.

A fluid transition between inside and outside is a popular trend all over the world these days, and Studioninedots made its own contribution, on the basis of a specific request from the clients, who wanted to live in a minimalist environment that would be free of objects but strongly connected with nature. In this regard, they say in a note for the press that: “Studioninedots sought to investigate a rather radical translation of the view that living and outdoor functions are equally important”.

Studioninedots took advantage of the opportunity offered by the Villa Fifty-Fifty project to study and expand their research in the area of the transparent home. And so the omnipresent glass takes on the task of encouraging a visual relationship between the greenery and the spaces inside the home, without giving up the essential thermal insulation. To give form to this hybrid idea, the architects created a double-height tower surrounded by a series of smaller, single-height volumes. These are separate but connected by a shared roof, with openings at certain carefully chosen points to diversify the spaces below it.
The layout of the home clearly reveals how the space is divided into square blocks allocated to a variety of specific functions: bathrooms, open garden, half-covered garden with living area, dining room surrounded by greenery, storage area. Studioninedots did not want to position the blocks in the conventional way, but organised the various different functions on the basis of an apparently random layout that induces us to rethink the way we organise our everyday lives on the basis of a more active, exploratory, interactive logic. The result is a house that is developed in and with the garden, or rather, through the garden. A design expedient that underlines the building’s relationship with the landscape, in a mosaic of connections between open and closed, between inside and outside, without defining exactly where one ends and the other begins.

The shared family spaces and the parents’ spaces are on the ground floor, while the girls’ rooms are in the little tower, designed to be self-contained.
The entrance opens onto a green open space which, on closer inspection, turns out to be divided into smaller areas, little squares which are similar in size but each have their own atmosphere, with different lighting depending on the windows, materials and colours, contributing to the dynamic, constant transition from one space to the next.

The materials employed in the project express an industrial atmosphere inspired by the neighbourhood, sharing a palette of greys with varying textures. Studioninedots identifies four volumes featuring truly unusual materials: the master bathroom clad with flagstones; the bedroom and office with their walls covered with glazed tiles; the round shed fashioned from semi-transparent corrugated polycarbonate, and the tower, wrapped in polished aluminium subtly reflecting the landscape around it, creating an almost camouflaged surface.

Villa Fifty-Fifty, with its omnipresent garden and vaguely industrial look, is the perfect way to bring together, and not only metaphorically, the industrial heritage of the neighbourhood around it and the nearby forests. 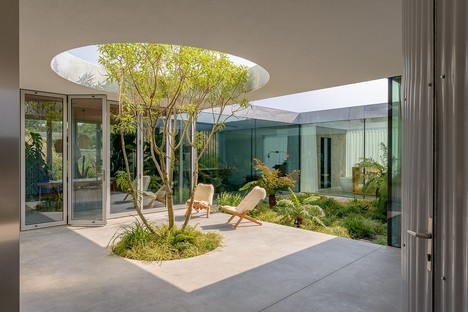 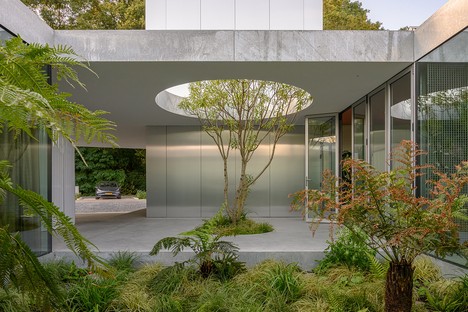 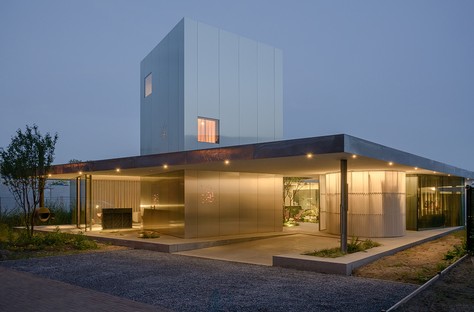 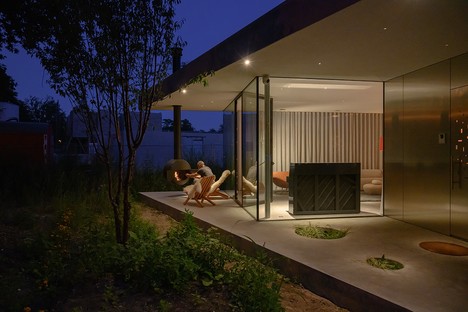 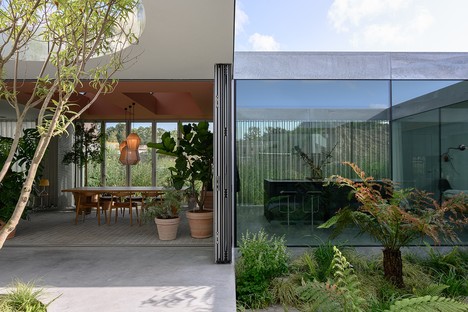 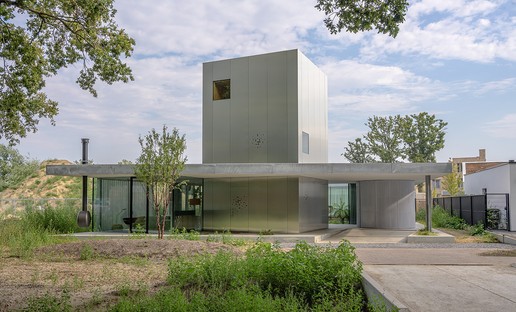 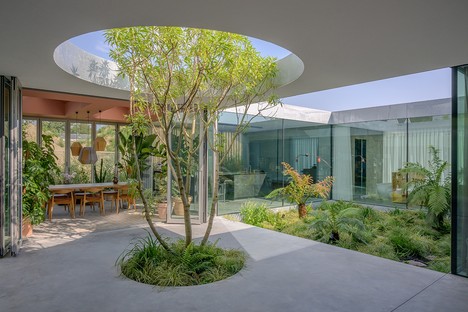 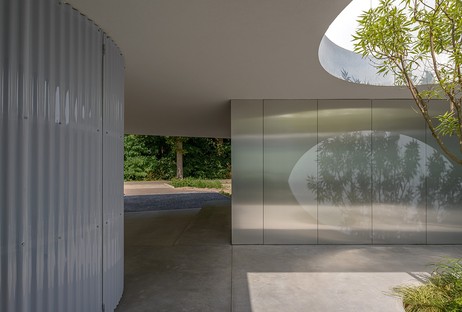 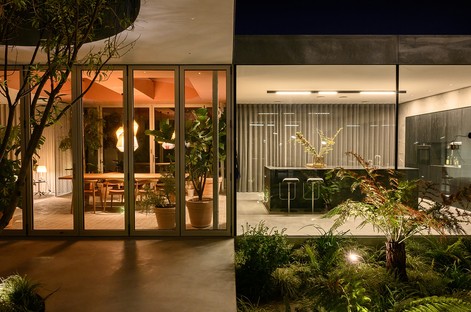 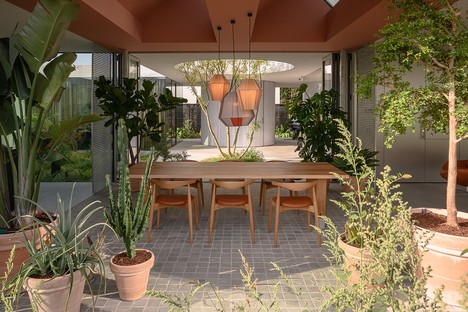 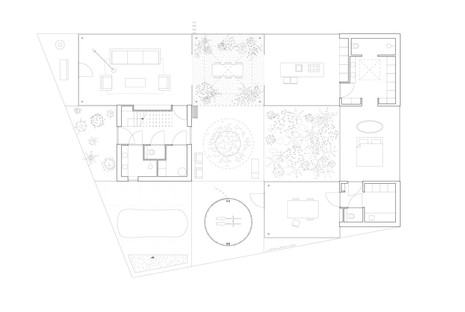 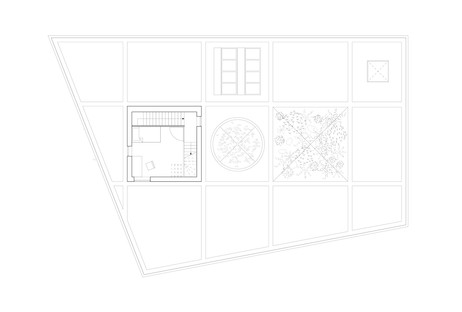 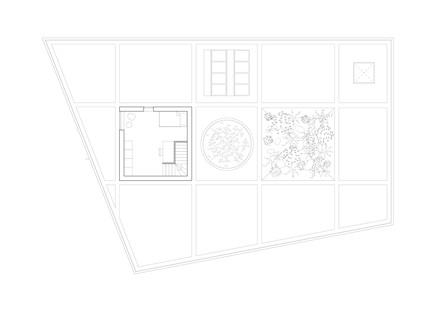