In the Courtyard Hybrid project, Vector Architects restore a Beijing zayuan, making what used to be a domestic courtyard into a centre for public life in the changing district of Baitasi. 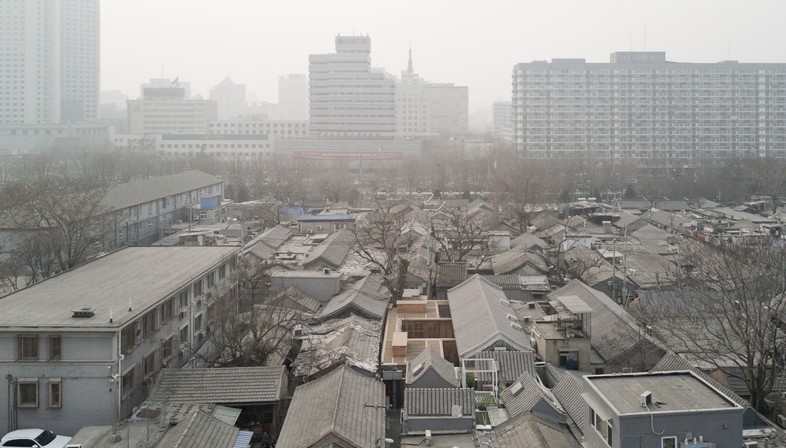 Courtyard Hybrid is the eloquent title proposed by Vector Architects for reclamation of a zayuan in Beijing to create a co-working space, encouraging revitalisation of community life in the area.
The question of how to bring the past into the current social reality of a big city such as Beijing is the common factor inspiring a number of recent redevelopment projects in the city’s historic hutong. A few years ago Floornature covered the interesting project by ZAO/Standardarchitecture redesigning the routes, façades and functions of Cha'er Hutong in the city’s well-known Dashilar district. Like other co-housing projects promoted by the State, this one is intended to act as a model of recovery of the city’s historic fabric, in partnership with emerging players in art and business. The phenomenon of residential towers constructed in record time in preparation for the 2008 Olympics generated strong criticism among architects all over the world, forcing the authorities to reconsider their territorial development policies.
Vector Architects’ project was implemented in Beijing’s other historic quarter, Baitasi, in the heart of the old town. Courtyard Hybrid is part of the Baitasi Remade programme, linked with Beijing Design Week, a project that aims to boost the potential of existing infrastructure, renew the urban fabric for the community, and regenerate the area with spaces for a variety of uses.
The urgent need was for creation of public spaces in which the community could get together and come up with a new way of living in the city, taking the necessary care not to distort the identity of the place or sacrifice its memory, image and uses. The Chinese studio was asked to redevelop a zayuan, an evolution of the siheyuan, a courtyard surrounded by buildings that historically belonged to the same family, a micro-society which conducted its domestic life in these indoor/outdoor spaces.
The zayuan in question was a courtyard of irregular shape due to the addition of a couple of functional constructions, while the main building, constructed as a dormitory in the 60s, stood to the north of the site. In the desire to maintain a link with the historic use of these spaces, their original volumes were recovered, replacing the structures when unavoidable. Those which were removed have been replaced with others made of wood, while a few glass brick dividers complete the courtyard, blocking certain views and suggesting new pathways. The sloping roof has only been maintained on the northern building, which has become a single exhibition and event gallery attracting a large public. The other two volumes to the side of the main courtyard have been reconstructed out of natural wood, with a flat roof, and now contain a coffee shop and a multi-purpose room that can be used for seminars and small events, and as an office. The project converted them from closed, introverted rooms into permeable spaces, with façades made up of glass doors, so that the interiors could be adapted to different uses. A single flat roof, consisting of larch trunks supported by a coffered ceiling made of laminated bamboo, joins them together, passing through the main courtyard. The platform roof thus formed reveals the idea of a path between inside and outside. The roof rises in the two spaces to create two skylights that transform the courtyard into a city landmark at night.
Use of wood ensures that the building fits into the residential neighbourhood around it without creating perceptive fractures, while the flat roof ensures that it stands out, visually anticipating the idea of a service building. Pre-existing constructions and modernity thus live side by side, adding a new functional dimension.
The goal was in fact to suggest possible temporary uses for the spaces to people, but without imposing them, allowing the renovated spaces to attract people to take them over and reinvent them. Maintaining its original layout, the zayuan has a main courtyard onto which all the indoor spaces open: the northern building, transformed into a generic event space, and two tiny courtyards, little natural gaps open to the sky, distinguishing the spaces and making use of them as reservoirs of light and air. When necessary, the presence of glass doors permits direct communication between the little courtyards and the main one, creating a multiform outdoor space which is even more versatile.
While in the past the zayuan was used by the families who lived in the buildings around it, today Courtyard Hybrid proposes a model of public space for all intents and purposes. When both entrances, the western one on Qingta Hutong and the eastern one on Gongmenko Sitiao, are opened up, the courtyard becomes a passageway with services accessible to all, a sort of little square that is revealed so that anybody can stop in the café. 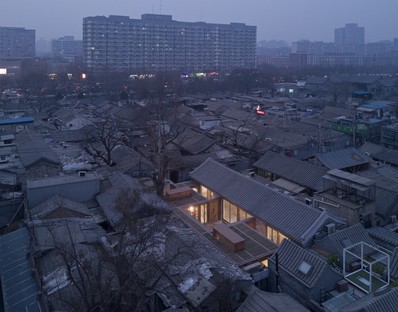 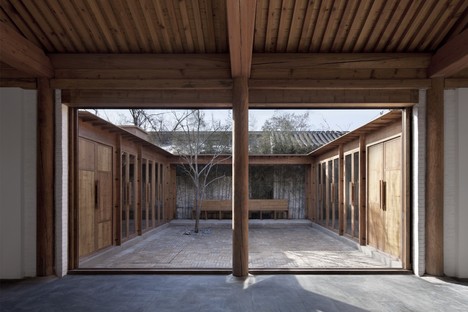 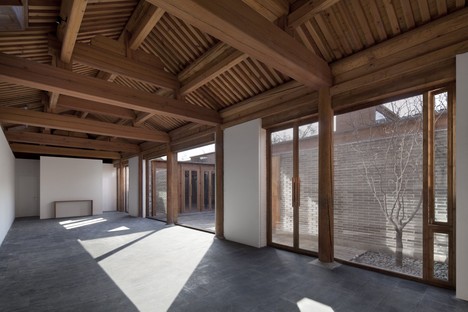 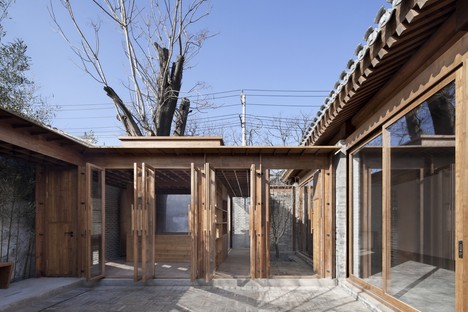 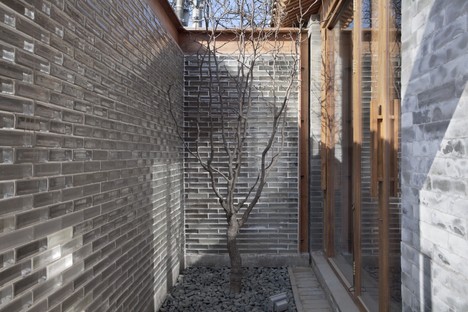 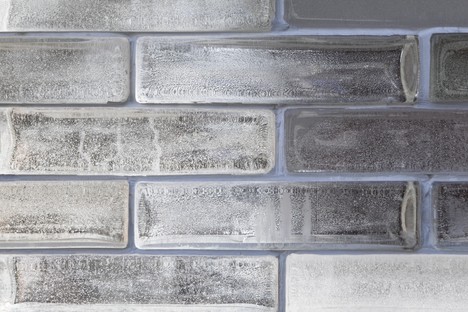 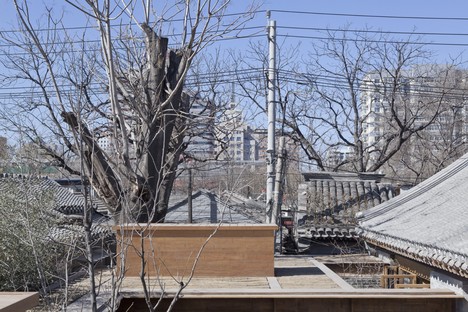 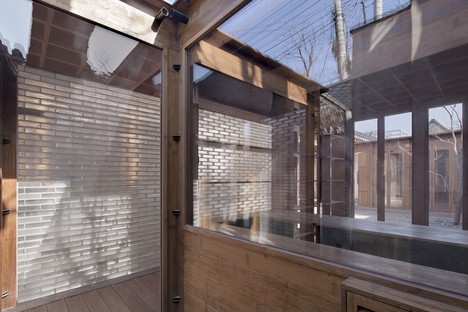 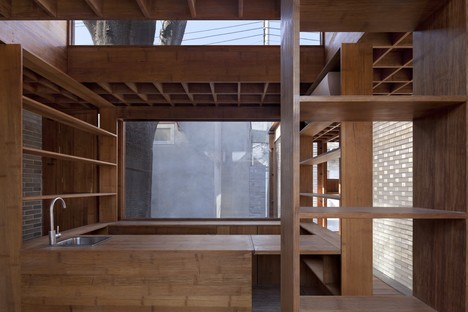 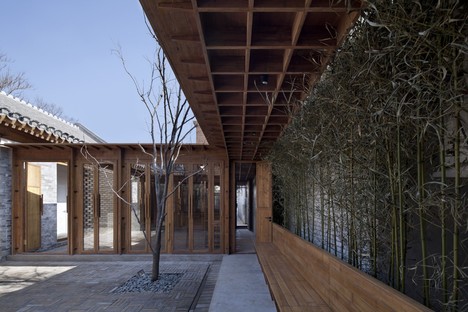 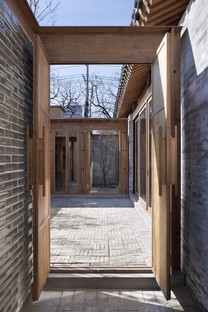 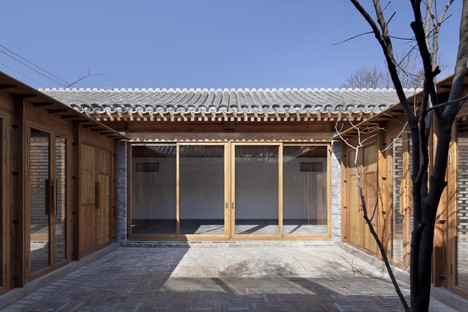 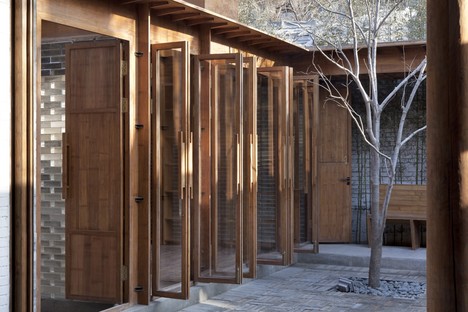 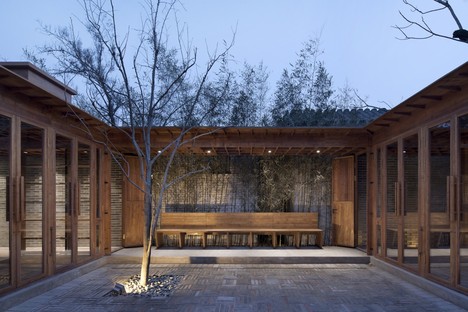 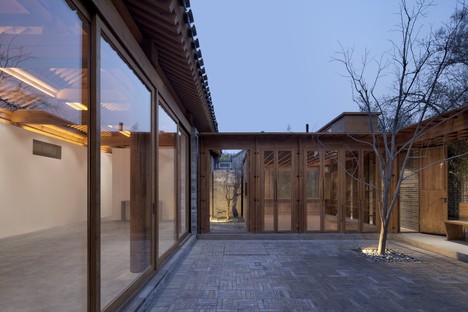 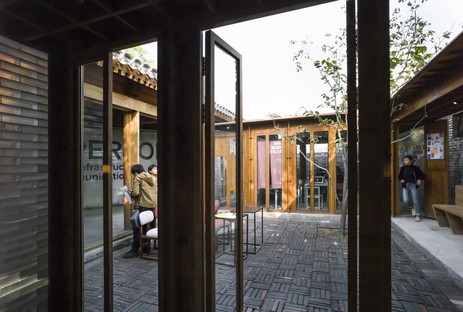 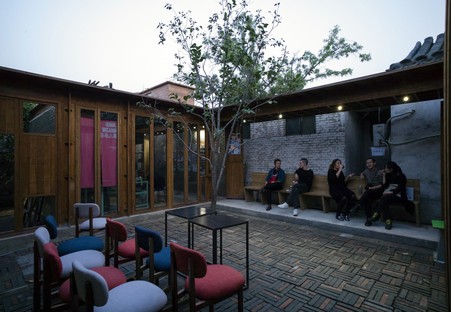 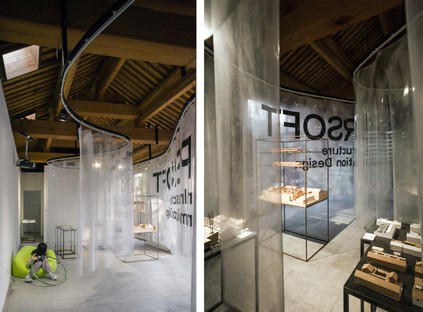 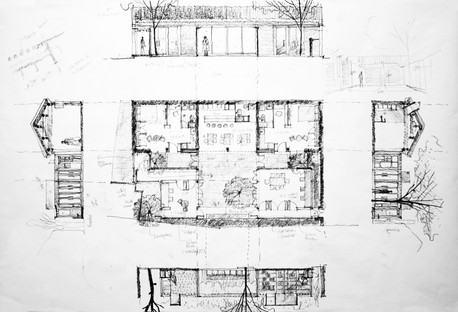 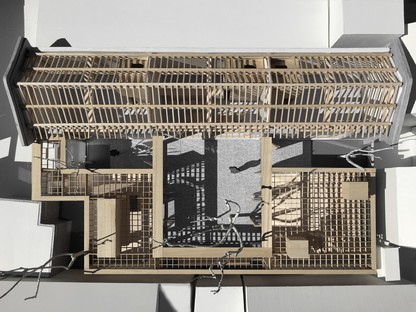 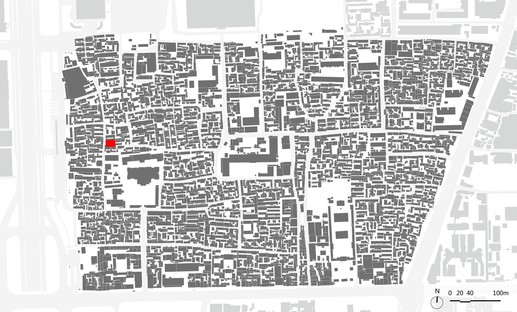 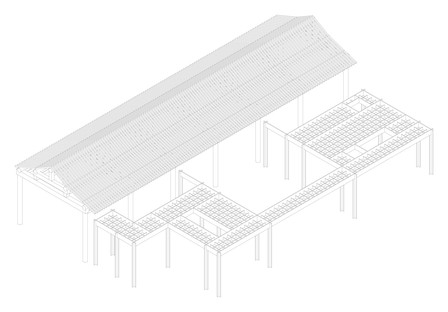 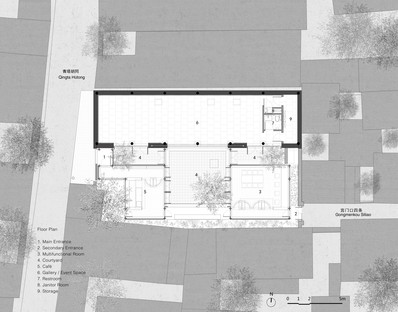 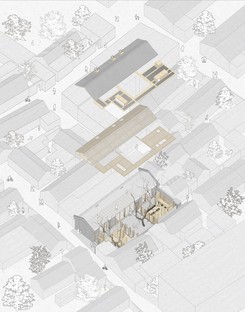 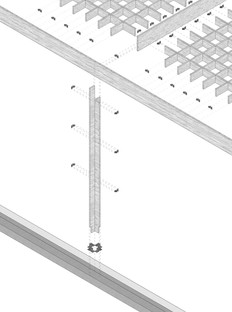