UNStudio The Looking Glass façade architecture for fashion in Amsterdam

P.C. Hooftstraat is one of Amsterdam’s most elegant luxury shopping streets, especially popular with fans of the world’s most prominent high fashion brands. At number 138 on this famous street, UNStudio designed the façade of a new flagship store, transforming the motion of fabric into architectural form in a new interpretation of the traditional façades of Amsterdam buildings. 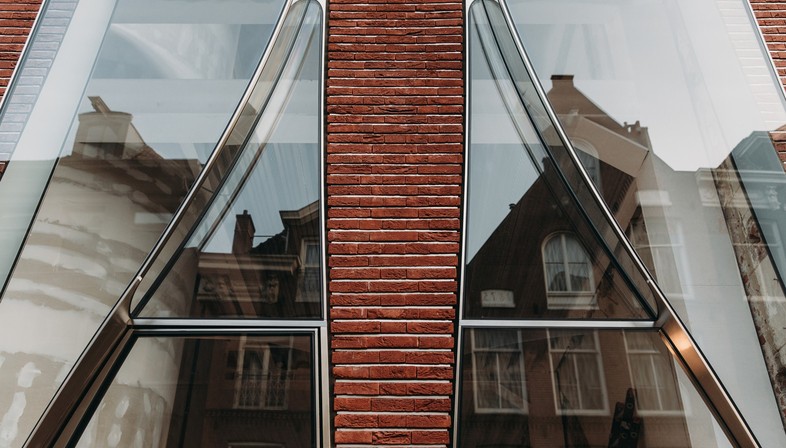 The Looking Glass is the name of the most recent project by UNStudio for an Amsterdam showroom, the store at no. 138 P.C. Hooftstraat, one of Europe’s most elegant shopping streets. P.C. Hooftstraat is named after Dutch historian, poet and playwright Pieter Cornelisz Hooftstraat and is located in the museum quarter (Museumkwartier), between the museum plazas (Museumplein) and Vondelpark.
P.C. Hooftstraat is the Amsterdam street on which the principal international and local designers have their showrooms, along with the single-brand stores and boutiques of the world’s best-known luxury brands, offering tourists and locals an important showcase of design, creativity and elegance. The same street is home to the Crystal Houses , the store designed by MVRDV which is now home to Hermès. 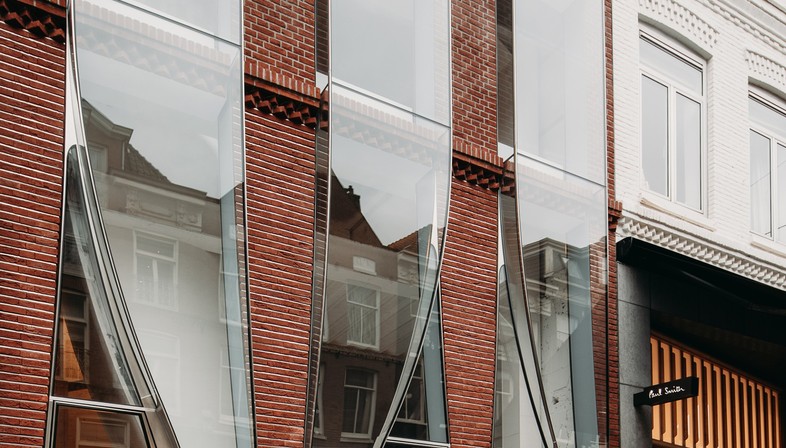 The vicinity of prominent museums provided the inspiration the architects of UNStudio needed. Museumplein is home to three of Amsterdam’s most important museums: the Rijksmuseum, the Van Gogh Museum and Stedelijk Museum (in addition to the Concertgebouw concert hall). The architectural studio designed the façade and the interior of the apartment on two levels located above the showroom. The architects clearly drew their inspiration from the way artworks are exhibited in the museums in the design of the display system used in the façade. The renovation of the showroom’s façade provides an architectural response to the need to display clothes, mediating between a traditional shop window and the narrow windows traditional in the houses of Amsterdam.
The architects succeeded in the challenge, coming up with a design that celebrates fabric and the way it moves in both form and function. The traditional brick wall is interrupted at the vertical windows by glass boxes consisting of three structural elements, assembled in the factory and then erected on site. Straight and curved panes of glass are bordered by stainless steel frames and glued in place to form glass boxes, which are then erected on site and completed, after installation, with a rigid layer of insulation.
The motion of the fabric is given architectural form in three structural glass panels that seem to flow from the upper level toward the showroom ground-floor with a sinuous motion. This fluid gesture becomes a celebration of fabric through the effect of glass and mirrors, creating different perspectives on the new collections and the showroom entrance at the viewer’s eye level. The architects celebrate the craftsmanship and geometry of haute couture in this boutique for custom-tailored outfits. The project also takes into account the specific features of its context, safeguarding the original design of the façade with the vertical division into three windows typical of the buildings in this part of the city. 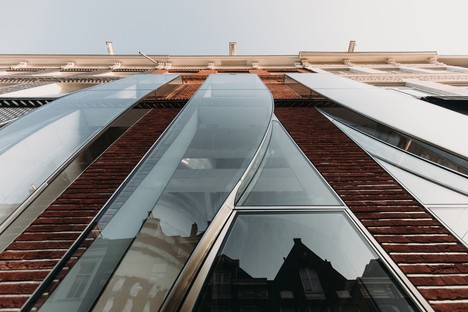 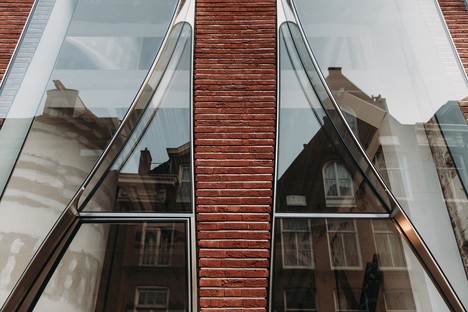 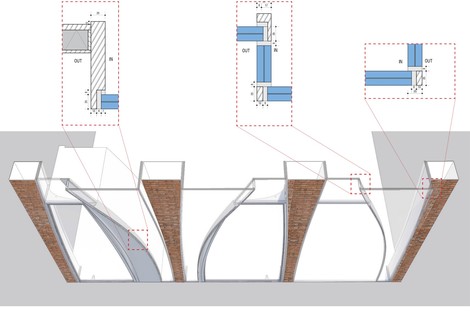 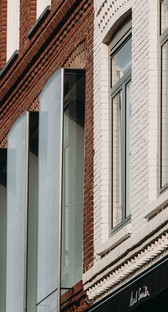 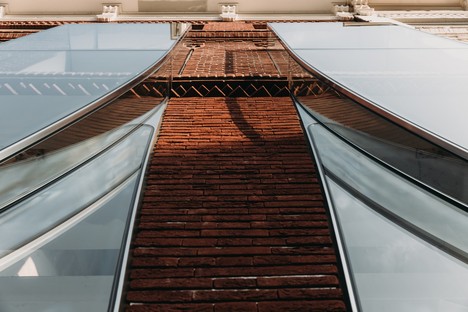 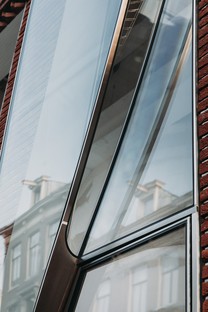 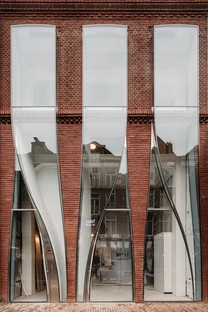 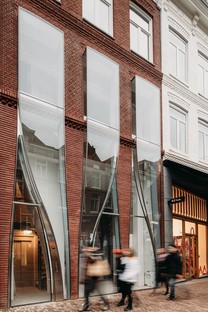