Tropical Space and the Terra Cotta studio and workshop

The architects of Tropical Space designed Terra Cotta Studio on the banks of the Thu Bon River, in Dien Phuong, Vietnam: a brick cube concealing a wooden core which is the workshop and museum of terra cotta artist Le Duc Ha. Tropical Space has made the building a symbol of the local tradition of ceramics. Terra Cotta Studio is the name the Vietnamese architects of Tropical Space have given the workshop of a ceramics artist on the banks of the Thu Bon River in Dien Phuong, in central Vietnam.
Brick and architectural form are used to create an object that reflects its content, a workshop for making and exhibiting terra cotta items made by artist Le Duc Ha. Le Duc Ha has become a trademark in his own right, inheriting the styles and production techniques of the Chama tradition of central Vietnam: pottery, statues, decorative items and clay lamps are still made in the area in a productive system that continues to support a large percentage of the population.
The structure is a cube measuring 7 metres per side, with four bare brick walls which are in turn divided into six squares to form a solid grid, fragmented with perforated infill. The project incorporates a number of decorative patterns in the laying of the brick, distributed over the walls to create variation and motion, with slits that serve to provide natural ventilation inside.

The interior is organised on three levels, in which the ground floor, containing the artist’s workshop, is clearly divided from the other two levels by a concrete floor slab with a big round hole in the centre, opening up the view of the structure above it. The floor slab is separate from the brick walls, supported by four square pillars which disappear into the mesh of the wooden frame, which, starting from the ground, rises up to the glass ceiling in a three-dimensional grid. The building consists of a series of spatial levels in a wrapper of simple geometric shape. A more protective outer surface, through which light nonetheless filters, is followed by an intangible construction made up solely of timber uprights and crosspieces, supporting walkways for passage and surfaces set into the module, which are sometimes used to exhibit the ceramics while at other times they are simply surfaces to sit on and drink tea.
At the heart of the volume is an empty space in which observers may turn from side to side to observe the construction around them. The building becomes a viewpoint, on the exhibition in its interior and on the landscape, down to the more private space of the workshop, in shadow, and up to the sky, as there is no ceiling and the building is simply covered over with a sheet of glass.

The last fence, both literally and metaphorically, is made of bamboo, outside the studio, and serves the purpose of drying the items made of clay. It repeats the square perimeter which forms the base of the design, but is only about a metre high: eye level for the artist as he sits in his workshop.
The architectural structure gives concrete form to the ceramist’s acts: his work starts in the ground, in clay and water, and when it is ready it is put outside to dry and then positioned higher up, once it has given off all the water it contains and is ready to be officially put on display. 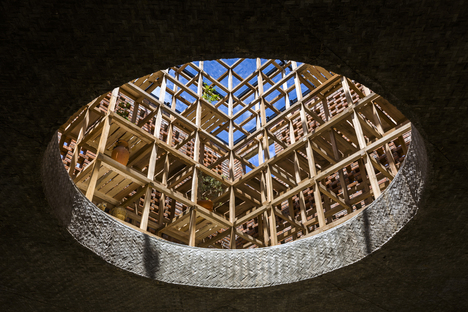 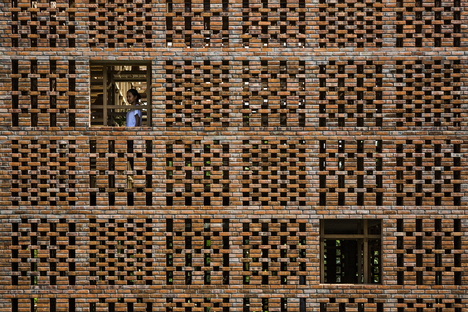 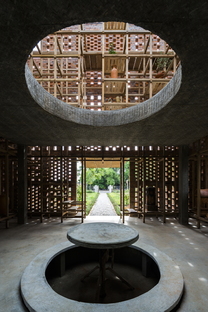 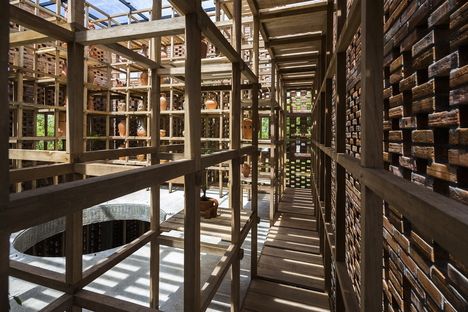 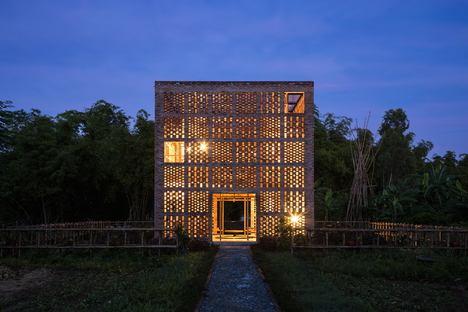 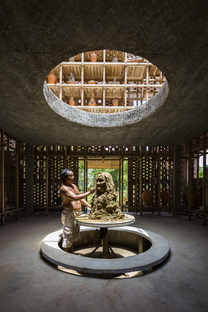 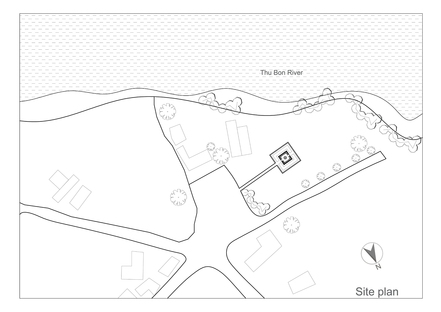 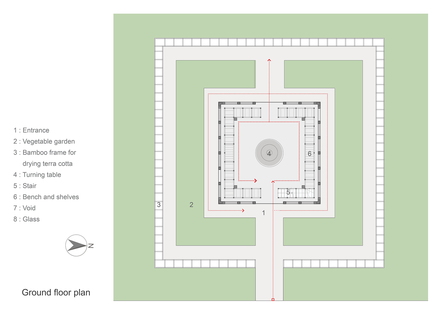 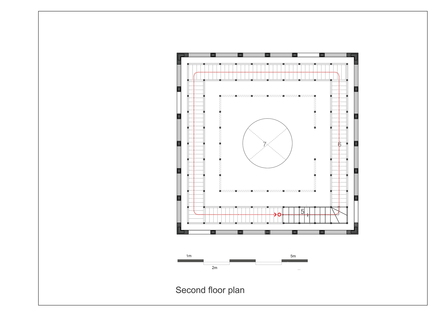