In the Warsaw Citadel is the Katyń Museum, commemorating the slaughter of 21,768 Polish military officers and civilians at the hands of the Soviet secret police in 1940. Katyń Museum was designed by a team of architects, artists and landscape architects under the guidance of BBGK Architekci. 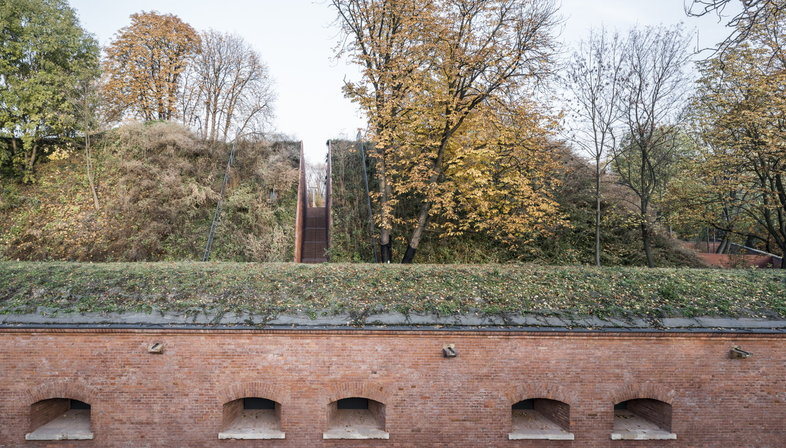 In the Warsaw Citadel is the Katyń Museum, designed by a team of architects, artists and landscape architects under the guidance of BBGK Architekci to commemorate and document the World War II Katyń massacre, in which 21,768 Polish military officers and civilians were killed in Soviet prisoner of war camps in 1940.
The idea of a place and an institution dedicated to the memory of the massacre originated with the victims’ families but was not implemented until many years after the event, in the late ’80s.
Following the discovery of the massacre, announced in 1943 by Radio Berlin, the Soviet Union denied responsibility for the events for many years, accusing the Germans; the truth did not come to light until 1990. A few months after the invasion of Poland, Stalin ordered that 21,768 Polish prisoners of war in Soviet territory be killed with a gunshot to the back of the neck. It took about a month and a half to execute them all, between 3 April and 19 May 1940. Katyń forest, the theatre of the massacre along with a number of nearby Soviet towns, will be remembered forever as a symbol of barbarism.
Katyń Museum is now part of the story told by the Polish army museum, which recently moved into the Warsaw Citadel. Following a contest announced by the museum in 2010, the idea arose of building a memorial to the Katyń massacre in a former fortress built in Warsaw in 1830, during the years of Tsarist occupation. This highly symbolic act traces the link between the town of Katyń, in Russia, and the capital of the Polish state, which had 21,768 victims.
The project chosen out of the 22 submissions translates the events onto the symbolic plane of the architectural complex, in an objective exhibition showing the documents and personal effects of the victims as testimony, supported by a number of multimedia tools.


In the hands of BBGK Architekci, the Citadel has evolved into a public park containing a museum and an artistic installation, a new centre for the city. The gateway to the area is on Jana Jeziorańskiego Street, which leads to the Alexander Gate, a big military gate excavated into the embankment around the fortress. Once through the gate, visitors lose all spatial references, finding themselves far away from the centre of the city of Warsaw and physically isolated (the site is on the bank of the Vistola River), where the fortifications reinforce the idea of emotional detachment from the world around. A path to the east leads to a forest, 100 trees planted in a square with a pathway zig-zagging among them. Visitors are not obliged, but spontaneously tend to walk through the forest to the Citadel Caponier. The addition of the forest, symbolically representing the one where the massacre took place, produces contrasting effects in the visitor: discovery of the beauty of the natural architecture on one hand, and anxiety at the horror that took place amidst all this beauty on the other.
In the southeast corner of the site is the Caponier, a red brick defensive construction that now contains a museum on two levels: visitors learn about the historic events and see artefacts found in the mass graves on the ground floor, while the second floor focuses on the personal tragedies of the victims’ families. The thick defensive walls with only small openings cast shadow on the exhibition route, in which tall shelving units contain, each in its own case, in perfect order, the objects and tools made by the prisoners and the personal effects and letters of the 21,768 victims. The large quantity of objects on display and the way they succeed one another in a series of backlit display cabinets, lined up one after another, without any names or other information, creates a totalising experience for the viewer, in which the numerous artefacts take the place of the people they belonged to, accompanying every step the visitor takes with their humble stories.
At the Caponier exit is the tunnel of death, a site-specific installation by artist Jerzy Kalina consisting of a pathway covered with black concrete that has a specific cathartic function. It takes visitors to the Avenue of the Absent, a path along the brick walls of the fortress. On the opposite side are 15 marble pedestals identifying the professions and political posts of the victims of Katyń - architect, mathematician, writer, politician, etc.: an entire ruling class and intellectual élite sacrificed to war, as if Russia wished to culturally and morally vanquish the land before defeating it with weapons.
Here, the new concrete construction is grafted without interruption but onto the historic walls and military buildings constructed in the 19th century. The architects colour the concrete red to ensure continuity, while preferring this material for its ability to allow itself to be moulded from the outside, to change colour when wet and to allow itself to be decorated by the veins of the wood used to make the formworks. Here and there the shape of a small object found on the victims’ bodies can be seen, ideally printed into the concrete as it is printed in the memory of the place.
The path takes us back to the forest of 100 trees, up a stairway dug into the embankment with 12-metre-high concrete walls: another place that encourages meditation, connecting the sky with the earth and the Avenue of the Absent with the new city park. Depending which way you turn, you may see the past or the future, death or life; in any case, a place of contemplation and sorrow, where the absence of any explicit description or narration encourages personal reflection. 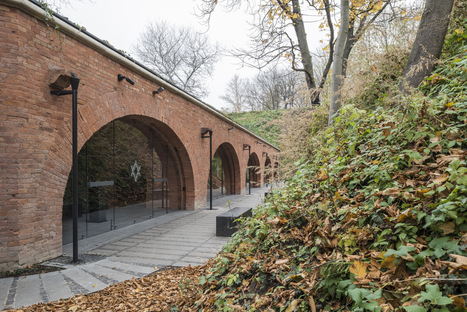 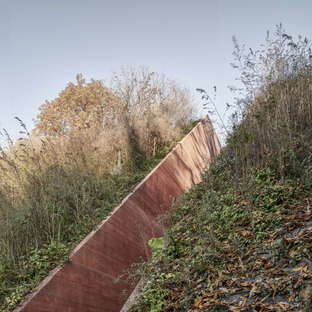 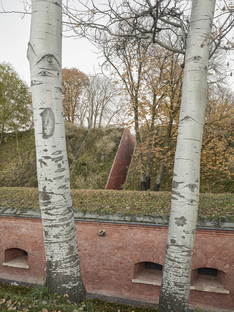 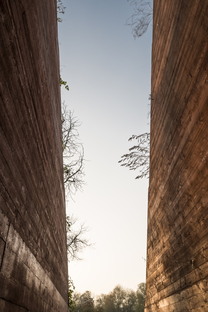 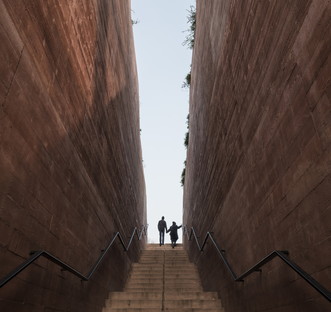 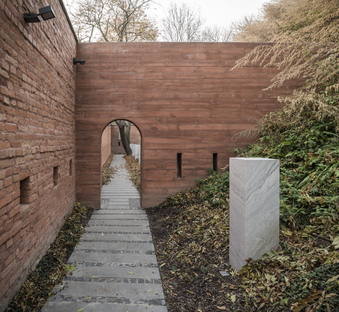 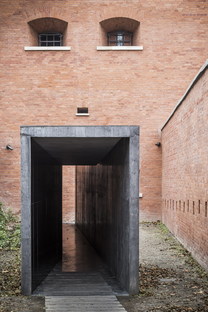 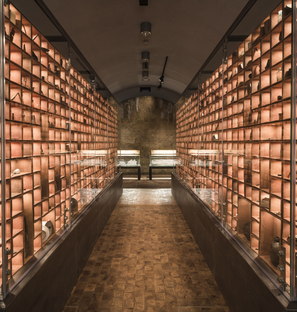 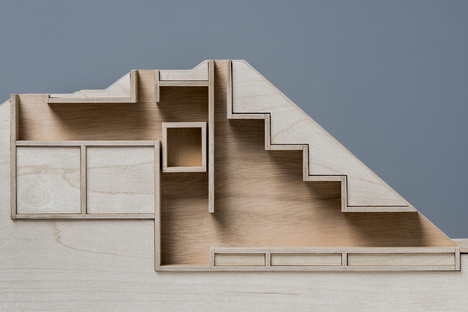 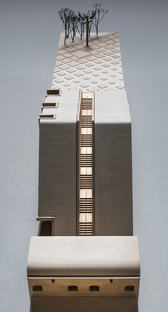 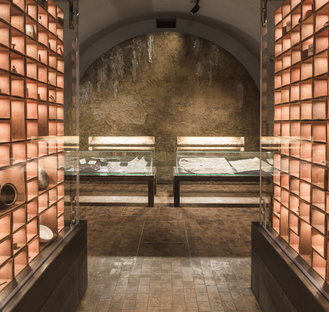 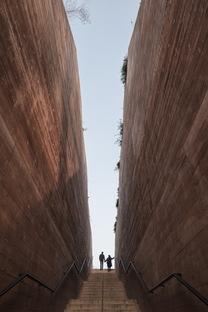 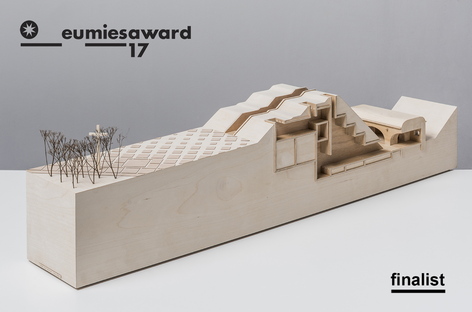