From May 29, the Aedes Architecture Forum in Berlin will be hosting the “Re-Use” exhibition dedicated to the works of the Tchoban Voss Architekten studio. The studio has dedicated itself, for years, to projects that respect the history and architectural language of pre-existing buildings, recognising their important role and impact in the urban space. A modus operandi which the architects have successfully applied to projects completed in Germany and in other parts of the world and which was also the subject of the first exhibition titled "The Java Tower" organised at the same Aedes Architecture Forum back in 1997. 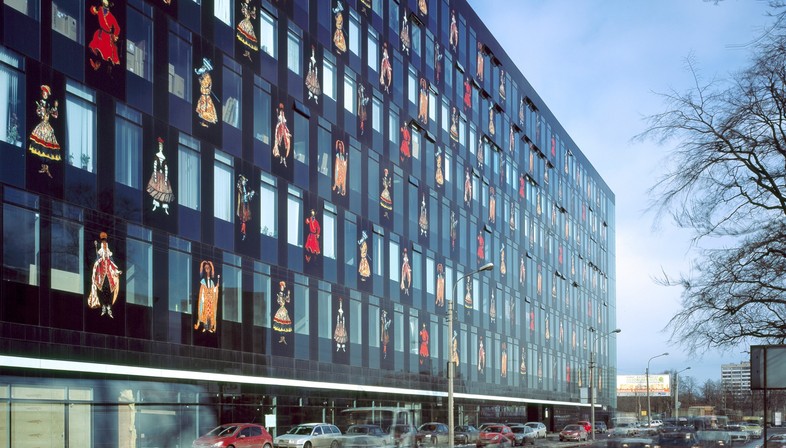 The Aedes Architecture Forum in Berlin presents, through the works of the Tchoban Voss Architekten studio, an interesting contribution to the theme of the reuse of buildings in urban areas. If in fact, particularly at an economic level, it may seem less expensive to demolish an existing building and replace it with a new building, it has also been amply demonstrated, based on holistic approaches to the theme, that restructuring and recovery are significantly more sustainable from an ecological and energy point of view. The Tchoban Voss Architekten studio has dedicated itself, for years, to projects that respect the history and architectural language of pre-existing buildings, recognising their important role and impact in the urban space and fabric, which therefore extends far beyond the physical limits of a building. A modus operandi which, when implemented, preserves the architectural quality of the building and of its context, recognising the value of the history of a place and the urban diversity that characterises it, contributing, where possible, to its development. The studio’s architects adopt this approach for projects carried out in Germany, as well as in other parts of the world. An approach that was also the subject of the first exhibition titled "The Java Tower " organised at the same Aedes Architecture Forum back in 1997. The structures involved in this type of project are typically buildings whose scale is often determined by their original function and where therefore the architectural solution also becomes a way to offer a new matrix of uses, with consequent repercussions on the urban space and on the development of the local context.

Taking a closer look at the projects presented at the Aedes Architecture Forum in Berlin, these are buildings constructed after World War II which, after seventy years clearly show their age and demonstrate the need for conservation and restoration interventions. Buildings constructed within the city fabric, characterised by elements of the architectural language of Modernism and that today continue to exert an important influence on the appearance of the cities of which they are part. But there are also structures in industrial areas dating back to the 60s and 70s that once stood on the outskirts of cities and which today have an important urban potential, with their envelopes ready to be reinterpreted architecturally, making them suitable for new contemporary needs and uses. This is the case, for example, of the former Rossiya factory in St. Petersburg, transformed into the Benois office building, or buildings such as the project carried out in Berlin at Ernst-Reuter-Platz no. 6, where the pre-existing architectural language has been preserved, giving back its important urban role that it once held in the square. Or projects in which the architects’ intervention to create new contemporary façades is evident, such as the work carried out at Blissestrasse no.5 in Berlin , where an architecture from the 1970s that characterised the neighbourhood has been renovated. Or in Hamburg, with Nikolai Kontor’s cube, a commercial building originally constructed in 1959, but devoid of any reference to the local context. In this case, it was the architects who renovated the structure, giving it a contemporary façade and offering a reinterpretation of the building’s historical urban context. 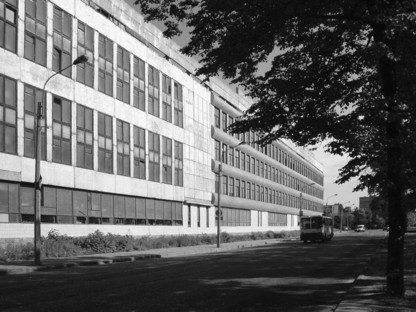 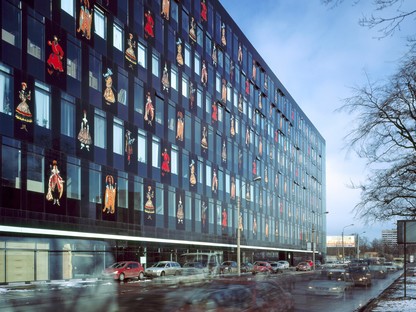 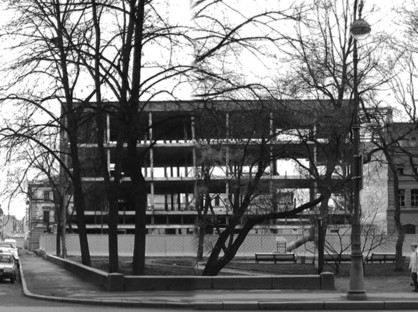 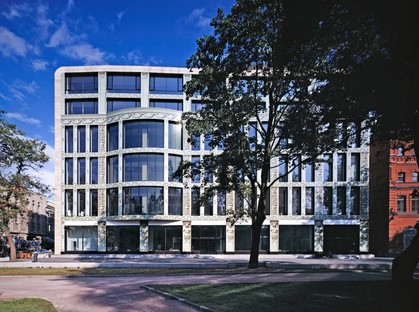 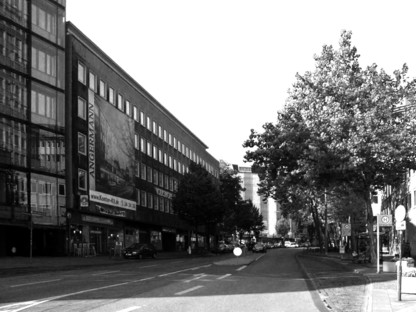 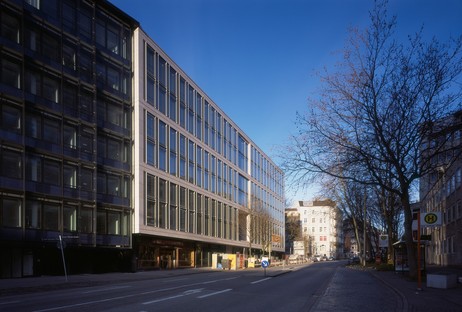 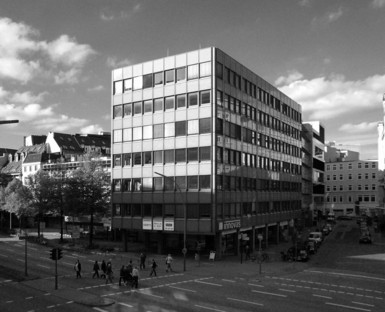 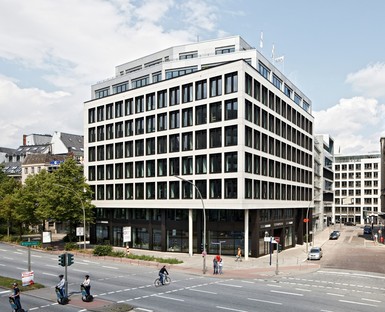 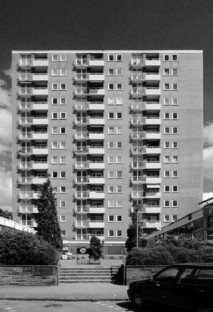 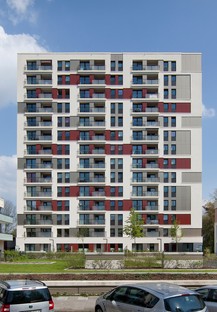 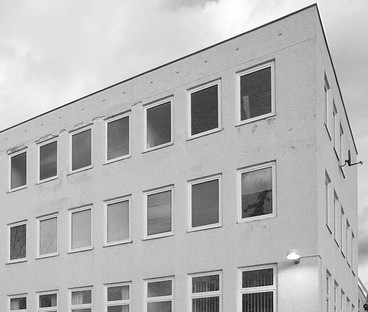 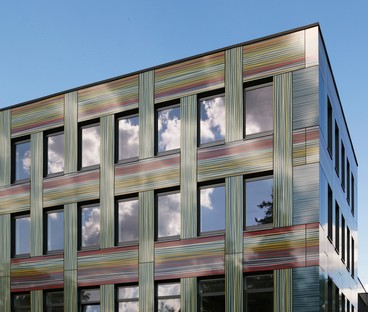 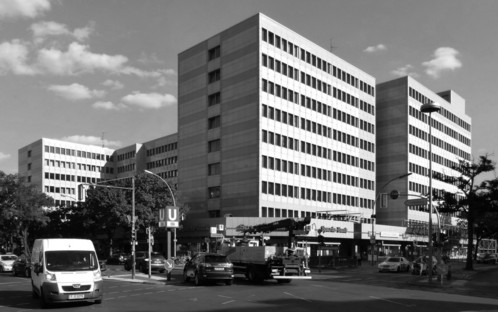 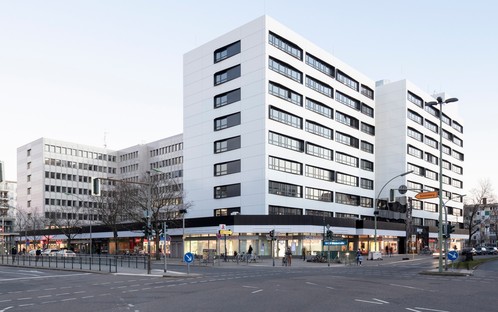 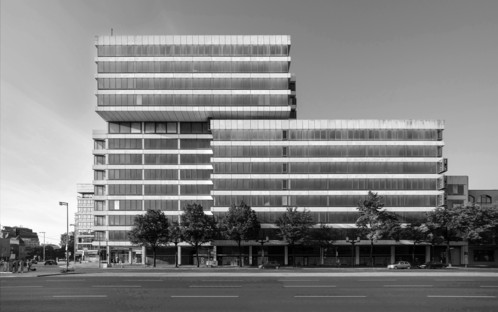 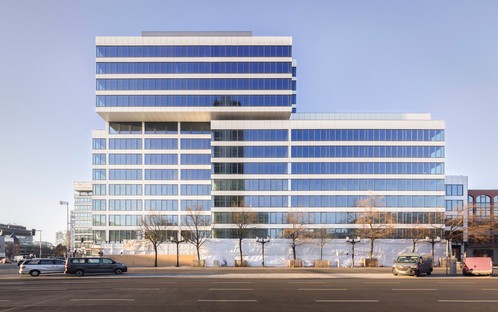