One of the latest examples of residential architecture from Tato Architects, this house in Sonobe in the prefecture of Kyoto, puts a local tradition in focus, namely the construction of annexes with polycarbonate panels. Tato Architects makes these bordering rooms into some of the most-used spaces in the house. 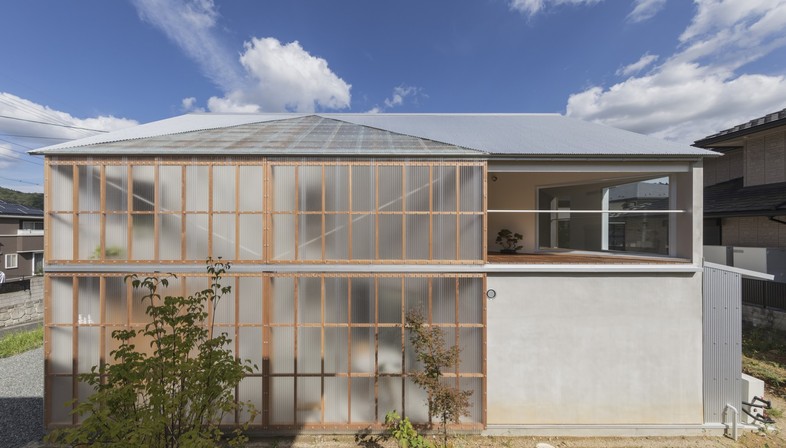 The house in Sonobe, in the city of Nantan, in the prefecture of Kyoto, is one of the latest examples of the architectural poetics of Yo Shimada and his firm, Tato Architects, which has devoted itself to residential construction in particular in recent years. On Floornature, we have already posted about the Blend Inn hotel, in which Yo Shimada tested out an idea for a spatial layout designed not for a specific system of accommodation, but for flexible use, in a neighbourhood undergoing transformation, namely the one which has grown around Nishikujo station, in Osaka.
For this single-family wooden house, designed and completed in 2017, the private client consisted of a family of only three people - two parents and a child - within a plot of just over 300 square metres, in what is now the district of Sonobe. As of 1 January 2006, this small town, along with several neighbouring areas, was incorporated into a new town called Nantan. Sonobe has remained an administrative district, around which several residential districts have been developed. The neighbourhood where Tato Architects’ new architecture is located is in a hilly area to the south of the station, which started being built in the 1990s. The layout is typical of rural outskirt regions, with plots of the same size and specific limits in relation to the surfaces built on. The typical residence that characterises the neighbourhood is a two-storey house with a roof with two or more pitches and a garden.
In addition to these characteristic features of the area, Yo Shimada wished to put a particular focus on the custom of equipping homes with small annexes, usually used as storage spaces, constructed in a makeshift fashion by the residents by blocking off rear entrances or verandas with corrugated polycarbonate panels. These types of terraces, which are fenced off and enclosed, see a lot of use in winter as laundry rooms, especially because, with the humid climate that characterises the area, these spaces surrounded by semi-transparent panels produce something of a greenhouse or conservatory effect, which are ideal for drying clothes. Yo Shimada has picked up on this element, elevating it to a symbol of a local phenomenon and including it in the design from the outset as an integral part of the floor plan for the house.
First of all, the architects analysed the perception that people have of these annexed rooms, identifying their role as a boundary, a border between the indoor and outdoor spaces, between private and public, between garden and house. The aim of redesigning these “spontaneous” spaces was to make them into interfaces between the home and the external surroundings, to encourage a relationship with them and to allow the so-called physical limits of the interior space to expand in a natural way.
To this end, Yo Shimada chose the south front as the main point of exchange, placing two verandas, or solariums, here: a double-height one on the ground floor, and another on the first floor. These spaces overlook a fragmentary flat front, entirely fenced off by these polycarbonate panels, in which certain sliding sections allow for the family to modify the appearance and, as a result, the very structure of the annexes’ interiors. The translucent polycarbonate modules, which are also used for a portion of the roof, are mounted on slender exposed wooden frames and, where permitted by the design of the façade, can easily be slid along to meet the needs of the inhabitants.
The irregular shapes of these spaces, like those of the other rooms, are the result of choosing to split up the rectangular floor plan of the house with oblique lines which offer greater interpenetration between spaces. If we observe his creations from recent years, double-height ceilings - as used here in the solarium and the living room - can be considered a recurring element in the architectural poetics of Yo Shimada. In the house in Sonobe, as in the other residences, the rooms are large empty spaces in which a handful of furnishings have been carefully placed to define the function of the space. Each of these is always associated with a veranda or solarium, with the aim of mitigating the transition from the public space of the city to the private space of the home. 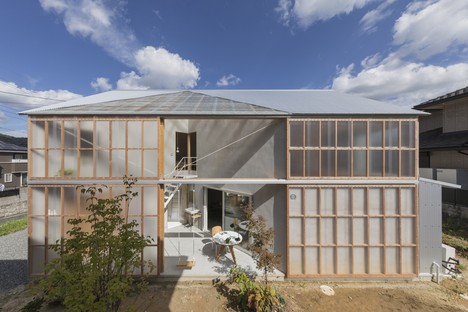 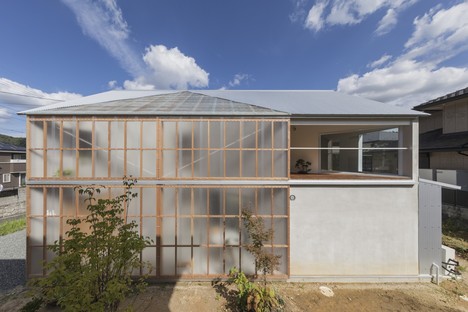 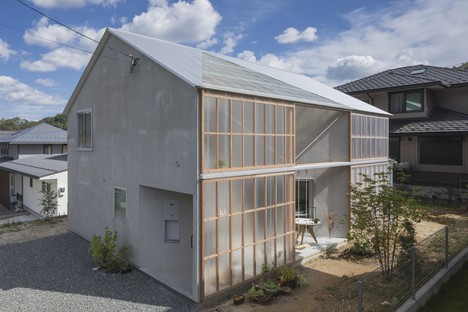 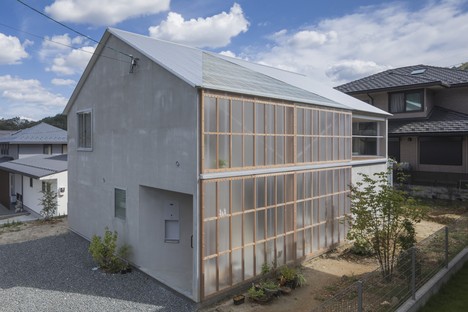 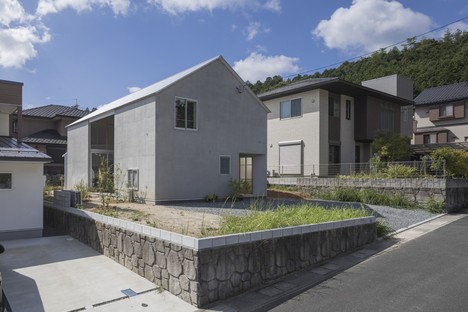 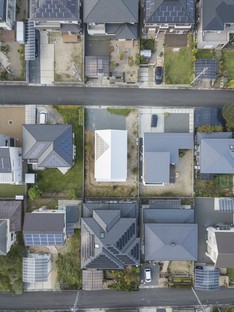 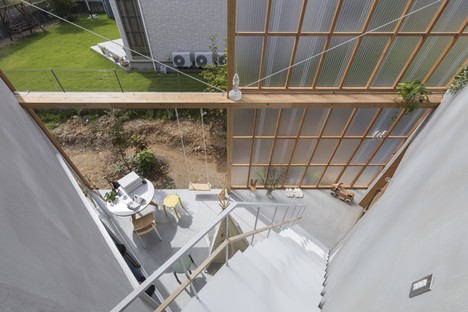 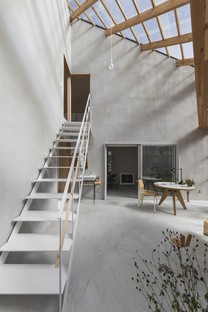 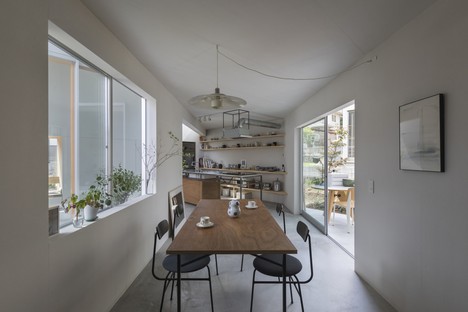 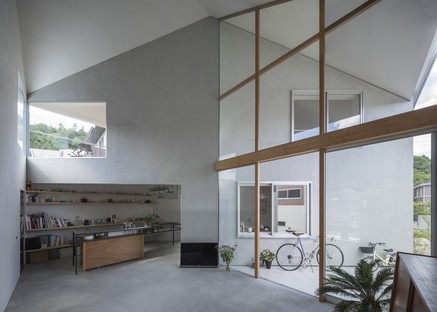 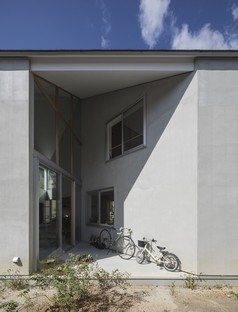 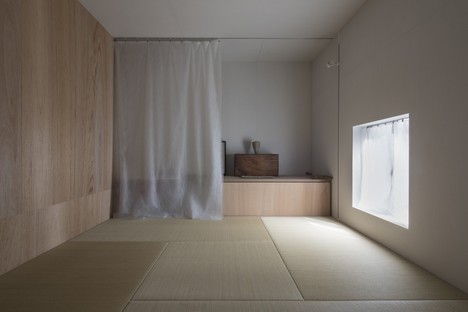 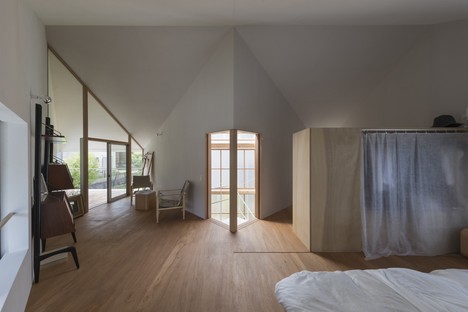 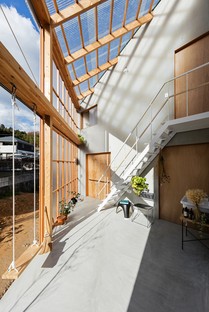 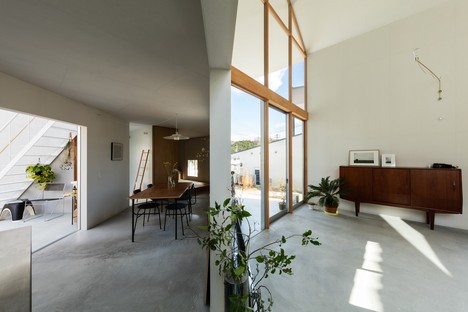 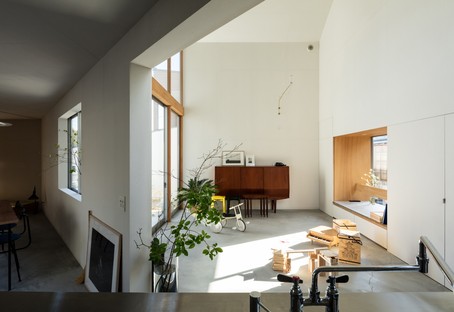 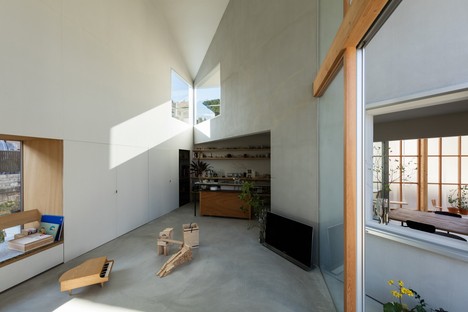 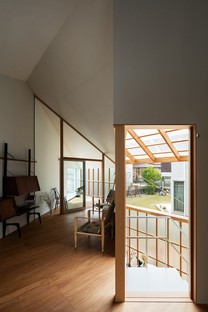 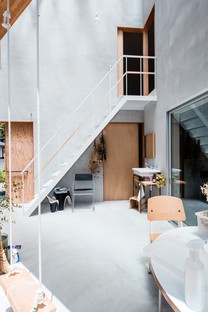 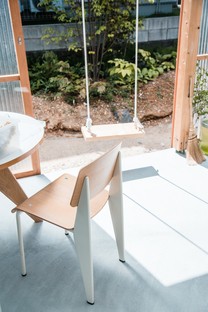 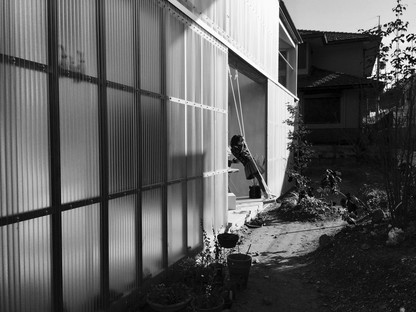 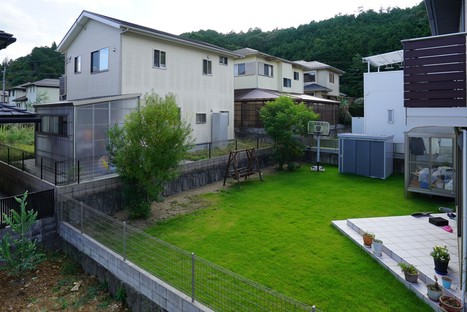 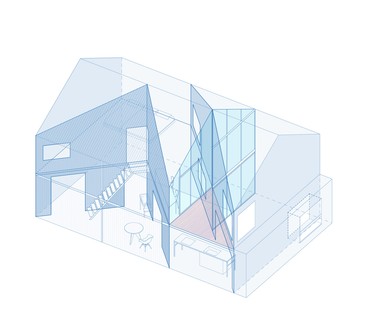 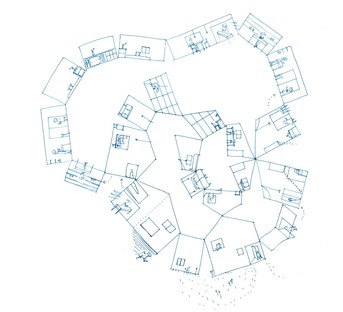 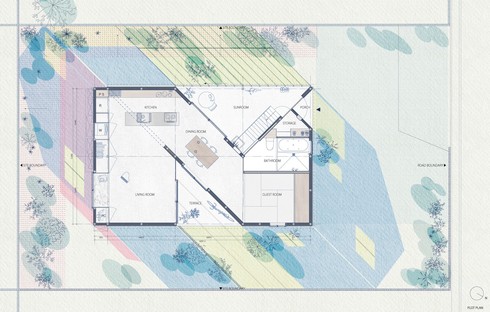 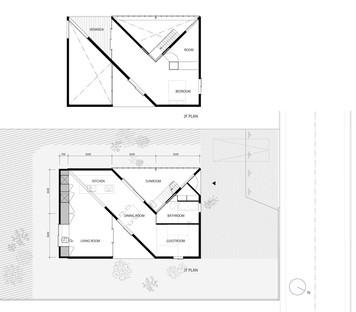