A bookshop run by the well-known Chinese Librairie Avant-Garde brand among the rice paddies of Xiadi, in Pingnan county, Fujian province, China. Hua Li and Trace Architecture Office (TAO) have converted a decaying old house into an unexpected but very popular bookshop with an event room. 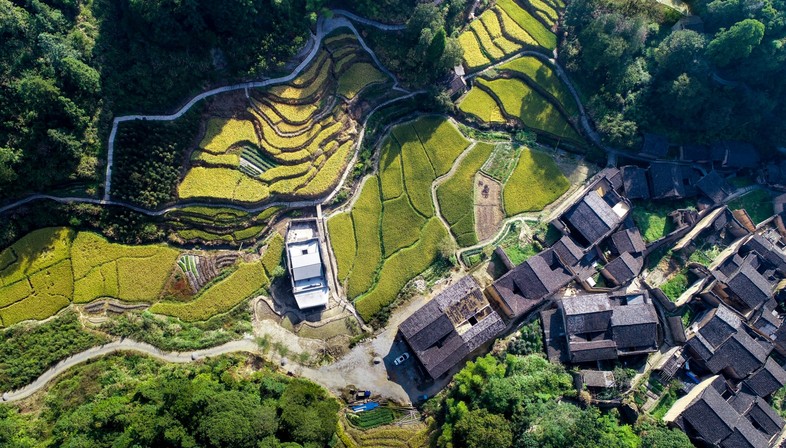 Trace Architecture Office (TAO) designed a Librairie Avant-Garde bookshop in an abandoned, decaying old house in the village of Xiadi, in Pingnan county in the province of Fujian, China. TAO founder Hua Li transforms the building into an interesting shop that has become a new attraction for locals and tourists alike.
To understand the significance of the project, we need to take a step back and specify just what the Librairie Avant-Garde brand means to China. Founded in the second half of the nineties, the chain of bookshops might be seen as China’s response to a growing lack of interest in reading as people turn to digital information sources, a phenomenon we have seen all over the world in the past couple of decades. Right from the first bookstores in Nanking and the surrounding area, the shops have opened in particularly interesting buildings such as an air raid shelter or a deconsecrated church, reclaimed from a state of abandon. Some time ago Floornature presented the renovation of a rural building in the centre of the village of Daijiashan in Tonglu, eastern China. In that project AZL Architects adapted the abandoned building in response to Librairie Avant-Garde’s requirements, creating a gathering-place for both locals and the tourists who are becoming more and more numerous in the Chinese countryside. The new project reflects the same spirit, once again located in a small village, but this time in Fujian province.
As Anna-Paola Pola writes in her essay entitled “«Il villaggio più bello della Cina». Patrimonio, politiche e trasformazioni nella Cina rurale” (“China’s most beautiful village: heritage, politics and change in rural China”, in “I giardini del tè di Dazhangshan” for the 2019 International Carlo Scarpa Award for the Garden, published by Fondazione Benetton Studi Ricerche), after more than a decade of economic reform focusing on urban development, since the year 2000 China has been implementing new reforms intended to boost local economies on a vast scale, making up for the imbalance in development of the country’s cities and countryside. The government is promoting rural tourism with a vast range of tours for rediscovering traditional farming culture as part of a unique cultural identity to be revealed to the world.

This context of preservation and enhancement of China’s rural heritage provides the backdrop for Librairie Avant-Garde’s strategy in Xiadi and Hua Li’s project. Xiadi, in Pingnan county, is a tiny village that has had the good luck to escape the trend toward demolition of older houses to build new constructions that represents the downside to the development of tourism. The village has maintained its greenery, river and mountain roads as well as its oldest buildings, preserving its urban fabric and landscape. The abandoned house in question is located in the northern part of the village, at the level of the river running through it, among the terraced rice paddies just outside the town centre: as the photo of the site before the project shows, all that was left of the house was three walls and an outer wall surrounding a little farmyard, in very poor condition. Hua Li’s project not only preserved the ruins made out of rammed earth, the material the oldest houses in the Chinese countryside are made of, but ensured that these were the only walls to appear on the outside of the building, without adding any volumes that would significantly alter the layout of the construction. The renovations took place exclusively inside, in an empty space that could be filled in and transformed to contain the new functions. The project permits only two exceptions to the rule: the roof and the overhanging volume of the bar, on the basis of particular criteria which we will now investigate.
The ruins serve as a freestanding container, inside which stands a new concrete and steel structure, blending tradition with modernity. The bookstore space is defined by two broken concrete walls supporting two ceiling slabs with spot connections to the original outer walls. This allows light to come in from above and pass along the walls to the floors, lighting up the rammed earth to reveal its wealth of chiaroscuro. This is where the reading tables are located, with the staircase and storage space in the middle. The layout of the floors is governed by perfect symmetry along the longitudinal axis, which links the two historic entrances that bring light into the centre of the building. Along this axis, a steel column rises from the ground up to the terrace at the top of the building, supporting an overhanging gabled roof of timber and steel. The gable roof recalls the shape of the building’s original roof to maintain the thread between history and modernity. But now the roof gives way to a terrace, creating a new opportunity for socialisation in which contemplation of the landscape becomes the main attraction. The steel channels at the four corners ensure lateral stability and convey rainwater into the channels created in the reinforced concrete slab, which slopes inward; according to Hua Li, this shape is based on the system used for draining rainwater in old Chinese rural homes, on the basis of “Si Shui Gui Tang”, a principle of feng shui alluding to accumulation of wealth and prosperity in the home.
But it is by observing the cross sections that we can understand the lightness of the project’s structure: both crossways and longitudinally, the slope of the slab forming the terrace opposes that of the timber roof, lightening the weight of the upper part of the structure, which is supported by the central column. What’s more, the longitudinal cross section adds the contrasting line of the stairs, suggesting that visitors take advantage of the possibility of using different spaces on multiple levels. In the middle of the volume is a stepped space used as a little amphitheatre, as an individual or collective reading area, and for hosting conferences and events. Climbing the stairs in the opposite direction, we come to an entirely overhanging space added onto the old building containing a coffee shop with a panoramic view over the rice paddies and the village. Here the apparent contrast between the concrete of the new structures and the rammed earth of the original house is overcome using wooden formworks (made from local burnt Pingnam pine) which produce a clearly visible pattern all over the surface of the concrete, making it into a warmer, more natural material.
China Daily reports that the bookstore specialises in books about folk art and crafts, development and preservation of rural culture, and local history. It hosts live performances and concerts, and is very popular with adults and children alike. 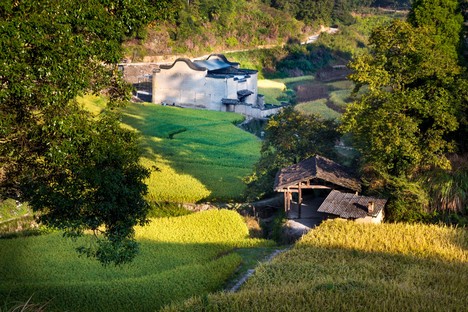 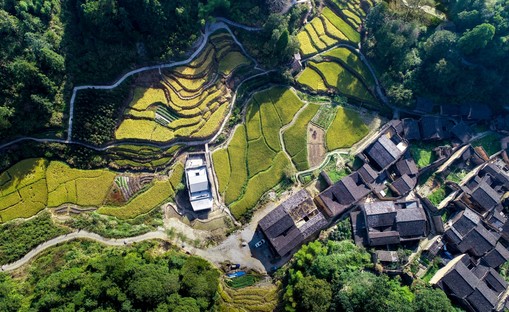 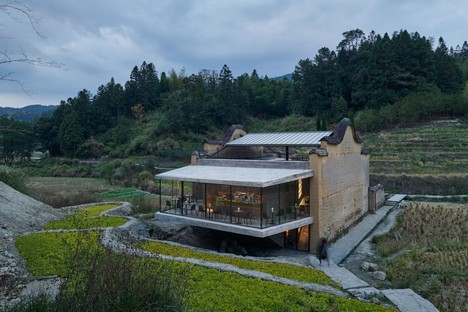 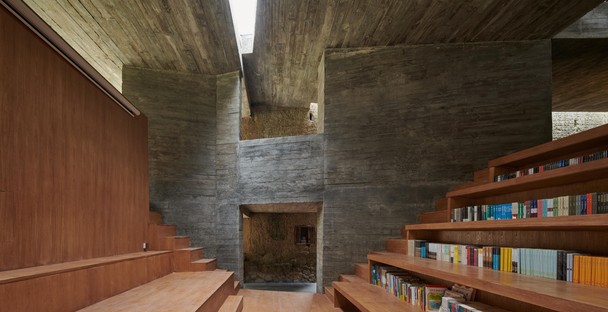 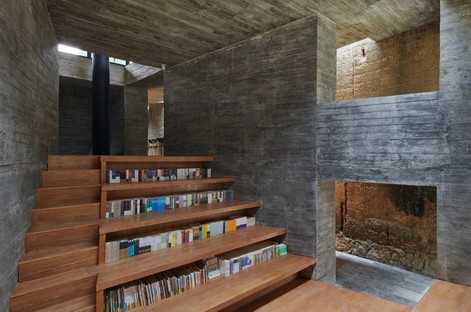 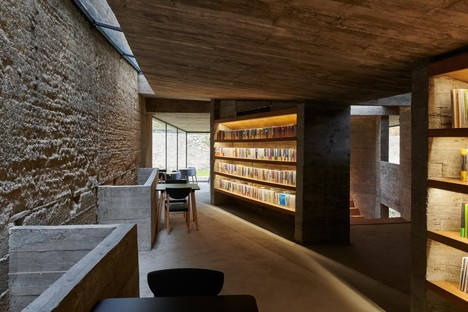 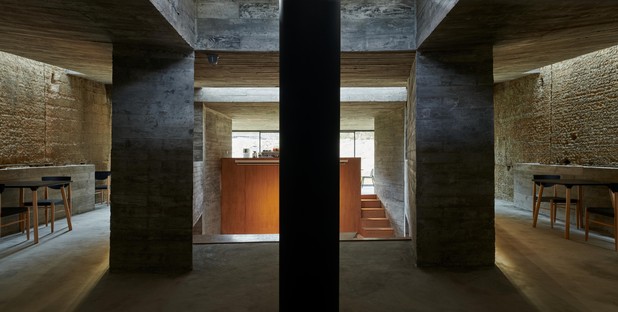 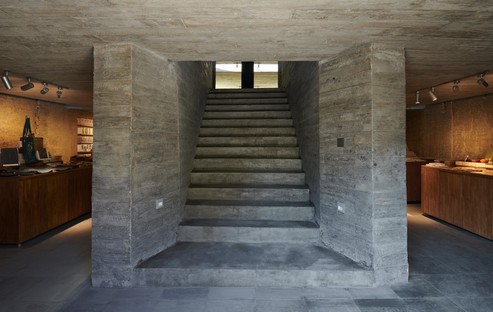 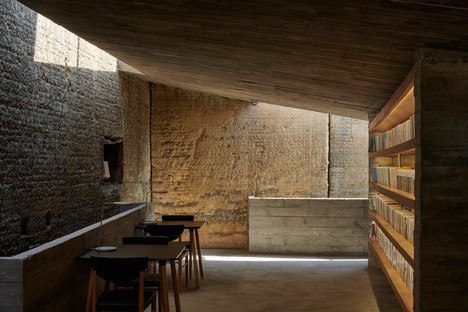 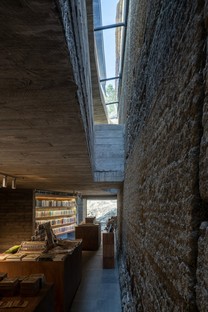 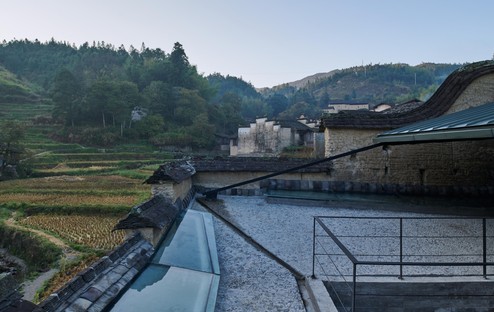 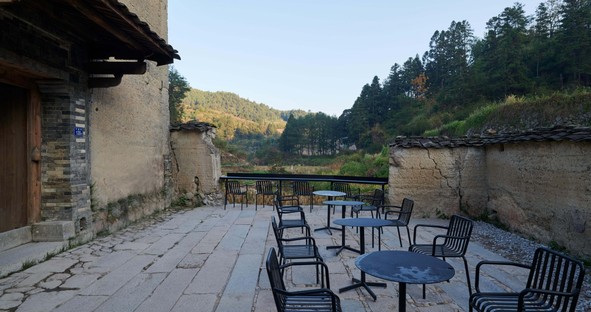 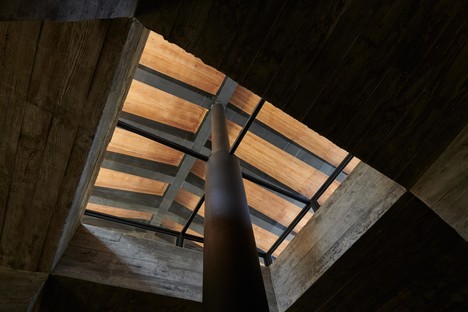 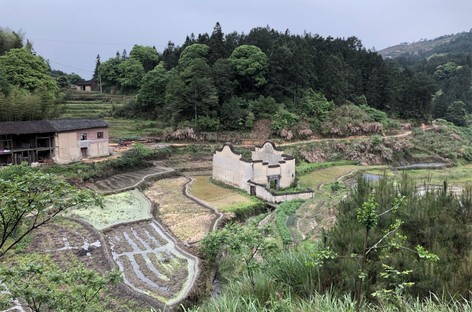 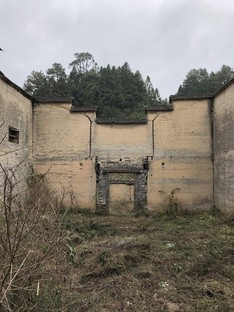 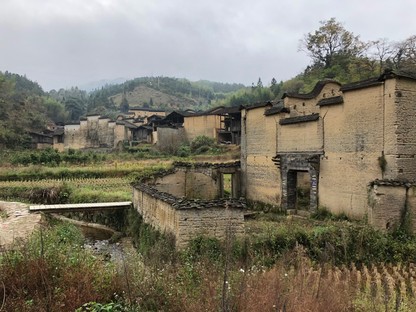 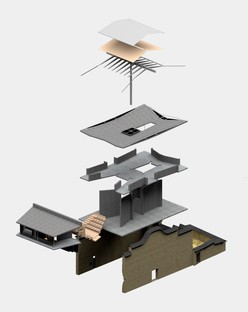 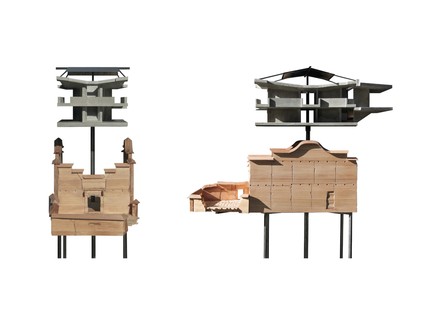 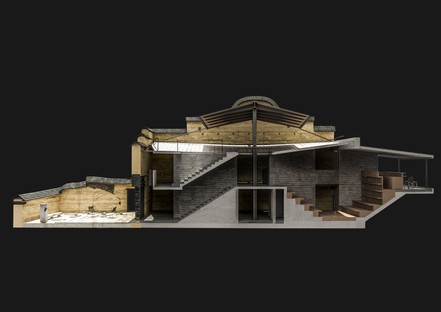 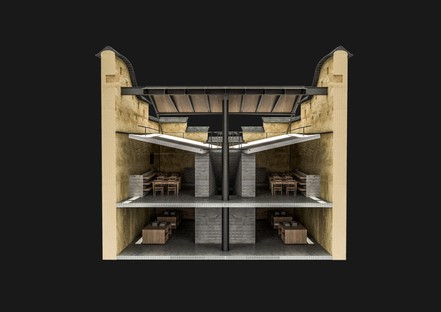 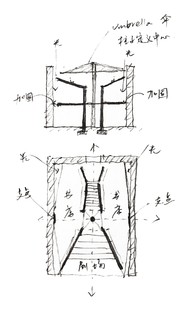 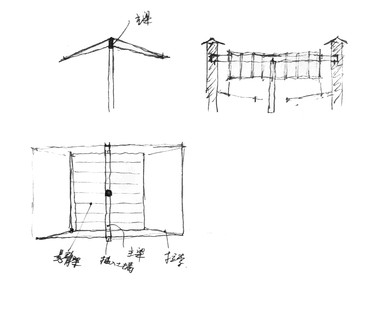 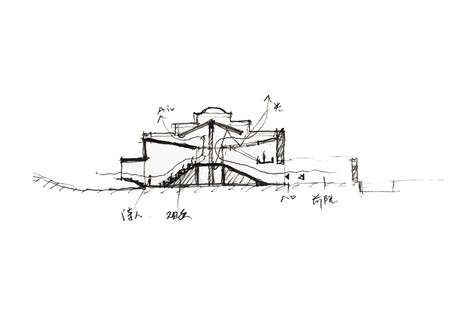 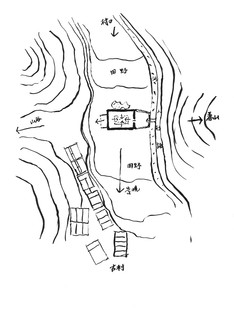 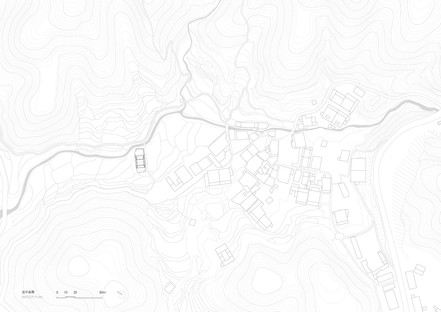 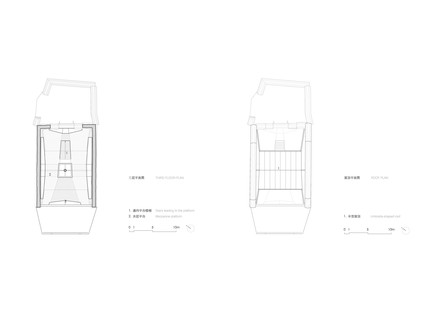 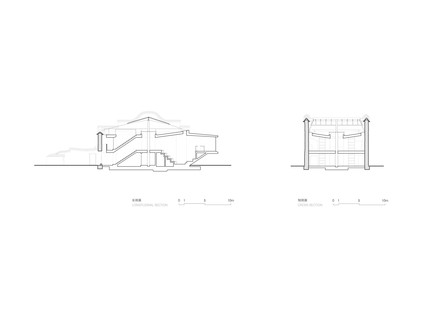