In Shenzhen, in southeastern China, the headquarters of the Shenzhen Rural Commercial Bank, designed by the Skidmore, Owings & Merrill (SOM) architectural firm were recently completed. The building is a 158-metre-tall, 33-story tower built on the edge of a public park in one of the main commercial districts of the modern Chinese metropolis. To meet the comfort needs of the building’s indoor spaces – taking into consideration the warm tropical climate of this region – the architects adopted solutions that respect the principles of sustainability and biophilia. 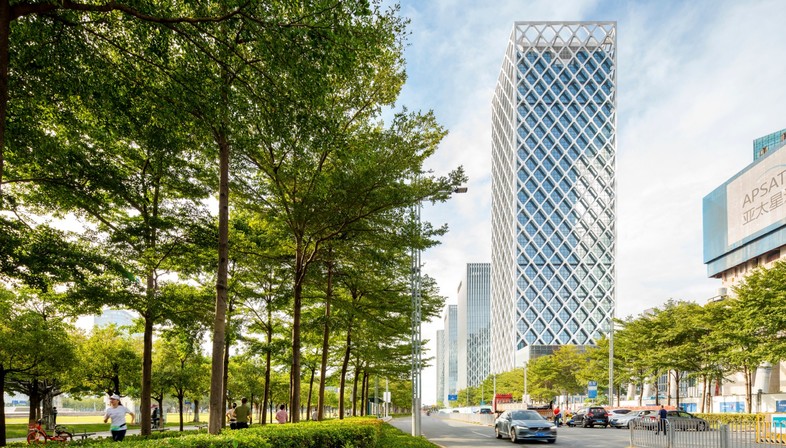 The headquarters of the Shenzhen Rural Commercial Bank, designed by the Skidmore, Owings & Merrill (SOM) architecture studio and recently opened in Shenzhen, in southeastern China, have been defined as a "breathing" building. The bank’s new headquarters are a 158-metre-tall, 33-story tower built in one of the main business districts of the modern Chinese metropolis and located near a large public park.
The SOM architectural studio was entrusted the project back in 2012. The clients had asked the architects to design a building that would project the bank into the future, while at the same time recalling its history as a rural credit union.
A project that is a perfect synthesis between architecture and innovative engineering solutions – the distinctive feature of all projects designed by the SOM studio – and in which solutions respectful of the principles of sustainability and biophilia have been carefully adopted to deal with the warm tropical climate typical of the region. The element that most characterises the bank’s new headquarters, transforming them into a true landmark for the neighbourhood, is the external diagrid structure that envelops the building’s façades and plays a double function: as a large brise-soleil that protects the building from the strong tropical sun but, above all, acting as the tower’s supporting structure. The diagrid structure thus becomes an exoskeleton that allowed the architects to free the internal spaces from vertical supports, ensuring maximum flexibility in terms of the planimetric organisation of the work areas. At the base of the tower, the network of diagonal beams that make up the diagrid structure widens to create entrance points into the building and frame beautiful views of the nearby public park and the scenic Qianhai Bay.
Architects from the SOM studio designed the interior of the building drawing inspiration from the principles of feng shui and the three essential elements it incorporates: earth, water and air. The earth reference is evident in the marble cladding the tower’s elevator core. The air element, on the other hand, is embodied by the natural ventilation system that ensures fresh air both in common areas and in the office spaces. The building breathes thanks to the two atria that span the tower vertically and along its full height. On each floor, in fact, employees can open or close the circulation outlets, allowing the fresh air coming from the atria to be diffused in the various environments. Finally, water – which in feng shui represents the flow of money, as well as of ideas and relationships – was selected as the main element characterising the entrance spaces. The lobby is encircled by a reflecting pool and, adjacent to the main entrance, a rippling wall of water has been created. Moreover, the transparent walls of the lobby create a 15-metre-tall "rain curtain" where water cascades on small translucent filaments. Thanks to these solutions, on hot summer days these water features provide an evaporative cooling effect for the entire building, with considerable energy savings. The reference to water is also found in other elements such as the lighting fixtures that recall large suspended rain drops, as well as in the marble wall cladding, in which the smooth finish evokes the polishing effect of water on stone. 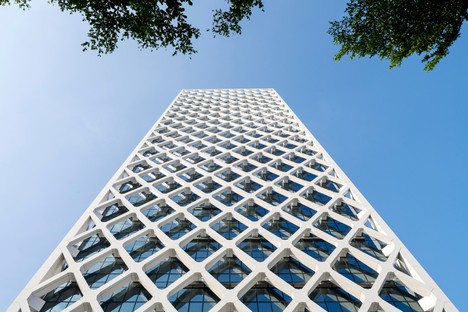 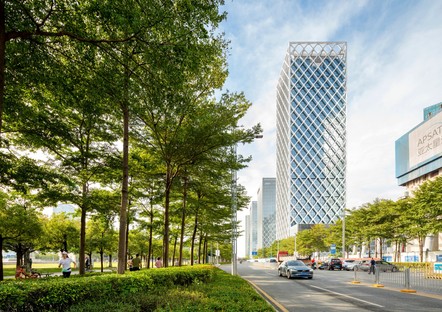 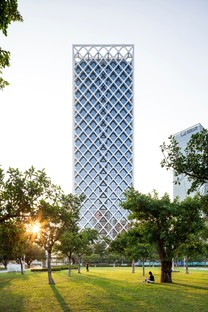 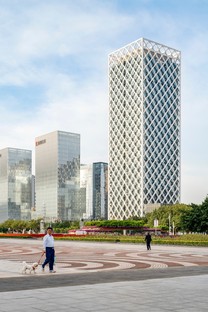 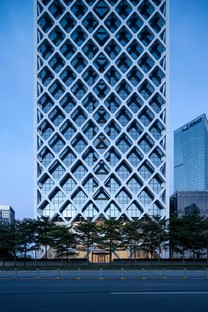 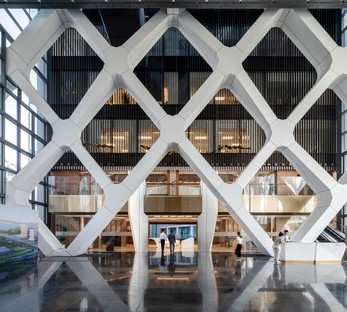 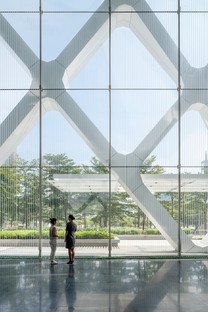 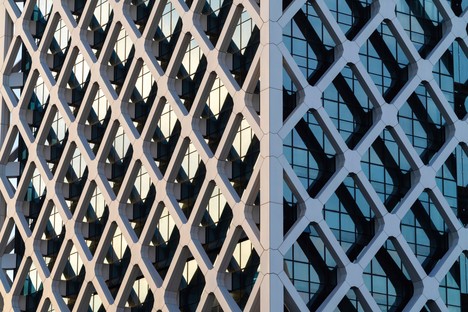 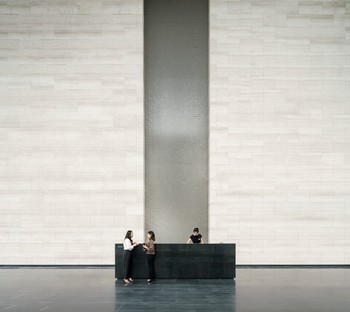 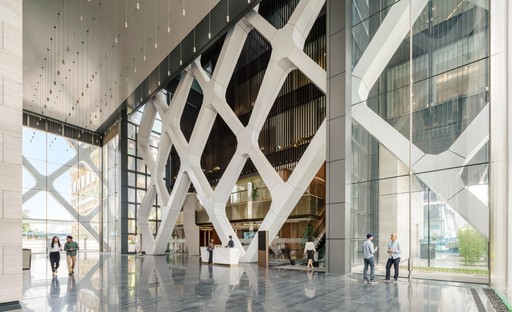 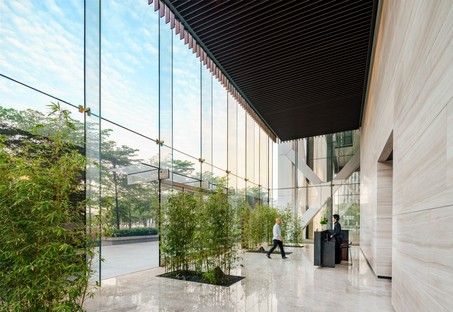 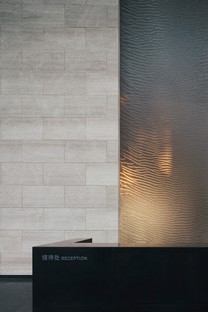 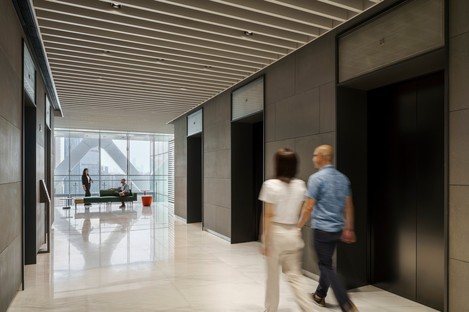 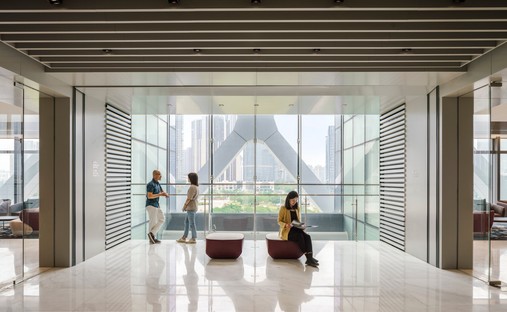 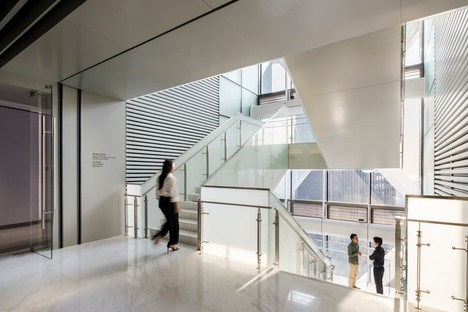 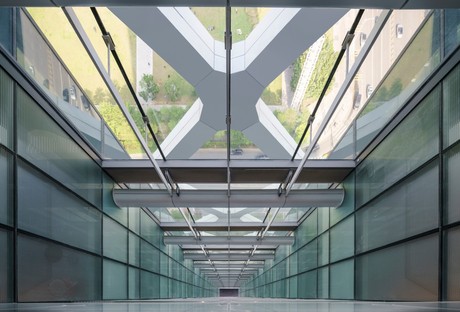 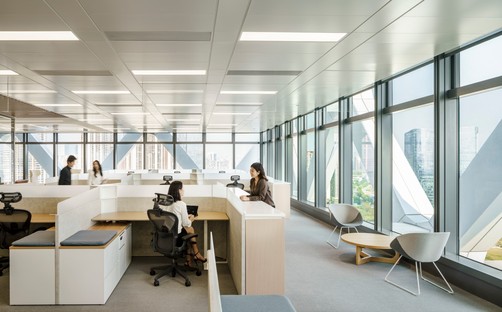 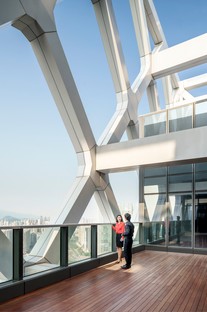 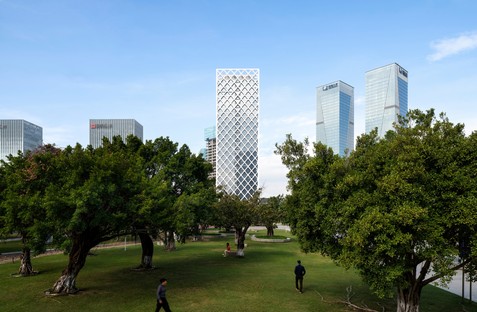 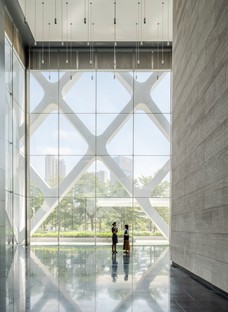 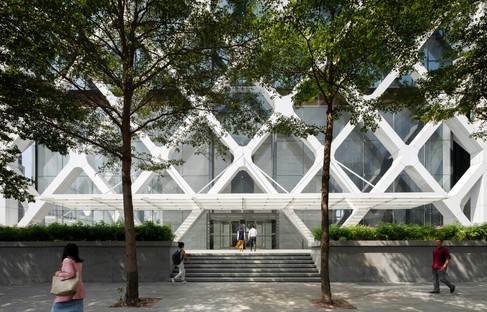 Skyscrapers in 2019 - the CTBUH Annual Report