Assiduously used by half the population of the city of Calgary, in Canada, the central library now has new premises designed by Snøhetta+DIALOG. The ambitious mission of Calgary Central Library is to stitch back together the city’s Downtown and East Village. 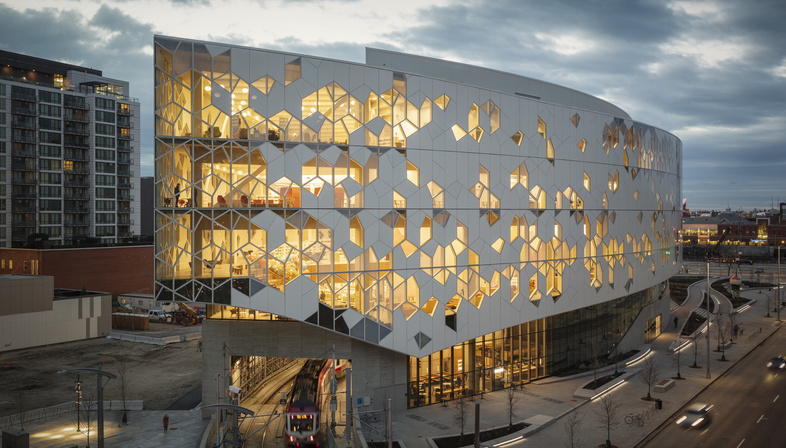 To replace the original central library in Calgary, Alberta, Canada, well-known Norwegian architectural studio Snøhetta, working with Canadian studio DIALOG, has designed a new building representing the city’s commitment to the promotion of culture as a vehicle for the progress of society. The power of books and knowledge reveals all its power in the new Calgary public library, which not only creates a free, welcoming spiritual community but geographically unites parts of the city that were in the past separated by infrastructure constructions.
The Calgary Municipal Land Corporation held a competition in 2014 and offered funding representing the city of Calgary’s biggest public investment since the 1988 Olympics. Snøhetta+DIALOG’s new library, inaugurated on 1 November 2018, offers a new location for one of North America’s biggest library systems, for more than half of the residents of Calgary are active cardholders. In line with the latest concept of the library as a focus of civic value, strongly oriented toward receiving and encouraging feedback from users, the Calgary Public Library reflects its user community, offering a great variety of spaces where everybody, from the youngest to the oldest readers, from those in search of silence and privacy to those who enjoy interaction, can find their own dimension and spend time, feeling that they belong perfectly in this space and community.
To achieve this important goal, the first thing the architects had to consider was the library’s position in the city. The building is in the centre of Calgary, right where the city’s Light Rail Transit Line divides Downtown from the East Village. The architects wished to overcome the division created by this infrastructure by taking the rail line underground and building the new library over the top of it. The arched layout of the structure, which is mirrored to form a drop shape or pointed ellipse, as the architects describe it, is merely the result of the underground curve of the rail infrastructure, which continues underground until 12th Ave SE, where it emerges back on the surface. The project makes the train disappear “into the bowels” of the library, as if swallowed up by it, taking its energy and visibly releasing it on the building’s walls, broken up into hexagonal panes of glass which look almost as if they are peeling off the walls, eroded by time and wind.
The library is a building of great evocative power, a visual landmark of intrinsic dynamism that cannot help but reinforce the idea of modernity and cultural ferment people will find inside it.
Built on four levels (plus a mezzanine), the building opens up on the ground floor to let the rail line pass through and go underground, while on the second level it forms an arch with a wooden intrados (a double shell with Western Red Cedar beams from nearby British Columbia) opening onto the big plaza below, where the main entrance is located. Connected to 8th Ave on the east and 31st St on the west side of the building, the library is a covered urban plaza, a pedestrian link between Downtown and the East Village. The building rises into the air with slopes and terraces inspired by the mountains outside the city, forming a definite urban landmark with its deconstructed look. The interior also draws inspiration from the landscape, with a bare concrete structure in which wooden surfaces rest against a series of bare pillars inspired by the stoà, the open-air colonnade which served as a place of aggregation and intellectual discussion in ancient Greek architecture.
The big, well-lit foyer enjoys natural light from the windows at the sides and above, with a sweeping view of the whole interior to help visitors orient themselves in the building, aided by two arches around the sides indicating a privileged direction shared by all levels in the building. The floors are effectively organised on the basis of a rising programme, from public events and children’s activities to private reading and research work. At the top is an oval room with a big translucent skylight, the Great Reading Room, for work requiring silence and concentration.
Completely transparent, like the bow of a glass ship on an urban sea, the building’s northern tip offers a view over the two districts of Calgary outside, while the lit-up building confirms its expressive power at night. 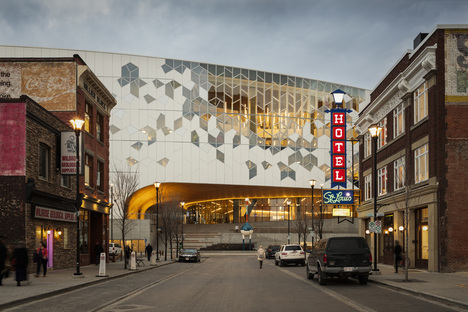 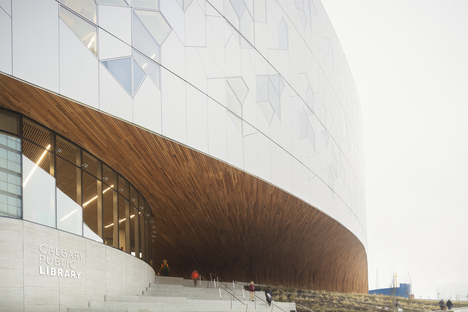 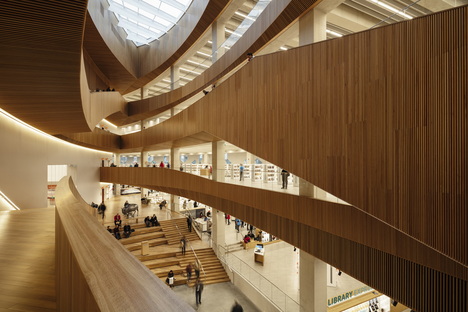 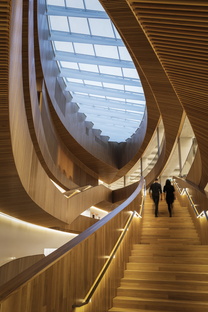 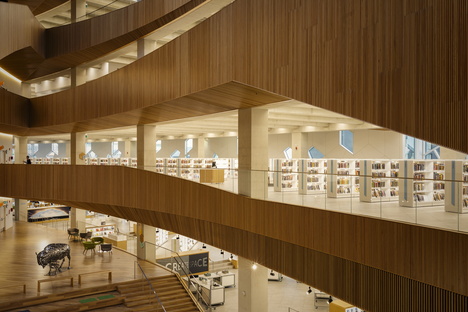 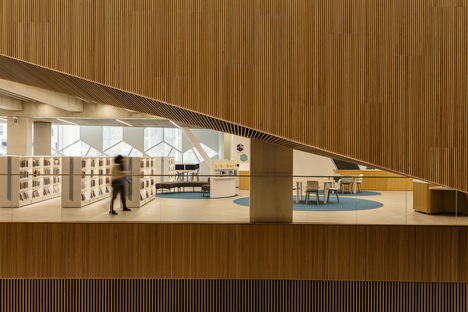 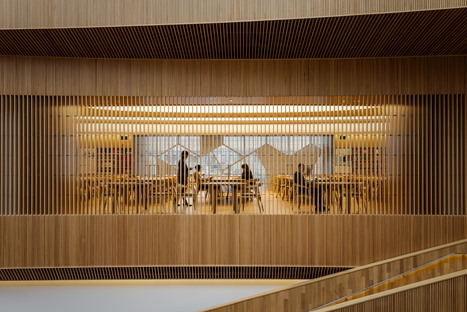 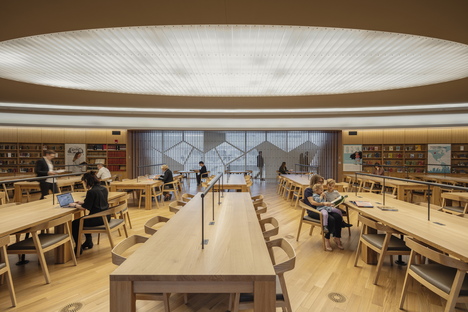 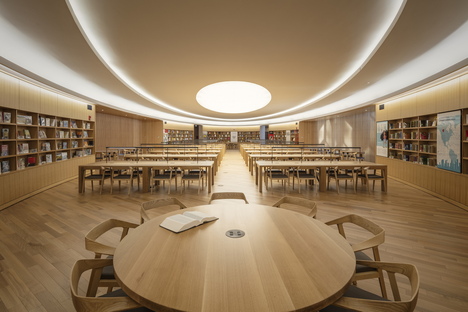 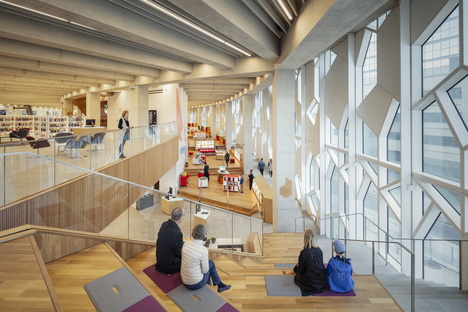 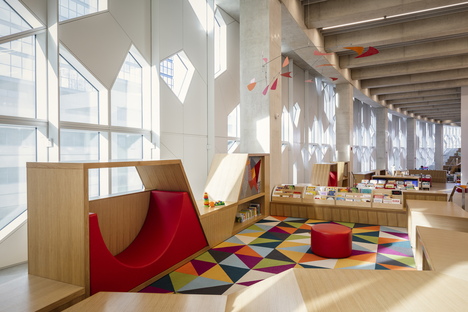 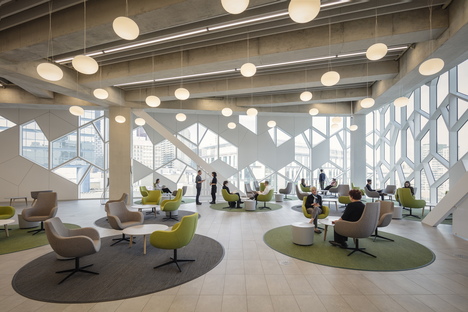 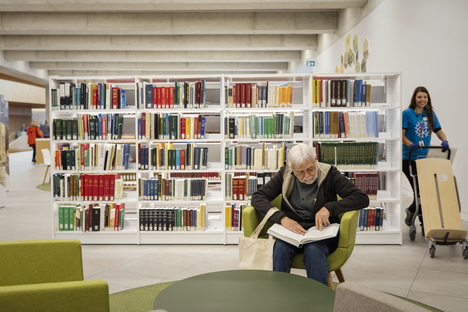 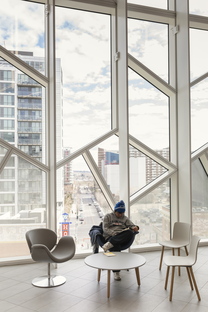 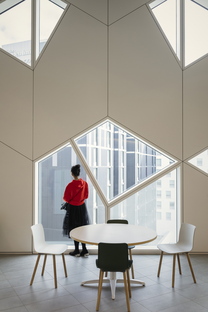 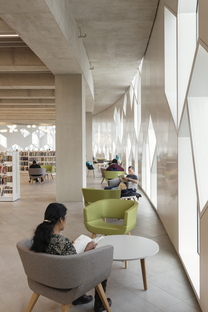 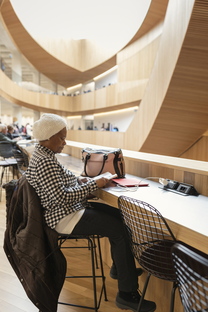 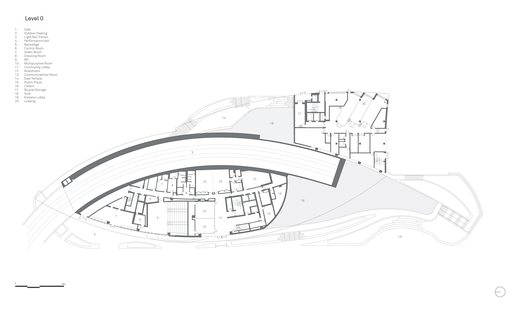 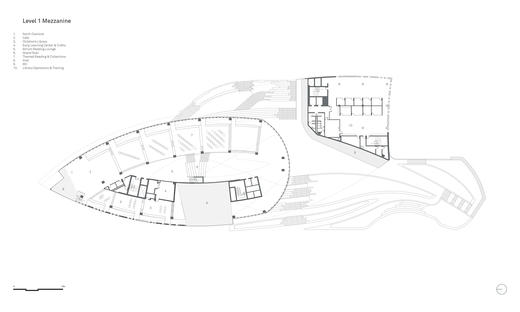 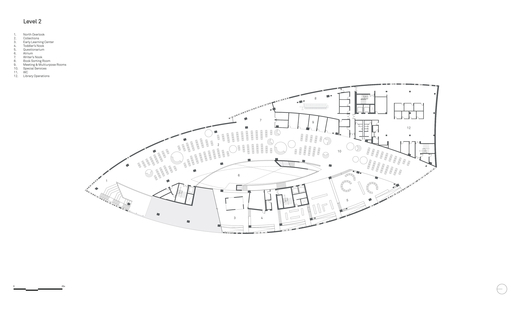 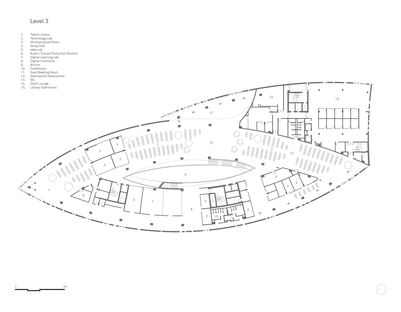 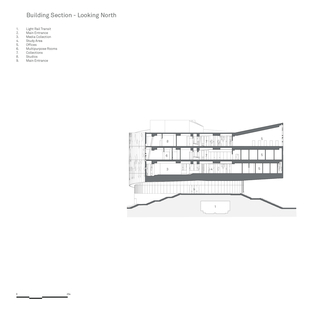 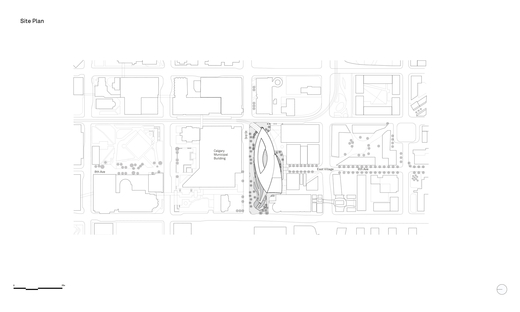