Shigeru Ban designed the villa in Sengokubara in the style of Japanese contemporary architecture. The home is made entirely out of wood, a material the architect is particularly fond of, and its form takes advantage of the site’s flagpole shape. The home is closed off from its surroundings, with the rooms arranged in a radial manner around the interior courtyard. 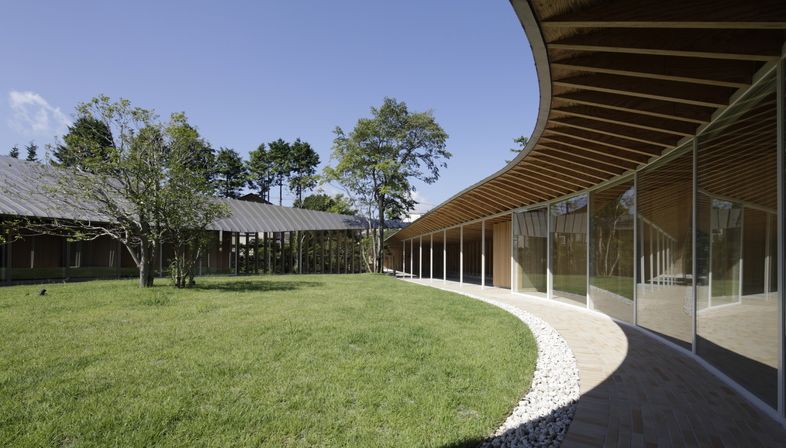 The villa at Sengokubara, Hakone, near Kanagawa, is one of the most important examples of contemporary residential architecture in Japan. The only structural material used in Shigeru Ban’s design is timber, and the home makes the most of the space available in the flagpole-shaped site on which it is built.

Many Japanese architects are now focusing on the best way of building homes in the city in the presence of widespread restrictive limitations. The high cost of scarce land and building regulations that permit construction of houses very close together have led to a hermetic form of architecture which is cut off from its surroundings and entirely focused on internal routes.

The walls of the Sengokubara villa are the boundaries within which life unfolds in the home: only a few small windows provide views of the outdoors, and the need for contact with nature is met by a garden courtyard onto which all the windows open. Shigeru Ban has come up with a new evolution of the Japanese archetype of the “box” home, creating a large empty space in the middle of the square layout for the garden; a tree marking the centre of a circle 15 metres in diameter is the focal point for the view from every room in the home.

A long walkway runs from the entrance on the western side past the parking area to the covered area where the residential spaces begin. These premises, organised in the areas included between a square outer perimeter and a round inner perimeter, are arranged radially around the centre, and all the walls and columns in the structure follow this course, as do all the boards in the roof. The latter follows a continuous curve which starts off flat at the entry and gradually slopes inward, to the point of turning over on itself and ending, creating an orderly, coherent space in which each element seems to dance with all the others to achieve a greater harmony.

The visual reference is the compluvium of Greek, Etruscan and Roman homes, which conveyed rainwater into the impluvium and lit up the entrance hall. In Shigeru Ban’s project, the sloping roof lets rainwater flow into the garden, while sunlight flows copiously in to irradiate not only the garden but the rooms opening onto it. The entire home is a portico, in which the walls facing the garden are floor-to-ceiling sliding glass doors. The space between the courtyard and the interiors is united, as testified by the use of the same brick floor in the rooms and the pavement around the courtyard. Boundaries between inside and outside are eliminated, as the wooden frame extends to blend into the furnishing, the tall bookshelves on the back walls and the internal walls radiating outwards.

The family must be sheltered from the outside world, but they also require contact with nature, the basic traits of which are synthesised here and reconstructed almost artificially inside the home. 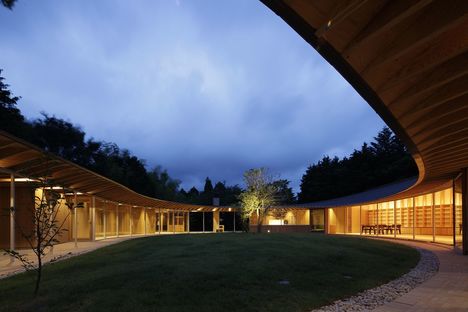 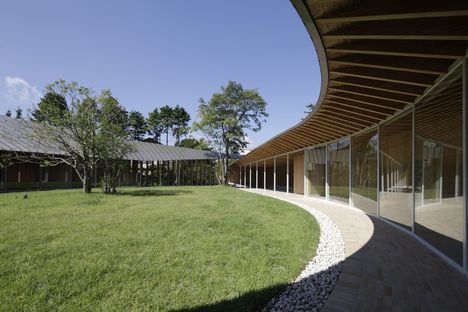 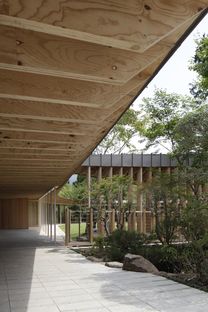 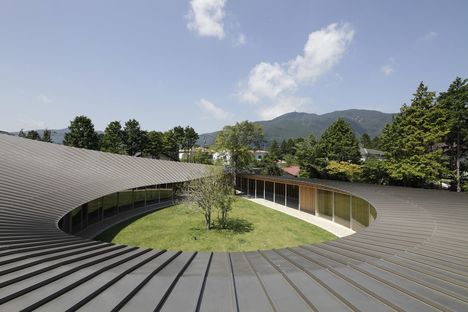 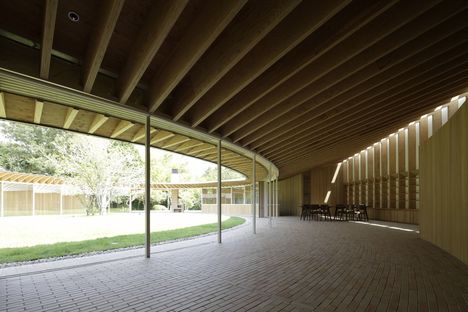 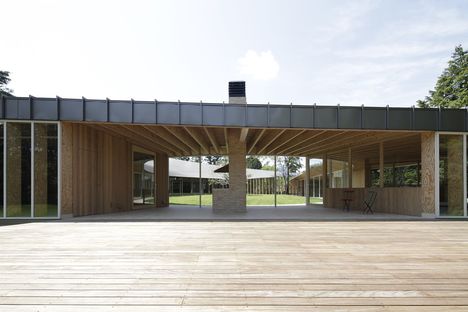 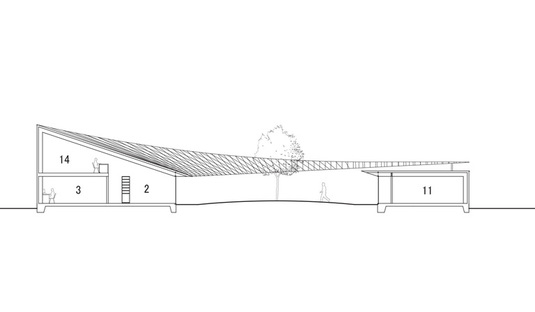 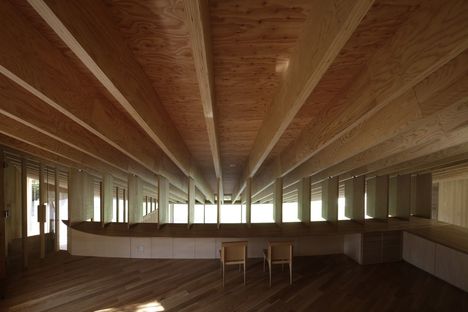 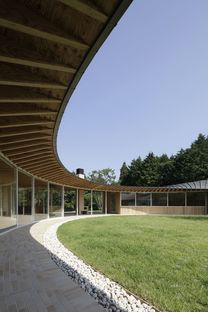 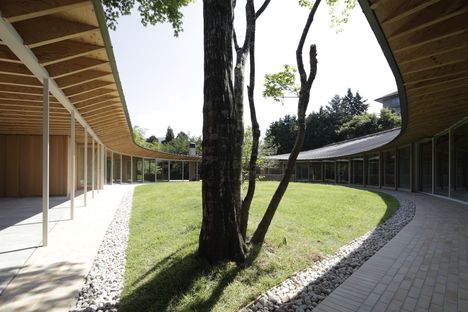 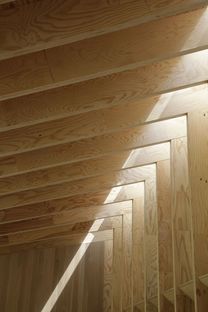 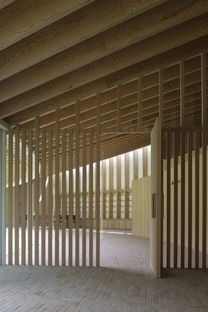 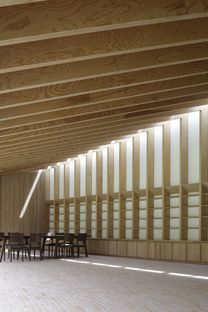 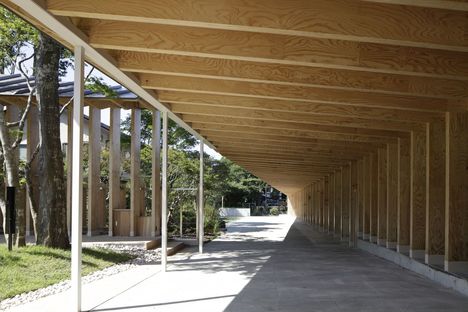 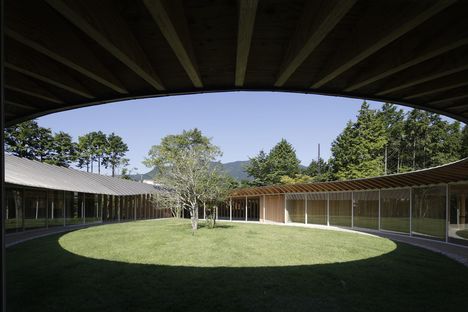 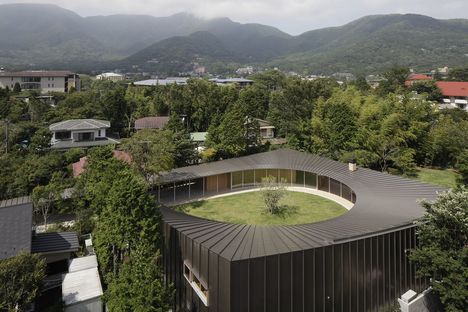