Admiring the iconic view overlooking Sugarloaf Mountain, the famous mountain symbol of Rio de Janeiro, was the idea behind the interior project recently designed and completed by the Brazilian firm Reinach Mendonça Arquitetos Associados. The project focused on the restructuring and redevelopment of a business centre built in the 1970s, without particular architectural merits, in the Botafogo Beach district in the southern area of the city.

Together with the famed Christ the Redeemer statue, Sugarloaf Mountain is one of the symbols of Rio de Janeiro, as well as of the entire country. It was therefore natural for the architects of the Reinach Mendonça Arquitetos Associados firm to attach great importance to such a key element of the natural landscape in one of their most recent interior design projects: the office building designed for the law firm Souza Cescon (SC Office). 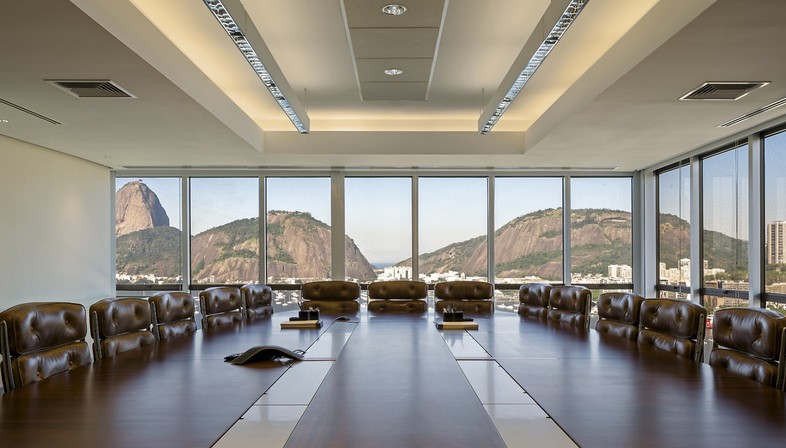 In the Botafogo Beach district, in the southern area of Rio de Janeiro, law firm Souza Cesco selected the old “Argentina” building as the location for its new branch office. The Argentina building was built at the end of the 1970s as a business centre. Architecture firm Reinach Mendonça Arquitetos Associados, which previously designed the law firm’s headquarters in San Paolo, was selected to design the interior design project for the firm’s the new branch office.
The original building was built in 1978 during the so-called Brutalism architecture period. The building showed the typical central line distribution and the two elevator blocks organisation characterising the particular historical period. According to this organisation, all the reception areas for customers and users were located in the central part of the building, next to the elevators and without windows to the outside. Dark spaces, far from windows and natural light sources.
The architects’ first decision was therefore to reverse this logic by recovering what was considered as the most valuable element of the building: the panoramic view over the natural landscape that surrounds it.
The iconic view over Pão de Açúcar (Sugarloaf Mountain) became the strong element characterising the new project. In order to make this possible, architects intervened on the central axis of the building, widening and extending it to the main façade facing the ocean. At the end of the path, a glass wall was constructed that immediately captures the attention of visitors, customers or users who access the floor. This effect is enhanced by a mirror wall, which duplicates the landscape and at the same time enlarges and doubles the perceived size of the context, maximising the overall effect.
On the opposite side of the central circulation axis, the architects designed a secondary entrance and service spaces for employees, delimited by suspended shelving elements. The shelving also defines the large open space with shared tables. The large shared area leads to the lawyers’ private offices. The conference rooms, on the other hand, are located on the sides of the reception area, aligned with the main façade and facing the iconic view over Sugarloaf Mountain.