January 28 saw the presentation of the project by Diller Scofidio + Renfro (DS+R) and Stefano Boeri Architetti, winners of the international architecture competition announced in November 2019 for regeneration of the real estate complex at Via Pirelli 39. The project is part of a plan for redevelopment of a vast area, practically a whole city district, which began with Gioia 22 and will be completed in the years to come with projects for the Pirelli 35 and Gioia 20 buildings. 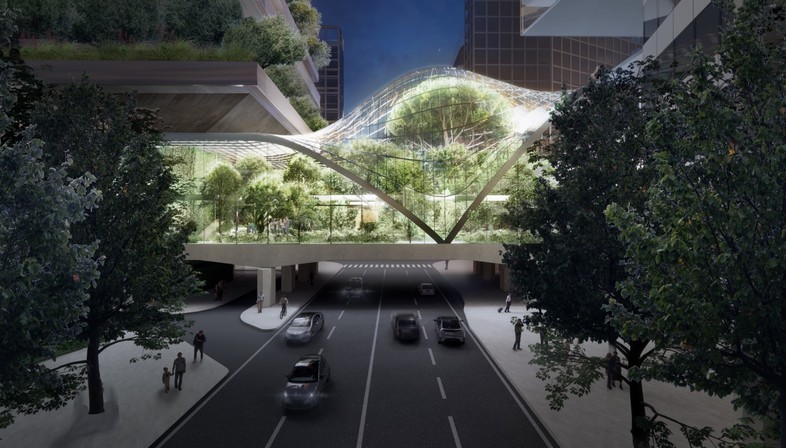 The project presented by Diller Scofidio + Renfro (DS+R) and Stefano Boeri Architetti has won the international architecture competition for regeneration of the real estate complex located at Via Pirelli 39 in Milan. The properties were abandoned by the city government in March of 2015 because they did not meet the requirements of today’s standards and certifications, and suffered from structural issues and degradation, as well as being inefficient for today’s uses. The redevelopment project will not only update the buildings but fit into a wider-ranging process of regeneration of a vast area, an entire district of the city of Milan: a process that began with the Gioia 22 projects and will continue in the years to come with Pirelli 35 and Gioia 20. The Pirelli 39 complex is in fact located in a strategic position in the centre of the Porta Nuova Gioia area, between Milan’s main railway station, Stazione Centrale, to the east and the former Scalo Farini railway yard to the west, a position that makes it a natural gateway to the Porta Nuova district for anyone heading toward the city centre from the north.

The international architecture competition announced on 25 November 2019 attracted 70 groups representing a total of 359 architecture, landscape/urban design and engineering firms from 15 different countries, not only in Europe but as far away as China, Colombia, Japan and the USA. The finalists included, in addition to the winners, 3XN (Denmark), David Chipperfield (England/Italy), Heatherwick (England), Vittorio Grassi (Italy), and Wilmotte (France). The judges chose the project entered by Diller Scofidio + Renfro and Stefano Boeri Architetti: “The two studios showed a strong alignment on the principles of sustainability, correctly interpreting the guidelines of the competition, with a particular focus on environmental impact, continuity with the urban transformation of the area, innovation, community activation, the relationship between nature and the city”.

The two studios’ redevelopment of the real estate complex involves reclamation of two existing buildings, a tower block and a bridge building over Via Melchiorre Gioia, along with construction of a new tower.
The new complex will contain a mixture of public, residential and office spaces and will be aligned with the EU 2050 targets for operative CO2 emissions and meet the requirements of the principal sustainability certifications (LEED Platinum, WELL Gold, WiredScore). The existing tower block, following upgrading of its installations, structures and energy performance, will contain innovative sustainable offices in line with EU Next Generation parameters. The bridge building has been emptied out and redesigned to create a light form of architecture offering a new hub for the city. It will contain a biodiverse greenhouse and become an extension of the Tree Library, as well as a laboratory for the study of climatic and environmental impact, and an event and exhibition space. The new building will be a residential tower with 1700 square metres of vegetation planted on the façades at different levels, creating a living natural wall that changes colour with the seasons and produces as much oxygen as 10 thousand square metres of forest. 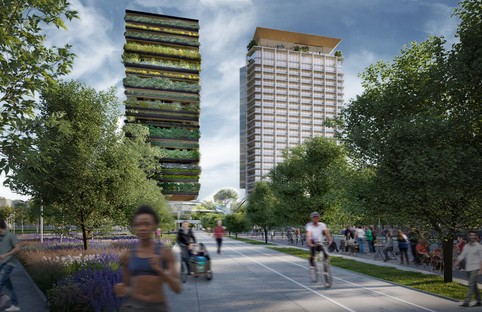 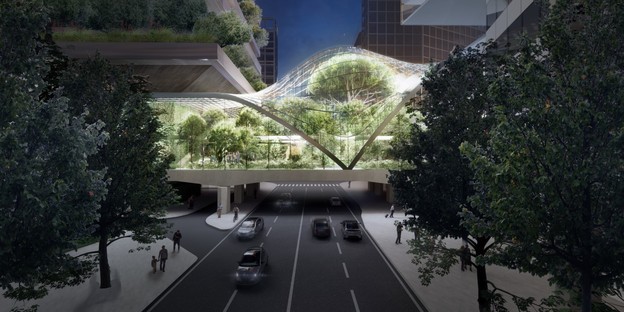 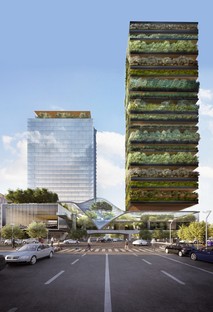 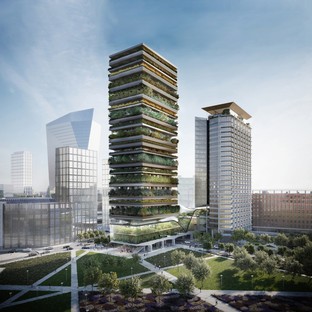