A former tram deposit in Prague’s Smíchov district has been redeveloped for commercial use. The building’s historic industrial façades now form the “base” of a multi-storey glass building covered with expanded metal. Five is a new landmark designed by Qarta Architektura. 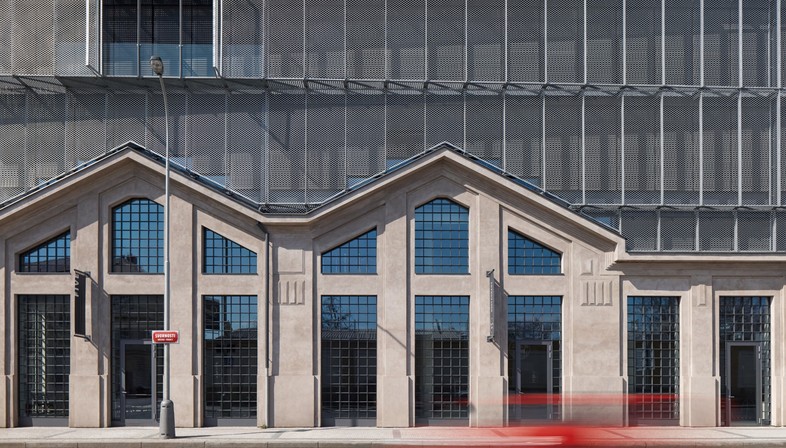 A project that will go down in history under the name Five located in the Smíchov district, in Prague 5, preserves only the portion valued for its historic interest of a former tram deposit, later used to store electric trolleys, on the edge of the city. In the real estate operation by general contractor SKANSKA, Czech studio Qarta Architektura was appointed to redevelop a large area on the corner of Na Valentince and the high-traffic Svornosti along the river, in the western part of the city. With the goal of making an urban space that had been abandoned for some time useable again, five new floors were constructed on top of the old building with a panoramic terrace at the top, preserving only the façade of the historic construction facing onto the street. Thus the area originally occupied by the tram deposit was transformed into a multi-storey building more in line with the scale of the neighbourhood today. Information found on the internet helps us reconstruct the history of the site, where a building with wooden trusses was built in the late nineteenth century to serve as a third deposit for the city’s horses and carriages adjacent to the railway station on the Plzeňská – Západní line. When horses and carriages were replaced by electric trams in the early twentieth century, the original volume was demolished and replaced by a second building, which was still standing when Qarta Architektura approached the site.
An outlying district with an industrial vocation, a large portion of which came to be occupied by tracks and freight yards, Smíchov has evolved into a business district of offices, shops and residential buildings, symbolised by the dynamism of the glass façades of Jean Nouvel’s Golden Angel. The architects report that urban development of the area and construction of new streets gradually “suffocated” the site used for transportation infrastructure, actually making it unusable by failing to include it in planning initiatives. For a long time the industrial building on a single level with big glass windows was considered difficult to convert for any other purpose and left to decay even as the city grew and changed around it.
The architects considered the possibility of incorporating the historic volume in a unified complex on the same scale as the rows of buildings standing on the streets of the area, which had risen much higher over the years with construction of new mixed residential and commercial developments. Six levels were therefore added above ground, the last of which is set slightly back from the others to reduce the perceived height of the complex when seen from below, while three underground parking levels were also added. When viewed from the back, or from inside the block, the element that stands out is the brick chimney, symbol of the factories that rose in the area after the railway yard was built. The next step resulted in new uses and categories more appropriate for revitalising the area, introducing a shop and a restaurant (the Five) on the ground floor and allocating the upper levels to office space. Preserving and restoring the historic architectural elements was very important to maintain the site’s industrial identity and preserve the memory of its history.
The former tram deposit was therefore completely emptied out inside, maintaining only its longest walls on Na Valentince and Svornosti. What was originally a base in relief was cut to extend the size of the windows between the pilasters, creating large windows so that the interiors would have a closer relationship with the street. The building’s historic colours were not preserved, but covered over with a layer of grey plaster reflecting the cold, hi-tech hues of the new expanded volume, which rises up imposingly over the historic construction – which could now be considered its “base” - dematerialised with transparent façades completely covered with strips of a skin of square expanded metal. In terms of energy consumption, this is a double glazed insulated façade with a perforated metal sunbreak capable of reducing the impact of the sun’s rays while ensuring a certain degree of privacy, without limiting the quality of natural light. The geometric severity of the new volume, covered with cantilevered metal modules, contrasts with the historicist architectural style of the former tram deposit despite its industrial character, but it is precisely this difference that makes the street front so attractive.
The project is very similar to that which Qarta Architektura created for the new auditorium outside Jihlava Polytechnic, an early twentieth-century building in which vertical strips of aluminium provide cladding and hi-tech decoration for the new structure in contrast with the order and regularity of the building in historicist style behind it. An operation that brought new life to a hidden, unused part of the site and created a new landmark, just as the architects have done in Smíchov. 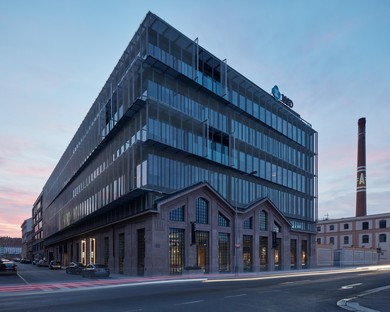 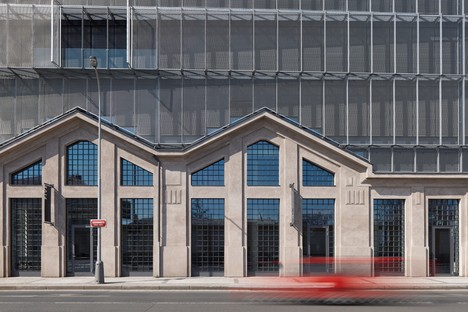 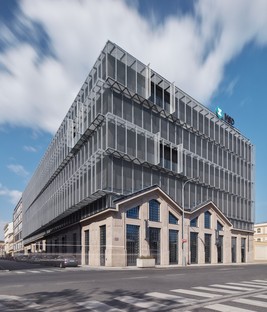 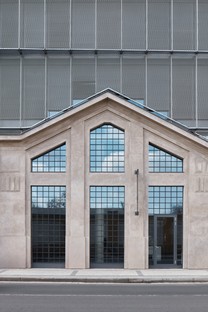 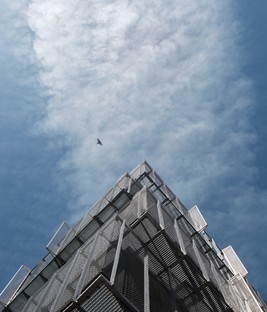 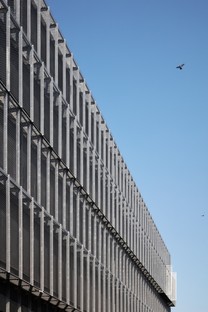 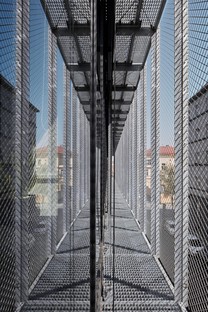 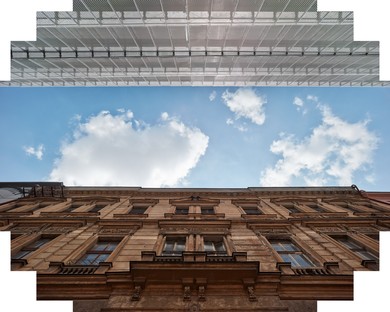 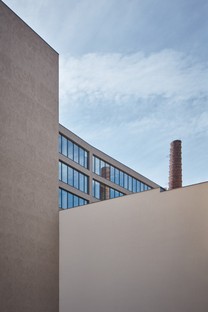 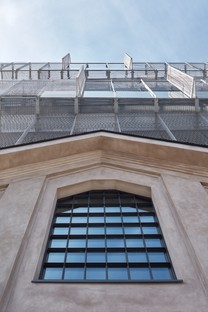 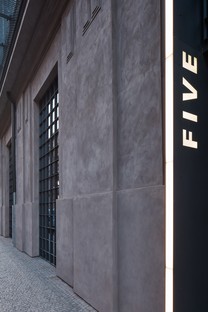 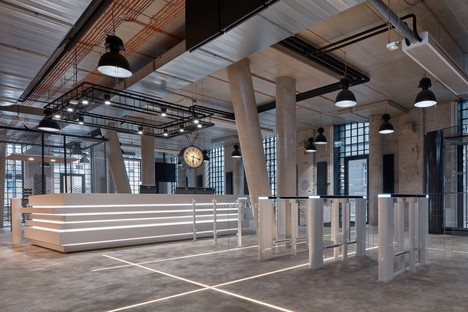 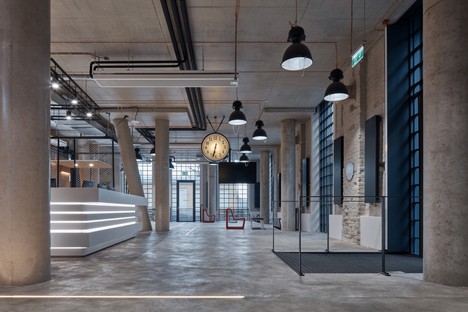 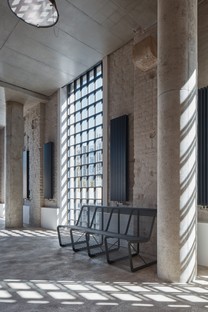 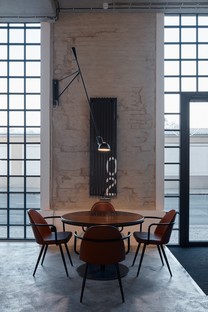 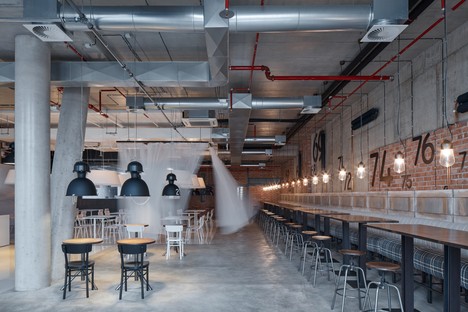 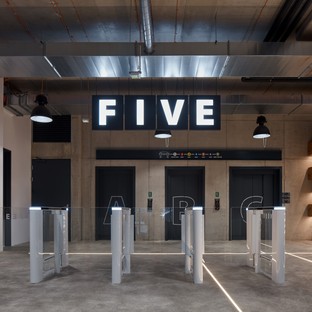 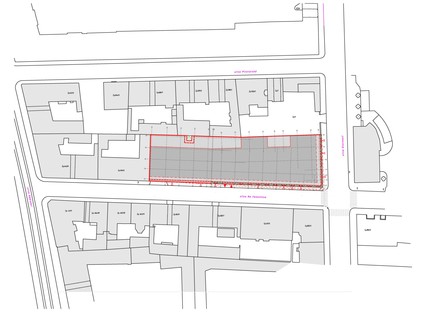 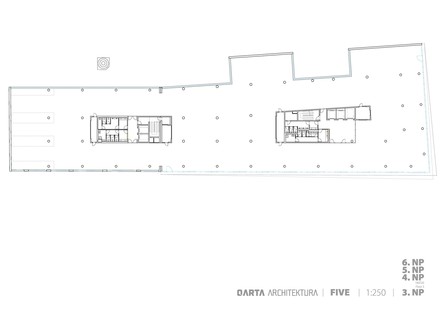 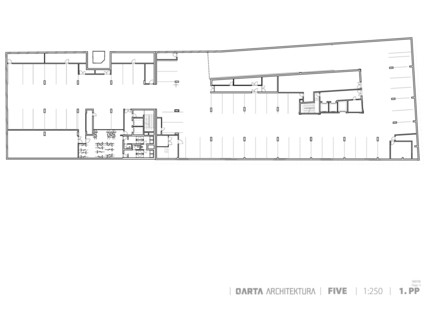 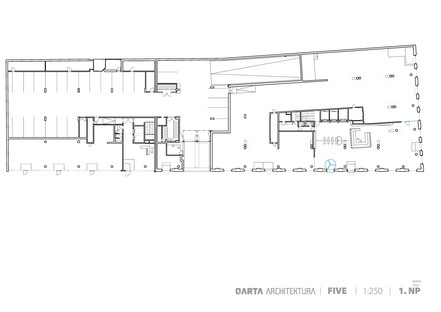 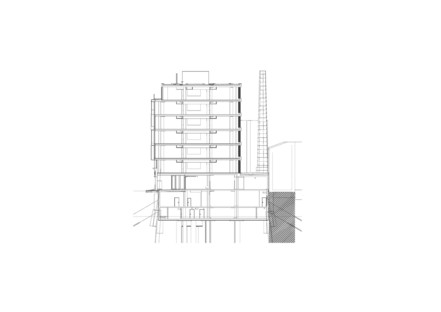 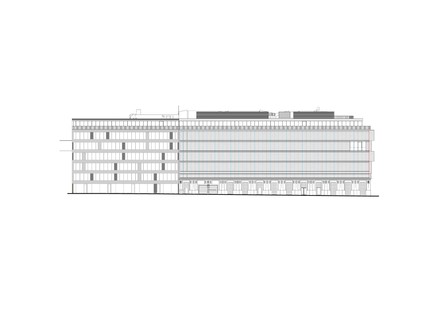 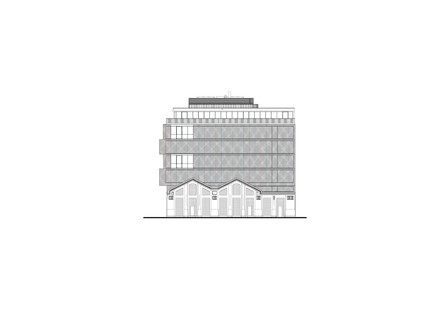