Gran Cafè Torino was completed recently in an important historical building constructed in the 1920s near Palermo’s central railway station. PuccioCollodoro Architetti interprets the Liberty style characteristic of the neighbourhood with contemporary materials and forms in the interior design of the coffee shop. The concept developed by the architects was intended to give this historic Palermo neighbourhood an elegant “city lounge”. 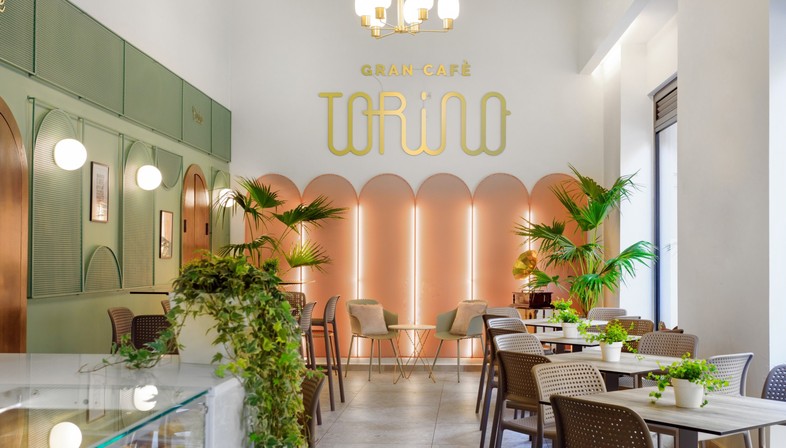 The idea of giving Palermo an elegant “city lounge” in a historic central neighbourhood inspires the interior design of the "Gran Cafè Torino" completed recently by PuccioCollodoro Architetti, founded by architects Gianluca Puccio and Andrea Collodoro. Evocative, emblematic, refined and vertical: these are the four adjectives the architects use to describe their project, which uses contemporary materials and forms to interpret the neighbourhood’s characteristic Art Nouveau style.
The "Gran Cafè Torino" is located in a 190 sqm commercial space at street level in an important historic building constructed in the 1920s. The building is located near the central railway station, at the corner of Via Torino, which gives the café its name, and Via Roma, an important traffic artery added when the city’s urban layout was modernised following the unification of Italy. Buildings with monumental façades were constructed in place of the old buildings torn down to make way for the new road.
Analysis of the place and its history represented an important starting point for planning the project. The research revealed the importance of the building, and indeed the entire neighbourhood, in Palermo’s early twentieth-century cultural salons. This precious information backed up the client’s request to give the city a gathering-place evoking romantic turn-of-the-century style and inspired the architects’ design concept. 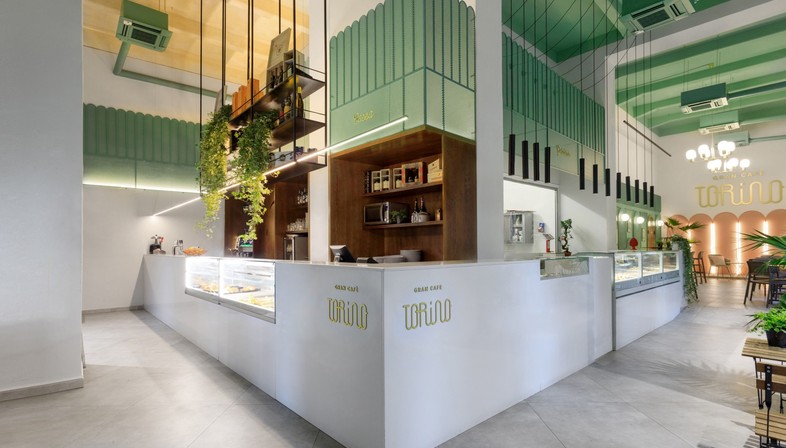 The interior design project regards a 190 sqm commercial space at street level composed of four main rooms plus utility and food preparation areas. The architects of PuccioCollodoro Architetti first recovered the original state of the site and revealed its unusual features as one of the first buildings with load-bearing bricks and a ribbed concrete floor. Subsequent additions to the original structure were then eliminated, such as technical false ceilings, restoring the imposing height of the spaces and reclaiming the original ceiling decorations in the entrance area at the corner of the two streets.
The corner is a strategic entrance point to the coffee shop, from which the entire space is visible. The architects’ choice of styles and colours are reflected in the original ceiling decorations in this area, all helping create the feeling of being in a Gran Café of the Belle Époque without going overboard with sentimental evocation of days gone by, adding a contemporary twist instead. This result is achieved thanks to all the architects’ choices, in which micro-perforated sheet metal elements in pastel hues play a key role, emphasising the imposing verticality of the spaces. These colourful elements act as a fil rouge uniting the entire project, joining all the spaces up to the back wall, emblazoned with the café’s logo, with its composition picking up on the gentle curves present throughout the project. 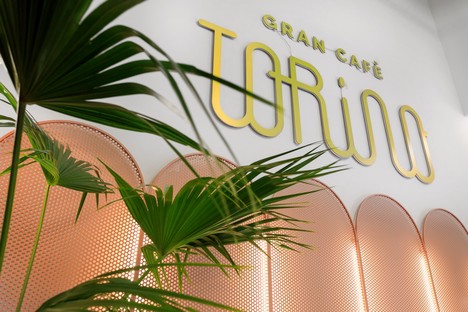 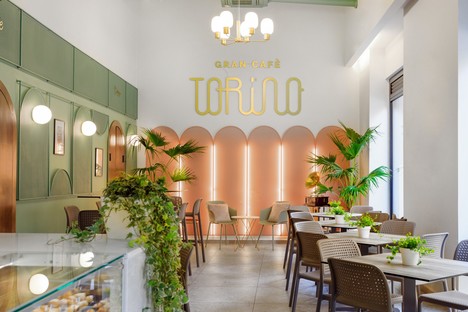 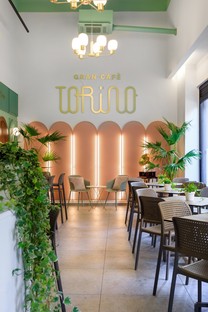 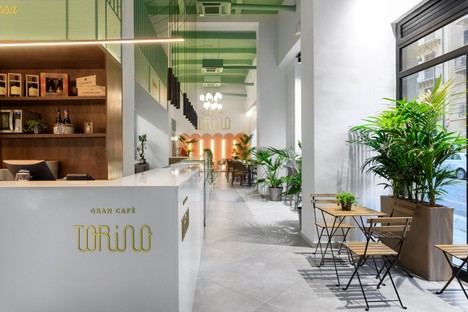 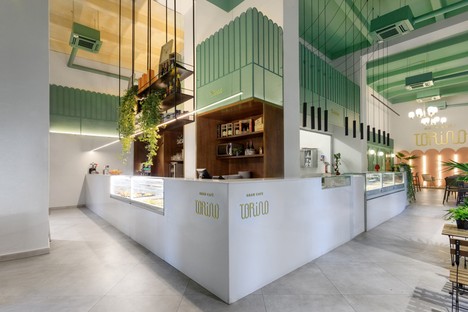 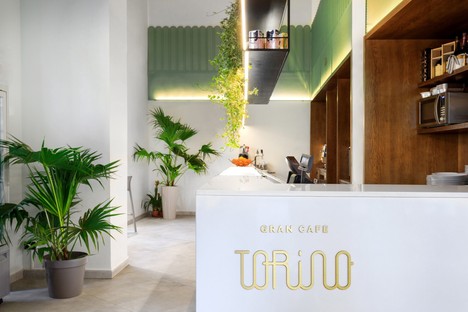 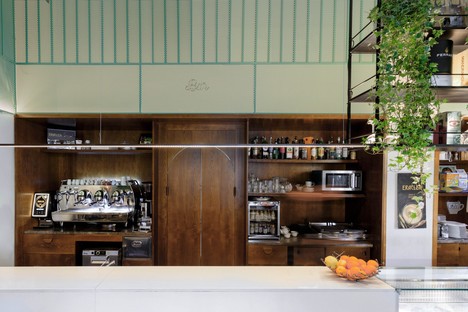 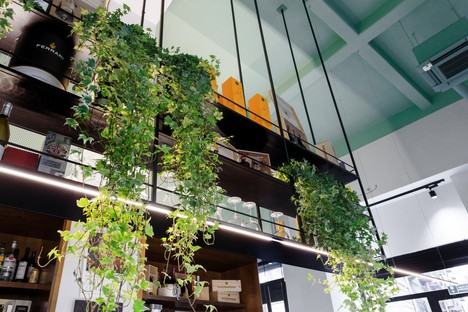 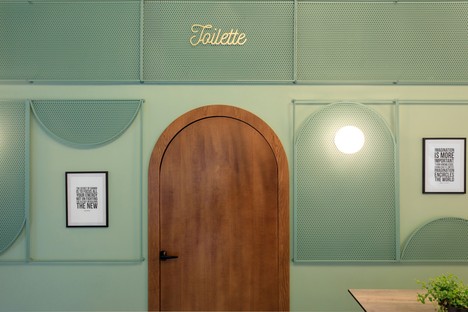 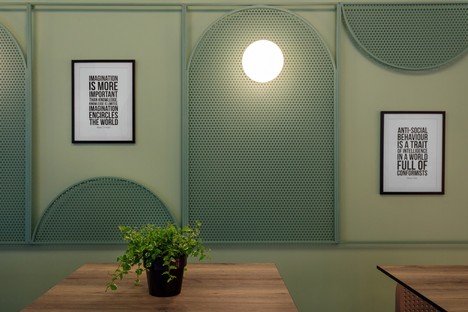 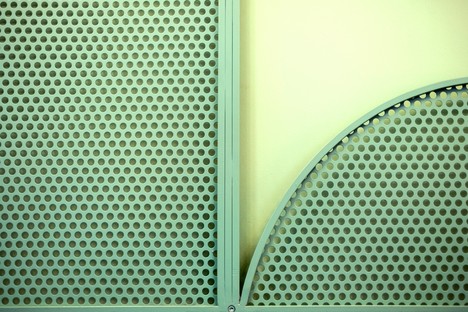 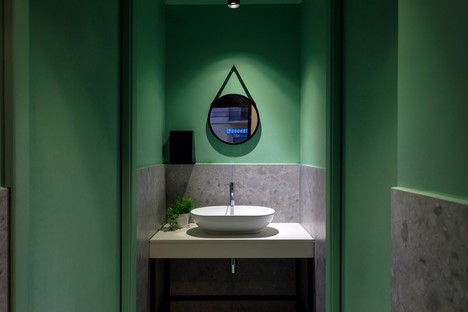 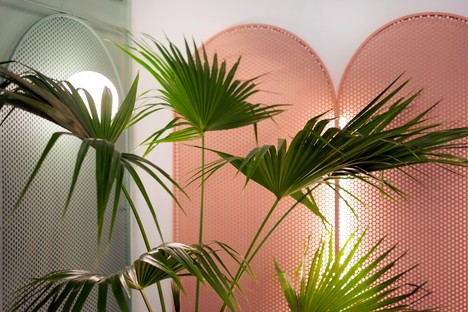 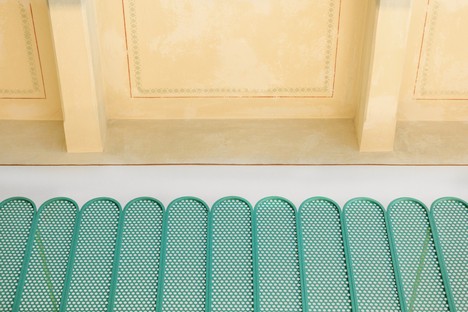 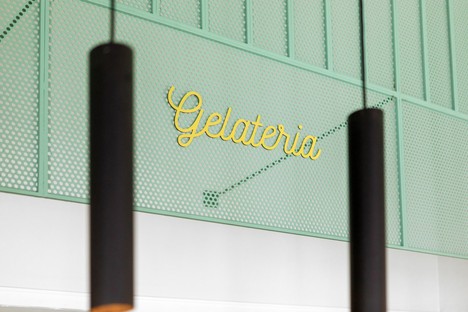 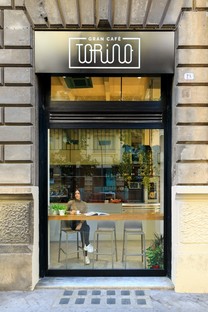 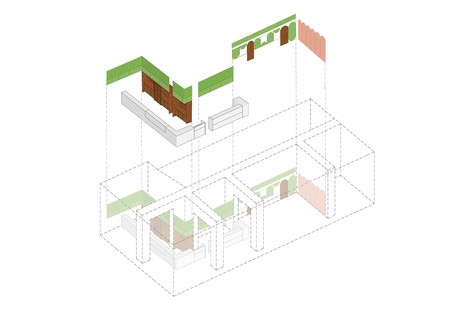 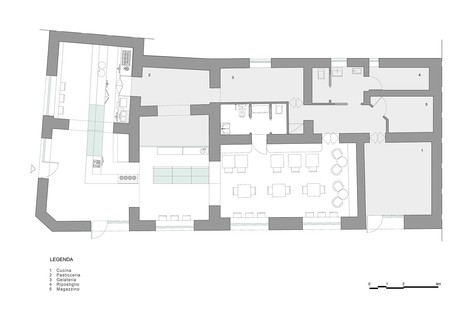 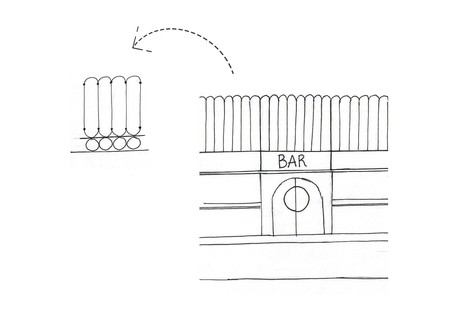 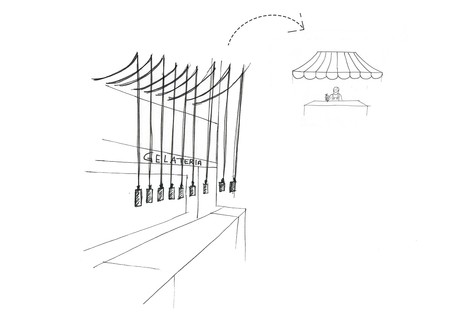