With the aim of expanding the elementary school in Vřesovice u Prostějova, Czech Republic, Public Atelier and FUUZE architects practices have restored a Baroque-era rectory, one of the major landmarks in the village. The vibrant architectural design accentuates the corridors and central courtyard. 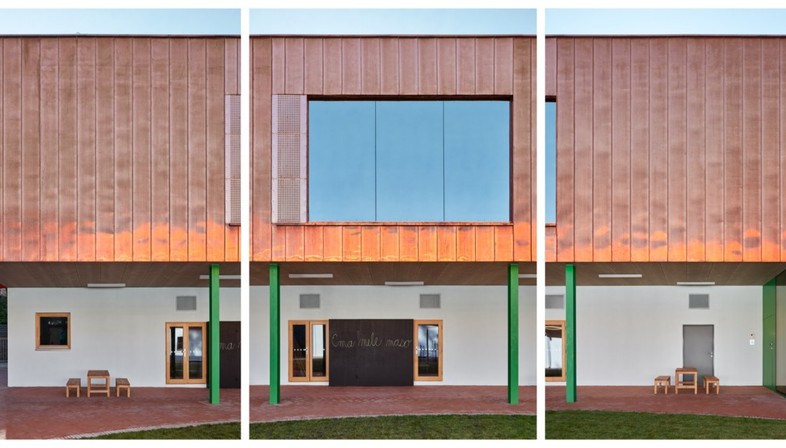 The young architects practices Public Atelier and FUUZE jointly designed the extension of an existing elementary and nursery school in an old Baroque-era rectory in Vřesovice u Prostějova, a small municipality in the Czech Republic. The project focuses on connecting the Baroque architecture and new buildings, with the aim of optimizing the courtyard.
According to historic sources, the church building was constructed in 1689 and extended in 1704 to its current size with a portico facing the courtyard and agricultural outbuildings. The property was redeveloped generally in the mid-1990s in order to use the building for educational purposes.
Still in church ownership at that time, this first change of use paved the way for the future secular use of the historical building, which changed ownership in 2013. Following an agreement between the Curia and Municipality of Vřesovice u Prostějova, the vacant building, which covers 950 square meters, became public property. As the sole condition for ceding ownership of the building, the Curia asked that building be used and the Municipality be responsible for its upkeep and maintenance. It should be added that the complex is linked to the oldest landmark in Vřesovice, the Church of St. Peter and St. Paul. Located at the entrance to the main street of the built-up area in the south-east part of the village, it has been considered the geographic center of the community for centuries. The Municipality's decision to restore and bring it back to life was therefore tremendously important, and fully understood by the young Jiří Markevič (Public Atelier) and Jaroslav Sedlák (FUUZE). Their project maintains and emphasizes the preeminent position of the building in the surroundings, offering better usage alongside a bold aesthetic.
The Municipality’s decision to put the new elementary school there perfectly counterbalances the eighteen-century building housing the nursery school at the opposite entrance to Vřesovice. Markevič and Sedlák’s project to extend and refurbish the Baroque rectory for education purposes preserves the building’s historical features, while adding areas which optimize new ways of working and school life, reinstating the inner courtyard to its central role.
To do so, interconnecting corridors between the various buildings that make up the rectangular courtyard were built first. Pertaining to different eras and with different uses, the rectory structure and less grand agricultural and services annexes had never been directly connected. The creation of covered corridors and interconnected rooms has refocused attention on the courtyard, which has been landscaped, in order to make all class activities community-centric.
The architects’ work also focused on the roof structure where the Baroque main building’s roof trusses were in poor condition and required restoration. The upper floor and roofs of annexes surrounding the courtyard were also completely rebuilt. Historic features have been retained on the exterior, with a simple palette of whites for the rendered walls, plain red tiles on the sloping roofs and copper gutters and downpipes. In line with the request to expand the school’s capacity, the designers located all classrooms on the first floor of the buildings, overlooking the courtyard. A new layout was designed based on linking the main imposing building with annexes on the other three sides of the courtyard, leaving lower floors to be used for storage and services. Taking advantage of the complex’s location at the foot of a slight slope, classrooms to the south overlook a new wooden terrace and lawn, from where lessons can be held with views of the Church of St. Peter and St. Paul which stands on the summit of the hill.
Interconnecting corridors between the reconstructed sections and historic building have been treated as an opportunity to insert modern sections, shaped by color, material and academic decisions.
From the outside, the new construction is evident in the white stairway and new yellow geometric block on the west side, in stark contrast to the restored historic render and sloping roofs. The original appearance of the landmark building has been preserved in relation to its village surroundings, while the courtyard and inner facades are strikingly distinctive. The southern entrance is under a new portico where narrow, green-painted pillars support new first floor schoolrooms with a copper facade, and an additional corridor with red walls. On the opposite side of the courtyard, the new connecting building comprises striking, brightly colored blocks, which differentiate the newly built section from the older building.
Contrasting colors and materials are used to enable us to distinguish the layout of the interior spaces, even from the courtyard. Accordingly, graphics and colors inside the rooms are clearly consistent with the exterior.
Although the building has the status of a national cultural landmark, for the restoration it was decided to highlight the new blocks, preserving the historic identity of the complex yet altering the internal layout and courtyard to reflect the new approach. The use of large glass windows and walls combined with bold colors, in stark contrast to the historic style, has separated the two parts on different floors, and avoided reconstructing the complex in its original style.
The “unabashed” combination of historic and contemporary, however, go beyond aesthetic choices. They communicate the direct relationship between rooms and users, and convey the concept of appropriation of the historic building. The design therefore ensures that children and teachers make free use of every wing in the complex with the same attitude and freedom, precluding the historic building from inhibiting their behavior. 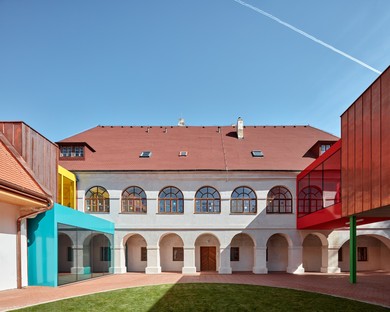 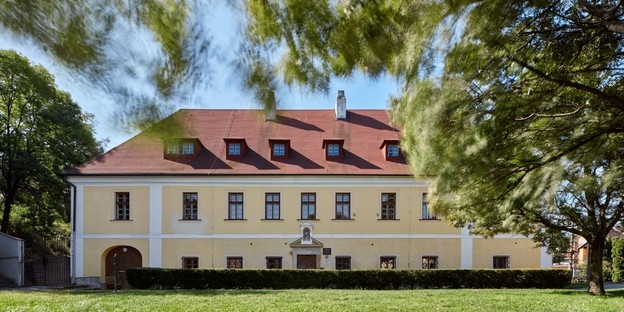 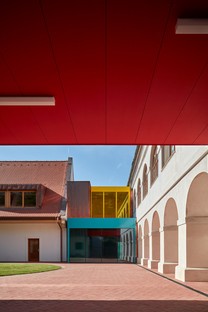 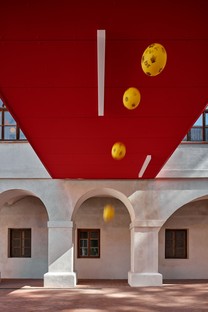 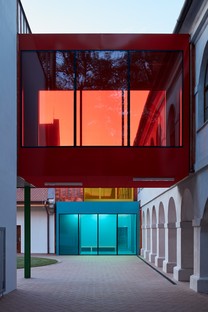 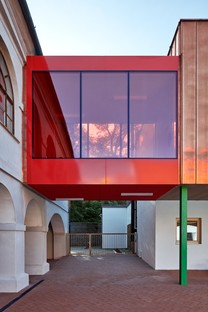 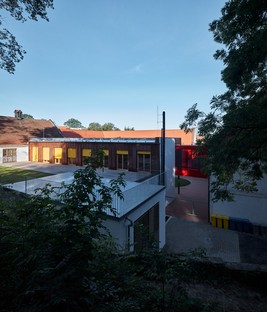 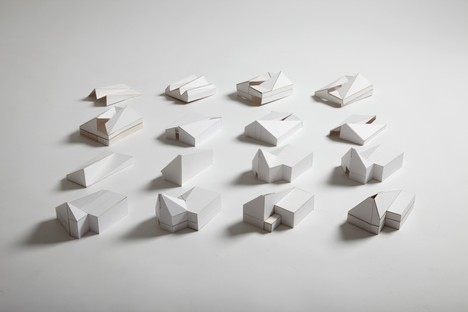 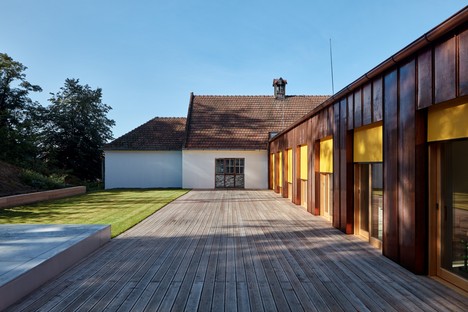 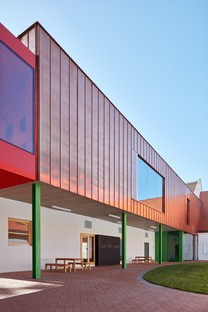 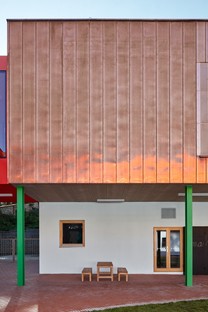 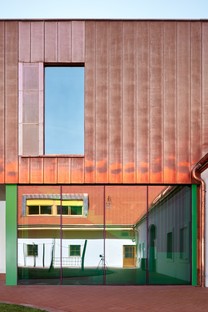 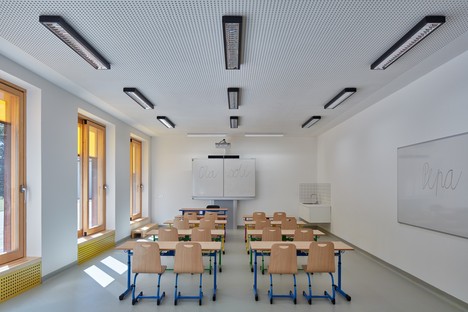 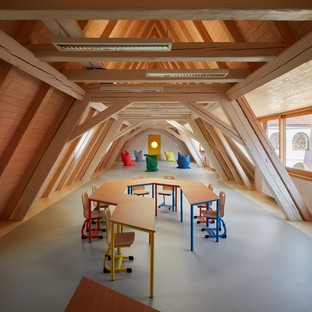 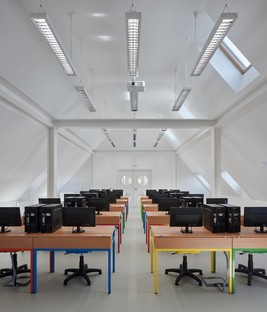 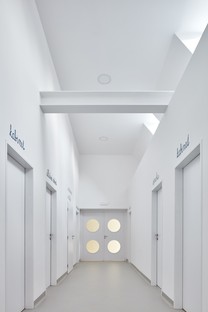 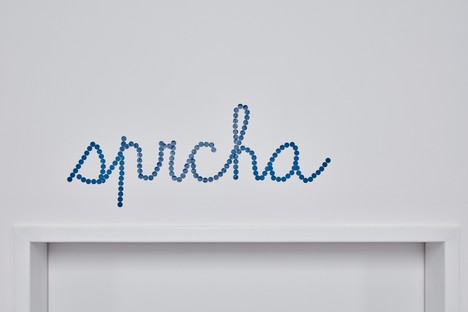 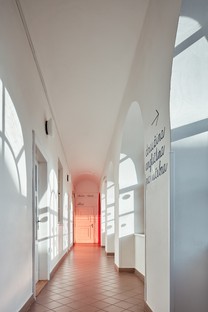 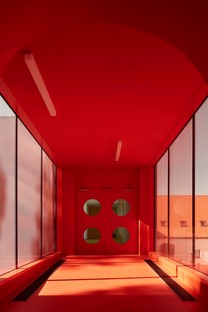 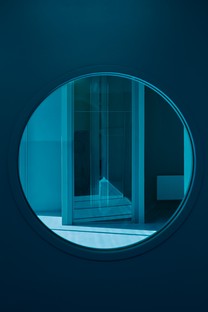 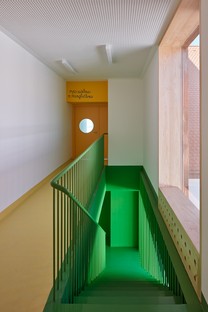 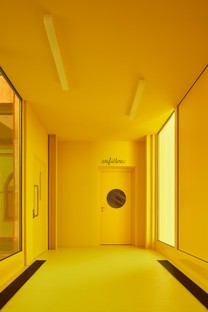 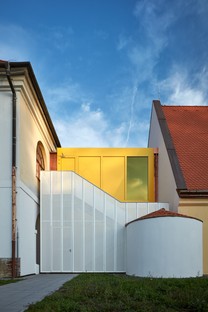 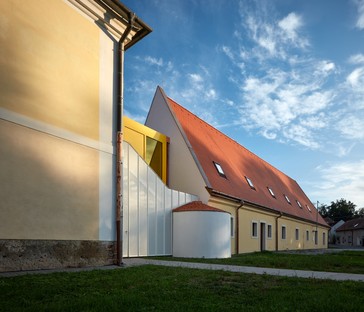 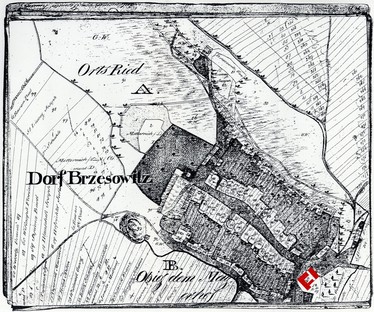 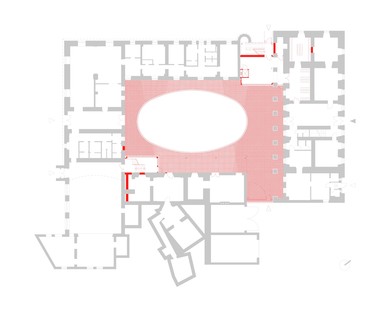 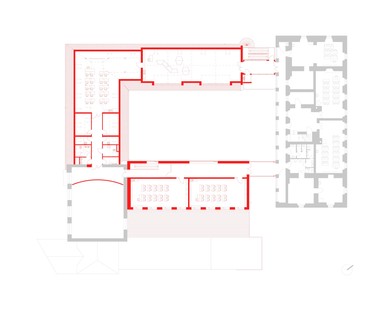