The new Pratgraussals Events Hall is part of the redevelopment project of the right bank of the river Tarn, in the French town of Albi. Ppa Architectures and Encore Heureux, winners of the 2016 call for tenders, designed an events hall based on the principles of modularity and flexibility. The project for the new Pratgraussals Events Hall in Albi, in the south of France, is based on another important public building, the Cathedral Basilica of Saint Cecilia with its bell tower, the most well-known monument in the French town. Visible from all access points to the city, as well as from thearea of Pratgraussals, north of the historic town centre, the spire had to retain its importance also in relation to the new Salle des fêtes. According to ppa architectures and Encore Heureux architects, the Pratgraussals Events Hall should have looked new and historic at the same time and its structure should have attracted the interest and attention of people for its radical look, while also becoming part of the green urban area, much loved by the residents of Albi.
This is why, for this project, a structure with an 8-layer roof was designed, which clearly differs from the traditional buildings seen in the French countryside, but with wood as the main material to create an instant feeling of homeliness, making this building part of the surrounding agricultural architecture. The horizontal design would have also made it possible to avoid contrasting with the vertical design of the bell tower, so as not to disrupt the hierarchy in architecture, which has prevailedin the town for centuries.
The call for tenders issued by the Ville di Albi highlighted the absence of a specific intended use for the auditorium, which should have been designed according to the highest construction standards, to reduce costs and construction times (only 11 months), but also with great versatility of use. The most famous event that has been held there since last autumn, when the building was first opened, is the Pause Guitar, the music festival that made the city famous and for which, in addition to the large covered auditorium, the adjacent green spaces were also rearranged.
The reconstruction of this new facility, located in the heart of a natural area covering 15 hectares on the right bank of the river Tarn, is part of a broader project to revalue the site of Pratgraussals, in the medium and long term. The town council is also planning to build a cycle/pedestrian walkway along the existing railway bridge. Pratgraussals will bephysically and culturally connected to the historic town centre, expanding the so-called centre.
Built in 1964, the old pavilion in Pratgraussals was adapted to accommodate events in the 1990s, which led to structural problems and to the use of inadequate and outdated equipment over the years. According to the project, it was supposed to be demolished.
Ppa architectures and Encore Heureux architects designed a wooden frame structure, capable of hosting an auditorium with a 24-metre span. In order to encourage the use of mass-produced components, pre-assembled in the workshop and positioned on site, the façades were covered with wooden modules (from the Limousin region), the base was made of prefabricated concrete blocks with pebbles from the river Tarn and the roof was made of zinc panels. The custom-made metal tube and wood panel furnishings were also designed with the same approach, and can be used both as signalling systems and as additional reception and bar counters.
The main south entrance to the natural area of Pratgraussals and the north entrance with a patio, reserved for staff and artists, overlooking the river Tarn, were respectively located at the two ends of the large hall seating 500 people. On three of the four sides there is a portico for pedestrians, offering a simple shelter from the sun and rain. On the north-west side, instead, the walkway goes inside, exclusively for staff members going to the auditorium and its technical rooms (changing rooms, warehouses, kitchens, offices and service rooms). With a simple standard plan, it has all the essential elements to offer a flexible programme that includes congresses, seminars, concerts and other kinds of cultural events typical of public life in Albi.
Many different configurations are available in the hall: a fully open space for hosting exhibitions or big evening parties, it can be divided in half or in several parts by means of sliding tents on the walls, whereas the rooms to the north can be opened up, using mobile partitions, becoming a concert stage. Moreover, the patio, near the secondary entrance, is designed as a convivial environment for a smaller number of users or related to the main event.
Finally, the collaboration with the artist Bonnefrite is also worthy of mention: he was asked to create a fresco on the wall of the entrance to the events hall and the signage of the building. When speaking of the use of wood and of the unique shape of the building, he explained that he was inspired by a jungle theme, with references to Rousseau and Matisse. For the design, instead, he applied the style that made him famous, namely, his beautiful freehand writing on printed media. 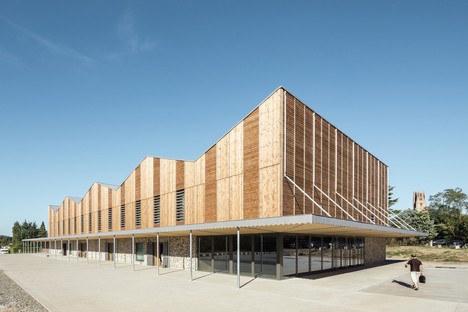 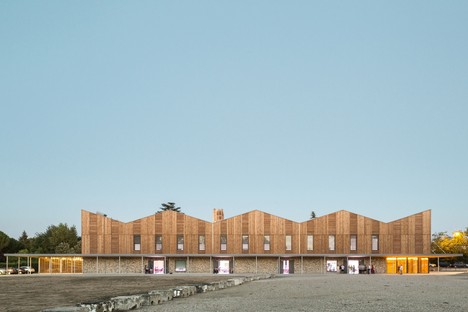 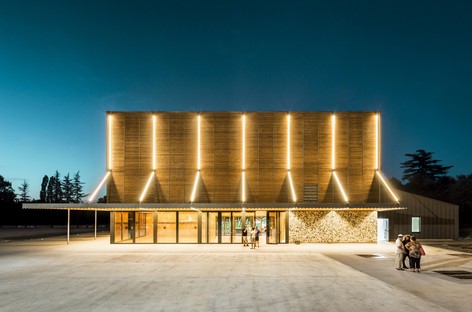 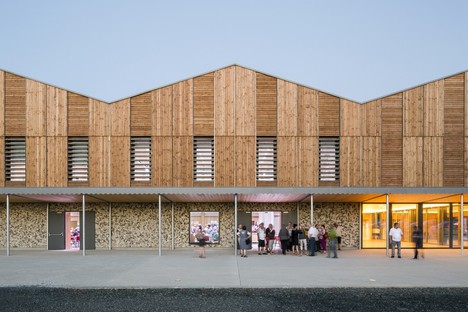 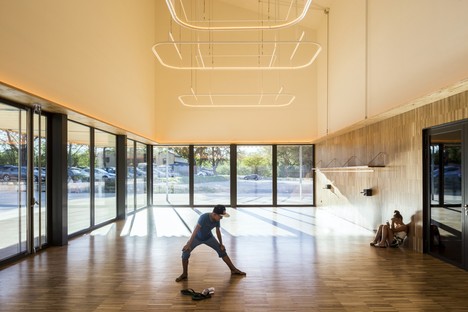 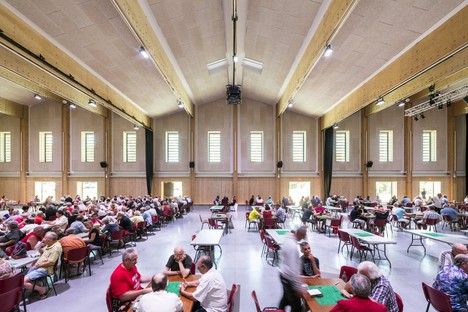 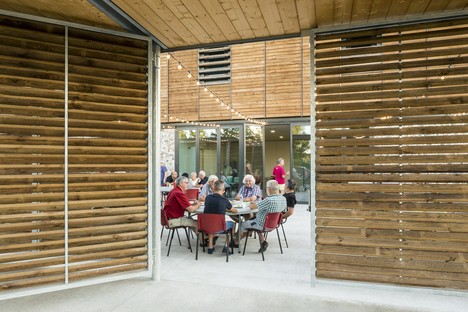 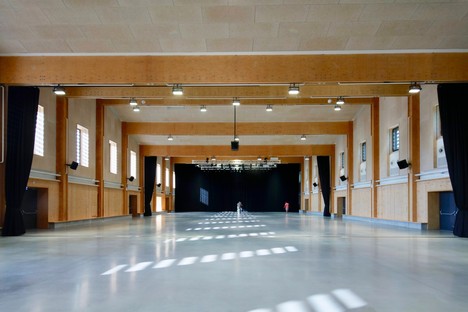 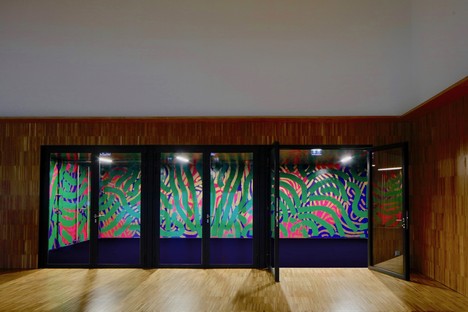 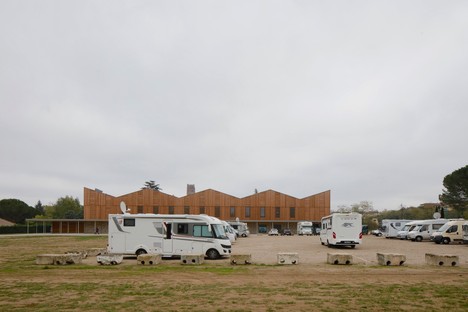 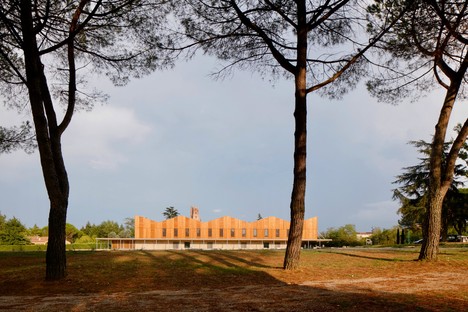 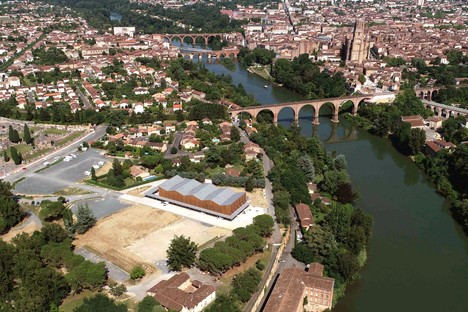 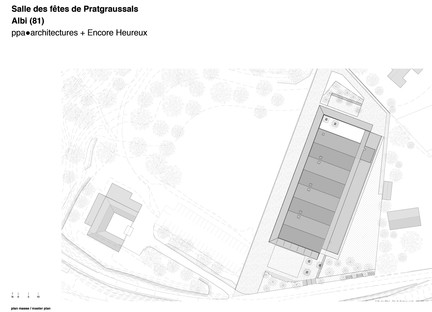 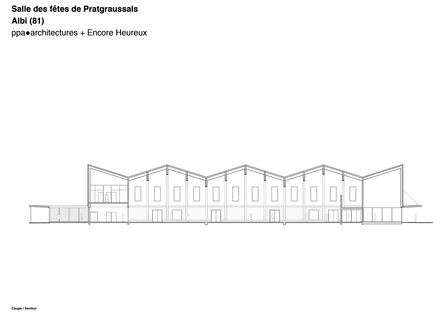 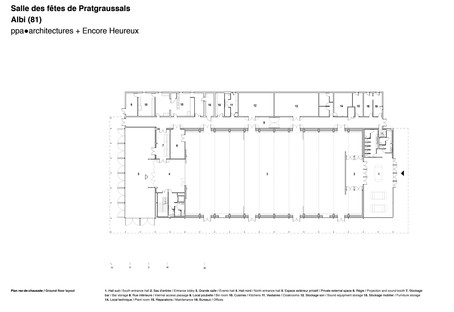 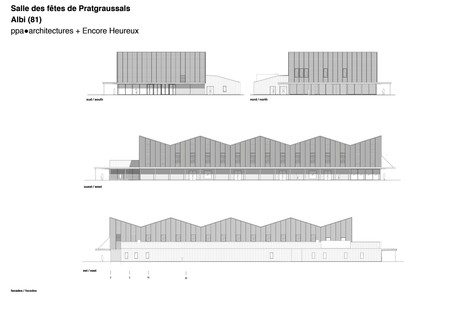 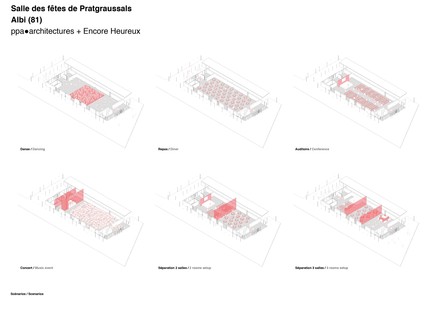