Parisotto + Formenton Architetti resigned Galleria Bolchini, located in Piazza Meda, Milan, in the building of the same name designed by Pier Giulio Magistretti between 1928 and 1930. The project focused on re-designing the lower part of the building with its public arcade. 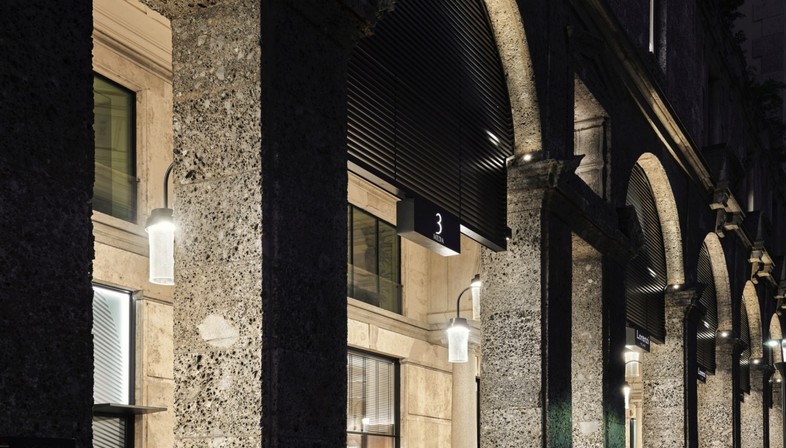 In Piazza Meda, in the thriving historic heart of Milan, a shopping district close to the cathedral, Parisotto + Formenton Architetti completed the re-design of Galleria Bolchini.
The architects focused primarily on the public arcade and the lower part of the façade of the building of the same name, bringing new light to this historic twentieth-century Milanese building that serves as the backdrop for the Grande Disco, a bronze sculpture made by Arnaldo Pomodoro in 1972.
Palazzo Bolchini is a big eight-storey building occupying the entire northern side of Piazza Meda, formerly known as Piazza Crispi. Features such as the building’s art deco accents inspired by elements such as obelisks and statues and the top-floor balustrade recall the Neoclassicism of nearby Piazza Belgioioso. The building was designed in 1927 by Pier Giulio Magistretti, father of the better-known architect Vico Magistretti, commissioned by lawyer Ferruccio Bolchini and his wife Ada dell'Acqua and built between 1928 and 1930. The original project had a troubled existence, as it began at a time of major changes when the city’s historic fabric was being emptied out to create the new piazza. Magistretti was, in fact, forced to make a number of changes to adapt the building to its changing surroundings. Another important year in the history of Palazzo Bolchini was 1973, when the building underwent major interior renovations planned by architectural practice BBPR, while from the 1980s on it became the property of the Generali Group, the client commissioning the recent redesign project.
Parisotto + Formenton aimed to uncover the building’s original architectural features, and worked in two main ways: safeguarding and preserving all the original materials, which required thorough overall cleaning and maintenance of all surfaces, such as the multicoloured mosaic flooring under the arcades, the stone façade and the plastered ceilings, as well as a number of decorative elements made of concrete, such as capitals and cornices. At the same time, the architects managed to clean the building’s façade, eliminating all the secondary elements that were not a part of the original project, such as the curtains and the window frames on the ground floor and main floor, which open directly under the arcade. The curtains were replaced by metal sunbreaks with a burnished finish installed in the existing arches of the arcades to screen the sunlight and provide privacy for the offices on the main floor and the arcade. The new frames designed specifically for the project are differentiated into three types: with fixed glass for shop windows, with fixed glass and a side door, or with fixed glass on either side and a door in the middle.
The project’s urban nature is clearly revealed not only by these elements and by the role the building plays in the piazza, with its public arcade, but by the technical lighting design by Metis Lighting contributing to the creation of an evocative atmosphere both by day and by night. 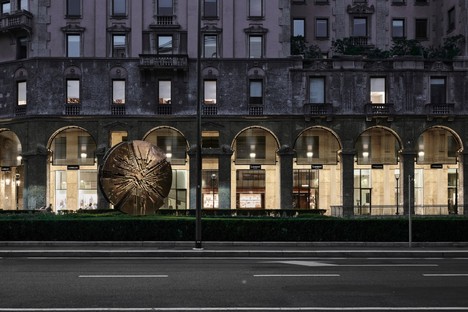 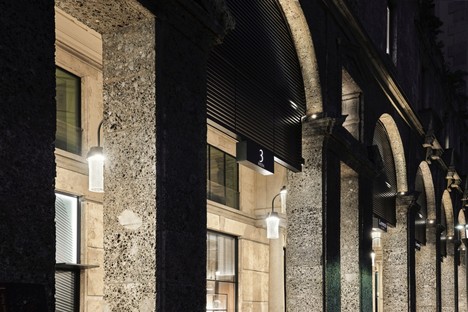 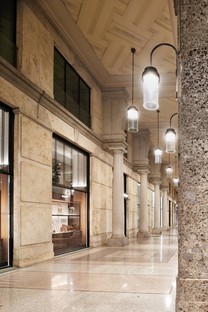 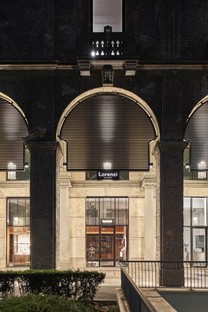 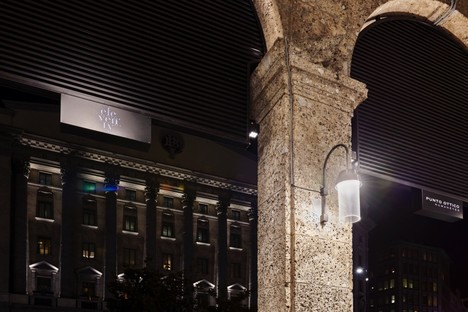 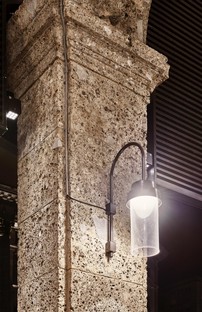 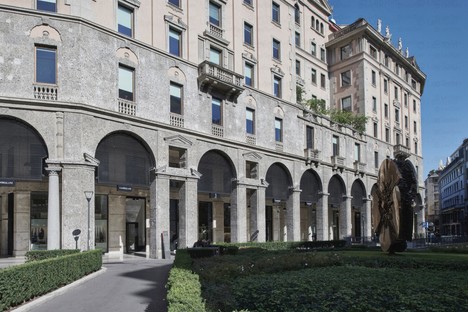 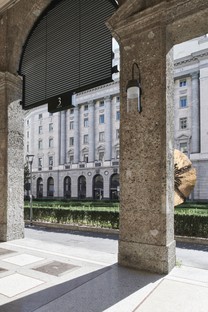 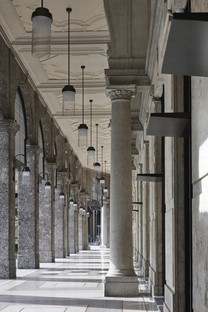