PCA-STREAM: Laborde, conversion of the barracks of the royal guard in Paris into office space 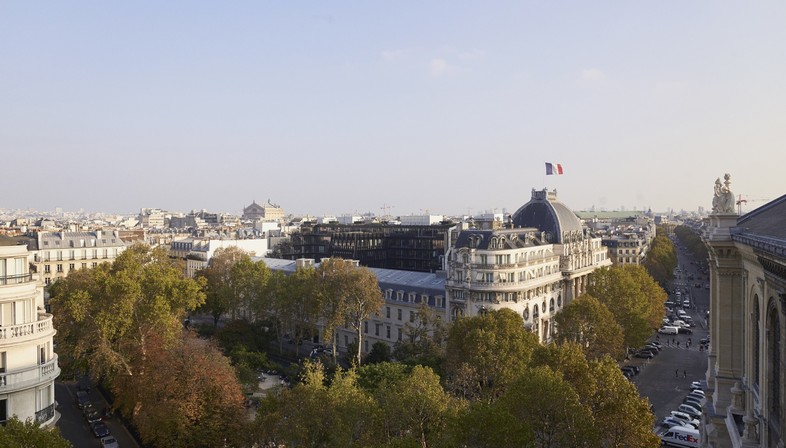 On the former site of the Pépinière barracks of the royal guard, between Place Saint-Augustin and Rue de Laborde in Paris, stands a complex of buildings of different ages, in which the latest restoration and expansion project was entrusted to Philippe Chiambaretta’s French studio PCA-STREAM. Famous for its many projects working on buildings in the city, such as the renovation of 173 Boulevard Haussmann or 52 Champs Elysées, still underway, Philippe Chiambaretta has been focusing on the theme of office organisation and its continually changing dynamics for 15 years. He does this through his research arm, STREAM, with the involvement of 150 researchers all over the world, who work on three-year protocols and apply their studies to the development of office solutions for such prominent clients as Facebook, BlaBlaCar, Chanel and Total.
In 2015 the French government sold the Pépinière barracks, former home to the French Guards, the elite regiment responsible for the protection of the King of France. Originally built with a U-shaped floor plan opening onto Place Saint-Augustin, the building was extensively remodelled during the Second Empire to accommodate up to 1500 men, then partially demolished and rebuilt in 1925 when the Cercle National des Armées (the National Officers Club) was constructed in art deco style, closing off what used to be the barracks’ monumental entrance on Place Saint-Augustin. The sale by the government, and Philippe Chiambaretta’s renovation project, involved the only existing portion of the original eighteenth-century building (the wing on Rue de Laborde), the inner courtyard once used for military parades and the most recent block, built in 1950, containing barracks and offices. This very narrow, high-rise building with an art deco façade on Rue de Pépinière was a purely functional building of little architectural interest, and it was demolished in the renovation project, which focused on restoration of the eighteenth-century part of the building, constructed in a style which was very Parisian, classical, even military in its precision and austerity, according to PCA-STREAM.
So while the historic wing has been restored to its classical elegance and the proud severity of its façade now welcomes the law office’s clients, the courtyard has been completely redesigned and rebuilt, divided in two to embrace a new glass and steel complex that replaces the one built in the fifties, containing the management offices and business premises of Gide Loyrette Nouel law offices. A direct connection is established between the historic building and the new building erected in place of the one demolished by a “transparent” pavilion in the middle of the courtyard, an ideal continuation of the office building, resting on the ground on the eighteenth-century block.
The project restores the historic block to its original splendour, and picks up on the martial rhythm of its vertical façades in the design of the new walls on the courtyard, in which the severity of black steel continuous facades dissolves into the transparency of floor-to-ceiling glass. Having to connect with the façade on Rue de Pépinière, which is taller than the eighteenth-century barracks (nine floors plus the roof, whereas the older building has only five floors), the new building towers above the historic one, but the T-shaped steel beams and the external walkways on each level permit a horizontal reading.
Inside, the circulation systems are designed to permit a free flow all along the building’s length. There are many common areas and spaces designed for informal meetings: kitchens and convivial spaces on every floor; a contemporary restaurant with big tables that can be used as an informal place for work and collaboration during the day; and a vast library with armchairs where groups and individuals can come together. The lift cores are grouped together in one place to ensure that staff members meet every day.
By day, the power of the order and lightness of the new office building’s image relate to the more compact eighteenth-century volume, while at night its presence disappears in the light of the interiors, making the most of its historic counterpart.
The No-Pa, as the designers call the central pavilion, is a truncated pyramid shape that serves precisely to connect, that is, to encourage people to meet and talk. Characterised by a corridor of double height through which people can pass from the old building to the modern volume, it has meeting areas, a restaurant, a coffee shop, comfortable informal meeting rooms, and areas for reading, thinking and talking.
Finally, Gide Loyrette Nouel’s new offices have almost 4500 sqm of outdoor space, more than half of which is planted with gardens, such as the rooftop patios, a working café with a garden, outdoor walkways, and a garden in one of the two courtyards. 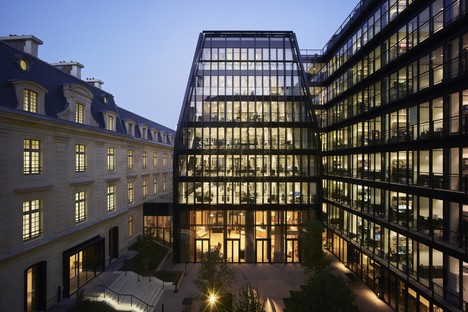 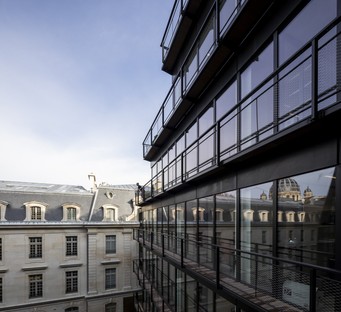 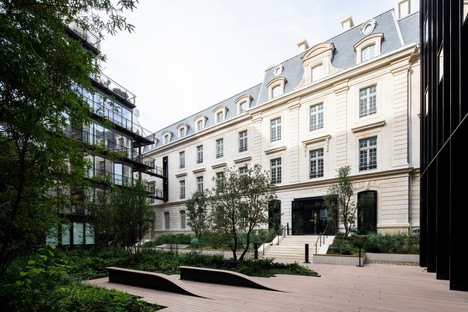 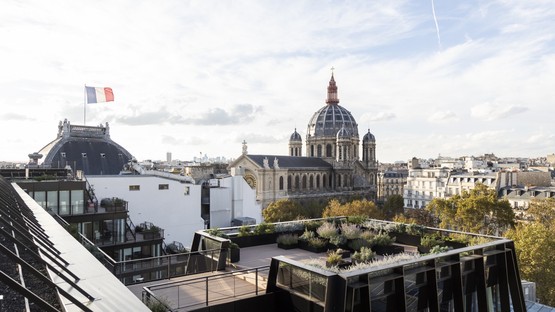 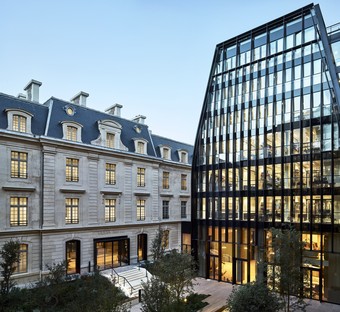 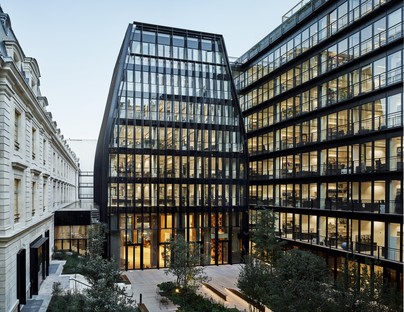 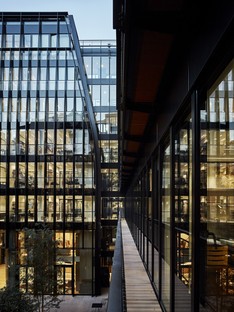 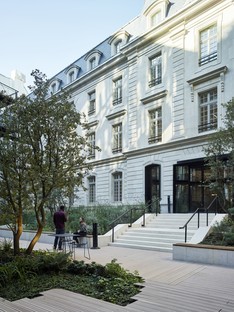 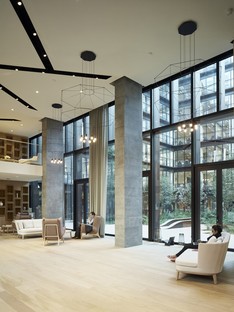 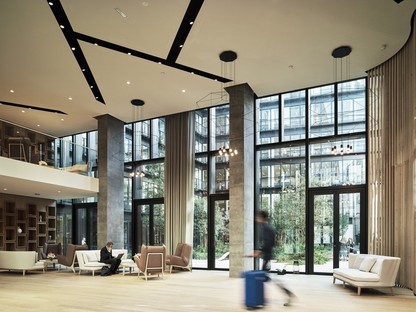 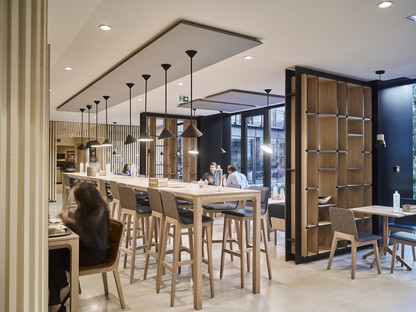 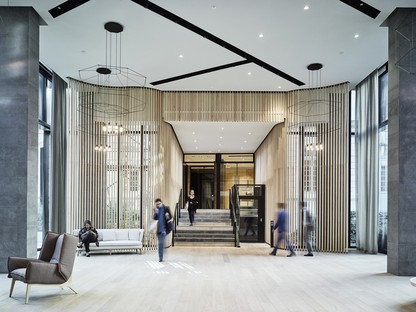 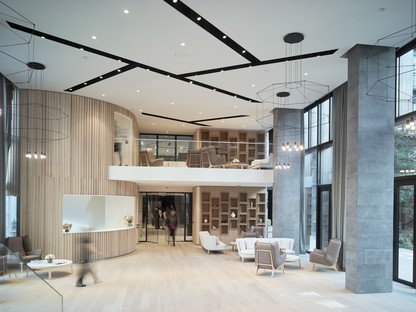 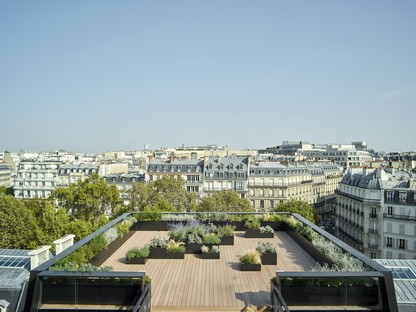 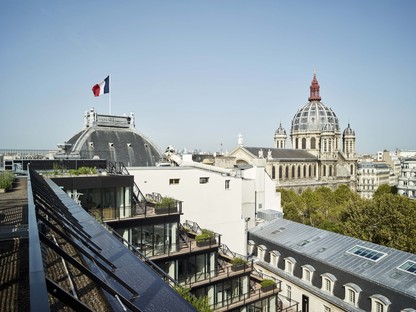 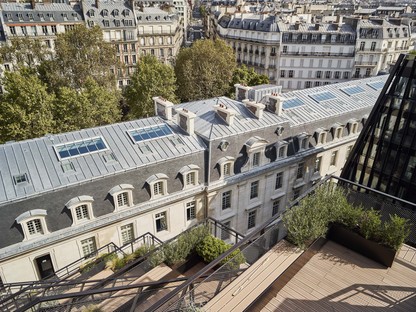 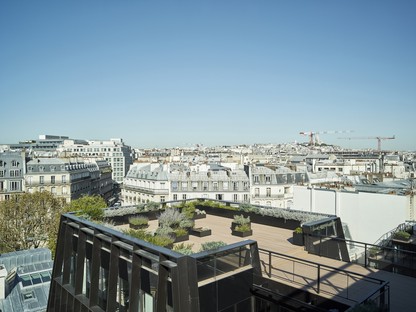 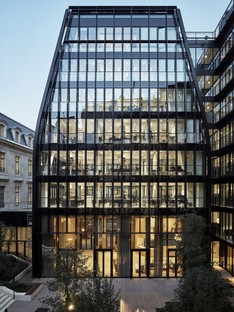 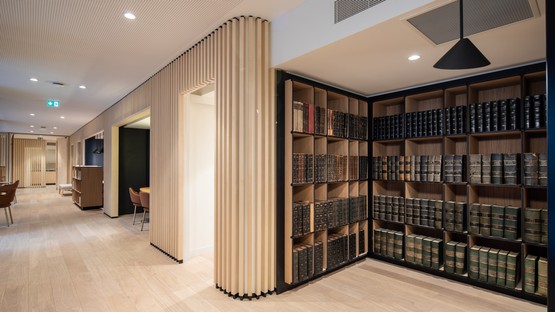 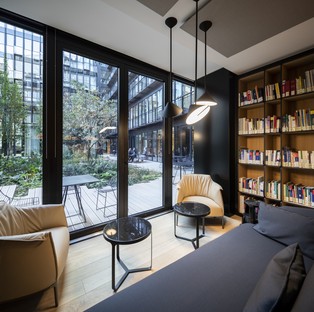 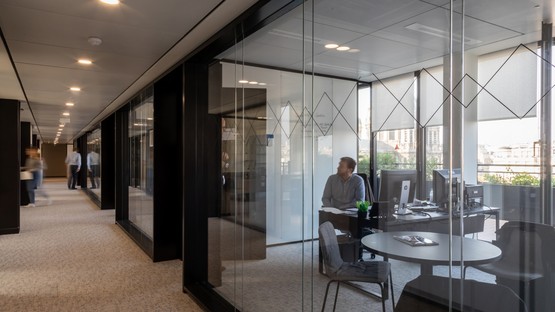 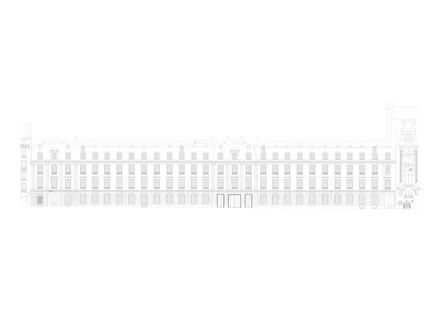 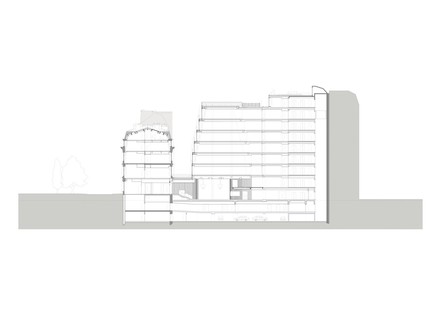 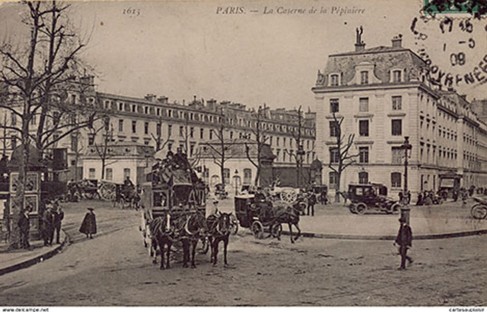 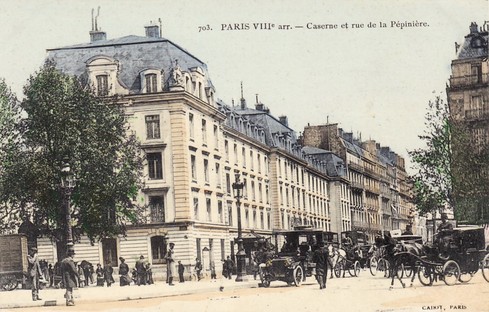