Dominique Perrault has transformed the Poste du Louvre, in the so-called golden triangle of des Halles, in the heart of Paris, into a new urban pole. Open to the neighbourhood and the city, Poste du Louvre is now a multi-level shopping arcade which preserves its industrial style. 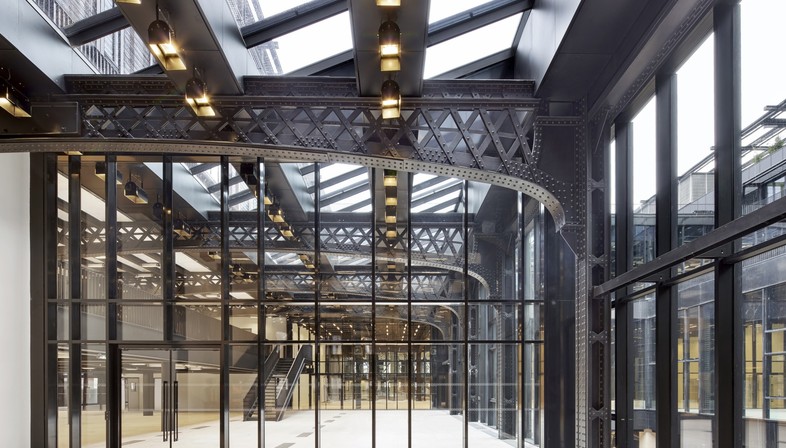 After almost ten years of study and construction, the Poste du Louvre has reopened its doors following a project by a team of architects led by Dominique Perrault introducing major architectural changes which restore its nineteenth-century structures and transform the building in response to today’s functional requirements.
Profoundly inspired by the philosophy of Paris mayor Anne Hidalgo, Perrault’s project restores the nineteenth-century steel industrial structures, dating back to the days of the Eiffel Tower, and opens them to the city, transforming the covered central courtyard into an urban plaza and opening up five access routes connecting it with the neighbourhood.
The Poste Group and its real estate branch, Poste Immo, owners of the site, see the modernisation of the building as the first step in a process of transformation primarily intended for the area’s residents and new residents who will be living in the social housing units created as part of the programme, intended to create a new pole of attraction in one of the French capital’s liveliest and most popular neighbourhoods.
In harmony with the major projects included in what is referred to as the golden triangle of des Halles, in the Louvre-Rivoli district, including transformation of the Les Halles shopping and recreational complex, the Samaritaine departments stores and the Pinault Foundation, Perrault’s project transforms la Poste du Louvre from a post office building to the heart of social life in the area.
The consultation process for management of the project began in 2012. Five of the 70 French and international teams that presented their candidacies were selected for the final phase, and Dominique Perrault’s team emerged as the winner. Overall redevelopment work began in 2016 and was completed this year, and the various commercial, residential and office spaces will soon be made available.
Going back to the historic roots of the Poste du Louvre, the building occupying the entire block between Rue du Louvre, Rue Étienne-Marcel and Rue Jean-Jacques Rousseau was designed between 1878 and 1888 by architect Julien Guadet for the national postal service. The complex fit perfectly into the curtain of buildings on Haussmann’s traffic arteries in the first arrondissement of Paris, with their worked stone façades in classicist style concealing an industrial soul with interiors forming bays supported by powerful buttresses and metal frames spanning long distances, in the style of the Eiffel Tower, seemingly built to allow great flexibility.
In partnership with Jean-François Lagneau, head architect of the Monuments Historiques in Paris, Perrault has restored the monumental façades to their former splendour and transformed spaces for distributing the city’s post into indoor shopping galleries like those of the nearby Galerie Vivienne or Véro-Dodat. 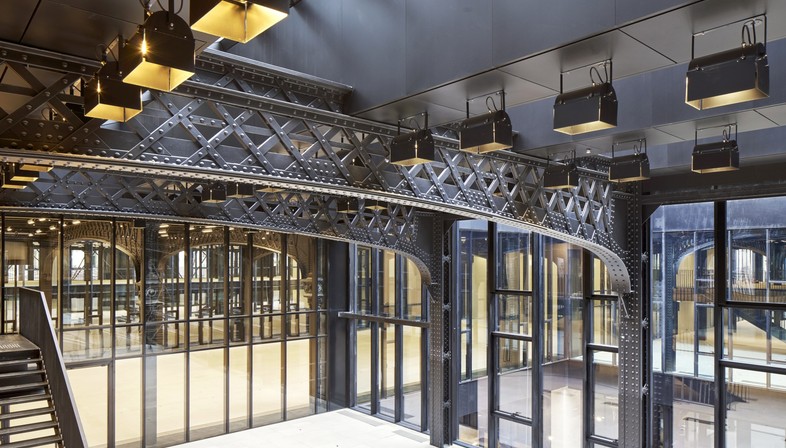 Perrault’s project is of course not the first structural work to be performed on the building over the years: between the ’60s and the ’80s a number of modernisation projects were required to adapt the building to the evolution of postal services, and the original attic was replaced by a flat roof after the fire of February 1975. After these transformations of the interiors of the complex, Perrault transforms the building’s use and its relationship with the urban layout of the city, opening up to it to become permeable to pedestrian pathways and illuminating its interiors. Five passageways now converge toward the heart of the block, from Rue du Louvre, Jean-Jacques Rousseau, Etienne Marcel and Gutenberg lane. The big covered plaza is treated as a courtyard in industrial style, with shops and services opening up around it. In more detail, the scanning of the building’s levels places logistics functions in a new basement on two levels; the historic post office and shops on the ground floor, around the courtyard and overlooking the streets in the block; while in the upper part, three floors of offices occupy large, flexible spaces up to 6.80 metres high. Social housing units are distributed over all levels, with the addition of a luxury hotel with a panoramic terrace on the top floor.
After revealing and restoring all the original frames and metalwork, with reinforcements, capitals, arcades and vaults, the architects added new external frames and fixtures that curve inwards to bring more daylight into the spaces. A new structure entirely independent of the one designed by Julien Guadet is introduced into the volume to support new loads and comply with fire regulations.
The continuous façades wrapping all around the perimeter of the central courtyard, from the first to the second floor, permit both overall homogeneity and a reading of the horizontal programmatic stratification of the project. These large glass surfaces, in addition to the new skylights, bring plenty of daylight into the building for the various functions, while the addition of fabric sunshades on the outside adds comfort.
This comprehensive project also incorporates a sustainable approach, with a series of environmental certifications: NFHQE Rénovation Excellent level, LEED Core & Shell Gold level, BREEAM Very Good level, as well as Patrimonial Habitat and Environment labels for the apartments and Effinergie Rénovation for the project as a whole. For climate control, the project offers connection with the supply from the city’s public urban heating (CPCU) and air conditioning grids. On its green roof, a pergola integrating highly efficient photovoltaic modules fulfils a part of the building’s energy and hot water requirements. 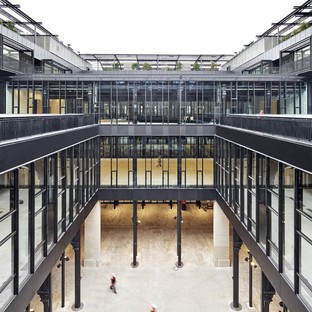 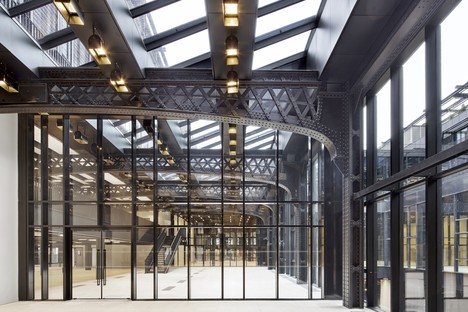 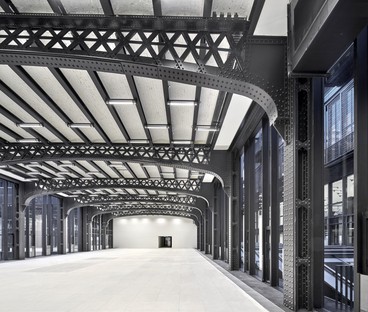 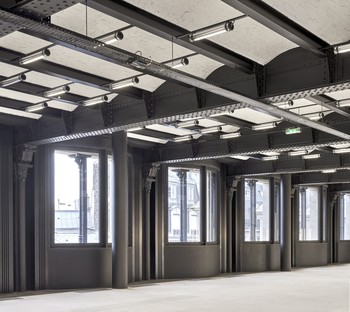 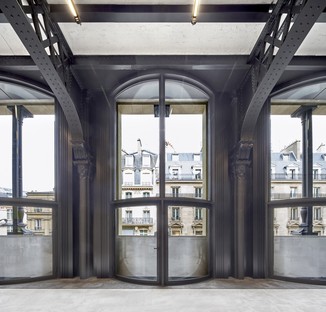 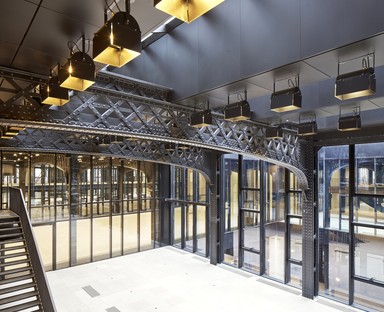 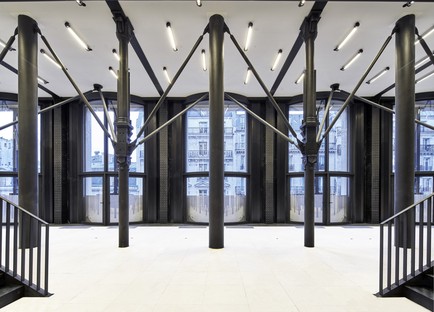 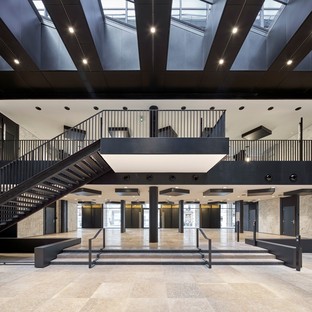 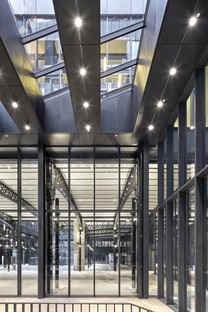 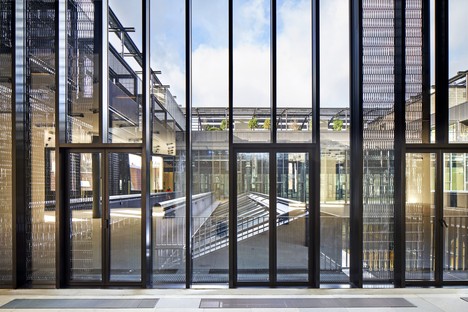 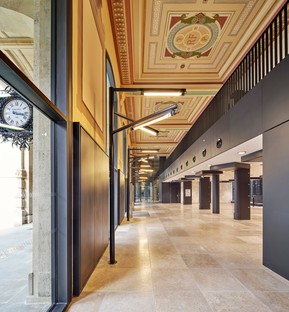 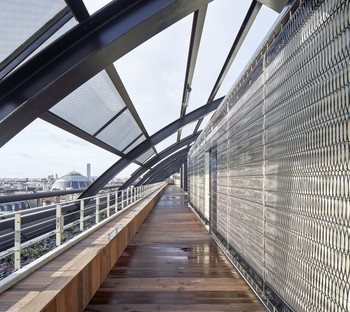 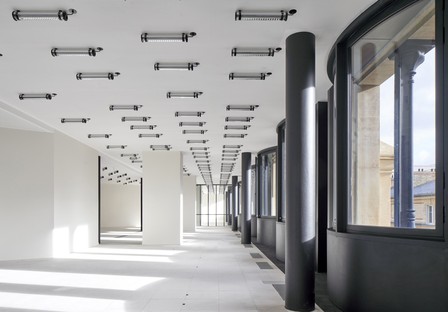 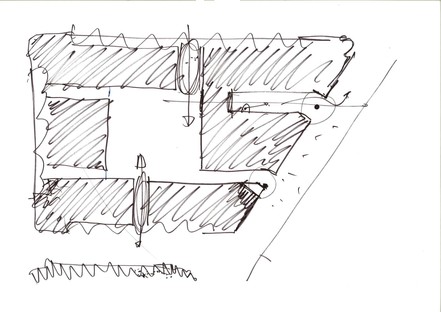 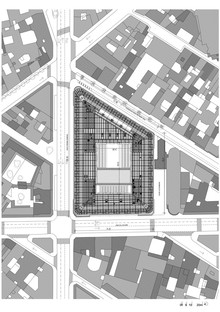 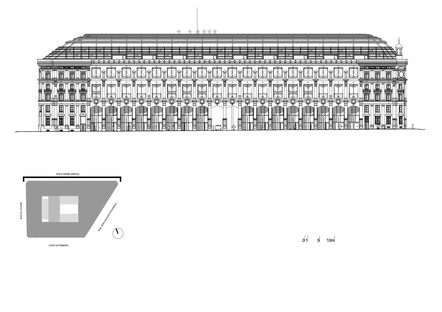 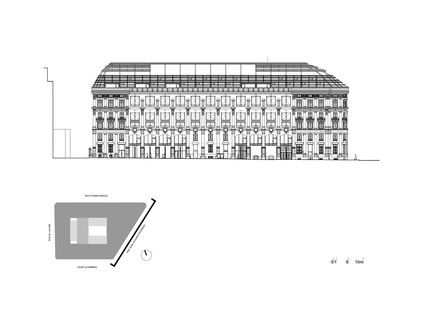 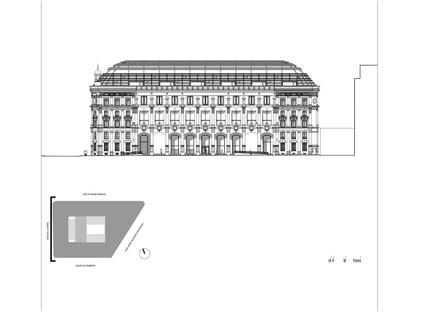 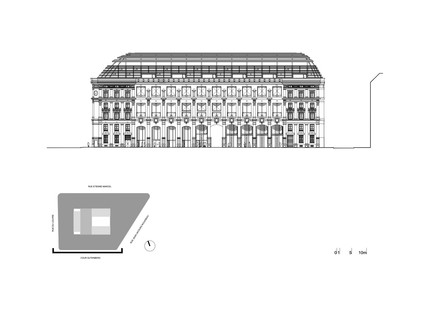 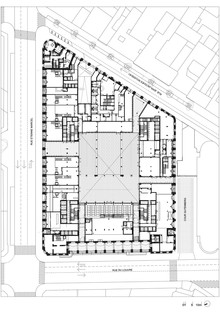 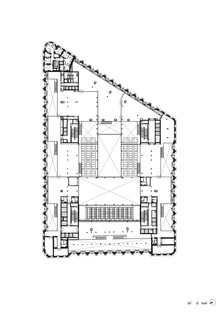 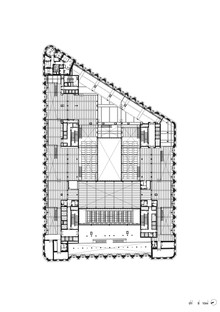 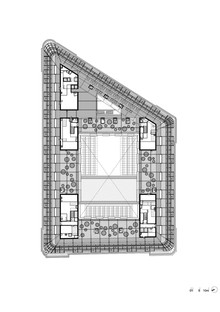