The second house in the Solo Houses residential project in Matarraña, Spain has been built. OFFICE Kersten Geers David Van Severen came up with the design of the new Solo House in the form of a double ring of concrete with clear, perforated and sliding walls. 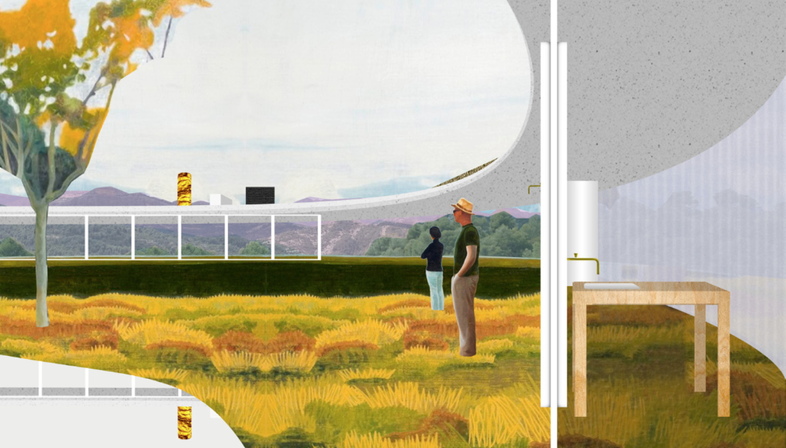 The second Solo house in the mountainous region of Matarraña, south of Barcelona, is a residential experiment included in an ambitious construction programme “without a client” known as Solo Houses. After completing the first building in 2013 to plans by the Chilean duo Mauricio Pezo & Sofia von Ellrichshausen in Cretas, another experimental holiday house has now been completed atop one of the plateaus of Matarraña, the Solo House designed by Belgian architects OFFICE Kersten Geers David Van Severen.
What the two projects have in common is not only their location, on rocky land planted with vineyards and olive groves amidst luxuriant vegetation, but also their point of view. Like the Solo Pezo, the villa designed by OFFICE Kersten Geers David Van Severen seems to want to hide amidst the tall trees, an isolated, hieratic monument to itself and to the contemplation of nature as an everyday experience.
The two projects also share the same construction material, bare concrete with a smooth surface. OFFICE Kersten Geers David Van Severen designed a building with a rigorous geometric shape: a ring. Two rings of concrete measuring 45 metres in diameter are superimposed to form the floor and the roof, with four straight rows of eight bare concrete columns in between them for structural support. A number of metaphors might be applied to the project, from a UFO shuttle to “Your rainbow panorama”, the round walkway of coloured glass artist Olafur Eliasson installed on the roof of ARoS art museum in Aarhus. Or, as Bas Princen, the well-known photographer who provided the photo feature on the Solo House, suggests, the Belgian architects may well have been influenced by the tetrahedral truss kite designed by Alexander Graham Bell, who studied this kind of “toy” before experimenting with construction of a true airplane.
Whatever the metaphor, the project definitely has something to do with flight, at least indirectly. The total absence of any apparent connection with the ground, other than the gravity of the structural material it is made of, suggests the idea of a temporary home, which is what a holiday home really is. Very few wall dividers break up the functions in the spaces, which include a living area, a bedroom area, a guest area and a swimming pool. Clear walls made of floor-to-ceiling polycarbonate panels (also suggesting lightness) cut the house into four areas, forming a glass square facing onto the inside of the ring. On the outside, on the other hand, the arcs of the walls are sliding perforated panels of sheet metal, forming a sort of perceptive barrier which lets light filter through.
Guests will find the interior of the home bare and Spartan, with polished concrete floors and only a few simple but refined works of art and objects, such as furnishings by Richard Venlet and by Muller Van Severen.
As in Solo Pezo, the overall layout is guided by the attempt to achieve symmetry, which appears to be the only element conceptually separating the construction from its natural surroundings.
In this exploration of spatial confines, in the indeterminacy of the boundaries between inside and outside, between shelter and freedom, between artificial and natural, lies the effort to reduce the built space, make it almost invisible, and ensure that its qualities underline the natural beauty of its surroundings. The home as a place where we don’t need to defend, protect, hide, or isolate ourselves from the wild dimension. Even more than in the Solo Pezo project, transparency, lightness, flexibility, and the absence of objects and structures make the architecture secondary in importance to its uncontaminated natural surroundings, doing away with all boundaries.
In this sense it is only natural that the building should be energy self-sufficient, as the lot is not connected to any sort of grid.
Photovoltaic panels on the ring-shaped roof supply heat and electrical energy for storage, while water is drawn out of the ground and purified to be returned to it after use. What makes these service volumes unusual is the way artist Pieter Vermeersch has transformed them into a site-specific installation by applying acrylic paint: the colours on the cylindrical tanks give the image of the home a pictorial dimension, in a representation of reality, a performance perfectly expressed in the home designed by OFFICE Kersten Geers David Van Severen. 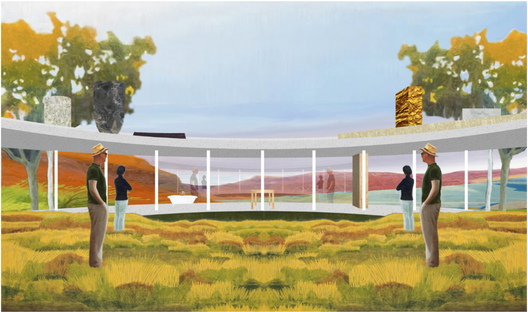 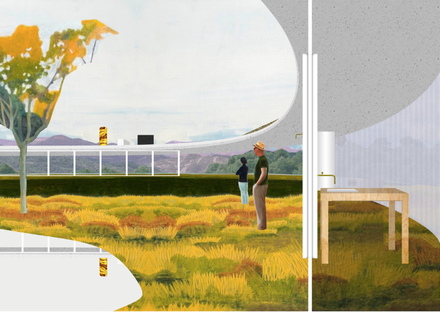 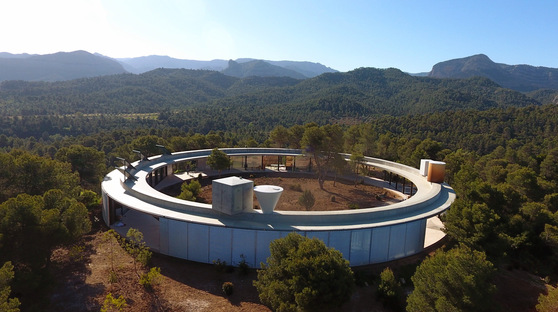 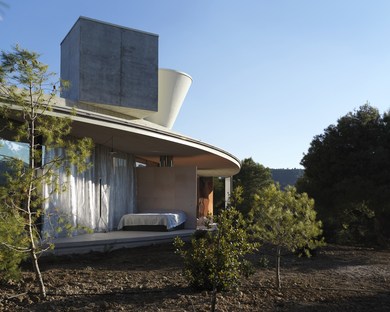 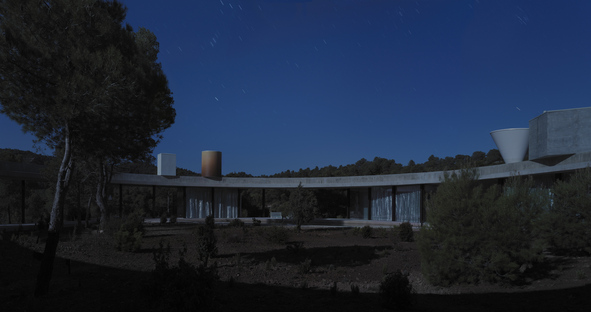 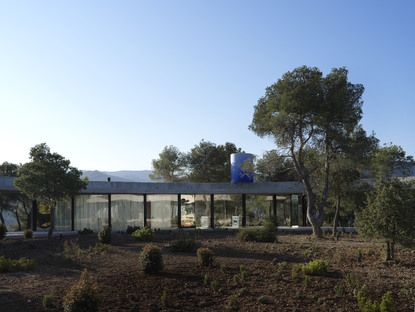 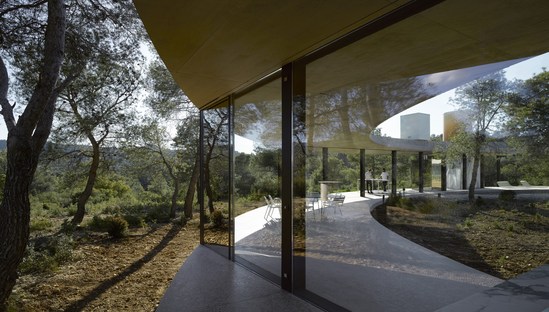 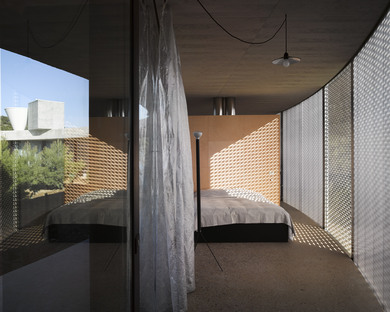 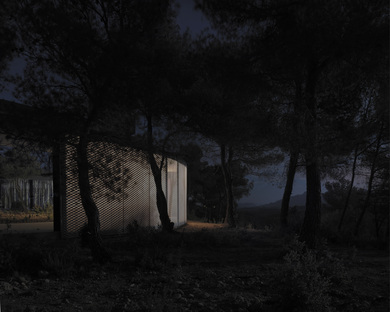 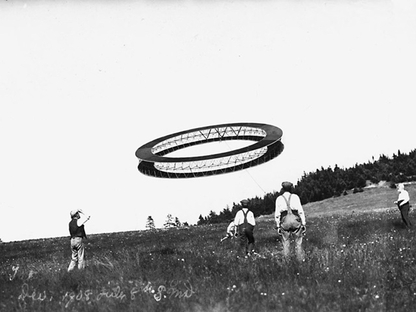 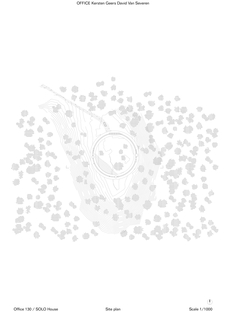 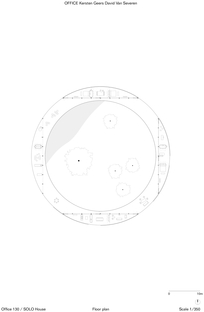 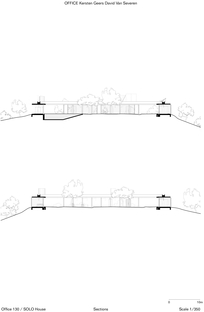 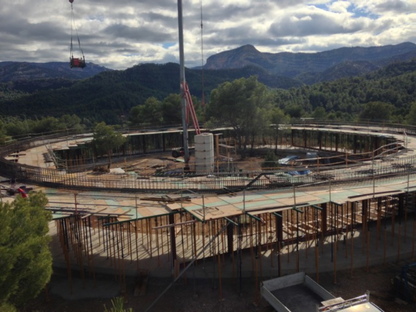 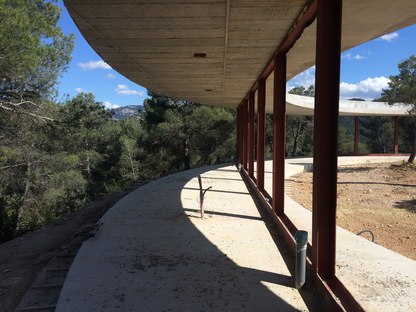 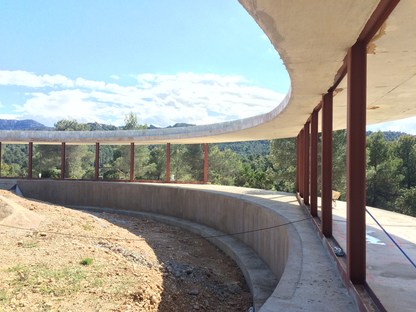 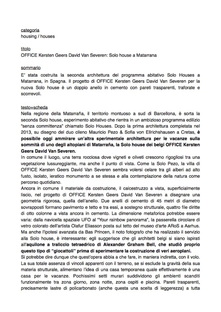