Daniela Baráčková and Jakub Filip Novak (No Architects) have transformed an apartment in Dejvice, the university district of Prague. Starting with a less-than-ideal distribution of the rooms, the designers created a single 16-metre run of communicating spaces along the external façade, making for an interesting sense of flow and unity. 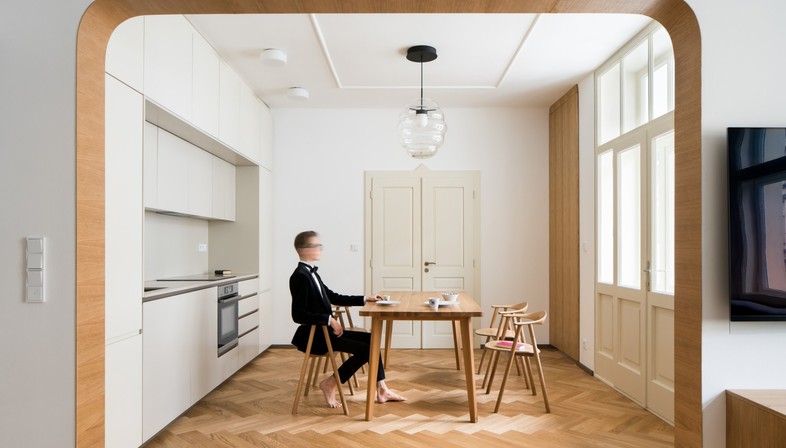 Daniela Baráčková and Jakub Filip Novak founded their architecture firm, No Architects in Prague, with the aim of approaching design with a blend of art and spatial organisation. Having met during their time at the Academy of Arts, Architecture and Design in Prague, they went in different directions with their professional careers before ultimately reuniting to establish No Architects.
The attention to detail seen in their plans for interiors and furniture design is perfectly represented in this recently renovated Dejvice apartment, which provides a significant and representative insight into how these two designers work.
The flat in question spans just over a hundred square metres and is located within an early 20th-century building. The block is situated in the heart of the Dejvice neighbourhood - a university district with a wealth of green spaces, home to much of the city’s middle class and still particularly well cared-for - in which the city has managed to strike a healthy balance between safeguarding its heritage and establishing a modern image. Its status as a highly desirable area meant that the clients felt the need to entirely redevelop a home with a less-than-ideal internal distribution which detracted from its usability, despite its quite considerable overall size.
What can be seen in the floor plan from a survey is a row of rooms running along the façade walls, with only one overlooking the street, in addition to a second row of blind spaces. The well-lit rooms - which communicated only in pairs - were used for isolated functions, whilst the two windowless rooms were only usable as storage rooms or service areas. Despite its considerable size for a home in such a central, highly sought-after area of the capital, the flat was entirely compartmentalised, with the people - who had no opportunities to socialise with one another - living in a cramped environment despite the generous dimensions of the apartment as a whole. As such, establishing a sense of unity for the overall flat was the primary objective of Daniela Baráčková and Jakub Filip Novak’s project.
The 16-metre-long straight run along the façade wall, which represented a major constraint, was transformed into an advantage by the decision to make it a feature. Indeed, the central wall - which once forced the residents to use the flat as two discrete units - was knocked down; meanwhile, the centrally located doorways in the other dividing walls were enlarged, made from single into double doors, thus lending them more of a symbolic value as thresholds and highlighting the point of transition between the different spaces.All four rooms are now part of a single, cohesive whole. The two central rooms have been set up as the living area - with a kitchen-diner in one and a sitting area in the other - whilst the two outermost rooms have been used as the bedrooms: one master bedroom and another for two children. Whilst these bedrooms, as well as the living room, are very similar - each symmetrical on the longitudinal axis and illuminated by a large window - the dining area gives onto a balcony and is completed by a small room that overlooks the balcony: an unusual configuration by any measure, and one whose origins remain entirely unknown. It may, at one point, have been a small bathroom with a window, as suggested by the tiled flooring, which differs from the other rooms. The architects have seized the opportunity to make the most of even this small, additional space, transforming it into a cosy little study, complete with a door to isolate it from the busy central hub of the house or, if desired, left open to become part of the whole: a corner set up with a made-to-measure desktop and seat, using the walls as built-in bookcases.
The master bedroom has sacrificed a small part of its overall size to allow for a walk-in wardrobe that communicates with the bathroom. Once upon a time, this was the only bathroom in the apartment, and as such, it communicated with both the master bedroom and the entrance hall; now, with the latter door sealed off, it has become the master en suite. In said entrance hall - which was entirely too large for the flat - the architects have created a second bathroom, the walls of which form an L-shaped hallway that leads to the living area, lined with floor-to-ceiling built-in storage units.
Opposite the front door is a niche carved out of this wall of wardrobes, made especially to hold hats and coats, whilst a large mirror positioned on the corner offers a sense of openness and communication. A deliberate decision was made to have parquet flooring in every room, lending a certain continuity and flow to the home: the herringbone laying pattern is a stylish effect for the interior design, an early hint at the attention to detail that characterises the entire apartment. With this new spatial layout, the hallway helps to physically isolate the main rooms of the house - which flow together into a single, communicating heart of the living space - from the entrance and the common staircase.
The design of the décor and the material finishes was derived from a careful study of the original style of the building. For example, the motifs on the MDF radiator covers were inspired by those on the railings of the common stairways; the pointed shapes of the door frames replicate the stucco decorations that adorn the windows; the pink cushions on the headboard echo the design of the window grilles, and so on. White varnished wood or oak veneer and brass form the basis for the palette of colours and materials used, with the addition of cushions for a splash of colour: blue in the lounge and dusky pink in the master bedroom.
The beds, bookcases, tables and storage units have all been designed with a precise style and refined lines, coordinating each room and creating that sense of unity that was the intended goal since the very first wall came down. 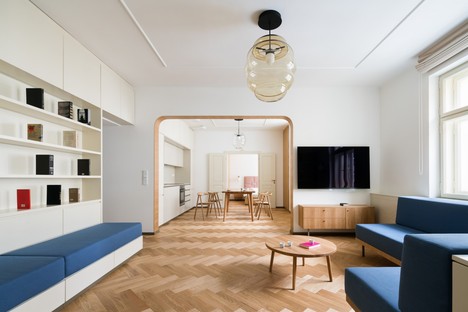 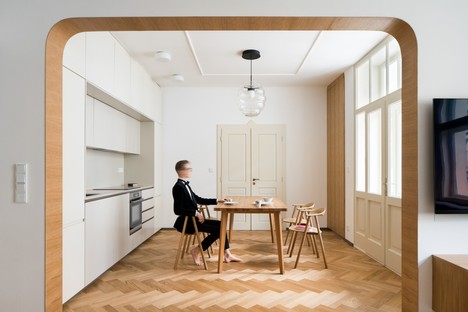 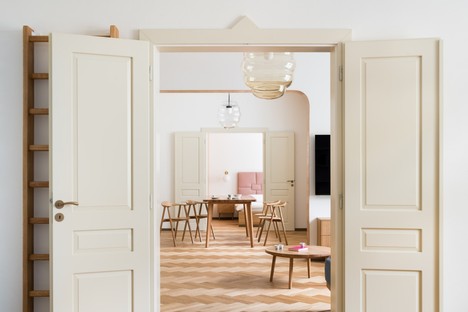 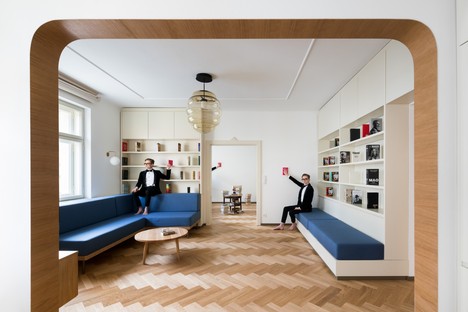 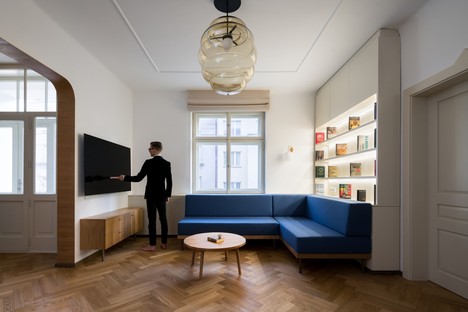 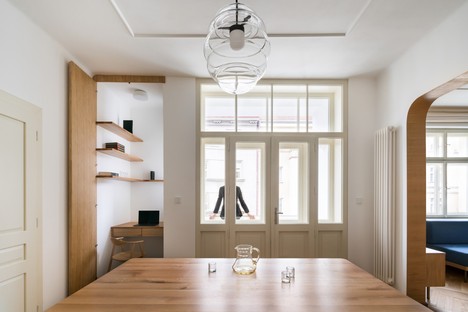 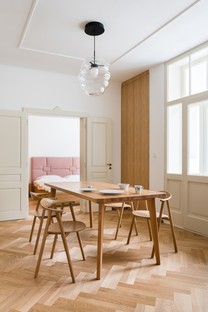 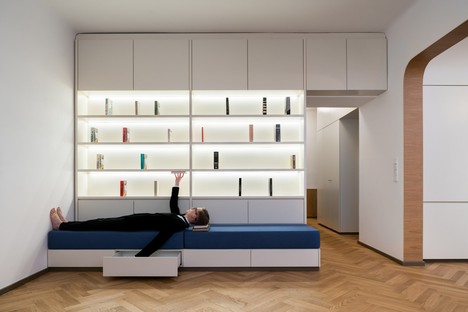 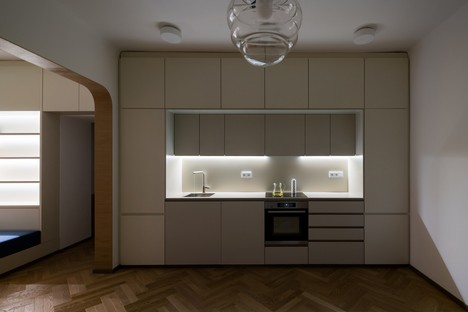 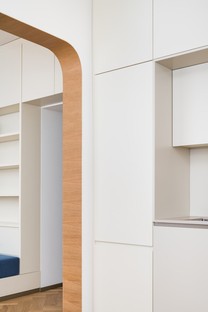 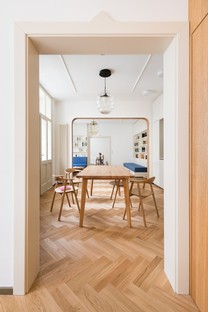 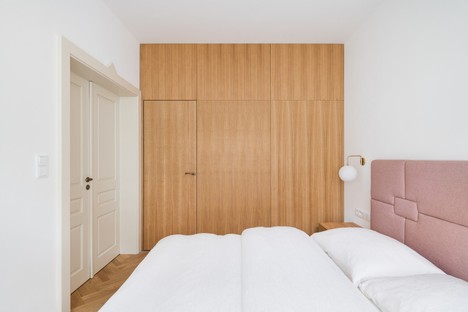 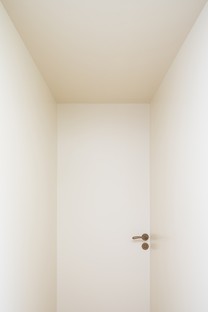 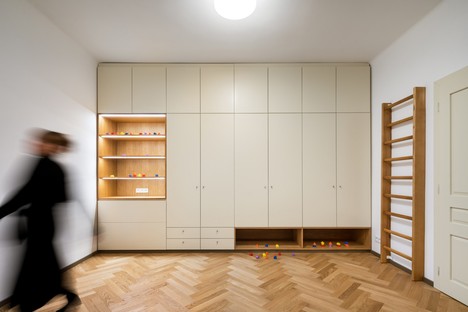 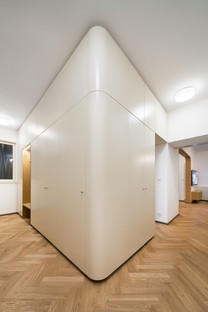 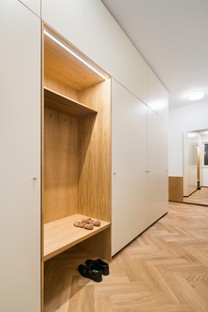 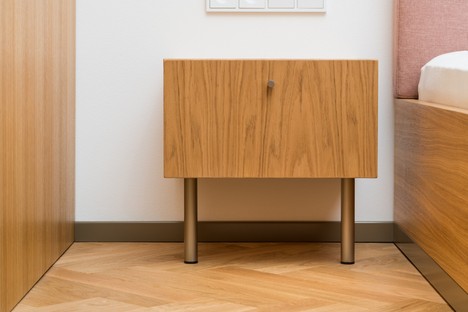 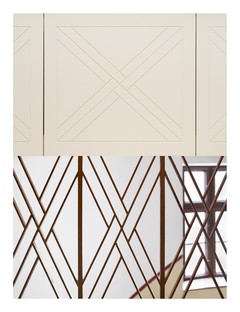 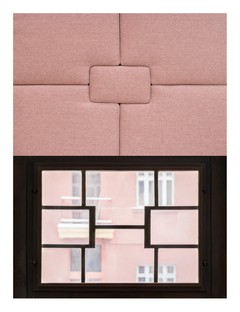 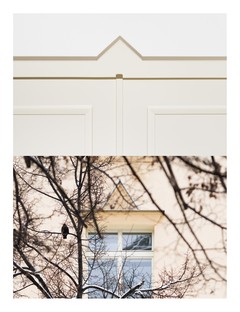 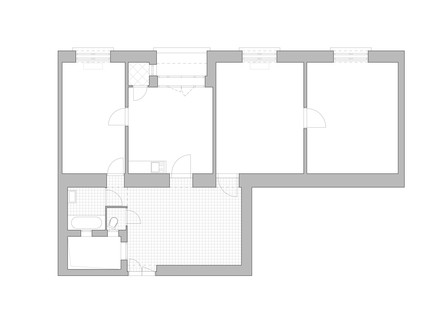 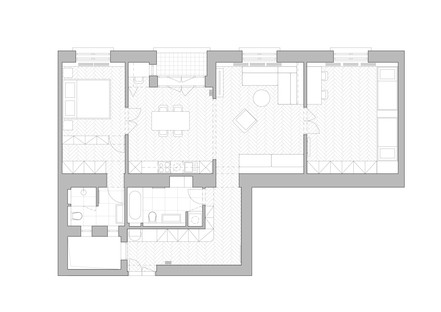