One of the first interventions completed by Malfinio, Martina Homolková’s new architecture firm, is the renovation of an interior in Bubeneč, Prague. In a corner building with a bay window, the change of internal circulation offers a new interpretation of the apartment, complemented by numerous customised furnishings for atypical and irregular spaces. 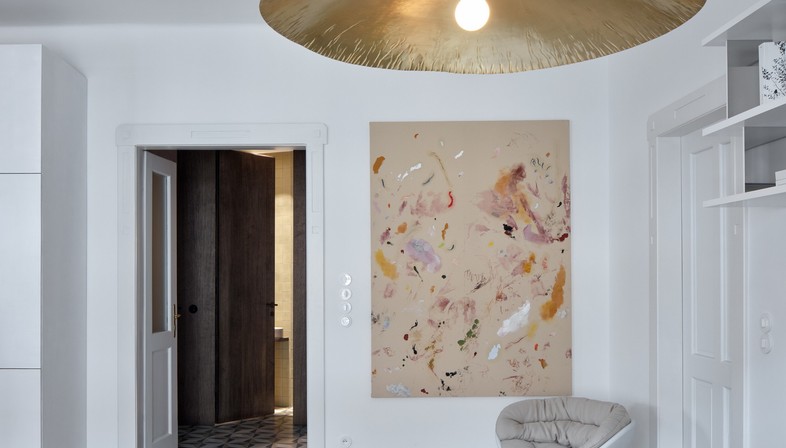 After five years at Formafatal, the architecture and interior design studio founded by Dagmar Štěpánová, Martina Homolková felt ready to open and run her own studio, which she named Malfinio and which she has imbued with her bold approach to design. One of Martina’s first solo experiments was an apartment in Bubeneč, the so-called "little Moscow" of Prague, in the north-eastern part of the capital, located inside an early 20th century building.
From her first inspections of the apartment, Martina Homolková quickly grasped that the interior still retained a few original details that had survived, such as the carved wooden frames or the coffered panelling. The architect’s decision was to preserve them, keeping the link with the building’s history intact. In terms of layout, we find ourselves in a corner building, overlooking the street front from no less than five large windows, including a striking bay window right at the corner. The entrance on the opposite side consisted of a large hallway, onto which several small rooms, a bathroom, a first bedroom, the living room at the back and then a larger bedroom overlooked. Other interesting aspects were the potential of the many storage closets and the irregular floor plan of some of the rooms, which inspired atypical layout configurations.
The clients, for their part, had expressed few and very concrete requirements: they had chosen cement floor tiles with a star pattern in grey, mustard and beige, they wanted an island in the kitchen with a mirrored finish, and they wanted to be able to insert some existing furnishings, including the bed, which they already owned. Martina Homolková inserts these as fixed elements, around which her project revolves, providing a master bedroom, a room for the clients’ young daughter and allocating some small cabinets as storage for her toys.
The desire for sharing felt by the family members was translated by the architect into the design of the main space, consisting of a living area and bedrooms. A secondary space, consisting of a hallway and bathrooms is then introduced. In order to achieve this net separation, the design inserted closing partitions between the hallway and the living area. The entrance to the apartment now takes place through a less brightly lit area, which simply serves as a passageway to a brightly lit space where one is inclined to spend the majority of the time. 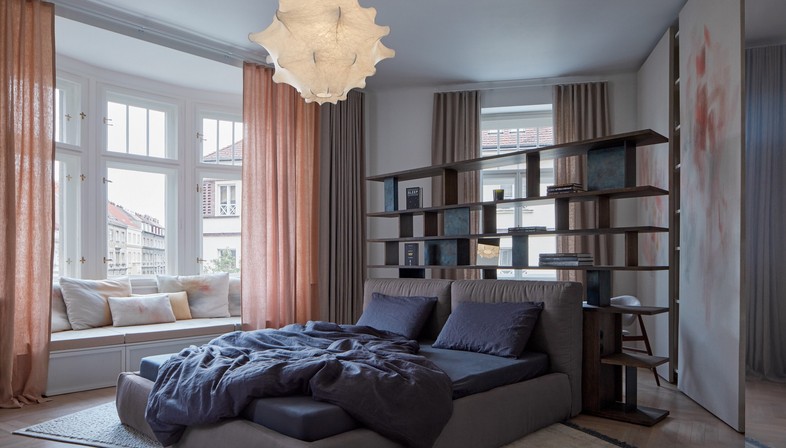 The passageway from the entrance to the first bedroom, now used as the child's bedroom, was closed off with a wall in which a storage niche was cut out. Another set of partitions was raised to close off the main passageway between the corridor and the living room, adding a bathroom and creating a small separate restroom. By knocking down the dividing wall in the centre of the apartment, a large living area was created with a living room, a TV and bookcase on one side and a kitchen island and dining room on the other. The master bedroom and the child’s bedroom are accessed from the sides.
By modifying the apartment’s circulation, it was possible to enlarge and define more relationships within the main space, leaving the secondary space to the more private or uniquely functional areas.
Based on this philosophy, the parents’ bedroom becomes a sort of extension of the living room, behind the large double door. Given its irregular floor plan and large size, an open bookcase has been inserted in the middle of the room, dividing the available space into two parts, one taken up by the wardrobes and the bed, and the other, concealed behind, used as a small study. The bay window has been traditionally used, setting up a soft sofa as a bright reading corner. Finally, the central room opens onto the child’s room, furnished with Montessori-inspired elements.
In addition to designing the spaces, Martina also oversaw the selection of all objects, lamps and fabrics, and was responsible for the customised design of many of the furnishings necessitated by the non-orthogonal walls and atypical spaces.
Materials, colours and textures play a crucial role in defining the new image of the apartment. The natural concrete with a rough finish used for the entrance hall walls and for the bathrooms helps to create a dim atmosphere. The mirrored surfaces covering the furnishings and the walls, serve as a contrasting trait d'union. The fumè oak parquet flooring in the main spaces is attentively combined with a palette of soft pinks, greys and golds that offer an image of refinement and order. Finally, a number of non-customised pieces have been selected as accents, from the sofa to the lamps, while other details, such as the essential bulb pendant lights and round electrical sockets emphasise the importance given to every little detail. 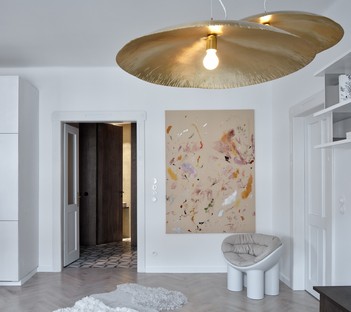 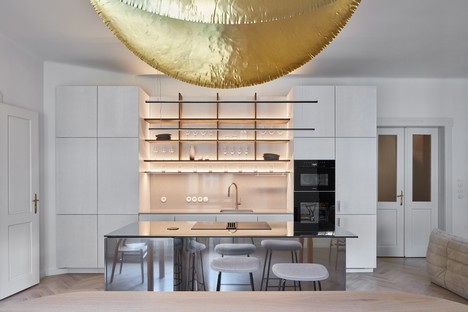 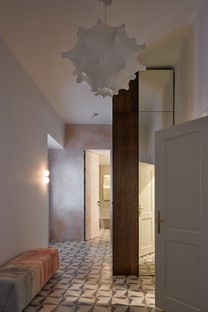 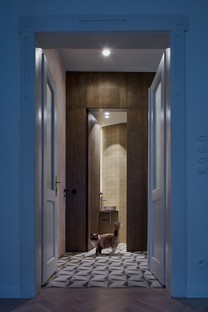 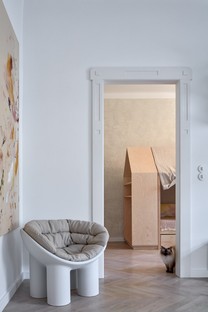 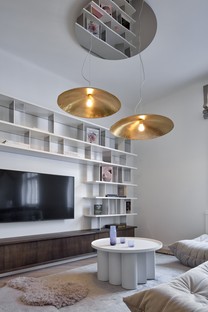 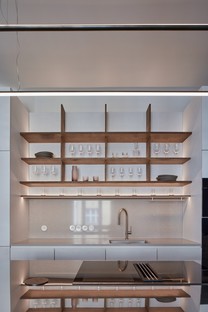 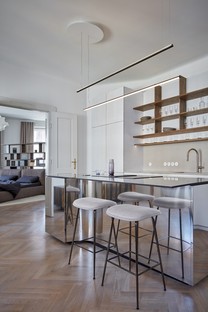 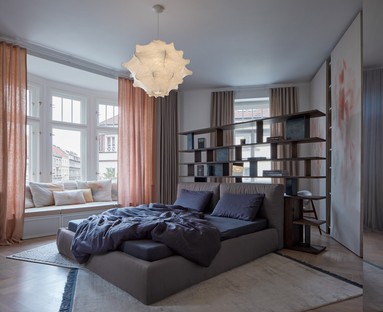 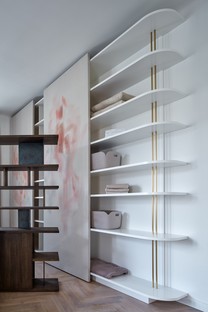 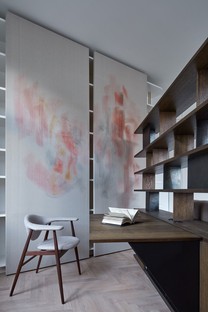 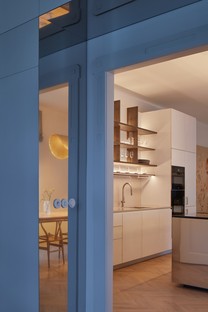 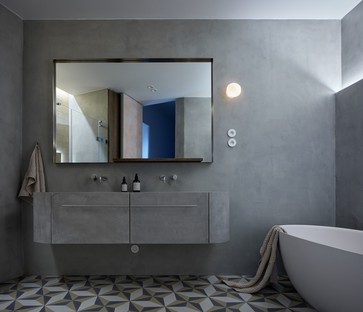 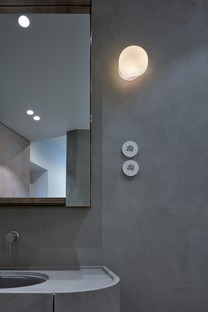 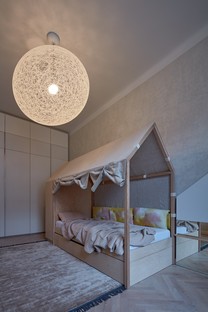 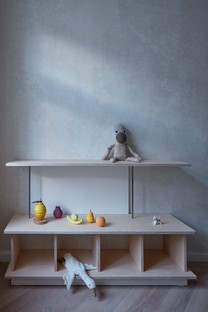 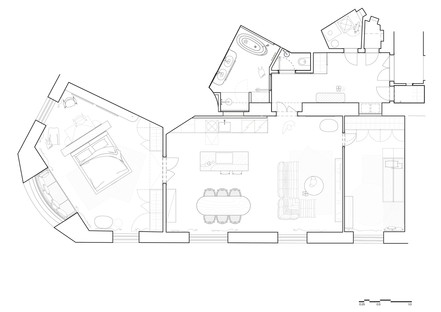