Dutch firm Mecanoo Architecten has designed the new student residence for the University of Rotterdam, a 9000-square-metre building wrapped in a gold sheet which houses 281 living units of various sizes as well as common areas, including a large roof terrace which offers panoramic views over the campus. 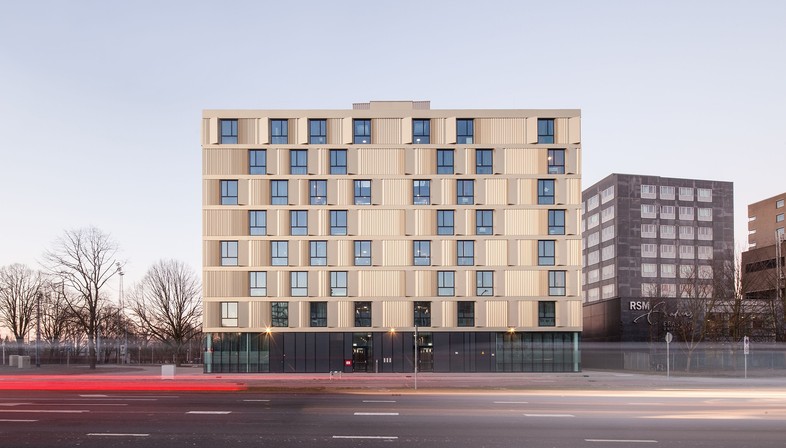 Rotterdam is a constantly-growing city, and so too is its university. The Erasmus Universiteit Rotterdam, with more than twenty thousand students, contributes to the insatiable demand for affordable housing. With all the student residences already filled and in order to address this dearth of housing, the University asked Mecanoo Architecten to design a new housing complex for its students.

The building is located in an important area of the campus, overlooking the intersection of Abram van Rijckevorselweg and Burgemeester Oudlaan, two of the main streets running through the city. As such, the site thus offered the architects the opportunity to create something with a strong visual impact, highlighting the identity of the Erasmus Universiteit and the campus. The downside for such an incredible opportunity was remarkably minor: it was simply a matter of considering, at the design stage, the noise pollution due to traffic in order to deal with and minimise it.

In Mecanoo’s design, completed at the end of 2018, a total walkable surface area of 9000 square metres is spread across eight floors, divided up into common areas and 281 residential units ranging from 20 to 40 square metres each. A large central courtyard has a dual function: to allow light and air to reach all the rooms and to create an internal path system, in continuity with the road network of the campus, used by both cyclists and pedestrians. Also in the courtyard on the ground floor are shared study areas, a porters’ lodge and communal services, such as a laundrette and bicycle parking.

At twenty-five metres high, Mecanoo’s student residence, seen from the outside, appears to be a large cube characterised by a geometric and misaligned texture, in turn the result of large square windows. A cube resting on a transparent base, where the ground floor is higher than the others and home to residential units with irregular shapes and surfaces. This plinth, at four metres high, has thus allowed the architects to place a mezzanine containing a bed in the rooms, under which is located the bathroom. The upper floors are home to more regularly-shaped units of 22 or 24 square metres, positioned around a circular corridor which has different colours and patterns on each floor, so as to facilitate orientation and make the interiors more lively and dynamic.
The most interesting area in the building is the communal roof terrace. This generously-proportioned space offers an equally generous view over the university campus. It is a welcoming and comfortable wood-clad space designed for any and all activities, from group study to mere relaxation, or even a few rooftop parties.

The residential complex designed by Mecanoo has a classic vertical subdivision: a base, a body and a crown. Whilst the base, as already mentioned, is transparent, the main part of the façade is wrapped in golden aluminium panels. These do not have a smooth surface, but rather are folded like an accordion. Their geometric irregularity means that, thanks to the incidence of the sunlight or a viewer’s perspective, the building is iridescent, glimmering with golden and silvered flashes of light. On the top floor, to outline the crown, the aluminium panels are arranged in a mirrored way so as to emphasise the dynamism of the façades themselves. One last detail: the accordion folds on each panel are not random, but rather designed specifically to encourage incoming airflow and deflect, as much as possible, the noise coming from the road.

The entire building was built in just one year, thanks to the prefabrication of every element of both the structure and the façade, including the windows. It took five years of planning to finally put up the student accommodation, with the building site staying open less than a year, just in time for the start of the academic year that has just ended. 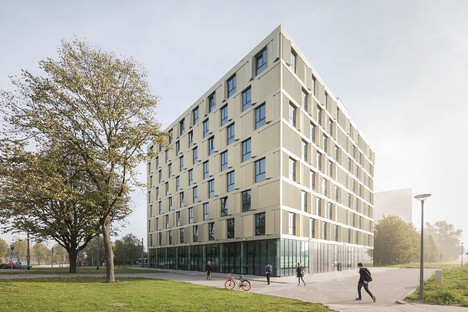 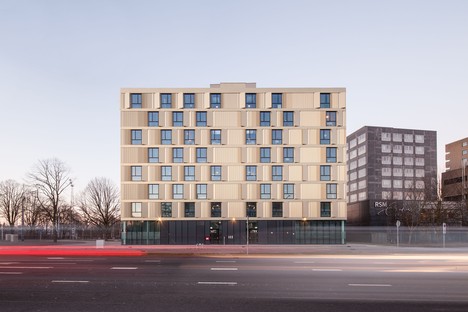 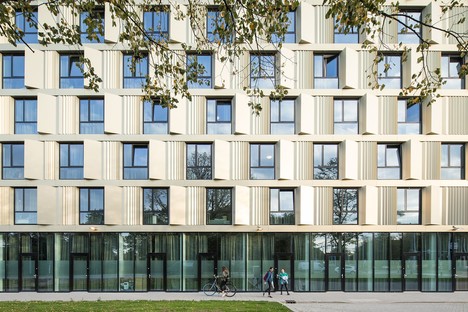 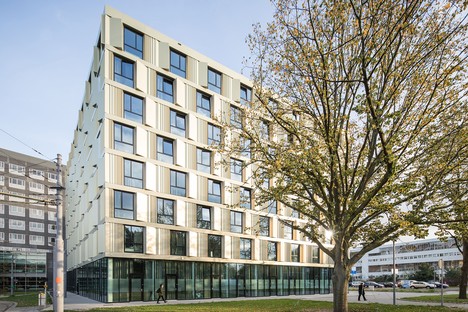 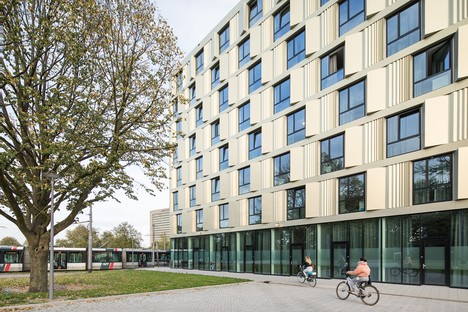 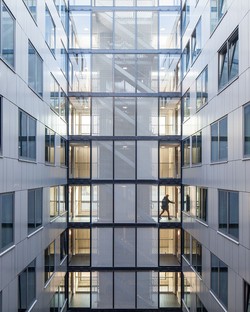 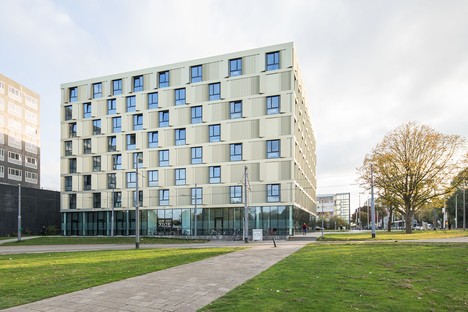 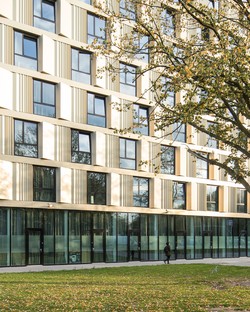 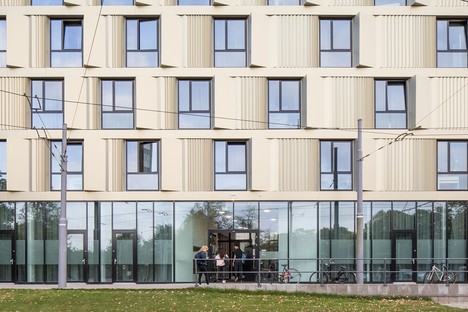 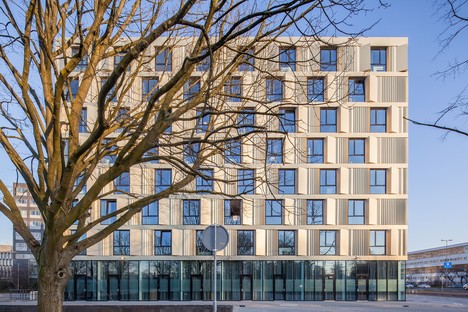 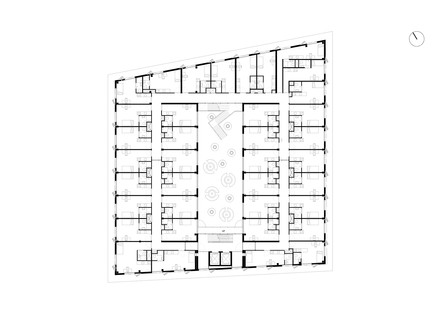 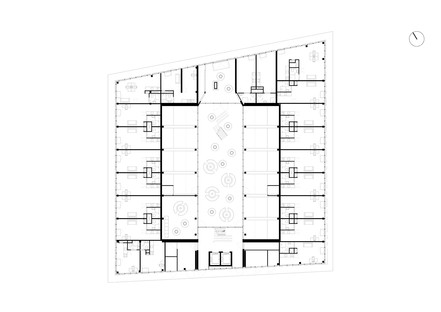 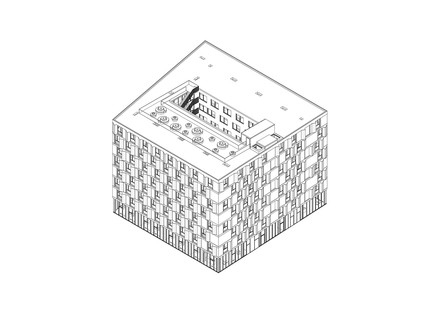