De Kapel, the complex located in Rotterdam and protected as a national monument, has become the home of Hospice de Liefde, a centre for the care of terminally ill patients. Commissioned by Stichting Volkskracht Historical Monuments, De Kovel and Studio AAAN renovated and extended the 18th-century farmhouse. 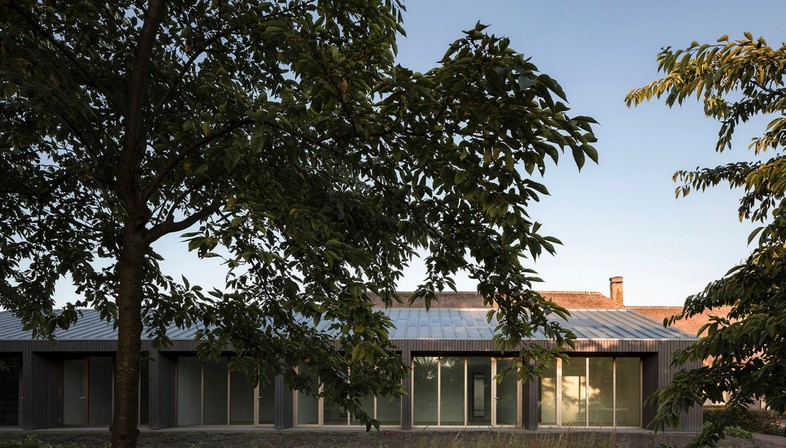 A few years ago, Stichting Volkskracht Historical Monuments - the Rotterdam-based foundation responsible for acquiring, restoring and maintaining monuments registered on Dutch soil - gave De Kovel Architecten and Studio AAAN the task of renovating the historical De Kapel farmhouse. Located at the edge of the Zuidwijk residential neighbourhood to the south of Rotterdam, the monument has been functionally redeveloped and extended in order to transform the building into a small centre for the care of the terminally ill, now known as the Hospice de Liefde.
According to a note by the architects, this farmhouse - classified as a National Monument in 1975 - is an 18th-century building which consists of a main body made of brick and wood, with a thatched roof, a collection of outbuildings originally used as animal and wagon sheds, and a barn. Over the years, the main structures have seen many changes and new brick buildings have also been added, though it was decided that these should not be preserved during the work step before De Kovel Architecten and Studio AAAN’s intervention, meaning that only the original structures were ultimately restored.
With an imposing trussed wooden roof with a thatched covering, typical of these Dutch farm buildings and of considerable interest due to its rarity, the building stands on a vast, open green plot surrounded by a small lake on three sides. The bucolic atmosphere in which it is set, physically isolated from the residential areas of Zuidwijk, which remain in the background, had already led to the 1992 decision to use the space as a work centre for adults with mild intellectual disabilities.
The designers assessed the situation and saw the need to build a new volume specifically for the guest rooms, instead using the farmhouse itself for ancillary and support services. The identity value of the historical structure has been used as a cohesive element for the small community of patients, whilst the newly designed architecture has instead focused on comfort above all, giving people a space where they can relax and concentrate fully on receiving their care and pain relief treatments. 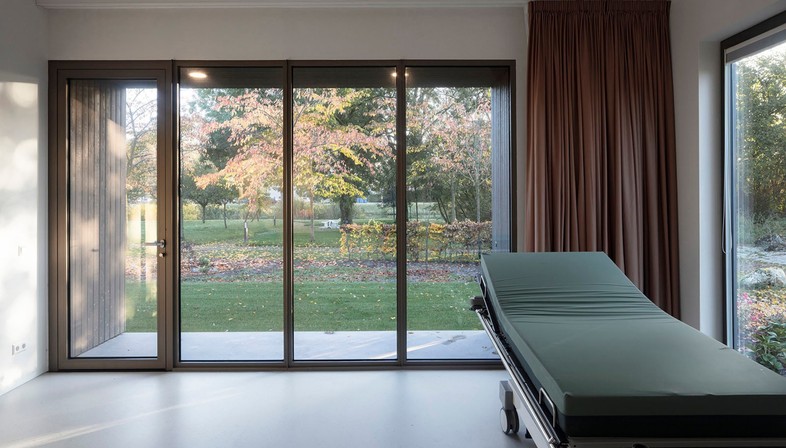 In the monumental volume where the barn once stood, a large lounge area has been created, connected to the staff offices. The main building also houses the kitchens, reception, and a space for rituals, in other words a room which corresponds to the south building where people can come together to commemorate and say their goodbyes to their dearly departed, as per the Buddhist tradition followed by the hospice.
In these spaces, characterised by large 18th-century wooden beams that have now been restored, giving shape to high ceilings that make for open, airy atmospheres in rooms originally intended to be humble and rural, the guests can discern values and an aesthetic intimately bound to the history of the Dutch countryside. Here, they find a sense of community and family, whilst the new wing prioritises the value of privacy and a relationship with nature.
From the lounge, a glass-walled corridor crosses eastwards through the garden, leading to the new building that houses the patients’ private rooms. The path that it creates is intended to offer people a constant opportunity to pass through ordered natural surroundings: not merely a connection, then, but a path designed with wellbeing in mind which emphasises the idea of being in a natural environment as well as a historical one. The view of the rural setting and the enjoyment of natural light are a central component of the residents’ comfort, also recurring in the building which houses the patient rooms: indeed, the new building has been designed with wall-to-wall windows so that each guest can see the outside world, and in particular, the garden and the grove to the east, from the privacy of their final home.
When designing this new structure, the architects claim to have been inspired by a woodshed, a common feature of farms in the area. The pitched roof with no overhang, made of zinc and with integrated dark grey solar cells, provides a handsome pairing for the walls of the wooden structure, which are clad with slim wooden planks.
The choice of wood as a predominant material - both outside and inside, in the columns of the access corridor, in the furnishings and fixtures - is not only a tribute to the historical architecture of the farmhouse and its colour palette, but also a stylistic decision. Wooden finishes, where the material is left natural, are redolent of cosy, domestic atmospheres that offer a greater sense of welcomeness and security. Much like the older building, the new building is also organised on a single floor, not only so as to offer patients fewer obstacles to their mobility, but also to maintain a relationship of scale with its surroundings. This also allows each and every guest room to have a veranda which directly overlooks the garden. Finally, in order to maintain consistently comfort temperatures, the newly built volume is equipped with a geothermal heat pump and a heat recovery ventilation system. 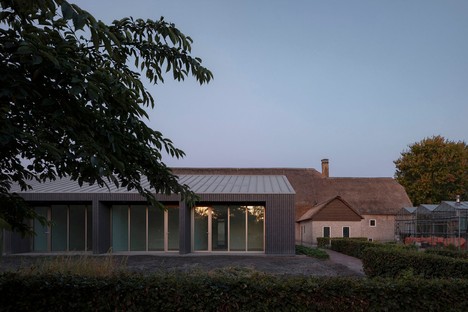 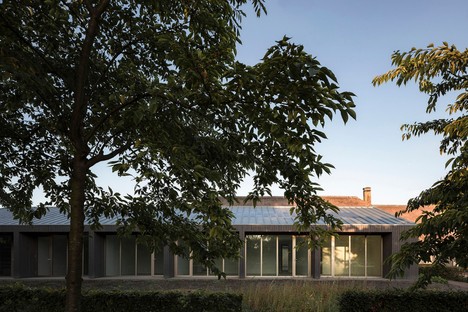 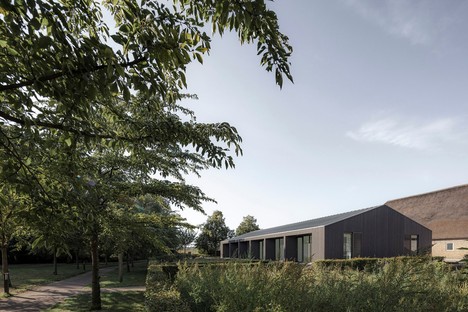 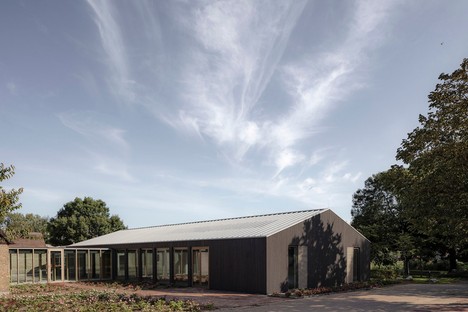 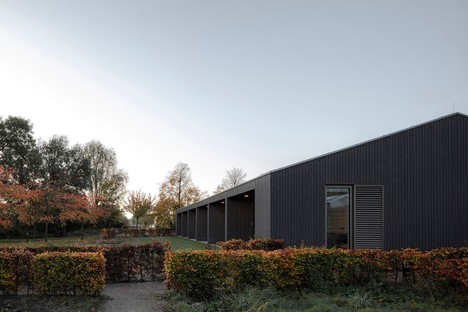 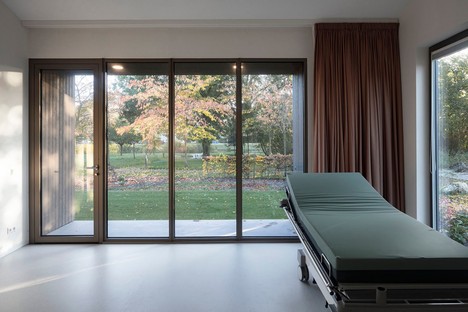 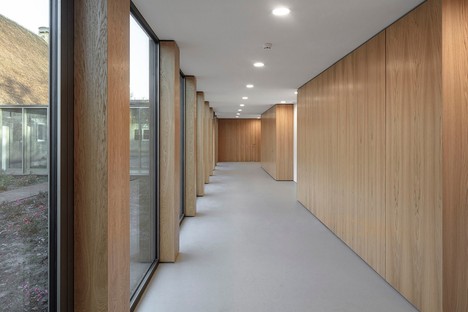 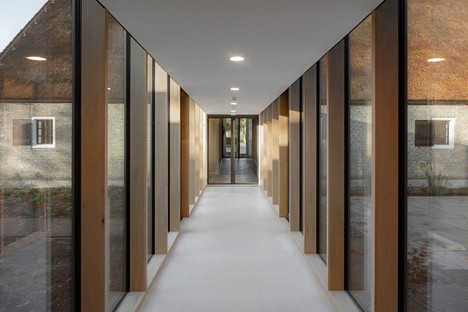 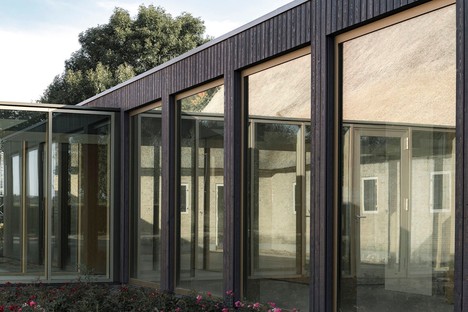 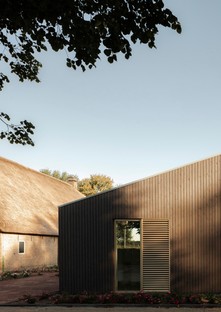 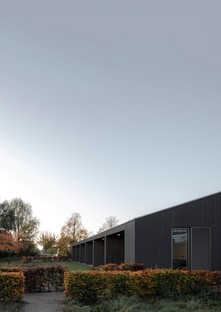 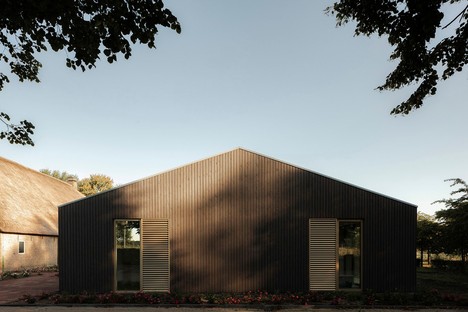 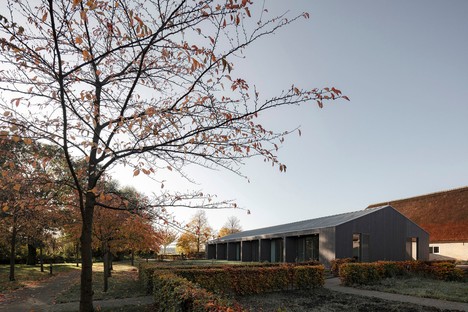 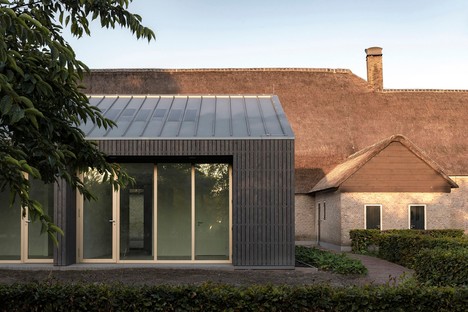 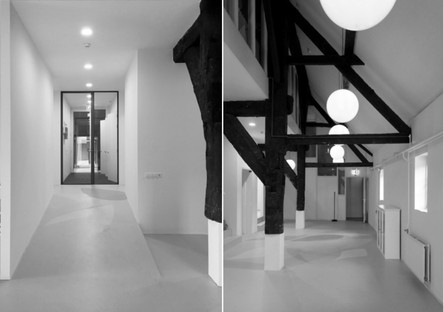 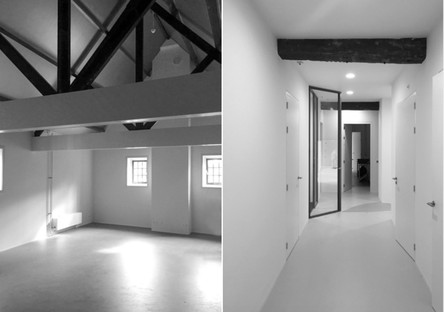 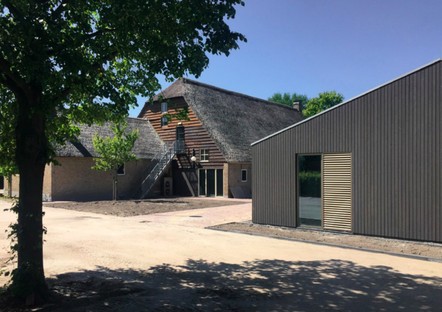 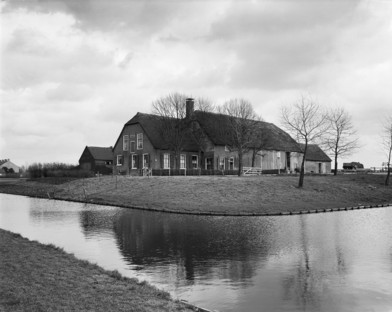 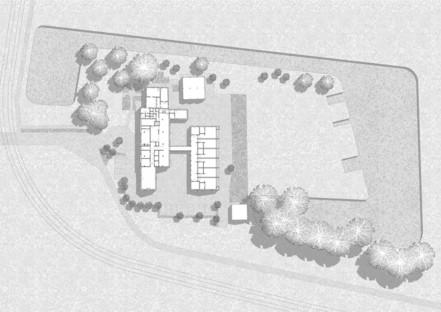 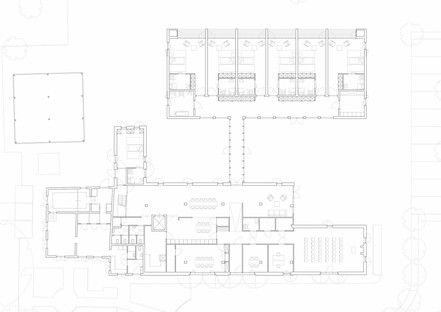 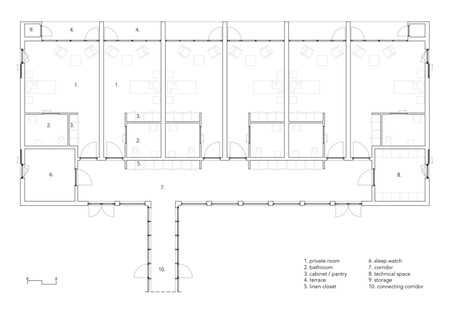 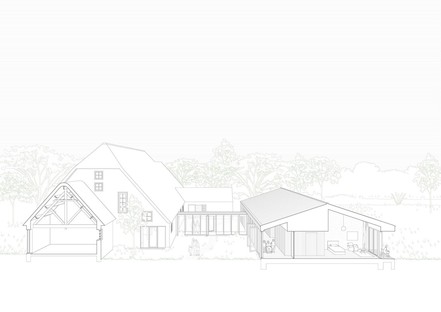