MAD Architects’ YueCheng Courtyard Kindergarten is an example of intergenerational integration from China. The kindergarten commissioned by the Yuecheng Group is located next to a seniors’ home in Beijing, a situation permitting integration of preschool education with seniors’ care in a surreal structure that inspires children to think, reflect and pursue endless possibilities. 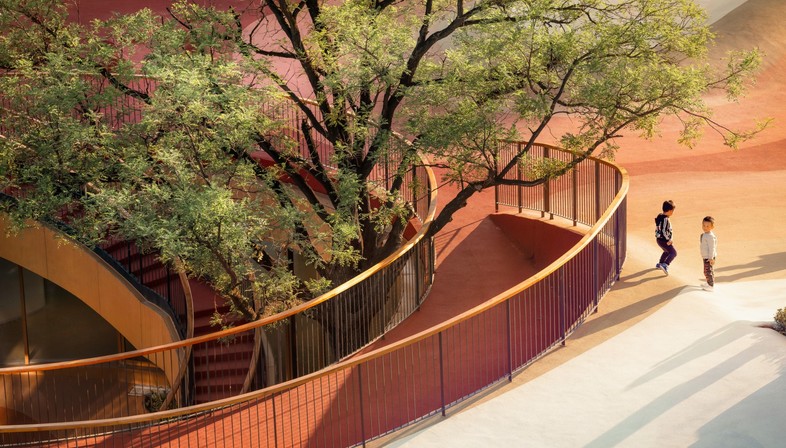 MAD Architects, the studio founded by architect Ma Yansong, designed Beijing’s new YueCheng Courtyard Kindergarten. In the architects’ intentions, the new building reflects the ethics of the Yuecheng Group which commissioned it, offering an example of all-round integration. In architectural terms, the complex was built in an area containing an 18th—century Siheyuan courtyard home, with a replica courtyard built in the 1990s and a modern four-storey building, all sharing the same roof. In functional terms, the new kindergarten offers an example of intergenerational integration, standing next to a seniors’ home, in an excellent position to create a system integrating preschool education for children aged 18 months to 6 years with elder care. Architect Ma Yansong reports that he designed a structure primarily taking into account the “children’s desires”, such as the need to feel freedom and love, offering them endless possibilities.

MAD Architects was appointed to design the new kindergarten on a 9,275 square-metre area in the city centre in 2017. A number of constructions of different ages and types were already present on the site, along with several ancient trees. Ma Yansong succeeded in coming up with a project of great visual impact for the area which demonstrates respect for the existing constructions and the trees, combining old and new in a harmonious dialogue while preserving the individuality of each.
The project’s most distinctive feature is the red roof that appears to float over all the structures in the area, creating a magical atmosphere for the children. On the rooftop, the little ones can play at the level of the foliage, observing the world around them from a new perspective and feeling empowered to achieve even their most unthinkable plans. The kindergarten roof is a magical place which the architect describes as a Martian landscape of sorts, serving as a playground for open-air sports and play. Ma Yansong says it reminds him of an old Beijing proverb referring to children’s infinite energy: “If you go three days without being punished, the roof will cave in!”
When observing the project from ground level, it appears clear that the architects have created a courtyard system to preserve the ancient trees and incorporate the historic structures already present on the site, while providing the teaching spaces with fresh air and daylight. “Here, nature becomes the main subject, and the architecture instead revolves around it,” comments Ma Yansong.
A series of vertical links in the form of stairs and slides connects the roof with the courtyards below, while floor-to-ceiling windows in the classrooms establish visual continuity with the greenery in the courtyard, perceived as an extension of the indoor space. In this harmonious vision, the old Siheyuan home is also connected to the new kindergarten through courtyards and pathways, becoming the preferred site for hosting the children’s extra-curricular cultural, artistic and creative activities and for the staff’s offices. 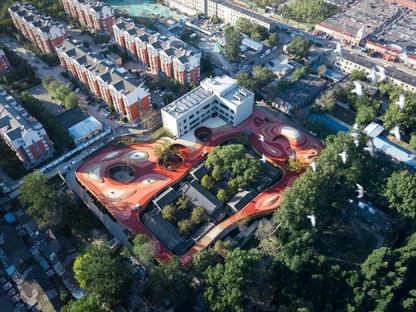 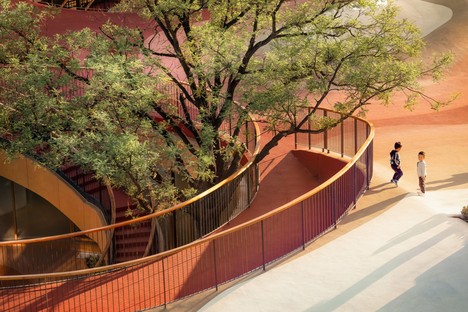 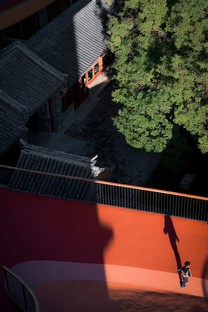 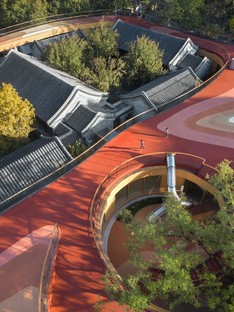 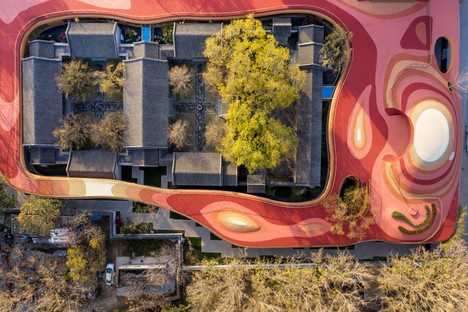 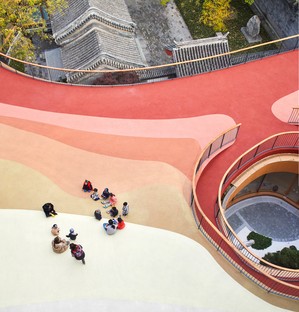 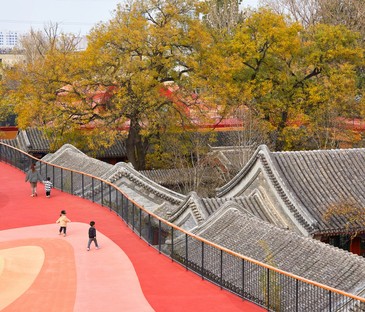 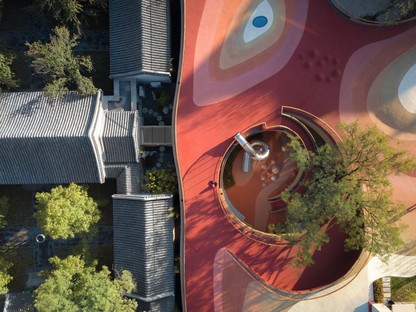 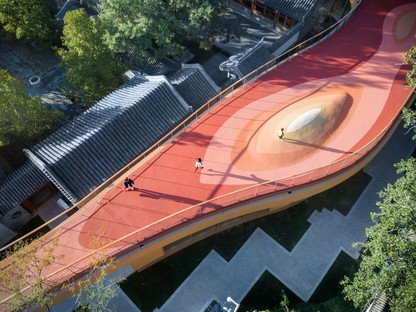 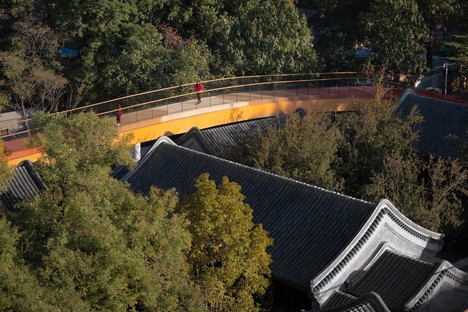 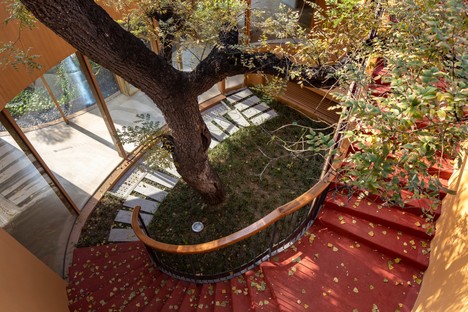 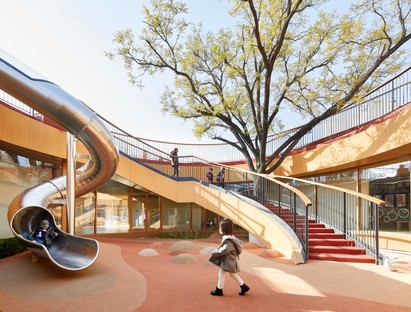 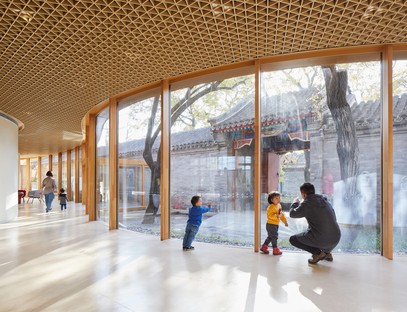 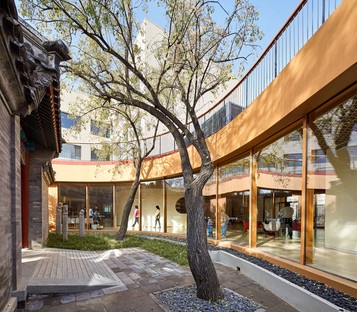 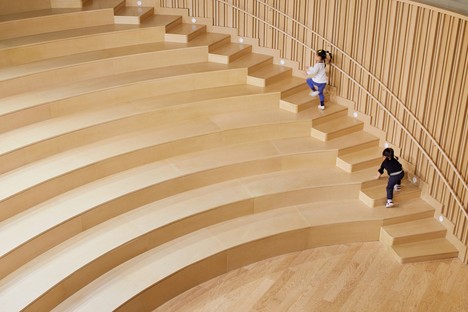 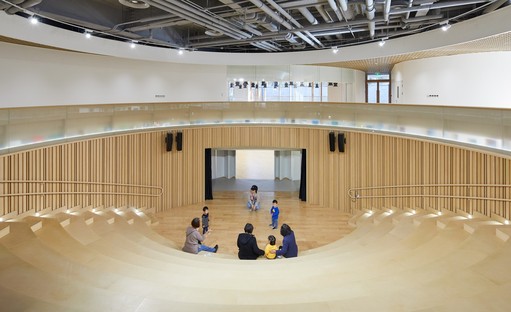 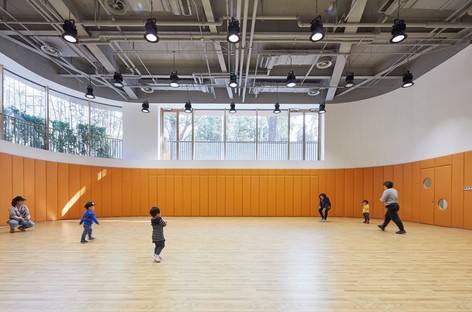 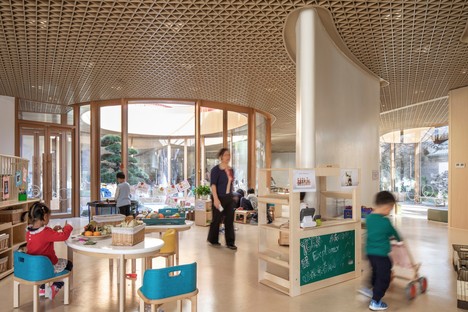 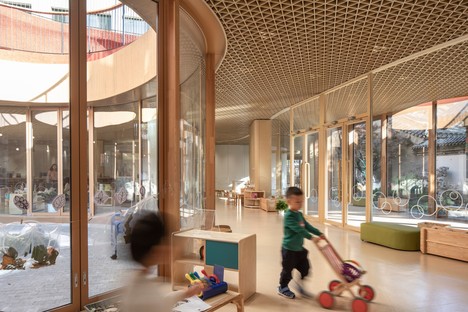 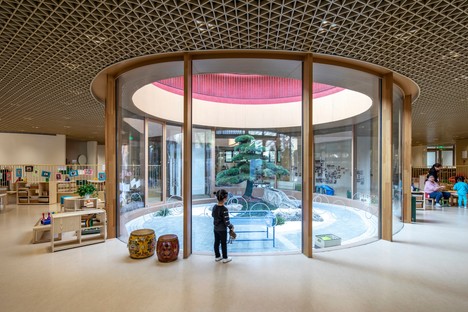 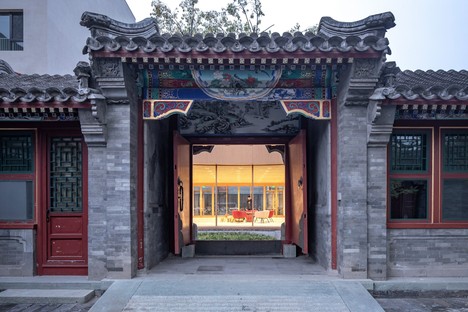 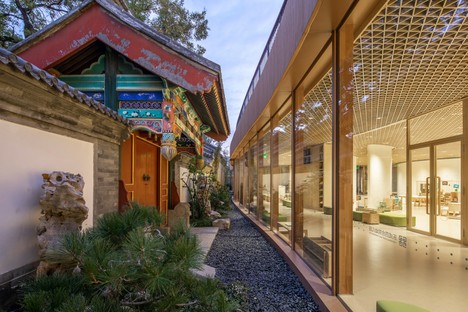