Lombardini22 has come up with a restyling project for Centro Sarca, a shopping centre built under the urban regeneration policy for abandoned industrial areas north of the city of Milan. Lombardini22 transformed the look of Centro Sarca both outside and inside, with a special focus on graphics. 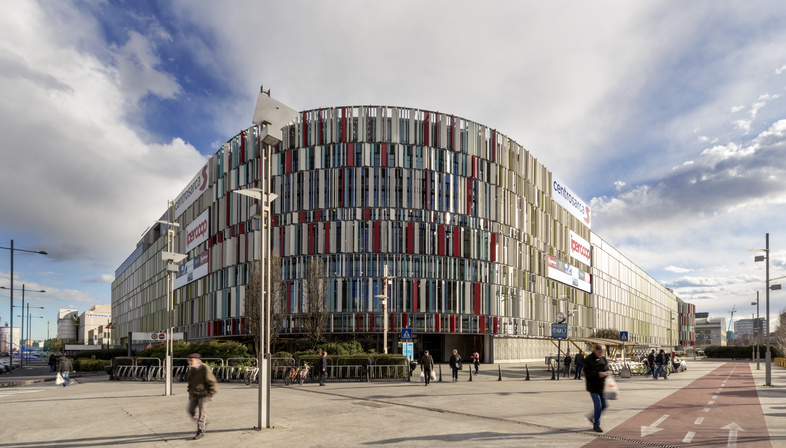 Sarca shopping centre was built in 2003 as part of the urban regeneration policy put in place to the north of Milan over the past couple of decades, particularly in the municipality of Sesto San Giovanni. The shopping mall now has a completely new image, which the new owner, IGD, asked big Milanese studio Lombardini22 to create.
When IGD bought Centro Sarca in 2006, big shopping malls were declining in popularity in Italy, forcing their owners to acknowledge the transformation in consumption underway and the need to focus on the value of architecture as an experiential space. Understanding how a building can have a major influence on public response was a decisive step in turning the trend around.
IGD asked Lombardini22 to perform a structural, architectural and commercial restyling which completely transformed the mall’s image, both inside and out, in terms of its overall appearance (outer walls and landscaping), atmosphere and internal finishes, and graphic identity.
The building’s overall look was transformed from a hi-tech style featuring metal, plastic and glass surfaces into a composition broken down into distinct parts, separate but not independent, according to the new concept of retail space as hospitable. Volumes were reconstructed to create a high-impact, easily recognisable architectural whole. There is a great focus on use of colour, chosen to create an image of domesticity and nature, in a bold contrast with the coldness of the original hues which is particularly effective inside the building.
To establish the architectural unity of the parts, Lombardini22 superimposed a façade made of vertical panels, like adjustable strips, over the building to create a discontinuous sequence of colours in contrast with the building’s superior formal unity. Reds, blues and whites, the colours of the new façades, which are marked by the vertical rhythm of the panels and the horizontal tracks on the structure, convey an idea of dynamism and modernity without being cold and hostile, as buildings of this kind have often been in the past. The better quality of the architectural space was intended to reflect acceptance of responsibility to the city around it, translating into a series of initiatives in the space outside: landscaping and planting of native species, creation of a cycling path connected with the local circuit, and installation of covered bike racks.
This openness to the city of the architectural volume, which serves as a beacon, is matched by the great care taken in requalifying indoor spaces, particularly the three plazas which are more or less open to the sky and naturally lit, acting as flow aggregators.
And so pillars become gigantic lilies and create a fairy-tale-like spring landscape in plaza A, while an enormous bunch of grapes (in which every single grape is an opaline light fixture) extends down into the centre of the funnel in plaza B, symbolising autumn.
Plaza C, with its new floor and seating arising out of it, is a place for stopping to rest, meet people and talk. And so, on the underground level, strips of recycled wood cover the walls, white and green alternate in a reference to the natural environment, and warm flush lighting and fresh, clear graphics express the philosophy of hospitality shared by all parts of the centre.
Centro Sarca obtained BREEAM environmental certification, one of the most important and widely recognised international standards for environmental sustainability of buildings, characterised by a particular focus on the overall improvement in users’ well-being. 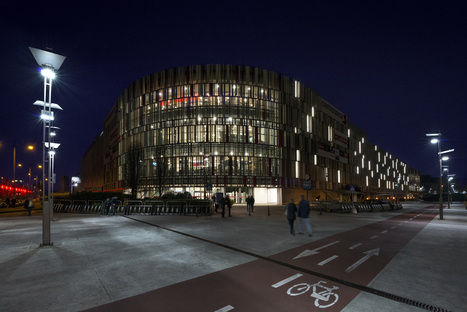 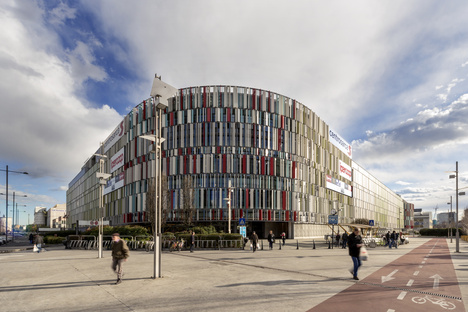 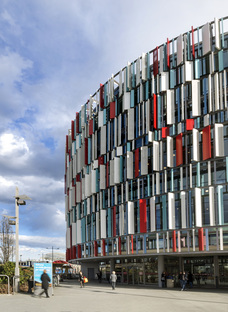 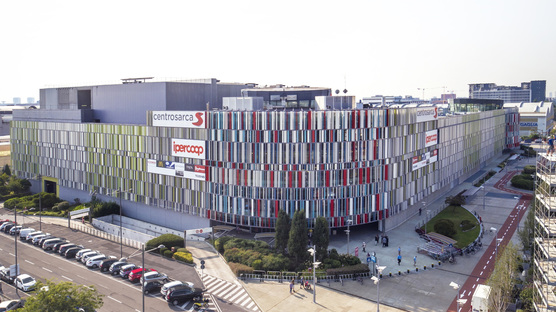 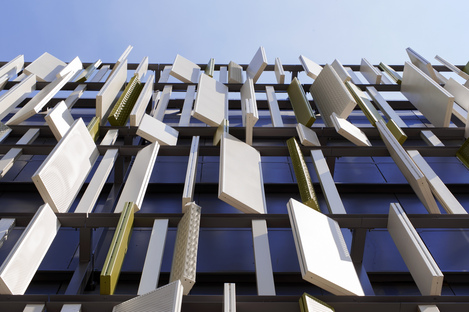 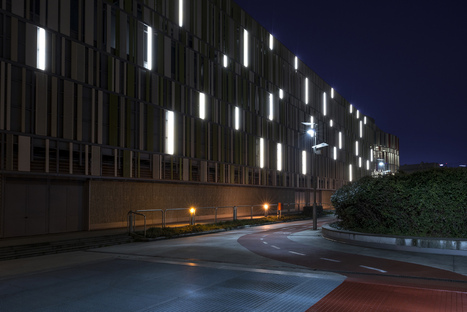 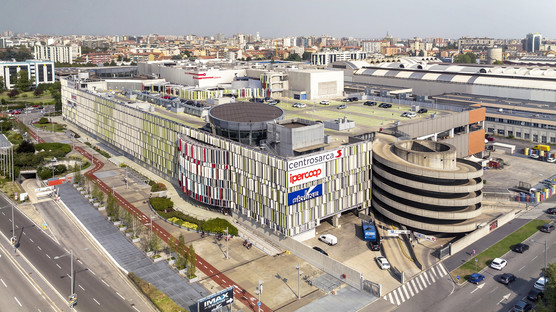 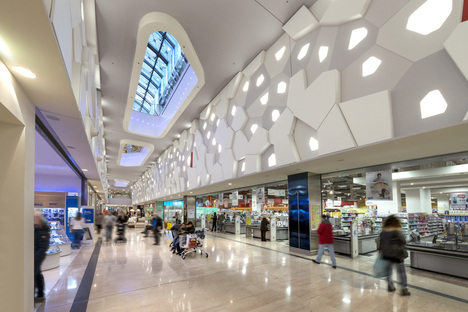 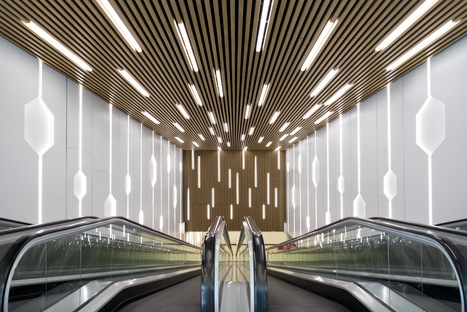 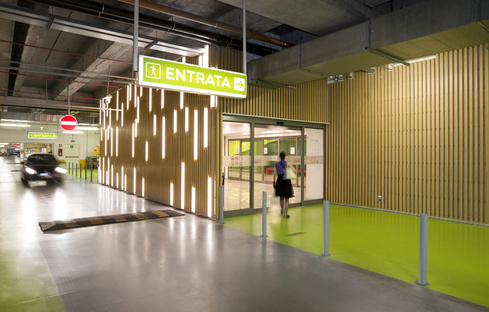 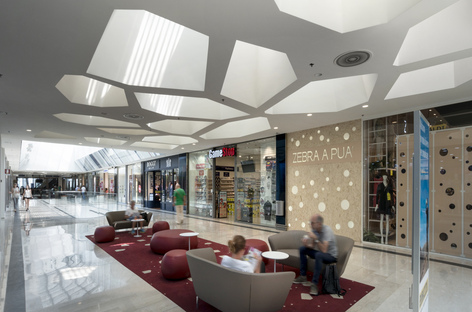 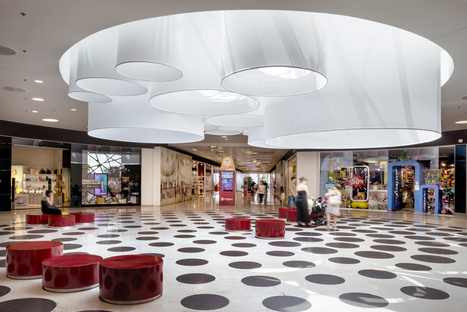 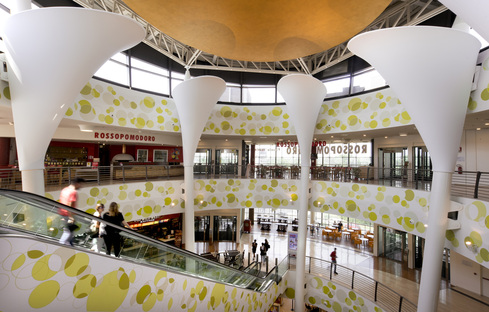 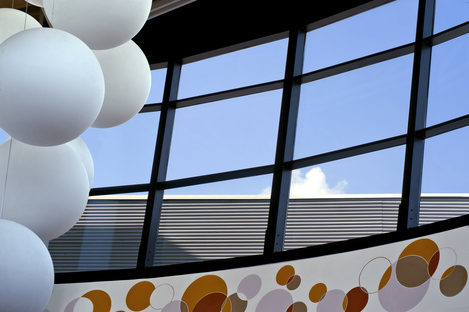 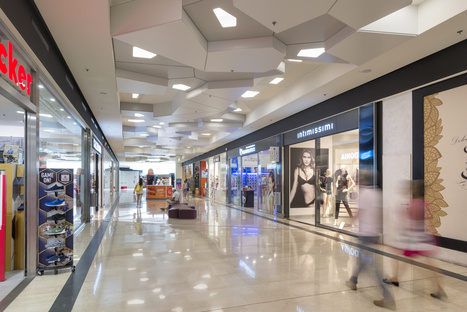 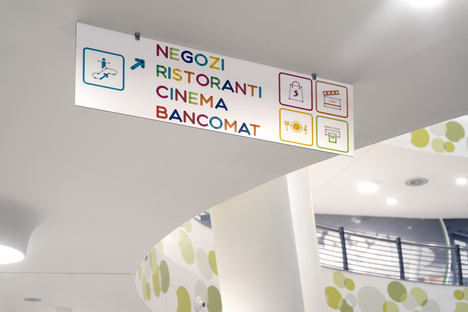