L22 Retail, the Lombardini22 Group’s business unit, participated in the renovation of the main façade of the Valmontone Outlet mall and the creation of a food court. The Valmontone Outlet project represented an opportunity to reflect on the recent transformation of shopping malls. 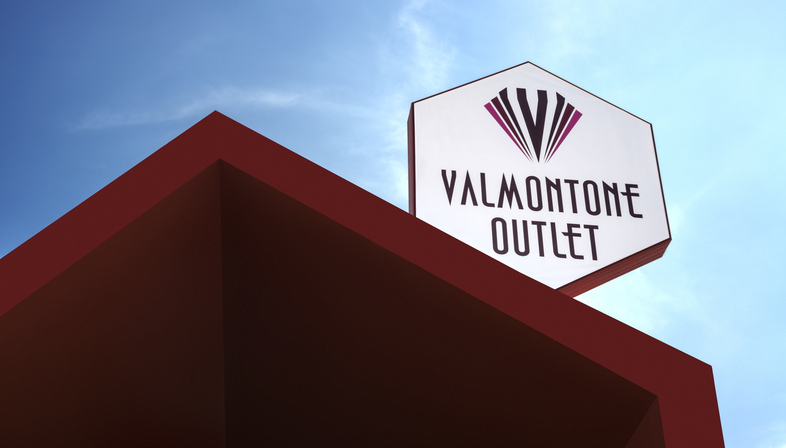 About fifty kilometres from Rome, Valmontone Outlet is one of Italy’s most important outlet malls. In 2016 it was given a new entrance portal and a food court designed by Lombardini22.
Deutsche Asset & Wealth Management commissioned one of Italy’s most successful designers of large-scale commercial spaces to redesign the outlet village’s spaces and image. Under the direction of architect Adolfo Suarez, L22 Retail, the Lombardini22 Group’s business unit, has been studying the transformation of large retail centres for many years with the involvement of experts in architecture, sociology and semiology, reconciling the new ideas with economic, marketing and communications systems.
Valmontone Outlet needed a new “face” with which to initiate dialogue with the general public, now established as soon as people driving by on the motorway spot the shopping centre. The outlet mall, like the major road running alongside it, is a place of transit, but its new image is carefully designed to convey a welcoming, home-like atmosphere, slowing people down and encouraging them to enjoy their time there. The concept underlining the architecture of the Valmontone Outlet is that of an Italian village, with its low houses with gabled roofs and walls in different colours. The same model also served in the design of the new main entrance to the northwest, introducing shoppers to the fashion district by way of the food court.
The wall designed by Lombardini22 is inspired by the archetype of the village, expressed on the basis of a visual horizon composed of a succession of shapes recalling houses. The easily recognisable profile of the roofs establishes a familiarity with the space and the place that is underlined by the choice of colour. Every house has a different colour, a different shade of red, blue or yellow: primary colours, the colour palette that children use, once again in an attempt to create a feeling of familiarity.
Eight of the nine archetypical houses are operated by different food brands, while the central house is actually a covered passageway to the main mall, where the food court is located. It is designed to reproduce the streets and squares of an Italian village, with its bars and trattorias with hidden interiors and outdoor tables. All the restaurants and cafés in the food court have an outdoor area right on the main mall, a space of their own identified by wooden flooring and shade covers, partly solid and partly made of glass.
Valmontone Outlet won a Certificate of Merit in the Refurbishment category at the first edition of the CNCC Design Awards, a new award presented by the National Council set up to recognise the most virtuous shopping centres in terms of technical features, sustainability and architectural quality. 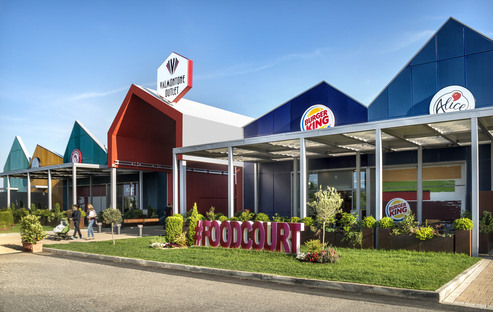 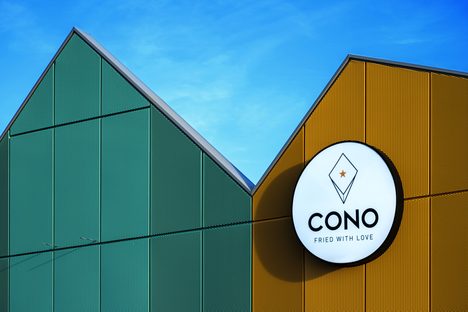 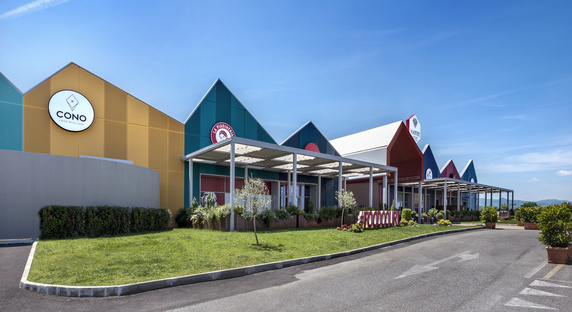 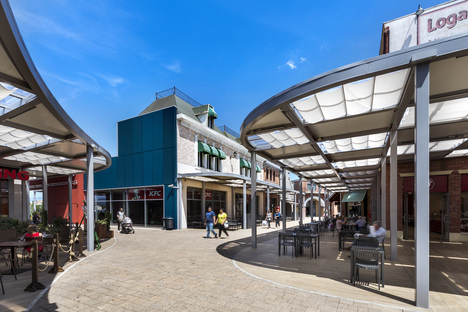 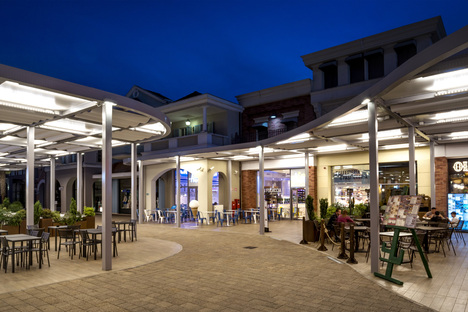 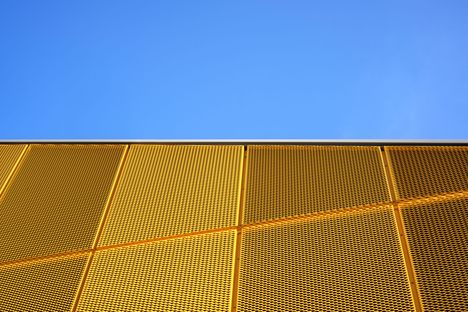 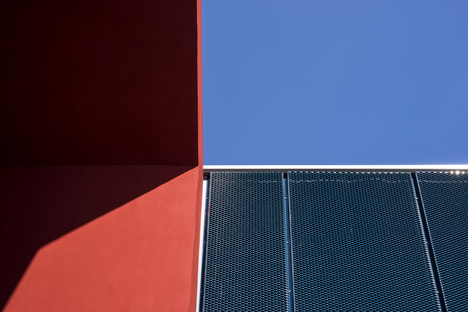 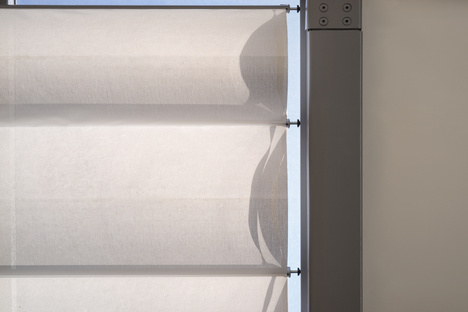 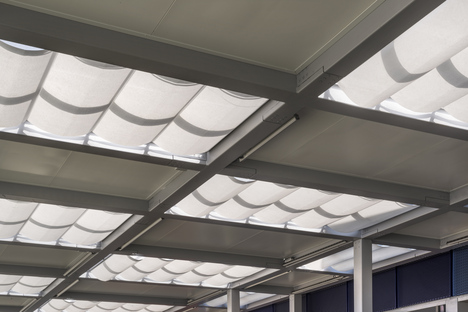 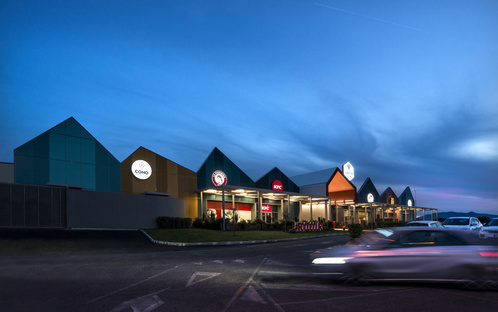 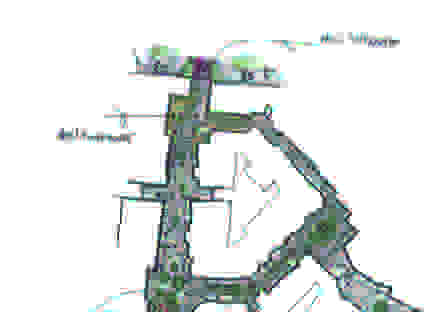 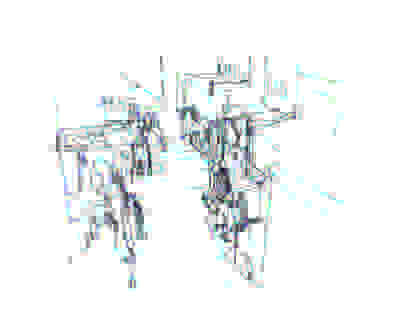 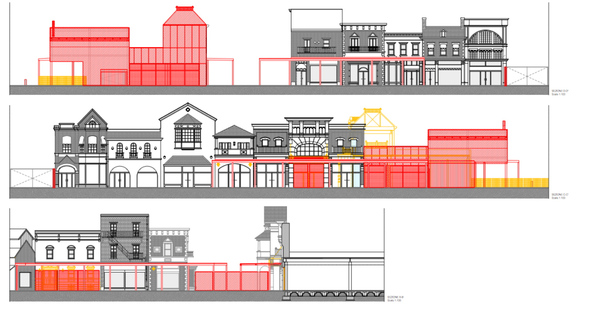