Attention to the project’s surroundings and interpretation of their geometry inspires the Città del Sole urban redevelopment project by Labics.

Labics, a studio founded by architects Maria Claudia Clemente and Francesco Isidori, won the design competition held by the city of Rome for Città del Sole (City of the Sun) in 2007. The project was recently awarded the Sustainable Innovating Project Special Prize of the European Architecture Award 2017. Città del Sole is a multi-purpose development consisting of three buildings with public functions (a library) and private spaces (offices, parking lots, shops and homes). The urban area involved in the project is a triangular lot located between the new Tiburtina railway station designed by ABDR, the district’s public housing projects, Verano Monumental Cemetery and Piazzale delle Province, with the former bus garage run by ATAC (the city’s public transport operator). 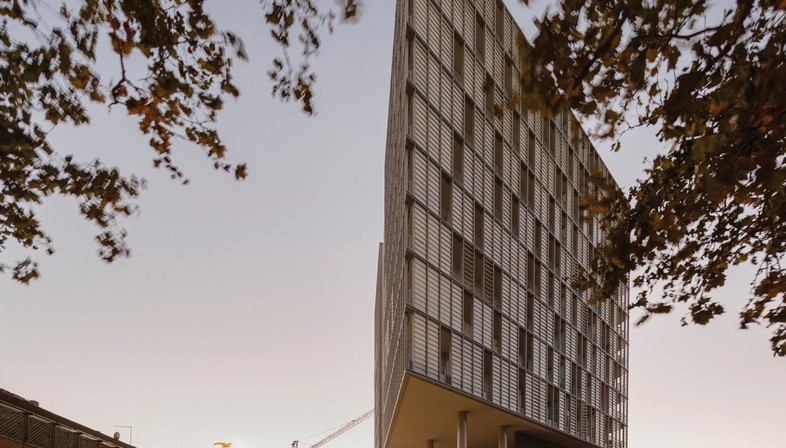 Labics’ starting point for the project was knowledge of the project’s context, interpretation of its geometries and dihedral angles and the relationships between the solids and hollows present in the project. So that, for example, the grid determining the layout of the buildings in the area is generated by extending the main axes of the Tiburtino II district. Labics’ project is a porous system organised and subdivided into a number of different volumes and levels. The library and shops are on the ground floor, the offices and common areas on the first floor. The upper levels contain addition office space and residential units, occupying two of the three buildings in the Città del Sole. The central plaza forms an integral part of the buildings, with its walkways and pedestrian paths serving a true public function, offering a great variety of spatial experiences and places where people can meet, stop to rest or just walk, with unusual views of the early 20th century residential buildings in the neighbourhood.