A new auditorium now stands opposite the Cuernavaca archaeological site. The winners of a competition on invitation, Mexican studios Isaac Broid and PRODUCTORA, built the Teopanzolco Cultural Centre to be an ambitious meeting-place between the town centre and the suburbs. 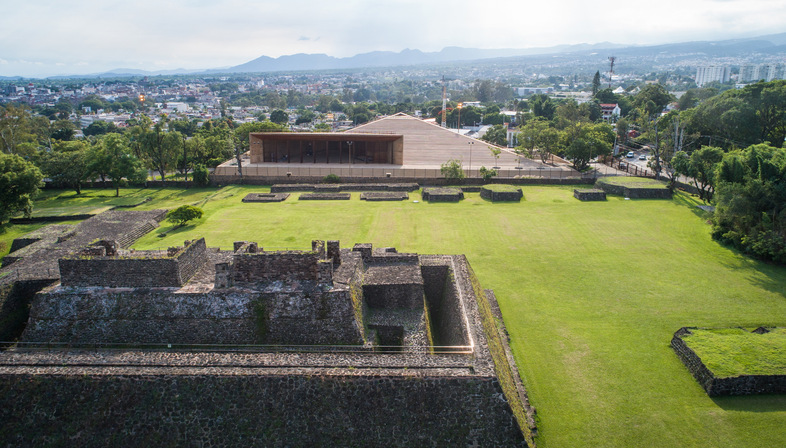 In 2014 the government of the state of Morelos (Mexico) held a competition on invitation for construction of a new cultural centre to replace an old auditorium by the Teopanzolco archaeological site in Cuernavaca. The all-Mexican team of Isaac Broid and PRODUCTORA won the contest with a project expressing great pride in a political programme that finally treats culture as a tool for achieving social progress. Art as a vehicle for integration is the manifesto of what is now the Teopanzolco Cultural Centre, a complex for theatre, performances and music in an area where a poor, disadvantaged neighbourhood borders on clusters of luxurious residential districts.
The progress of the arts in the past decade in the town of Cuernavaca had until now been reserved for the élite, failing to reach the disadvantaged social classes, which had no easily accessible, nearby community centres. The construction of a cultural centre in place of a simple auditorium expresses the government’s wide-ranging cultural programme contemplating both learning and entertainment, in which architecture plays a symbolic role.
The first dialogue the project needed to address was its interaction with the historic Aztec site on the spot, dating back to the 13th century (though the latest new discoveries following the 2017 earthquake suggest it may be even older), to the west of which the new auditorium was to be built. Experts say there may be further artefacts hidden under the buildings constructed in the city over the centuries, and are continuing to excavate to the south of the site, but on the basis of its present appearance, the square site centres around the Great Pyramid. Only a partially underground portion of this ancient place of worship remains today, surrounded by a series of altars, probably dedicated to lesser divinities. The construction of this monument of funerary archaeology inspires Isaac Broid and PRODUCTORA’s project, a complex with a triangular layout built out of coloured concrete inspired by the overlapping stone of the Aztec monument. The new building is not only constructed on the same scale as the Great Pyramid, it is opposite to it, and the axis of its main entrance is aligned with the axis of the pyramid. The triangular hall containing the box office and coffee shop leads to a second triangle, enlarging the first, containing the auditorium hall, including the seating, the stage, the backstage area and all the technical utility spaces required. This upper block is completed by a concrete base similar to the first one, but larger, forming a near-complete rectangle containing the operation zones (dressing rooms, storage space, offices, even a black box theatre), topped with a number of esplanades offering views over the city and the archaeological site. Transformed into a city park by a series of open patios with tall trees, the site offers a number of different points of contact between inside and outside, allowing visitors to experience different perspectives, thanks to long staircases alternating with more intimate corners. On the northern side is the surprise, a second “auditorium”, a majestic outdoor space designed as an extension of the stepped ramp of the roof over the first auditorium, offering visitors an unrivalled view of the entire archaeological site. These planes descend in opposite directions to create a visual interplay of inclined planes that continues all the way down to the base, creating solids and hollows with the treed patios and the staircases.
This imposing construction is made entirely of bare concrete, in which the horizontal orientation of the formworks impressed on the surfaces and the earthy colour of the walls, steps and planes looks like a modern version of the archaeological structures across from it. The timber-clad interior of the auditorium and the hall, like the sequence of cor-ten doors at the main entrance, confirm that the materials provide a link between the scale of the architectural past and present, suggesting links between the contemporary cultural construction and the presence of the past. 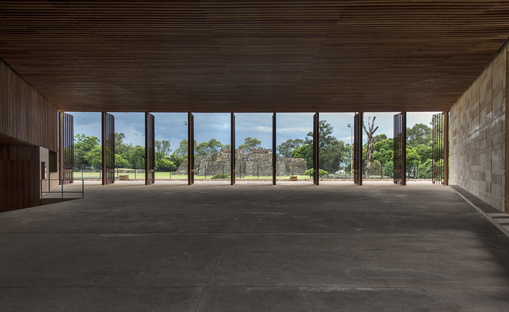 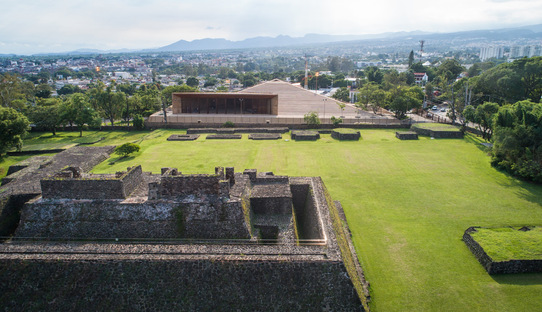 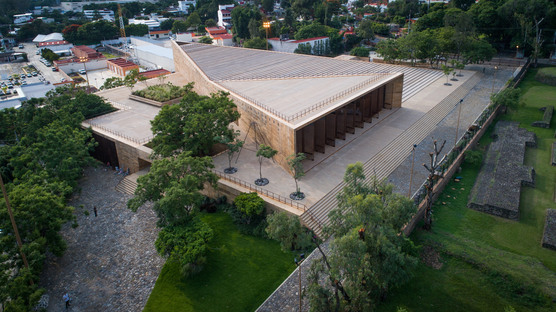 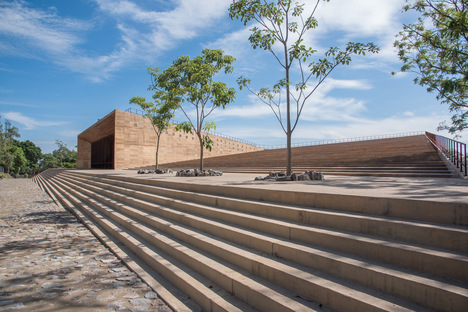 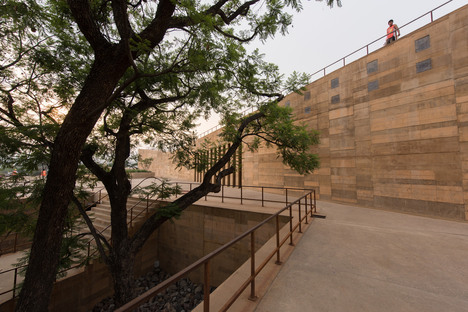 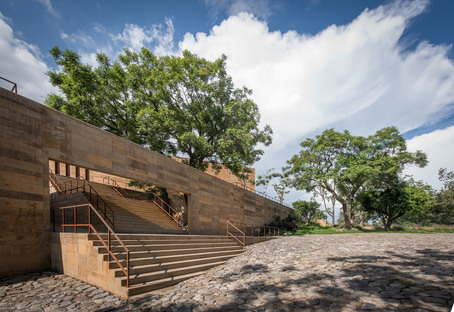 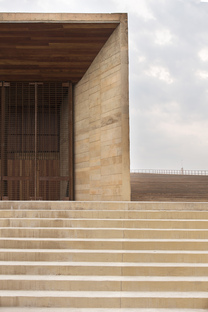 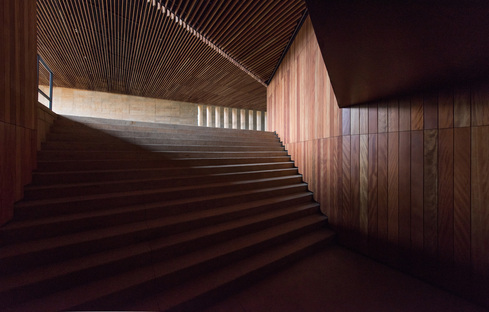 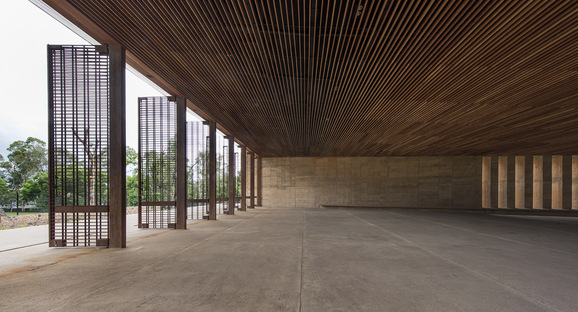 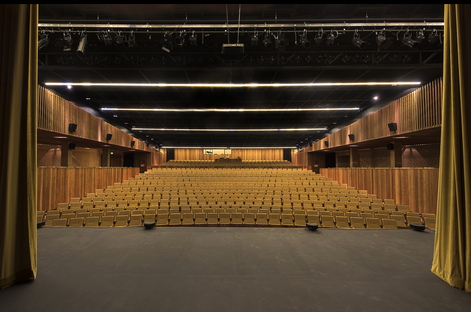 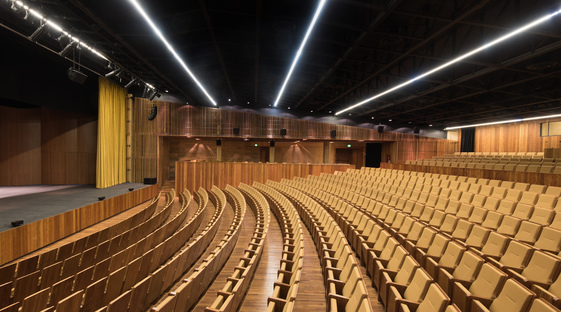 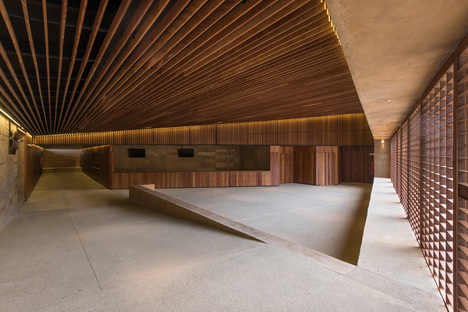 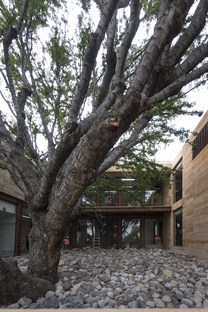 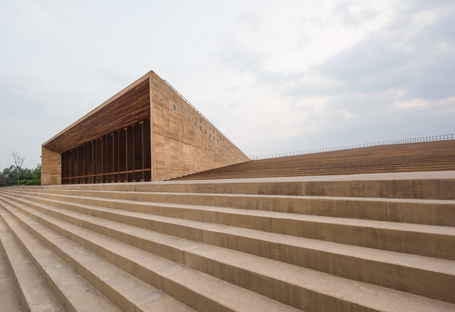 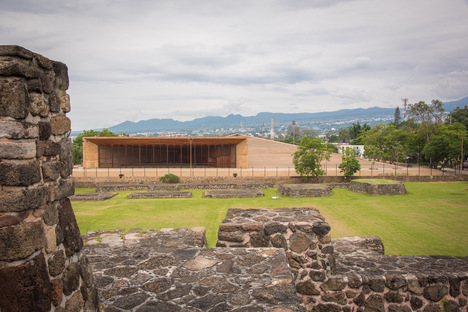 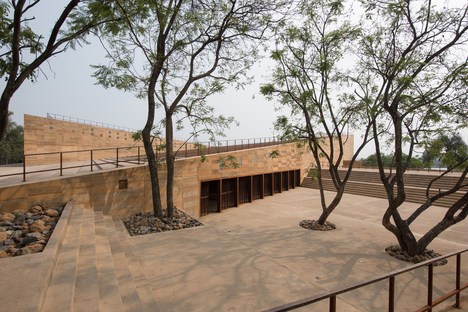 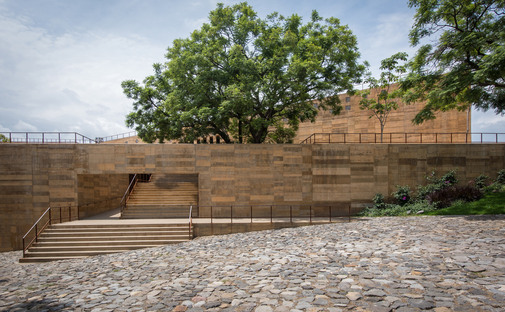 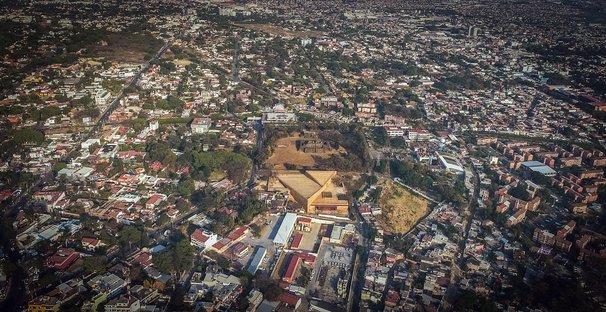 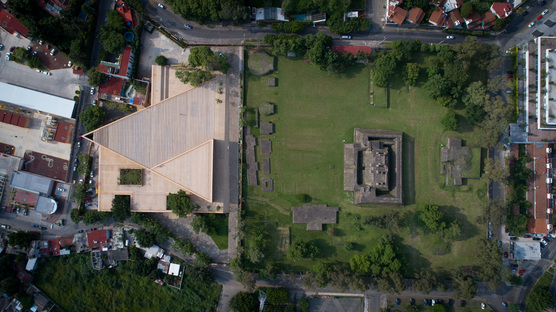 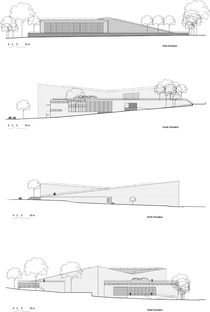 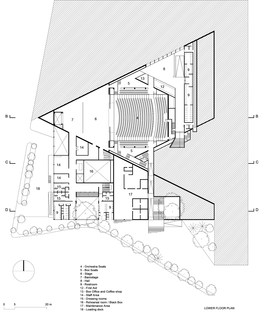 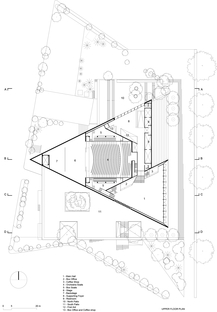 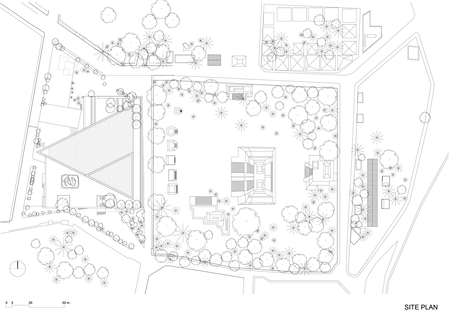 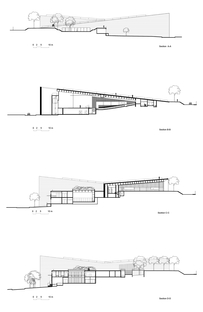