Herzog & De Meuron’s Elbphilharmonie, opened on January 11, 2017 after a lengthy and controversial construction process, is the new symbol of the city of Hamburg. Standing in Sandtorhafen harbour, a Unesco World Heritage Site, the Elbphilharmonie contains three concert halls and a raised plaza with panoramic view of Hamburg. 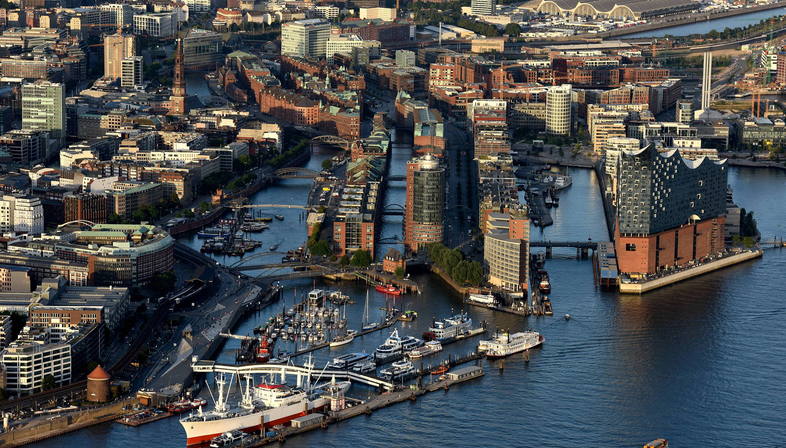 Hamburg has a new plaza, 37 metres above the city in the long-awaited Elbphilharmonie by Herzog & De Meuron. The project is highly controversial, both because work had been underway on Herzog & De Meuron’s project, inaugurated in January 2017, since 2003, and because of the cost to the municipality of Hamburg, which was well over budget, causing the work to be suspended in 2011. But it is also undeniably a landmark, making Hamburg one of Europe’s liveliest cities, with three concert halls in the centre of the complex plus a hotel, private apartments and, above all, a raised, covered public plaza measuring more than 4000 square metres, surrounded by a terrace with all-round views of Hamburg.
Herzog & De Meuron think of the Elbphilharmonie building as a bridge between the city’s past and its future, starting with its location in the Sandtorhafen harbour basin, and specifically on the site of the oldest warehouse in the Hamburg Docks, Kaiserspeicher A. Which is in turn the heir to a history of great significance for the city: built in 1875, it soon came to symbolise Hamburg’s rise to a position of importance in international trade. The second world war did not spare the neogothic building, and its ruins were demolished in 1963 so that the Kaiserspeicher A could be rebuilt three years later, still as a warehouse, with the appearance preserved today in the Elbphilharmonie.
During construction of the philharmonic hall, the old warehouse was emptied out while preserving its brick perimeter walls and building a second, contrasting volume, completely covered in glass, on top of it. The curved panels form a tent-like roof with a startling suspended appearance, as if this whole portion of the building were wrapped in a soft, translucent surface like the curtain across a stage, about to be drawn back.
Solidity and lightness, permanence and temporariness are the contrasting words that come to mind upon observing the dialogue-like nature of the architectural project, in which the old and the new come together in perfect continuity. In actual fact this dichotomy between the two blocks of the building conceals what the architects call one of the most interesting structural challenges of our times, the uncoupling of the brick base from the volume above it, which contains one of the world’s largest auditoriums, to ensure perfect acoustic insulation.
The concert hall is built in “vineyard style” (first used by Hans Scharoun in the Berlin Philharmonic), in which the seats of the audience surround the stage and rise step by step, like a terraced vineyard, with special acoustic insulation known as White Skin, developed specifically for the project by Yasuhisa Toyota. 10,000 chalk fibre panels weighing 12,500 tonnes, milled in three dimensions on the basis of calculations aimed at obtaining an acoustically optimal surface, are each modelled and oriented differently and set side by side with such precision that they make the walls look as though they are covered with a single white coat. To support the total weight of the new philharmonic hall, about 200,000 tonnes, it was necessary to reinforce the 1111 concrete poles supporting the Kaispeicher A with an additional 650 poles to a depth of 15 metres in the Elbe River. And with such impressive numbers, it will come as no surprise that the total cost of the work was 865 million euros.

History of Planning and Realisation
June 2003: »Philharmonie Hamburg« project sketch by architects Herzog & de Meuron including additional buildings (hotel, apartments, parking) on behalf of Alexander Gérard and Dieter Becken
Sept. 2004: The Senate of the Free and Hanseatic City of Hamburg (FHH) awards ReGe Hamburg the
contract for a feasibility study to be completed by May 2005.
Feb. 2005: Pan-European competition announced to search for a private partner for its construction, financing and operation.
July 2005: Based on the feasibility study the senate of FHH votes in favour of the construction of the Elbphilharmonie Hamburg.
Autumn 2006: Planning application submitted.
Feb. 2007: Hamburg City government unanimously votes in favour of construction of the Elbphilharmonie (proportion of costs for the City of Hamburg: 272 Million Euro)
Apr. 2007: Building commences.
Nov. 2008: Both parties agree to a settlement. Costs for the City of Hamburg increase to 495 Million Euro.
May 2010: Topping-out ceremony
Nov. 2011: Almost complete suspension of construction work by Hochtief
Apr. 2013: After negotiations with the project partners, the City of Hamburg decides upon a restructuring of the project after which construction work is fully resumed. The restructuring agreement stipulates among other points:
- Additional responsibilities assigned to Hochtief: Assumption of all risks related to planning and construction, participation in a newly founded consortium with the architects, guaranteed meeting of quality requirements from the architects and the acoustician Yasuhisa Toyota, contractually guaranteed intermediate deadlines, and a binding date of completion
- A new construction schedule: Handover of the concert venue areas by 30 June 2016, final inspection and acceptance of the Elbphilharmonie by 31 October 2016
- Additional costs for the City of Hamburg: 256.65 Million Euro for the additional services executed by Hochtief and the architects and including, amongst others, costs for taxes and interest. Proportion of total costs for the City of Hamburg: 789 Million Euro.
July 2013: Resumption of construction work
Sept. 2013: Completion of 3D planning for the technical centre on the roof
Nov. 2013: Completion of the building shell
Dec. 2013: Installation of the White Skin begins
Jan. 2014: Installation of the final element of the glass facade
March 2014: Removal of the two tower cranes and installation of two rooftop cranes
Spring 2014: Start of interior finishing work on the Plaza (Plaza tube, wind deflectors, ceilings and floors)
May 2014: Completion of the element facade
Aug. 2014: Completion of the roof, which is now sealed and rainproof
Sept. 2014: Completed installation of nearly one third of the White Skin on the ceiling of the Grand Hall.
Jan. 2015: Completed installation of the White Skin and the reflector on the ceiling of the Grand Hall. The renovation of the exterior facade of the red brick warehouse is finished.
Apr. 2015: Completion of the technical area in the Grand Hall.
June 2015: The project partners present the construction status of the Plaza to the press.
Jan. 2016: The Hamburg Senate secures the basis for artistic operations of the Elbphilharmonie.
Feb. 2016: The complete White Skin in the Grand Hall is presented to the press. 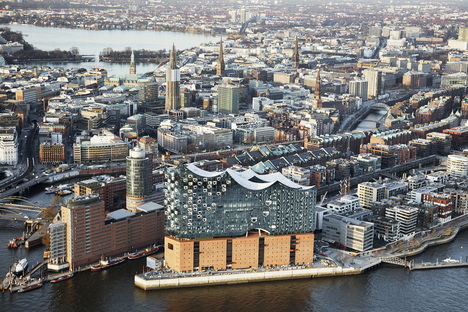 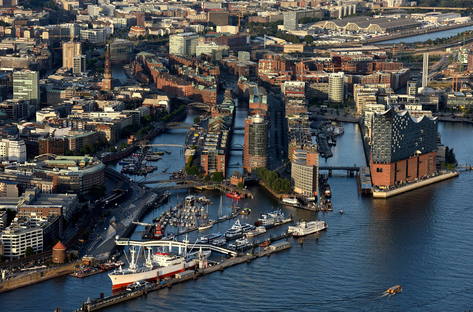 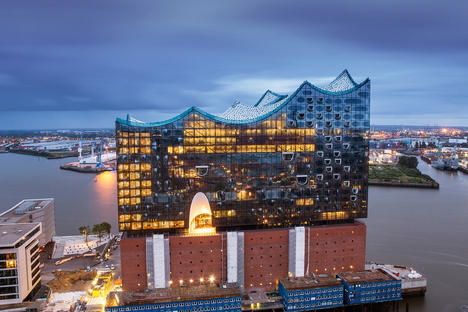 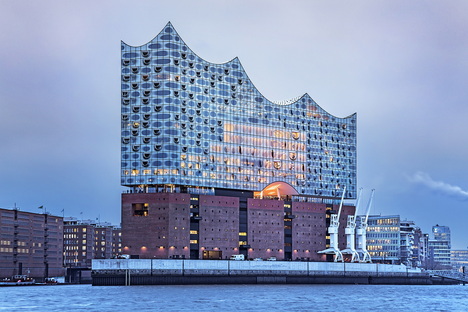 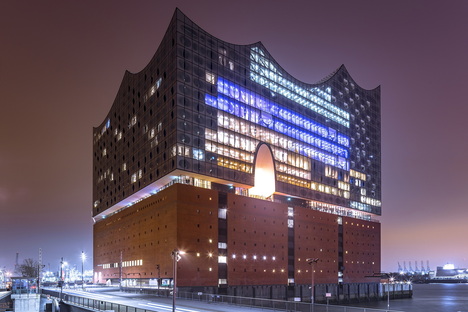 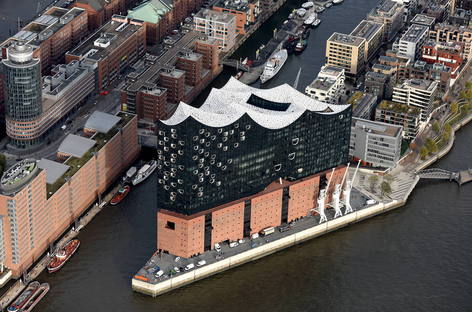 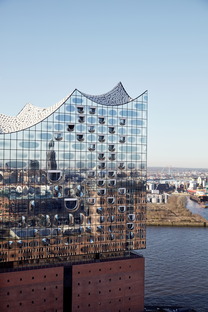 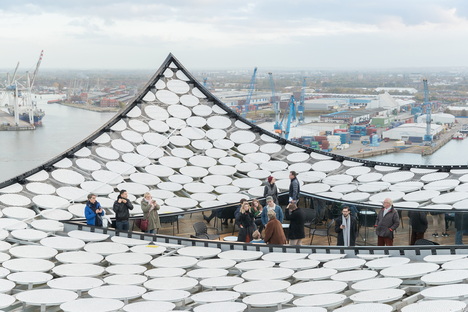 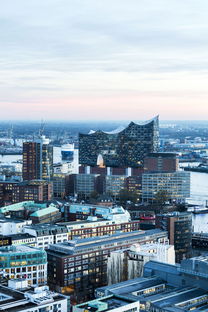 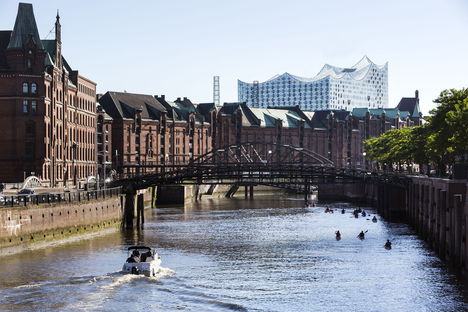 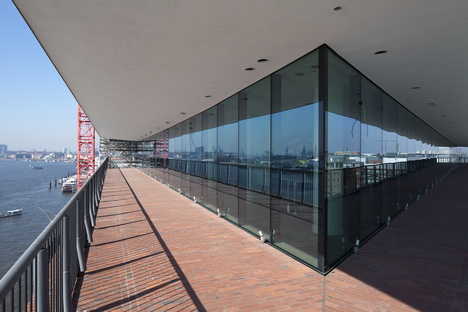 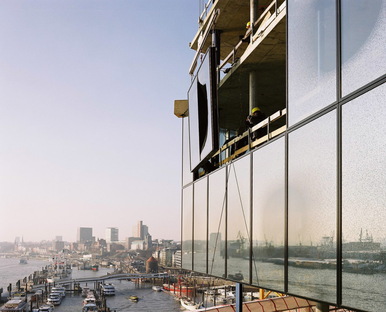 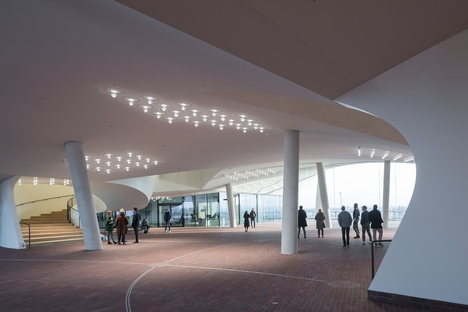 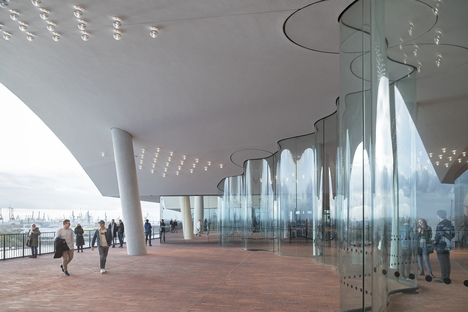 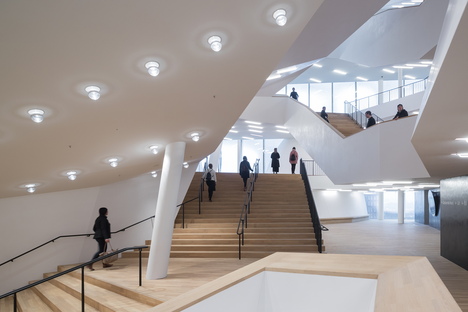 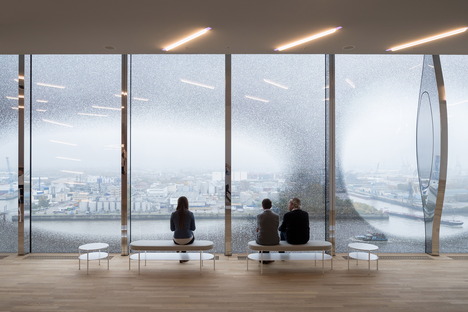 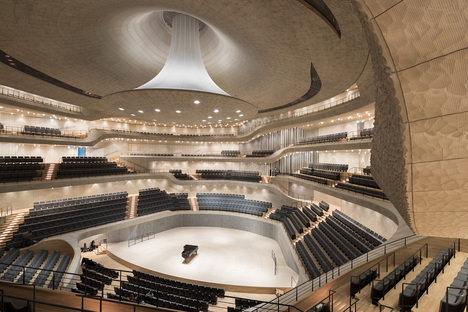 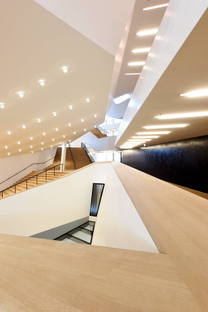 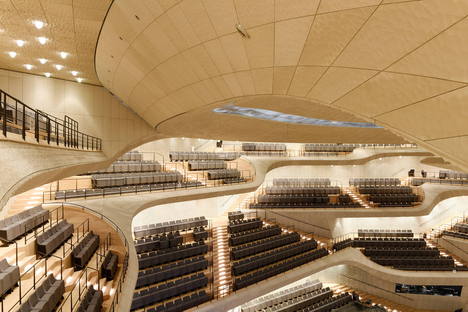 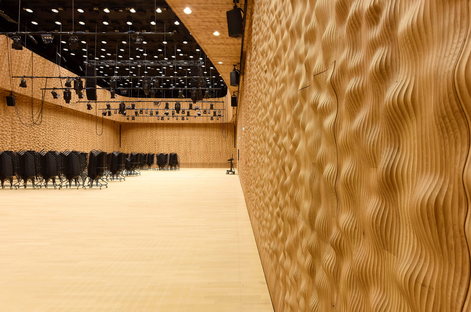 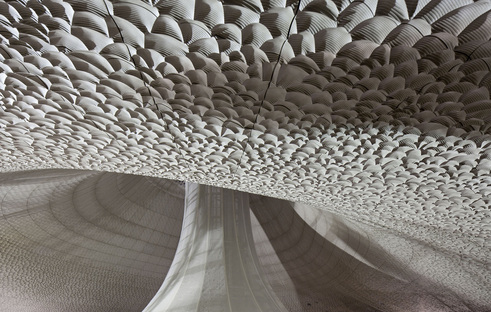 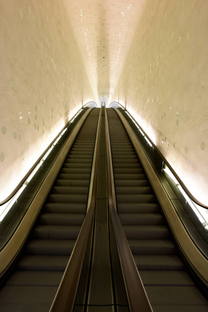 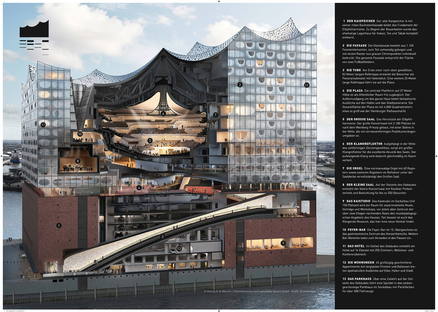 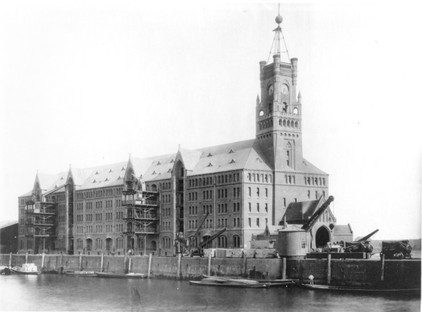 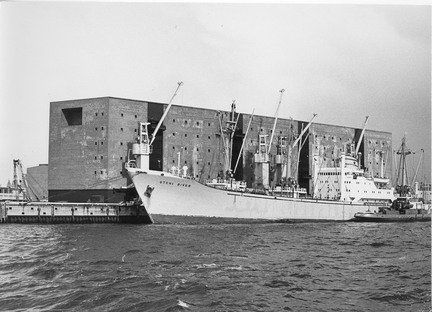 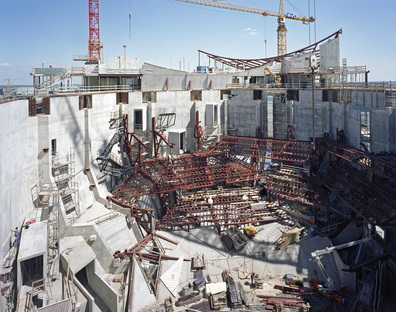 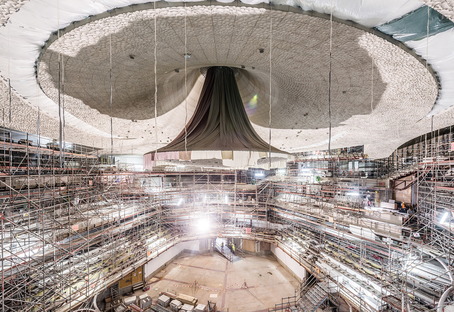