By expanding Unterlinden Museum in Colmar, Herzog & de Meuron make space for the museum’s modern art collections and for temporary exhibitions. The city of Colmar obtains the reopening of the Sinn canal and the new Unterlinden Square through a project that establishes continuity with the forms and proportions of the historic Unterlinden Museum. 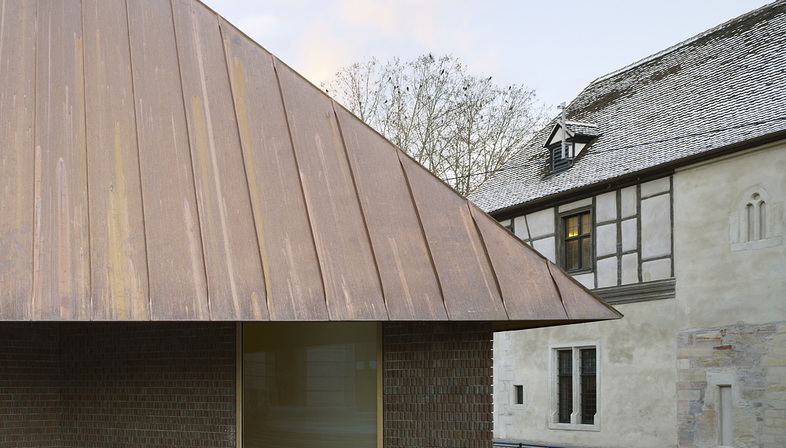 Jacques Herzog & Pierre de Meuron designed an expansion for the Unterlinden Museum in Colmar, Alsace with the aim of connecting the past and present and creating a new square between the old and new museum buildings, Unterlinden Square. Founded in the mid-nineteenth century in the former convent of the Dominican Sisters, Unterlinden Museum is primarily known for its artworks dating from various different ages, particularly Matthias Grünewald’s Isenheim Altarpiece. After about 150 years exhibiting ancient art and artefacts, the museum was expanded by Herzog & de Meuron to contain modern art and temporary exhibitions in a new architectural and urban whole.

The contemporary project completes a second architectural block mirroring the historic building and built in proportion to it, in relation to the Sinn Canal, which runs under the city of Colmar and is re-opened in this project to create a focus of public interest in the city plan. The restored façade of the medieval convent buildings containing the entrance to the museum, with its admirable Gothic cloister and the chapel of St Johann unter der Linde (which gives the museum its name) stands on one side of the canal, with the old city baths building ("La Piscine”) and Herzog & de Meuron’s new volume, set against the baths to form a T shape, with a big wall enclosing the area and linking it with the canal, facing it on the other bank. Here, in the new Unterlinden Square, the architects have built a second sign of the museum’s presence, a little maison recalling the old mill that used to stand on the site, now transformed into a viewpoint with big windows over the square from which visitors may observe the underground exhibition gallery created to link the new wing with the old wing of Unterlinden Museum.
The shape and volume of the Ackerhof, the new building next to the old public baths, is inspired by the chapel of St Johann unter der Linde, which stands in the same position on the opposite side of the site. Its gabled roof and exceptional height, 11.5 metres, create an impressive exhibition space with spatial features very like those of the Chapel, reflected in doors and windows of Gothic shape.
With its exhibition halls for 19th and 20th century art, the Ackerhof is joined to the old city baths, which now contain the museum’s administrative offices, a library, a coffee shop and Colmar’s tourist information office. The resulting courtyard, surrounded by a brick wall that continues in the little maison and picks up on the theme of the bricks of the chapel, recalls the convent cloister, the difference being that here lay spirituality has placed an orchard of apple trees, planted in orderly rows in the pavement of stone and brick.

The little maison invites passers-by to visit the new wing of the Ackerhof, which uses the same formal vocabulary as it: the copper roof, brick walls, extreme cleanliness of form, big inclined surfaces, and the Gothic severity of the existing complex. 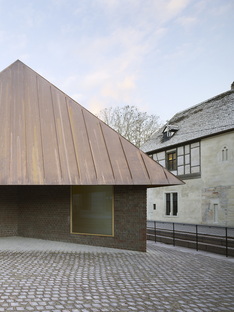 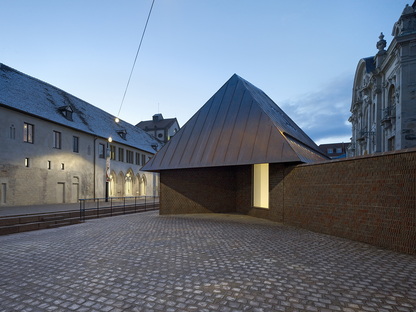 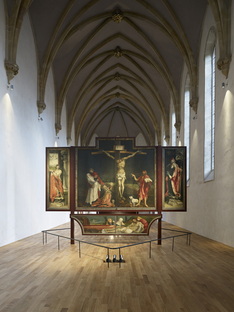 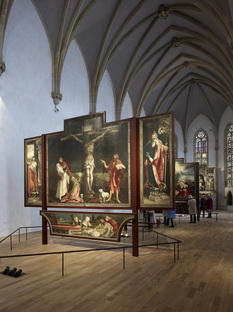 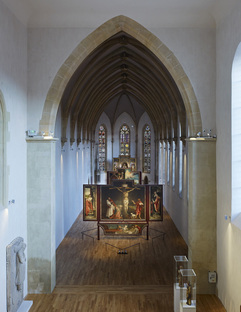 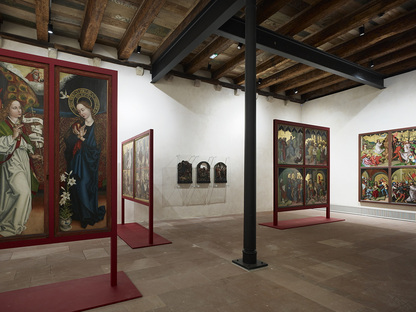 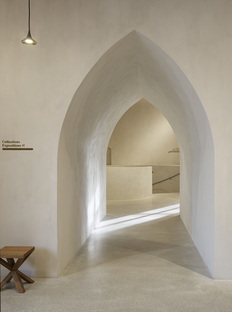 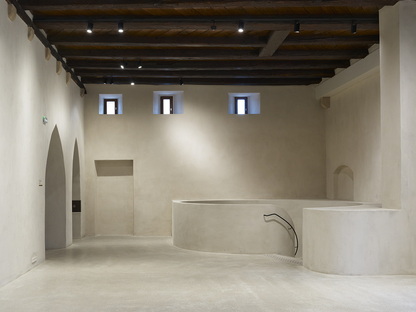 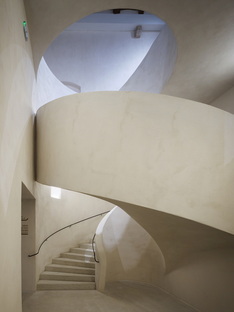 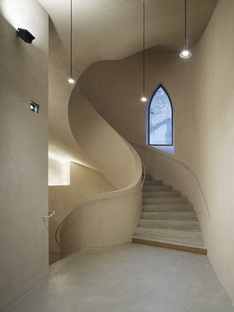 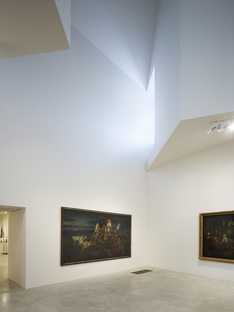 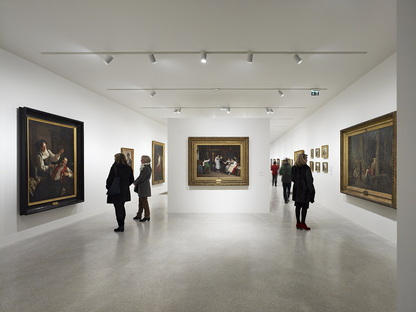 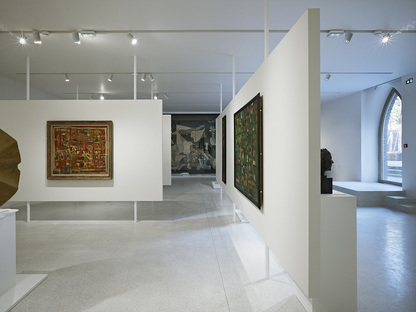 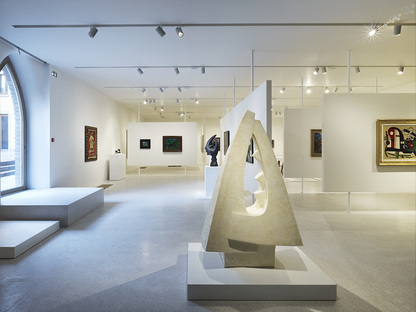 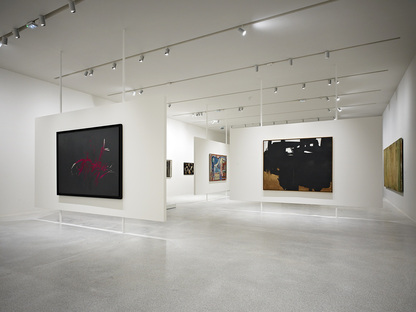 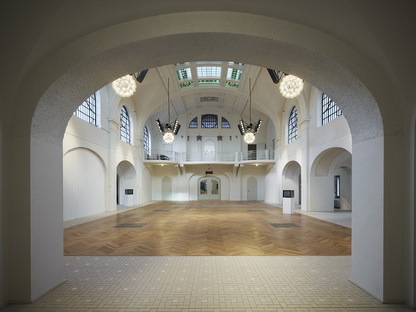 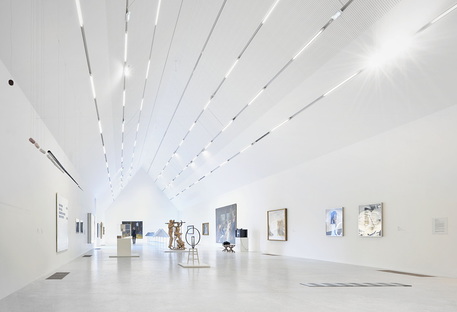 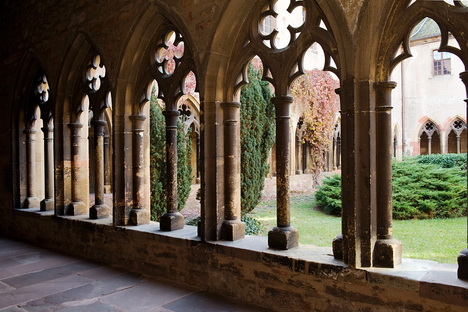 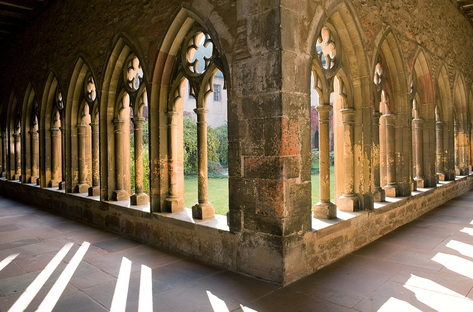 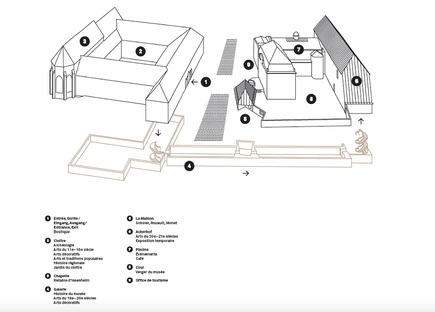