The new conference center, designed by gmp architects practice, was completed at the end of July in Xi’an. More than 3100 years old, this ancient Chinese city is located at the easternmost point of the ancient Silk Road. The practice founded by architects von Gerkan, Marg and Partners won the 2017 competition to design the conference center which, together with their design for a dedicated Silk Road exhibition center, form a trade and industry hub in the province of Shaanxi. Designed by gmp architecture practice, the Silk Road International Conference Center in Xi’an, China has recently been completed. The practice, comprising von Gerkan, Marg and Partners, took first place in the 2017 design competition. The new conference center, together with the “Silk Road International Exhibition Center”, designed by gmp, form an important hub for trade and industry throughout the entire province of Shaanxi.
Xi’an, the province’s capital, is one of the oldest cities in China. Over 3100 years old, it was the seat of the Zhou, Qin, Han and Tang dynasties. Surrounding the city are archaeological sites containing the famous Terracotta Army, a symbolic army comprising thousands of life-size terracotta statues, buried to serve the first Chinese Emperor Qin Shi Huang in the afterlife. The name of the conference center pays tribute to the Silk Road because Xi’an was the easternmost point of that ancient route. Today it is the largest, most developed city in the center of north-west China and one of the most populated Chinese cities, hence the need for an equally important conference center.
The new complex is located on the eastern part of the site and occupies a total area of 128,000 square meters. It is the largest integrated conference center in north-west China and offers conference, exhibition and multi-purpose facilities for international forums and events in addition to bilateral and multilateral summits.
Based on their long experience and knowledge of traditional Chinese architecture, gained from over 130 projects completed in China and more than twenty years working in the country, gmp architects designed a contemporary building which recalls the teachings of Mies van der Rohe but clearly references local traditional architecture. Traditional Chinese architecture can be seen in the symmetrical shape of the roof, proportions of the predominantly horizontal facade and finally the columns surrounding the building, which confer lightness. The 200 meter-long facades feature concave surfaces with half moon-shaped upper and lower parts which interrupt the continuity and monotony of the square structure, and confer dynamism. The result is an elegant, contemporary yet classic building. The curved surfaces begin at first floor level on the glazed facade. Seen from a distance, with the ground floor partially concealed, the building seems to float on the stretch of water which surrounds its basement and steps. Other parts of the construction contribute to this sense of suspension and weightlessness. For example, on the facade, steel columns suspend the lower arch from the roof and reveal the entrance to those approaching the building. At 30 to 40 meters in length and 60cm diameter, they appear like thin wires. This emphasis and lightness is also underlined by the artificial lighting which, in the evening, makes the conference center a landmark for the city of Xi-an. 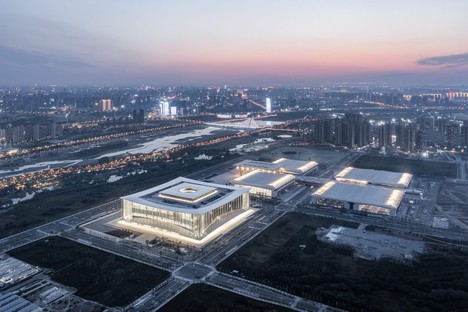 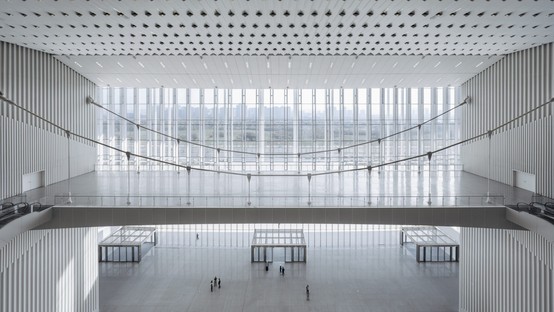 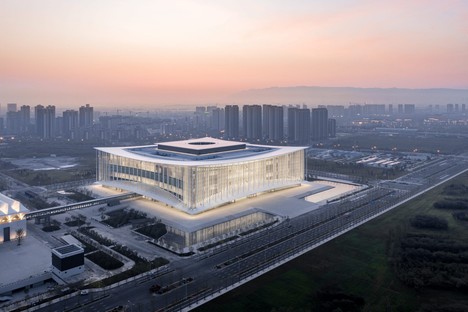 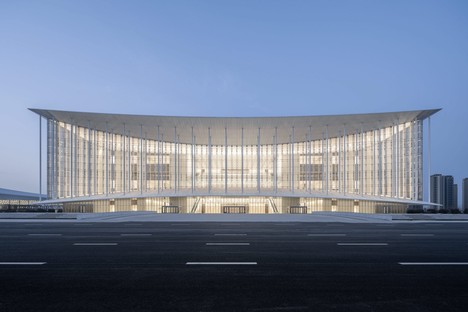