The Giuseppe Tortato Architetti firm designed the restyling project of the Campus Certosa complex in Milan. The goal was to modernise the overall image of the campus, providing the external façades of the main building with a new look, to then proceed with the indoor spaces. For the interior design project, architects completely reorganised the students’ dorms, together with the reception, common and meeting areas, in order to ensure the greater well-being of those who spend time in these spaces. 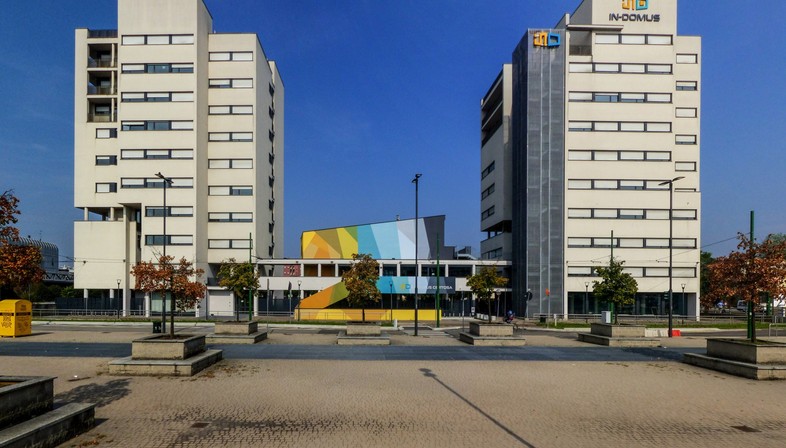 The indoor spaces of the complex reserved for students of the Certosa University Campus in Milan were renewed thanks to the restyling project designed by the Giuseppe Tortato Architetti firm. The Certosa Campus complex is located in the north-western outskirts of Milan, in front of the Milano Certosa station which, like the entire area, takes its name from the nearby Certosa di Garegnano, a former Carthusian monastery. The neighbourhood is a nerve centre of the city thanks to the presence of the railway bypass, to numerous services and to the Politecnico, Milan’s university that encompasses the engineering, architecture and industrial design faculties. The area is a hotspot for university students and the presence of a quality residential complex with spaces where students can meet, study and do sports is therefore a must.
Responding to the client’s needs, the project designed by the Giuseppe Tortato Architetti firm renovated the image of the Certosa Campus complex, creating a much more welcoming space for its various users. Architect Giuseppe Tortato saw the key points from which to start precisely in the common areas intended for hospitality, recreation and conviviality, for a full restyling project of the indoor areas of the complex. 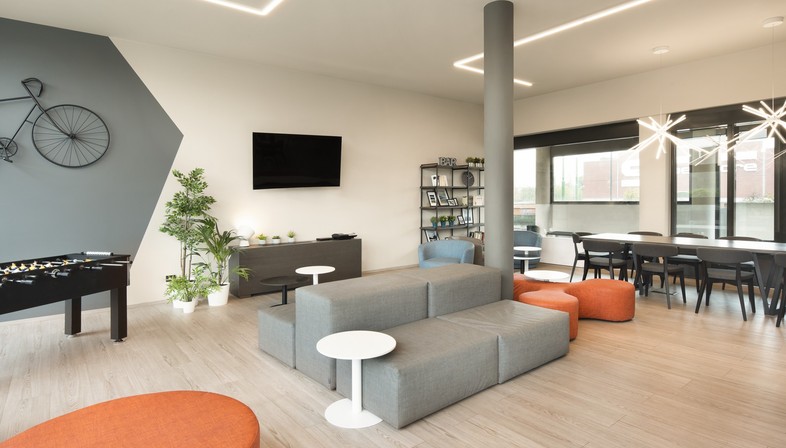 The Campus Certosa complex consists of a central building with two towers, one on each side, originally built in the early 2000s. Architect Giuseppe Tortato completely rethought the organisation of the interior spaces, adapting the central building and the ground floors of the two towers to house all common areas used for social interaction, reception and entertainment. This included the study rooms reserved for guests, the gym area with its large window overlooking the square and the kitchen area.
One of the key objectives of the interior design project was also to ensure greater well-being to those who will live in the spaces designed. For instance, in order to ensure better natural lighting of the rooms and to create new views towards the municipal park, architects had to make changes to the shell of the building.
For the common areas, architects created casual and colourful zones through the use of furnishings with a strong accent on industrial design. Everything contributes to a general sense of movement and elegance, also thanks to a careful and studied use of lighting. The "cluster" distribution of the different elements satisfies the flexibility required of the common areas, creating a welcoming and satisfying space for all guests.
The Residential spaces of the Campus Certosa complex are organised in the two lateral tower buildings. They include single and double rooms, as well as apartments for 2 to 4 students, some also including a kitchen. Architects from the Tortato studio paid close attention to the restyling of these spaces, with a focus on ensuring greater privacy for residents by reorganising the existing and the new furnishings chosen by the client. The main role played by colours in the restyling project designed for the complex is also clear and visible on the outside of the building, which became a sort of geometric rainbow inspired by mural techniques, providing the façades of the central building with a whole new look and highlighting its role as the heart of the structure. 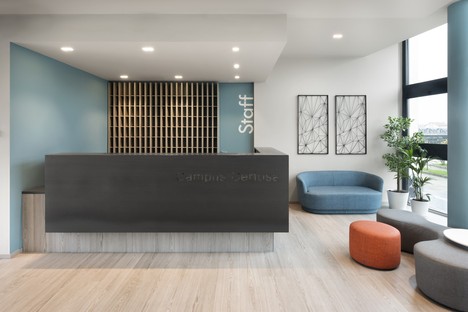 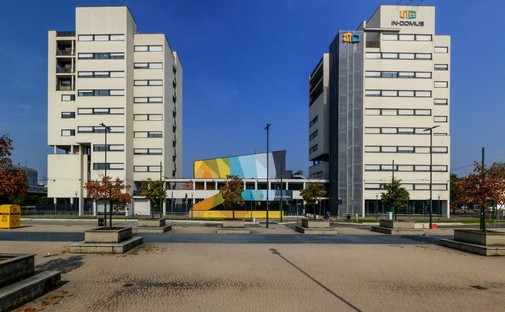 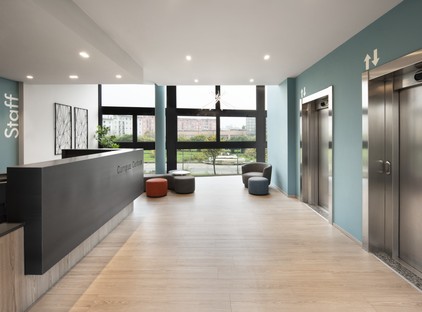 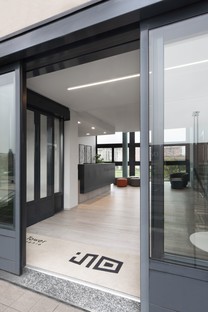 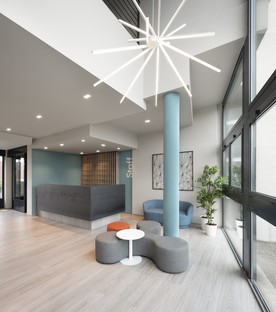 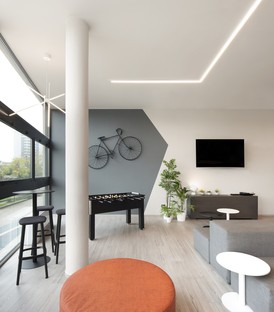 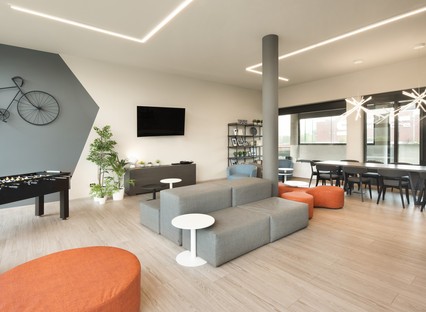 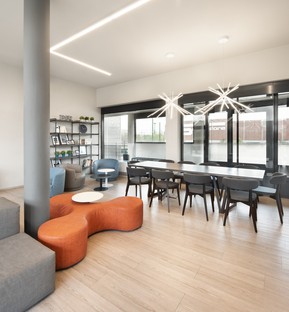 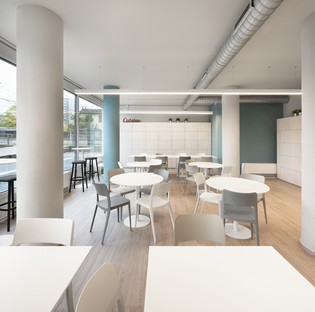 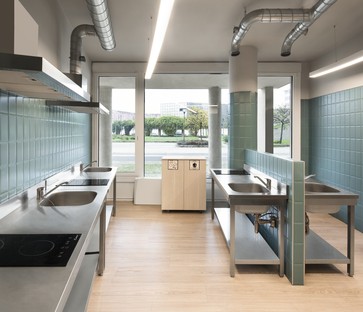 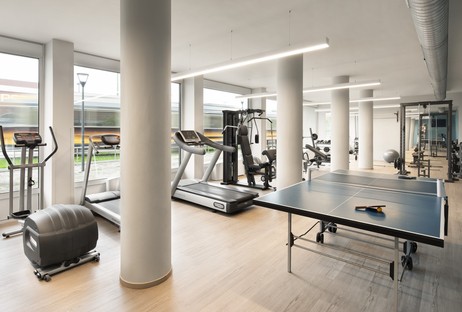 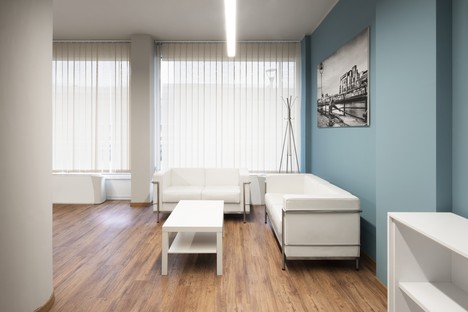 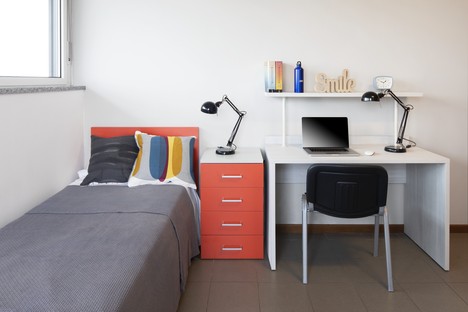 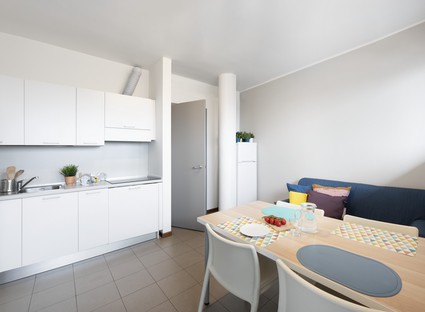 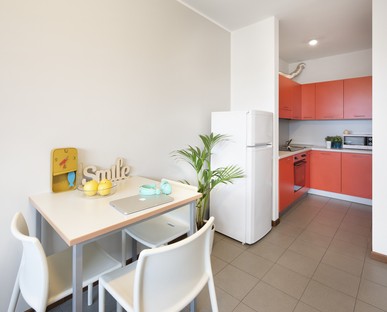 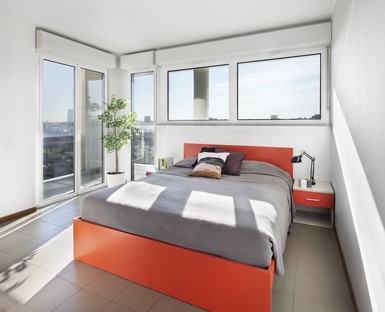 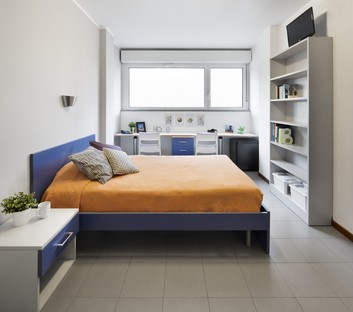 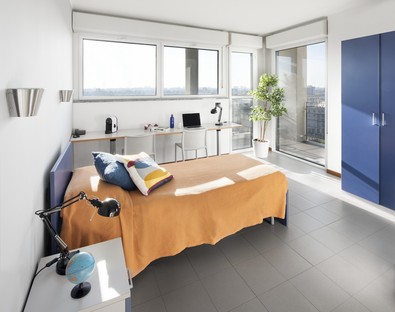 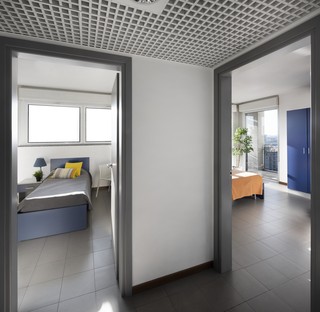 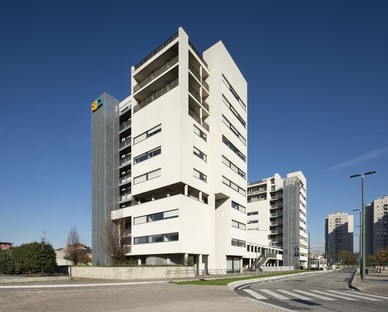 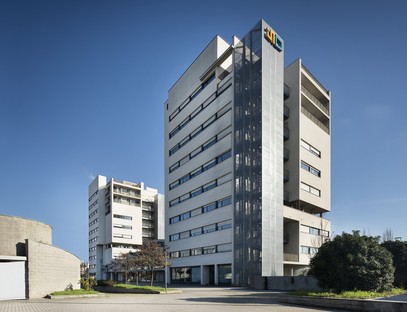 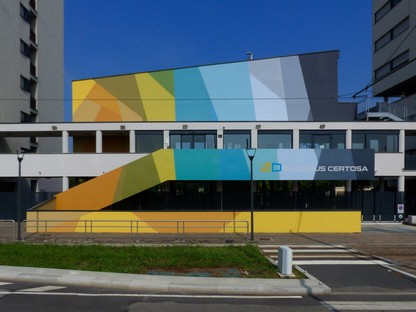 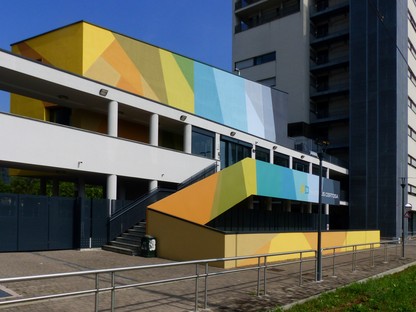 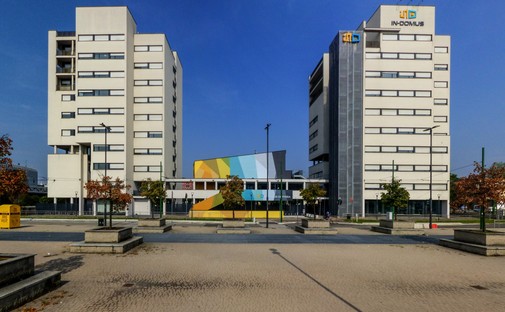