Francesco Pierazzi renovates a single-family home in a block of terrace houses built in London’s Notting Hill district 40 years ago, using a palette of colours and textures to amplify the perception of space in the maisonette interior. 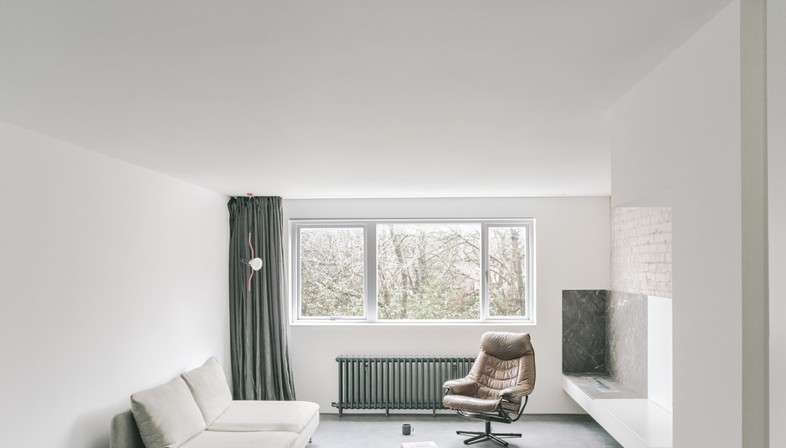 In this article we take a look at the world of architect Francesco Pierazzi by analysing his most recent and best-known residential project, known as the Maisonette in Notting Hill, London.
Of Italian origin, Francesco Pierazzi studied architecture in Florence and taught for a while in Italy before emigrating to Germany to work for Gerhard Aeckerle und Partners and then settling in London. Here he worked with a few British studios, including Brady Mallalieu Architects and Charles Tashima Architecture, before setting up his own practice in 2014, dedicated primarily to residential projects, with a particular propensity for reinventing the interiors of London’s terrace houses. He explains his way of designing by stating that it is mediated by the vibrant arts scene of recent years in South London, where plenty of greenery and a strong sense of community offer countless opportunities for growth.
Though his interests have been expanding recently, the focus of the architect’s study still remains the home: we might say Pierazzi is looking for a way to guide people toward a new perception of the space at their disposal, and therefore a different dwelling strategy, especially for city-dwellers.
The architect has worked on numerous projects for reclamation of existing homes, from Victorian row houses to more recent terrace houses, in which he has shown a particular ability to use spaces as ways of transforming urban and suburban lifestyles. His distinctive qualities include use of materials as elements in a palette for designing the empty spaces in homes, opening up unexpected forms of spaciousness and enriching rooms with new functions despite the small surface area available.
The maisonette in Notting Hill is an emblematic and particularly successful case. Built on two floors plus an attic, this single-family home is located in a block of terrace houses arranged around a courtyard built in the eighties and surrounded by greenery. The attic level with its sloped ceilings had been unused and neglected, but Pierazzi reclaims it to extend the available functions and living space, turning this renovation into an opportunity to redesign the whole house while staying within the project’s limited budget.
Being unable to alter the façades, Pierazzi worked exclusively on the limited indoor spaces on three levels totalling about 100 square metres, with the goal of making the home look bigger. His approach to a house of this type is based on a number of key points: first of all, right from the start, his project treats the three floors as a single whole, giving them all the same finishes and functional solutions. As Pierazzi notes, people move about a house in a sort of “choreography”, and the spaces in it must be designed with the same sense of continuity. In order to do this, he minimised both the thickness of the walls and circulation spaces in the layout of the house, reassigning the usable space to the rooms and utility areas in the home. He therefore uses the same grey vinyl flooring on all three levels, ensuring that there will be no interruptions between different functions. Pierazzi creates a contrasting palette of surface finishes: the plain bricks originally used to build the home are laid bare by removing layers of plaster so that the brick contrasts with the birch plywood panels used to cover the stairwell and some of the dividing walls and with more prestigious materials such as the old-fashioned cast iron radiators and the marble fireplace. Regretting the tendency to coordinate spaces so common in the architect’s work in recent decades, Pierazzi decides to focus on multiplicity here. In addition to basic white, he adds new colours and textures to the walls in order to identify particular spaces, however small, with different functions, already defined or definable: in the entrance, yellow defines the radiator niche, for example, creating an additional space for the mind’s eyes, outlined by use of colour.
The spatial progression on the upper levels is established using the colour red to emphasise the horizontal steel girders which emerged during work on the project and were left exposed. The white walls and floor-to-ceiling openings connected with both open spaces and tidy little refuges also expand our perception of the amount of space available. A dynamic synthesis is created between old and new, between simplicity and luxury, encouraging the people who will be living in the house to experiment with and appropriate space. Pierazzi claims he is inspired by the philosophy of Merleau-Ponty regarding the role of physical perception in our understanding of the world and connection with it: "I use the phenomenological approach by assuming that the body of the users / visitors of my projects will react and become active and stimulated if subjected to textures, contrast of materials, certain light conditions and position of sources of natural light, vistas that direct one's view. Or by creating very narrow spaces or corridors that lead to unexpected wide rooms: this way the body of the user / visitor can respond to the alternation of contraction and expansion.” 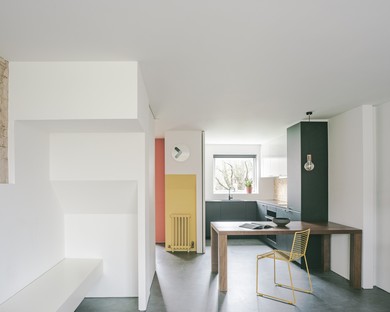 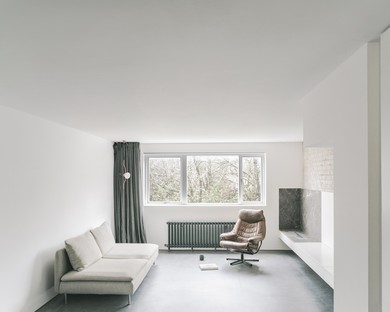 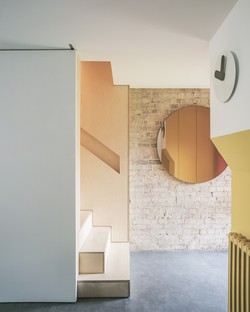 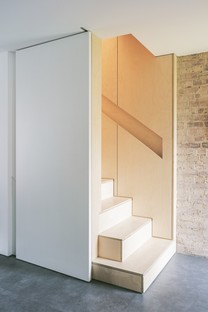 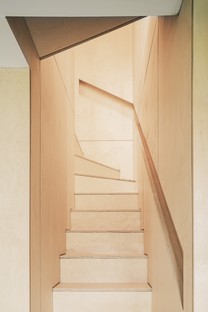 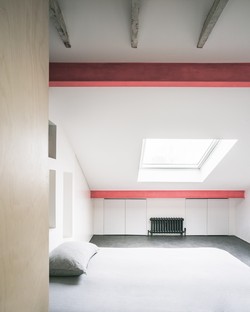 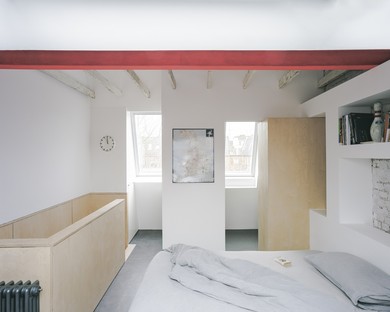 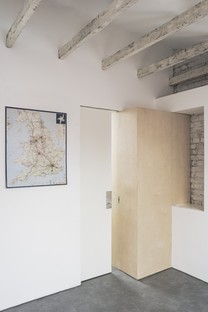 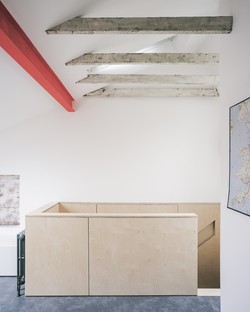 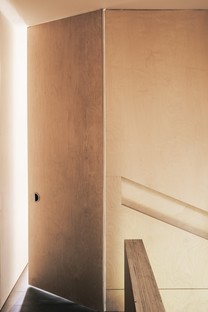 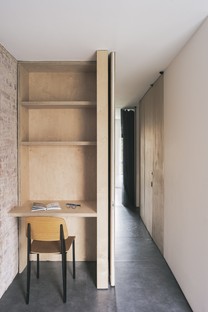 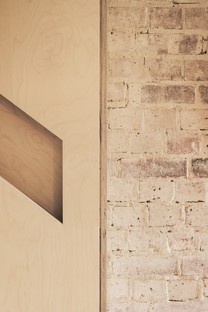 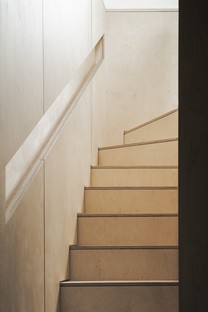 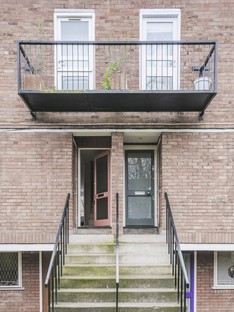 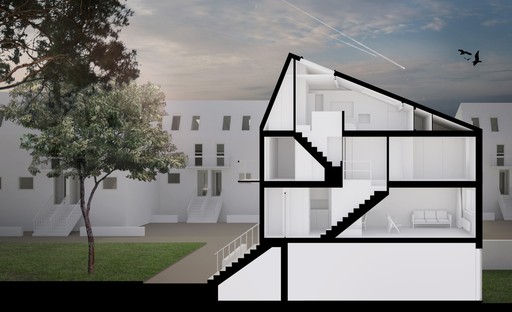 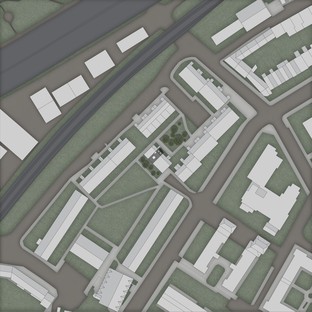 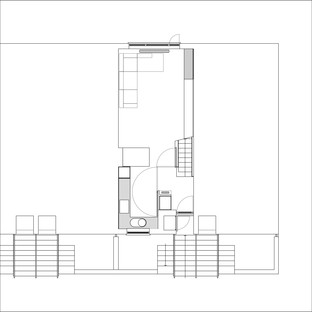 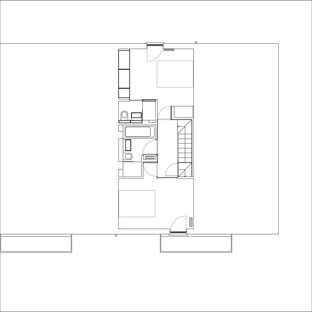 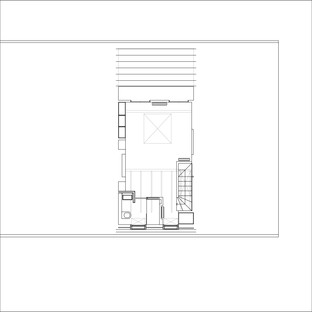