July 31 saw the official opening in Bangkok of Apple Central World, the second and largest Apple store in Thailand. The building in Ratchaprasong, located at one of the Thai city’s iconic intersections, appears almost sculptural. The glass structure and large cantilevered wooden roof is supported by a central pillar. The project was designed by Foster + Partners design studio in collaboration with the Apple team and local architectural practices F&P (Thailand) Ltd. and Architects 49 Ltd. 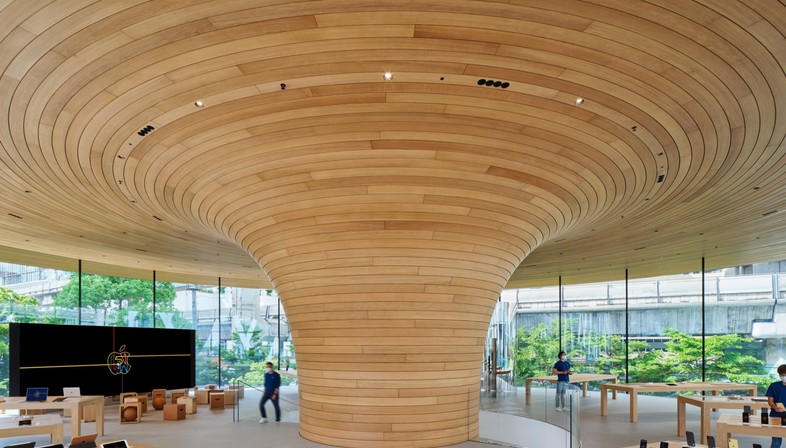 A few weeks after the official opening of Apple Sanlitun, the eponymous Apple store in a vibrant district of Beijing, a new Apple store opened to the public, once again designed by Foster + Partners architects practice. July 31 saw the official opening of Apple Central World in Bangkok, the second and largest Apple store in Thailand. The building stands at Ratchaprasong, the Thai city’s famous, iconic intersection formed by Rama I and Ratchadamri roads. Located at the southern end of the eponymous Central World Square, the new store appears sculptural. Apple Central World is a glass structure with a large, wooden cantilever roof supported by a central pillar. Due to its location and functions, the store will be a major social focus for residents and an inviting backdrop for New Year celebrations and other annual parties held in the square. A short distance from the store lies the famous Erawan shrine, an important religious destination for locals and tourists alike. The new store project was created by Foster + Partners design studio in collaboration with the Apple team and local architectural practices F&P (Thailand) Ltd. and Architects 49 Ltd.
The two-storey building is a 24.4m diameter glass drum, whose form has been generated by a 360° Bezier curve, a parametric curve used in computer graphics. Located in a vibrant urban setting surrounded by vehicular and pedestrian routes, access to the building is via two different entrances. The first, on the ground floor, faces the square and has an external area surrounded by a ring of large trees with benches for people to rest. The second entrance, on the first floor, is via a new bridge which connects the elevated BTS walkway, an important link to Skytrain BTS’ SIAM station, the large Central World Plaza shopping mall, Ratchaprasong intersection and Chit Lom station.
Inside, the building’s two floors are connected by a helical staircase cantilevered from the central wood-clad pillar. The cantilevered stairway is reminiscent of turbine blades, with solid blocks of highly polished stainless steel, which confers a sculptural quality. Full-height windows blur the boundary between inside and outside. From inside, they permit a 360-degree view of the lively urban area and from outside they reveal the store’s calm interior. The large circular roof projects out 3 meters, shading the facade and improving comfort in the sales area.
Apple Central World includes many of the typical areas in Apple stores, such as a Forum and Boardroom. The Forum is the setting for holding Today at Apple, a program of events which involves some of the best local artists, musicians and creative people. On the ground floor is an area showcasing independent exhibitors where customers can discover selected merchandise and accessories. Finally, the Boardroom is an area where local entrepreneurs, developers or business owners can receive personalized advice from the Apple team. 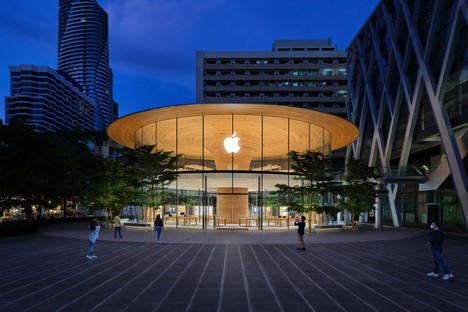 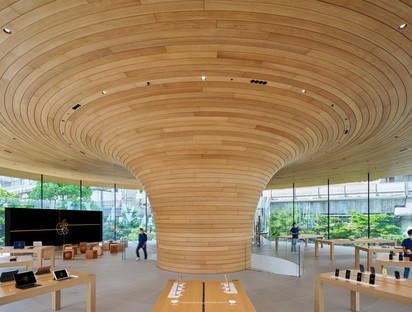 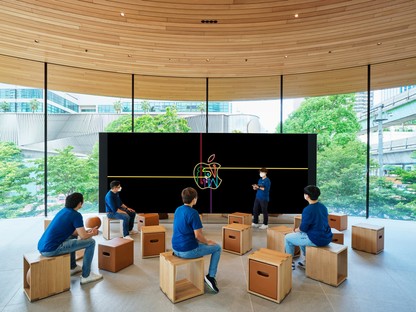 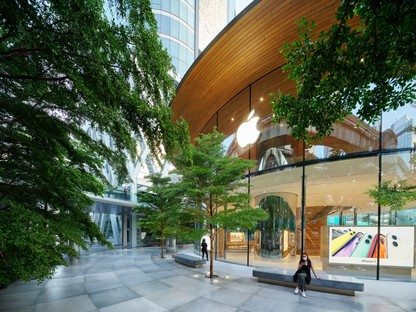 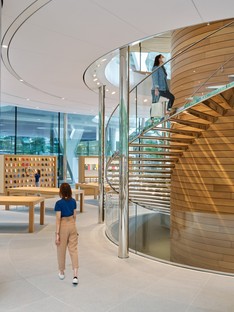 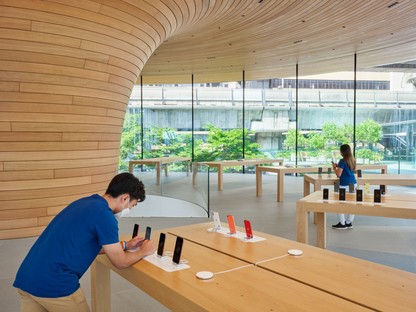