The Milano Luiss Hub is the first project completed in Milan by the Fabbricanove firm, directed by architects Enzo Fontana and Giovanni Bartolozzi. A perfect example of how architecture can be used as a medium for recovering an urban void, to transform it into a pulsating place of life and innovation, a new propulsive centre for urban regeneration. 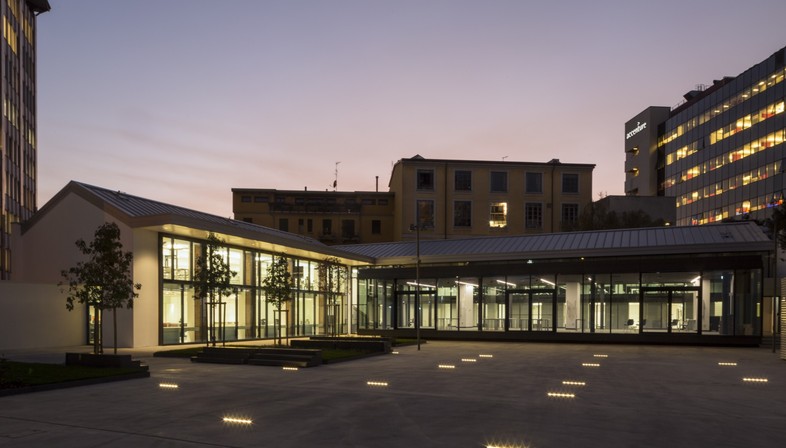 In Milan, between Corso Como and the Porta Garibaldi station, the Fabbricanove architecture studio completed the Milano Luiss Hub project, the “first digital manufacturing laboratory”. A new space dedicated to training, to business development and to creative activities commissioned by the LUISS - Libera Università Internazionale degli Studi Sociali "Guido Carli" private university in Rome and born thanks to the synergy between the prestigious Roman university with the Municipality of Milan, the Brodolini Foundation and the ItaliaCamp Association.
The project designed by the Fabbricanove studio, directed by architects Enzo Fontana and Giovanni Bartolozzi makes it possible to recover an important urban void, transforming it into one of the most attractive spots in the city. The Hub is located in close vicinity to the Giangiacomo Feltrinelli Foundation and Milan’s new Porta Nuova business district. 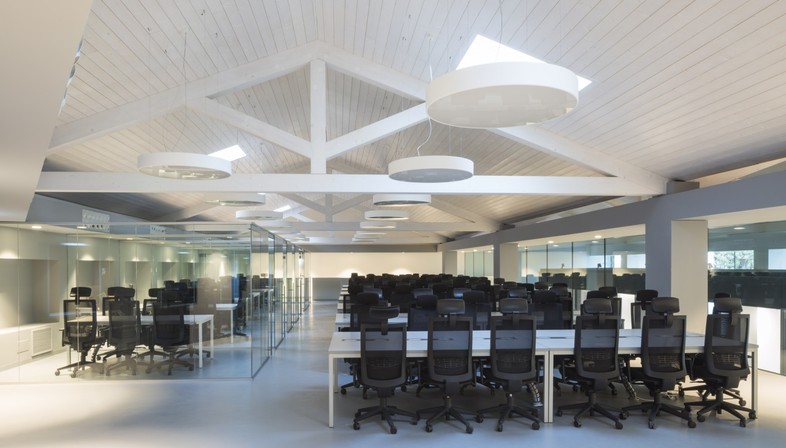 The area owned by the municipality of Milan was occupied by a former garage and a goods warehouse. The site was in a full state of abandonment and closed with respect to the context, even though it was located in one of the most attractive and lively areas of the city. The original 1-storey building included a large inner courtyard and consisted of two L-shaped structures. The degradation of the structures inspired the architects to make a radical choice and demolish them, saving only the essence of the places through a few studied elements reminiscent of the original complex. A number of brick pillars, for example, that were originally internal to the structure, are now visible through the transparent façade of the FabLab. Or the wooden trusses of the original roof, which the new design has brought back to life in white. The architects worked on a double register: on the one hand, the current forms echo the memory of the past, such as the L-shape of the original layout; on the other, materials such as glass, steel and cement and new colours that render the structure immediately recognisable, as an expression of a contemporary language. 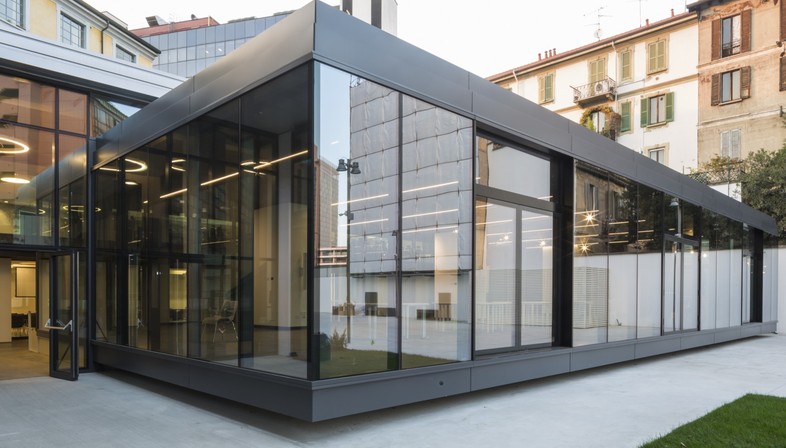 As the architects of the Fabbricanove firm explained, “the goal was to reproduce an urban microcosm, with all its internal dynamics, within the city”. The L-shaped profile of the original layout has therefore become the “border” on which the new volumes are planimetrically arranged, while the use of glass for the façades made it possible to establish an osmotic relationship with the facing garden and with the urban context in which the Hub is inserted. There are no more dividing lines or opaque walls to separate the structure from its surroundings. Indeed, the new building is not afraid to show itself and to exhibit to the city the activities in progress, while at the same time internalising its vitality and energy.
Architecture thus becomes the first promoter of the innovative program enclosing the Hub, distinguishable in three essential functions to which the three main volumes correspond: the Education Centre focused on training activities, the FabLab dedicated to rapid prototyping and digital manufacturing and the Business Accelerator aimed at providing support and helping with the development of startups. The so-called Teca (showcase) is located in front of the latter. This fourth and predominantly glazed volume stands about 70 cm from the ground because, as its name implies, the space has been designed to host events and temporary exhibitions of the products made. A genuine showcase over the city and the element that enables the interaction with what happens inside the Hub. 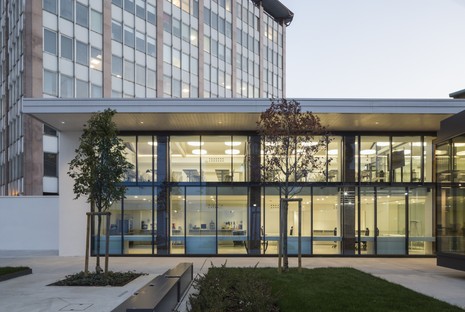 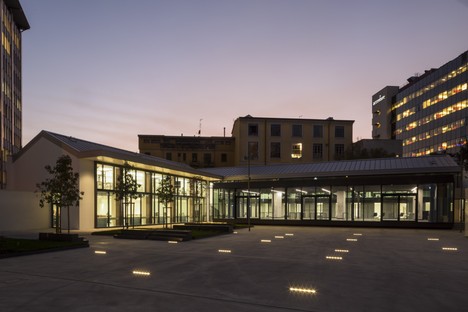 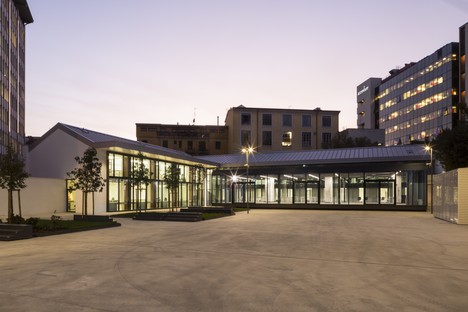 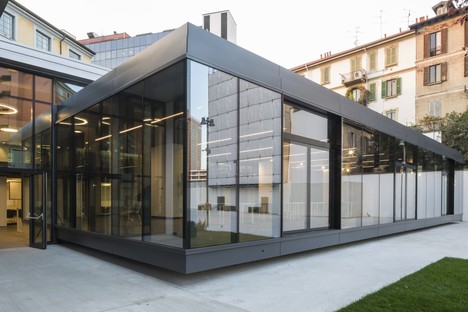 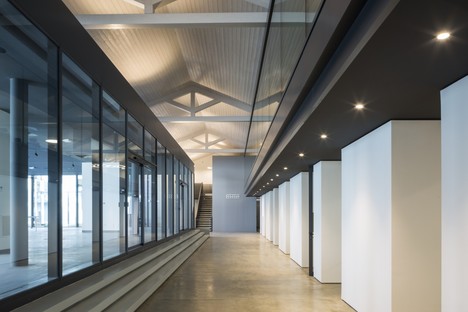 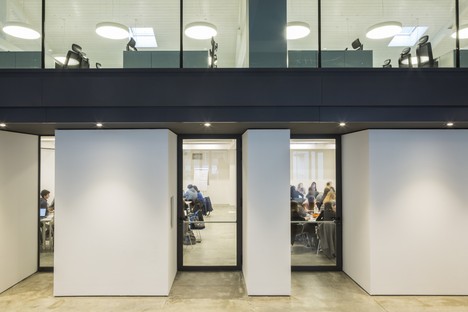 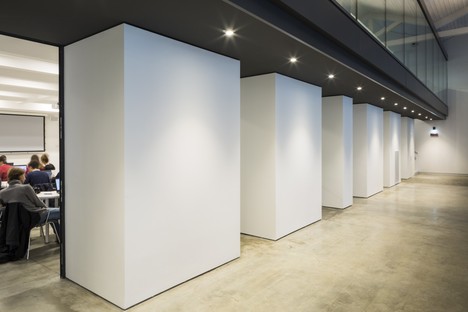 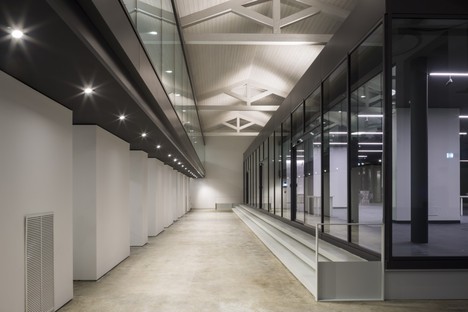 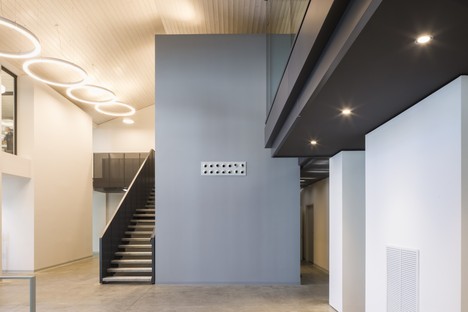 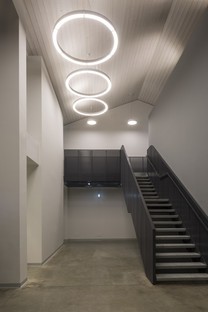 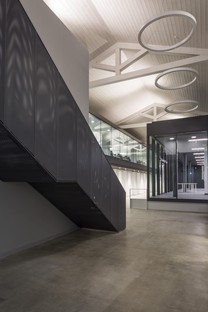 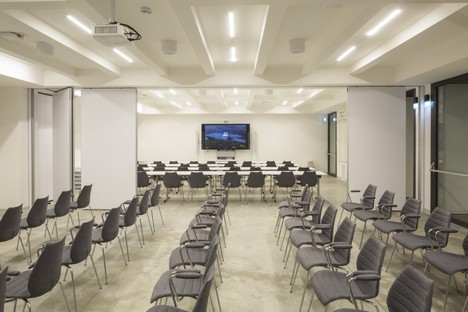 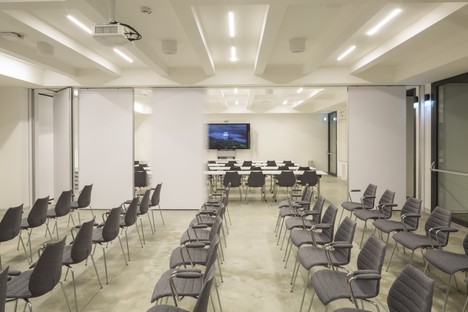 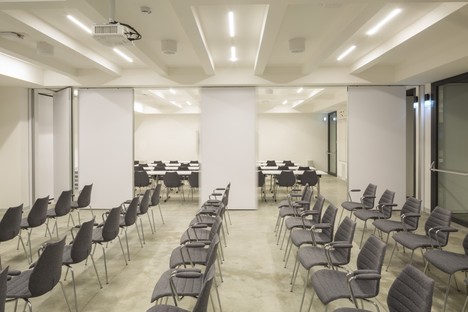 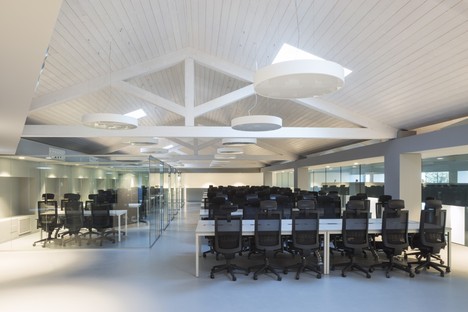 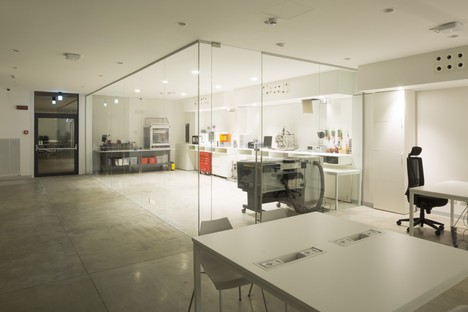