Dominique Perrault Architecture and MAD at the Echigo-Tsumari Art Triennale

On the occasion of the 2018 Echigo-Tsumari Art Triennale, which will end on 17 September, MAD architectural studio restored with artistic spaces the Kiyotsu Gorge tunnel of Tokamachi, an area of outstanding natural beauty, while the Dominique Perrault Architecture studio designed the Drape House pavilion. 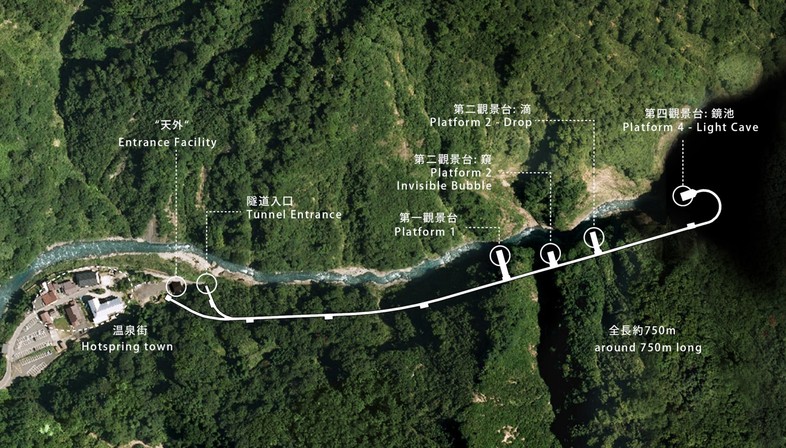 Since 29 July, Japan has been hosting the Echigo-Tsumari Art Triennale, which will end on 17 September. It is one of the most important events in the world dedicated to contemporary art.
The Triennale was created in 2000 by Fram Kitagawa and takes place in the region of Echigo-Tsumari, more specifically in the so-called Art Field, a 760-square-kilometre area comprising approximately 200 villages hosting the works of about 160 artists. The works of art are realised with the collaboration of the local population in the fields of this area, in its forests, or in abandoned places that are renovated for this occasion, such as empty houses, schools, or even tunnels, as it was the case with the MAD studio. All works face a common theme, “human beings are part of nature”, and art is indeed what allows people to relate with nature.
In actual fact this is a place of natural interest, where agriculture follows traditional techniques. During the winter, its mainly mountainous territory is among the snowiest areas of Japan.
World-renowned architects also collaborated on the occasion of the 2018 Triennale, including Dominique Perrault Architecture studio and architect Ma Yansong's MAD studio. Their interventions were very different from one another. 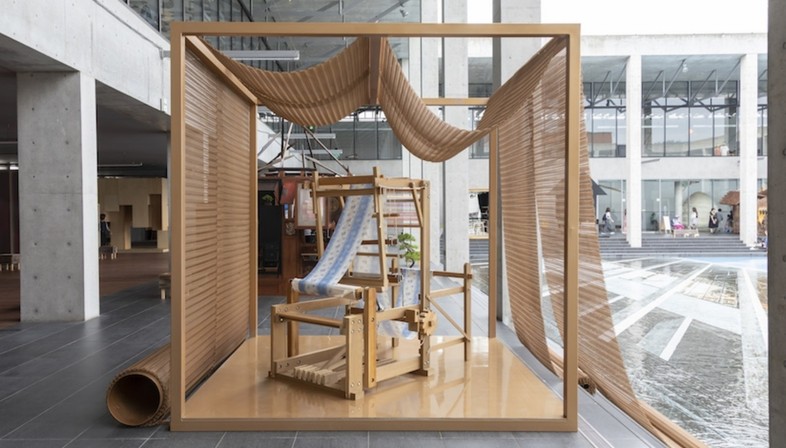 Architect Dominique Perrault designed the Drape House pavilion for collective exposition “Hojoki Shiki”. It is composed by small, cubic pavilions with a 2.73-meter side. The pavilions create a microvillage in the external gallery of the Museum of Contemporary Art of Tokamachi, and host tiny installations or artistic performances in their inside. The pavilion is composed of a metal frame whose top part and sides are covered by a bronze-coloured drape. The fabric of the drape filters the sun rays, creating plays of light and shadow and evoking the artisanal work that is the very heart of the Japanese architectural tradition. 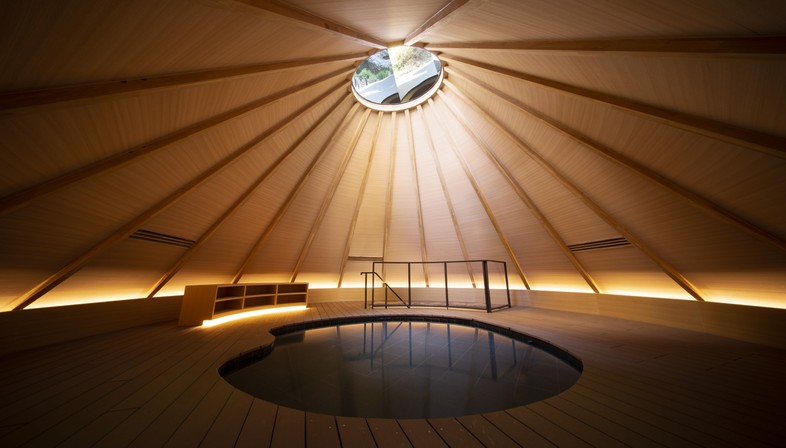 For the 2018 edition of the Echigo-Tsumari Triennale, MAD architectural studio, founded by architect Ma Yansong, restored the tunnel of the Kiyotsu Gorge of Tokamachi, a 750-metre tunnel crossing the rock formations of one of the most beautiful gorges of Japan, as well as one of its most outstanding areas of natural beauty. The renovation involved the creation of some permanent artistic spaces inside the historic tunnel, which in this way was transformed into the “Tunnel of Light”.
The architects selected some areas along the tunnel to design artistic spaces inspired by the five elements of nature (wood, earth, metal, fire and water), where the relationship between men and nature could be reconsidered, and where fantastic views on the natural surroundings could be enjoyed. 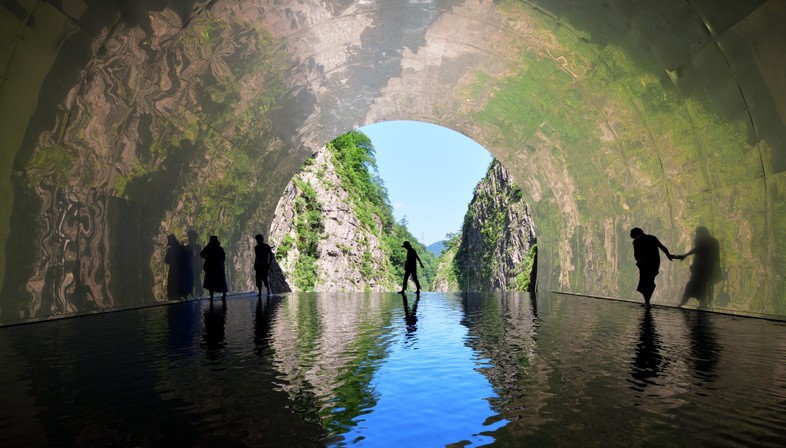 “Periscope” is the starting point of the path. It is a small, wooden structure hosting a cafeteria and a souvenir shop on the ground floor and a wellness centre on the first floor. Its name, “periscope”, is due to the system of mirrors that, thanks to the circular opening of the roof, reflects inside the structure the surrounding nature. “Expression of Color”, related to the earth element, is at the entrance of the gallery. It is fit with a series of lights of different colours, combined with evocative music. “Invisible Bubble” and “The Drop” are devoted to the metal and the fire elements respectively, while “Light Cave” can be found at the very end of the path. It is a semi-polished stainless steel tunnel reflecting the surrounding nature in its enclosed space. The pool of water on the floor of the cave contributes to creating the illusion of an infinite nature. 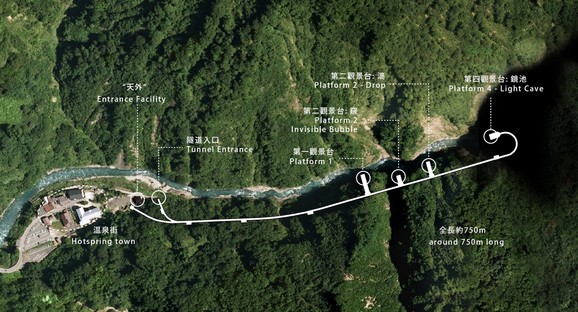 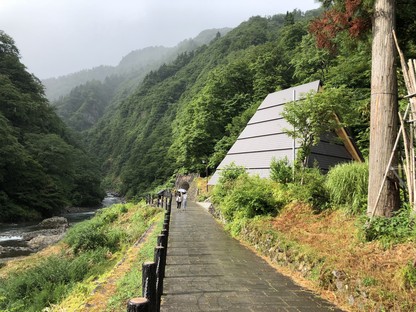 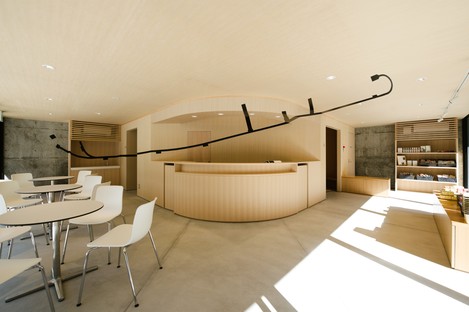 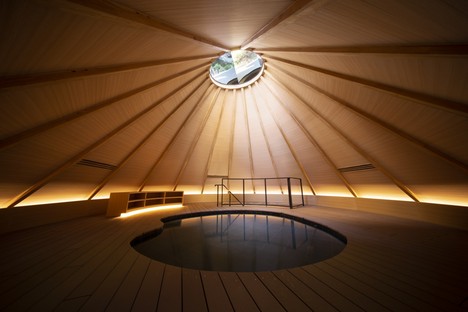 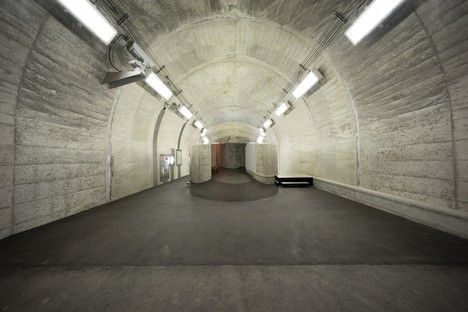 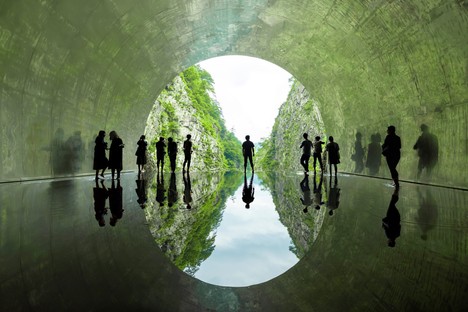 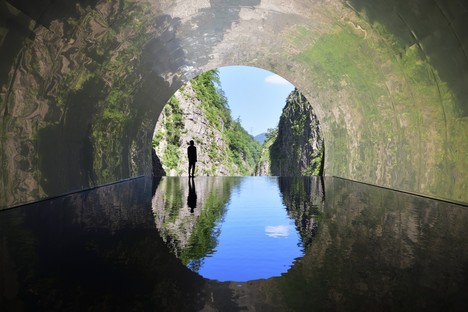 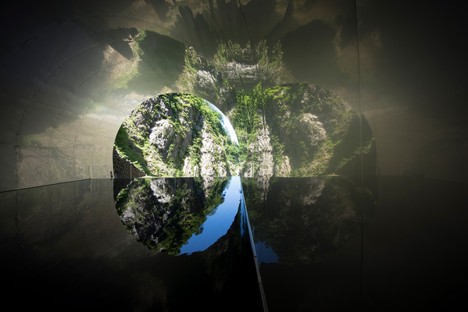