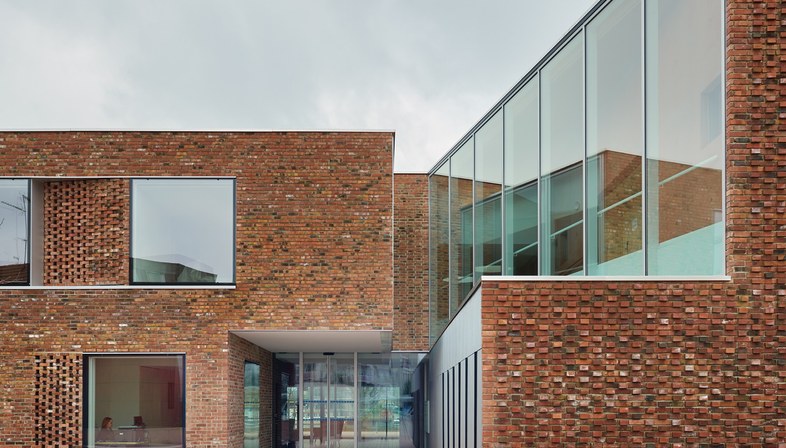 Early in 2013 the municipality of Huningue, in the Grand Est of France, held a design contest for a new seniors’ centre to be located on a lot between the Rhine and the canal that flows through the city. Dominique Coulon & Associates won the contest and came up with a project in which the focus is on the landscape.
Huningue is a village of less than 7000 people known for its exceptional geographic location. Though a border is often merely a matter of convention, and does not always determine particular changes in lifestyles, society or landscape, a town with a view of three different nations is still something special. Huningue is located right on the border between France, Germany and Switzerland, a boundary marked by the Three Countries Bridge and the passage of the Rhine River on the eastern side of the town. In contrast with the prevalently urban land on the French side of the border, the banks of the Rhine are largely undeveloped.
Dominique Coulon takes this as his starting point for designing a seniors’ home which sets a new benchmark for a building intended for residents of this kind.
In formal terms, the Huningue seniors’ centre does not reflect the characteristic features of the architecture of the region, but is a product of contamination of different styles and building materials. Coulon therefore decides to create a new image for the seniors’ residence, with a flat roof, a reinforced concrete frame and a bare brick exterior, producing a building in a generic northern European style, in which the details of the interior and exterior are guided by its function and by the architect’s sensitivity to the needs of this type of user.
The big windows, which are practically floor-to-ceiling glass on the side facing the Rhine and the little gardens on the lot, serve the specific purpose of bringing as much light as possible into the individual residences and common areas, to stop residents from shutting themselves up in a dark shell of solitude. The broader view from the little apartments and the community spaces permitted by the large central void of the staircase leading to the first floor also symbolically represents new prospects for life.
The building’s layout, designed with two volumes translated one over the other, has a permeable space in this central void, with glass on the eastern and western sides providing a visual link between the main entrance and the terrace over the Rhine at the back. The staircase located here is the fulcrum of the architecture, designed in Coulon’s style as a solid volume, not just a passageway but a space in its own right in which people can spend time, get together and look around. The soft red concrete picks up on the colour of the terra cotta floor tiles, attracting the eye and inviting it to rise higher to contemplate the vertical void between the two levels. This ensures direct communication between the ground floor, primarily used for community events, and the first floor, where most of the private apartments are located. The rooftop patio is a glass cube suspended over the hall, almost like a geometric figure complementary to the staircase, which channels light and distributes it over both levels.
The seniors’ centre has 24 permanent residents, who live in apartments measuring 50 square metres divided into a living area, bathroom and bedroom, and also have a series of community spaces available for their use including a restaurant, a computer room, a hobby workshop, a room used for variety of activities, a vegetable plot and a petanque field. The underground level contains a parking garage for staff and caretakers.
The warm colours in the public areas, predominantly reds with natural untreated wood, give way to the neutrality of white walls in the apartments, which guests can decorate as they wish. A few items of furniture selected with care for the kitchen and living room suggest a style which guests can interpret in their own way. Each apartment has at least two windows, one facing outside and one overlooking the interior of the building. The design of the glass is very interesting, with a pronounced intrados which becomes a seat and a surface on which to place personal items. The reveal on one side corresponds to a brick sunbreak on the outside, adding motion to the building’s façade with simple use of shadows. The inside of the reveal contains a panel which can be opened to let in fresh air. 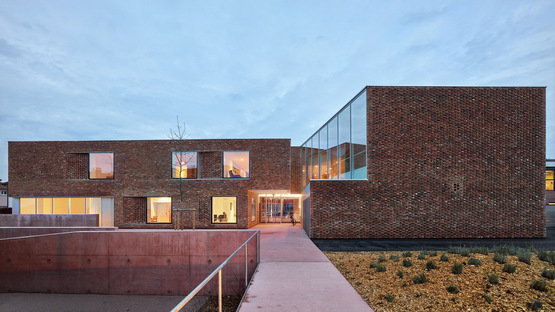 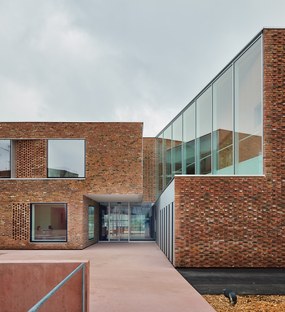 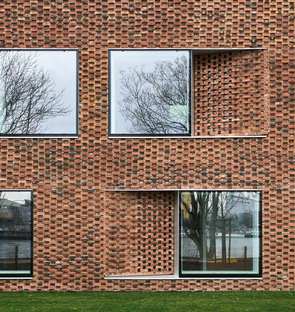 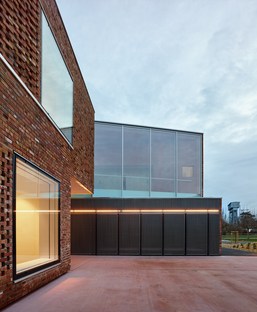 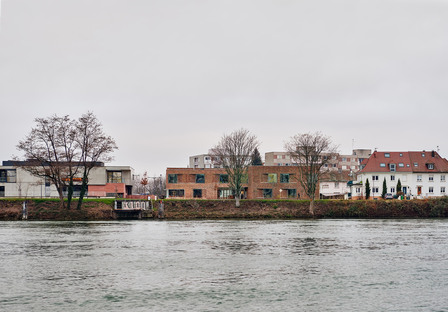 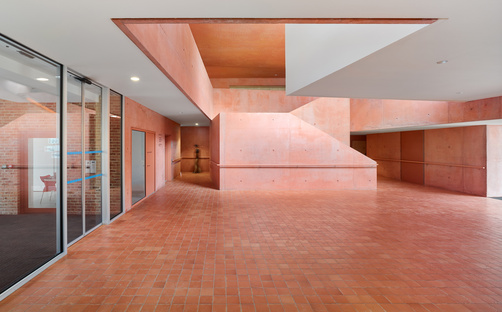 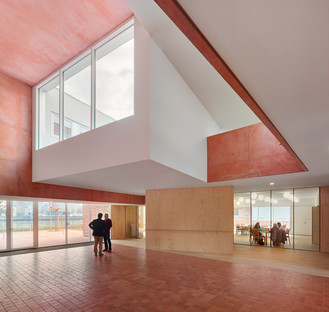 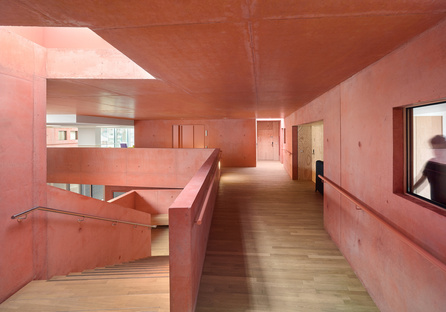 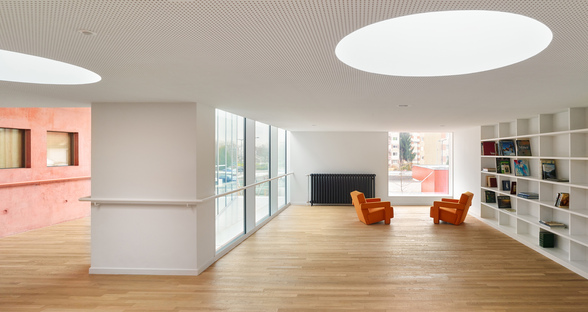 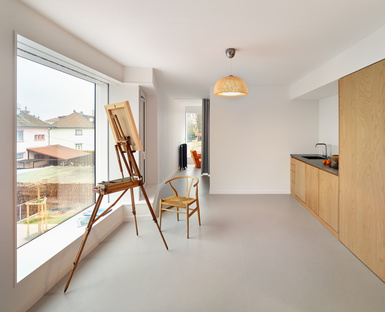 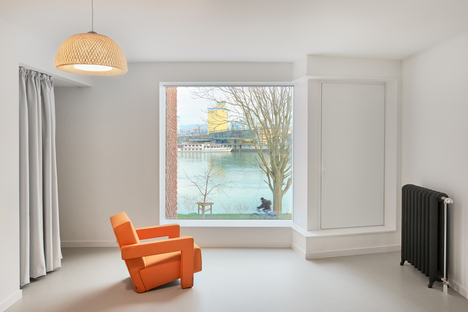 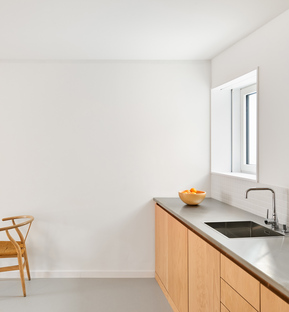 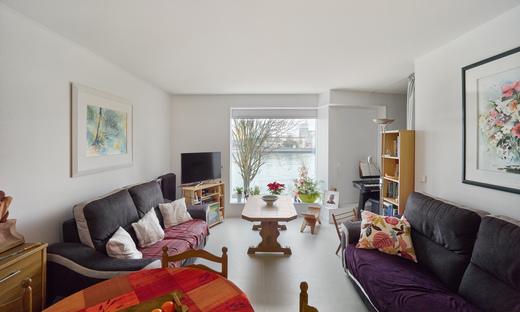 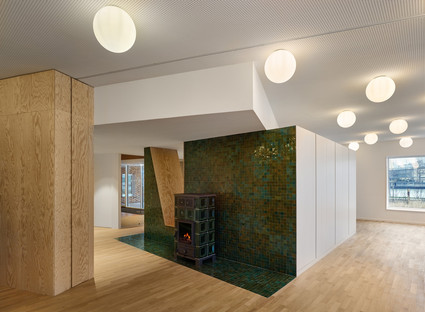 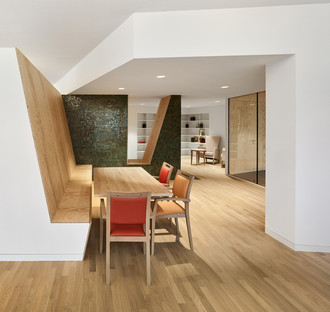 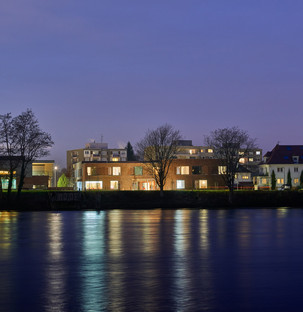 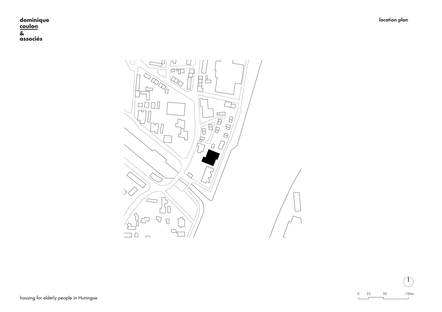 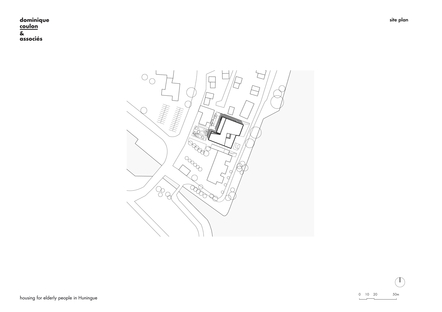 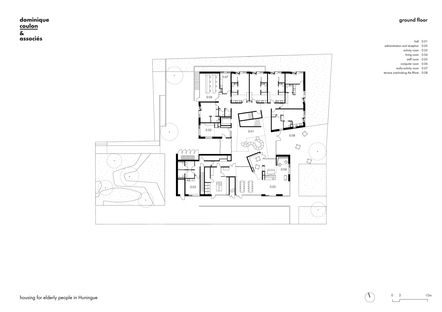 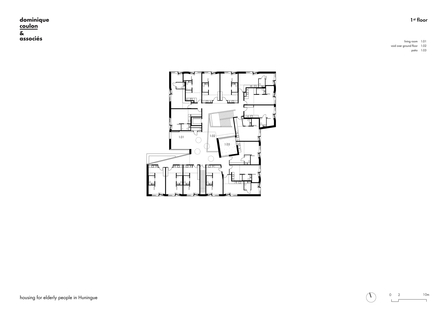 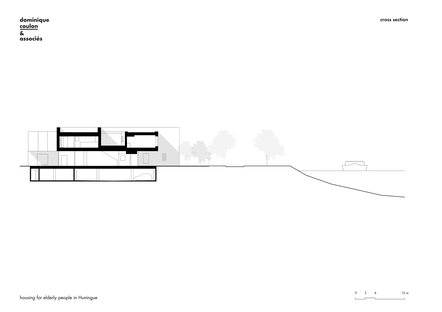 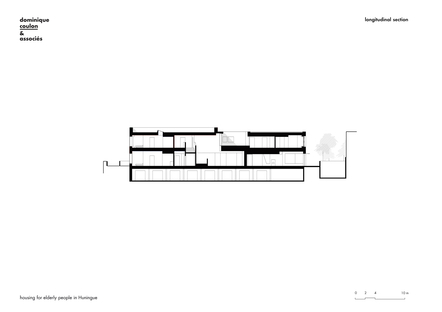 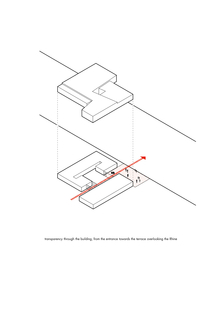 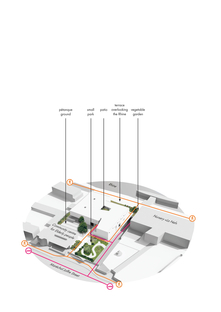 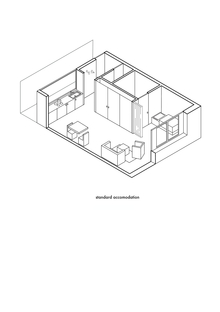